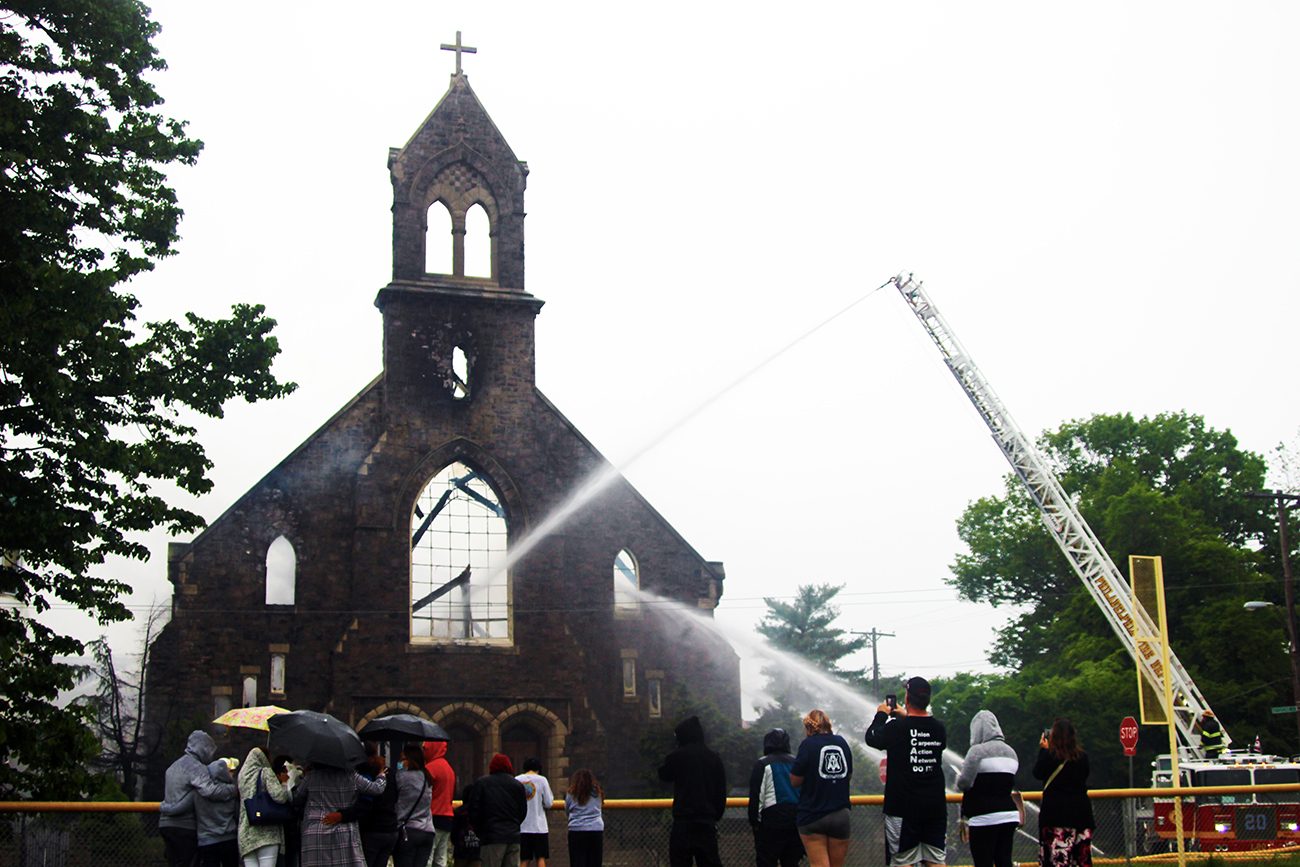 Firefighters battle a blaze at the former St. Leo the Great church in Philadelphia's Tacony section as area residents and former parishioners watch, May 9. The former worship site, which closed in 2018 following a parish merger five years earlier with Our Lady of Consolation, was completely gutted. (Gina Christian)

UPDATED — Catholic residents of a Northeast Philadelphia neighborhood continue to mourn the loss of a church once known as “the heart of Tacony,” destroyed in a May 9 blaze that federal investigators have now ruled the result of arson.

Early that evening, fire ravaged the former St. Leo the Great Church at Keystone and Unruh Streets, gutting the structure. The blaze, which originated in the church, also severely damaged the former parish rectory, home to permanent diaconate candidate Pasqual Mota and his family, who had purchased the residence from the Philadelphia Archdiocese in 2016.

On Friday, Philadelphia Fire Department Battalion Chief Christopher Beale told CatholicPhilly.com he believed the Mota house, which ignited from the church fire’s radiant heat, was “salvageable,” although “the whole third floor is a mess.”

Yesterday, the Philadelphia Fire Marshal’s Office and the U.S. Bureau of Alcohol, Tobacco, Firearms and Explosives (ATF) announced the fire had been deliberately set, although officials did not specify the details of their findings.

Through local media, ATF Supervisory Special Agent Charles Doerrer said the new owner — who according to authorities is cooperating with the investigation and is not a suspect — had planned to lease the former church either to another congregation or a performing arts group.

Speaking to CatholicPhilly.com by phone on May 14, real estate developer David Damaghi confirmed he had bought the church “on or about 30 days ago,” having purchased the former St. Leo School “about six months ago.”

Damaghi, who is based in New York, said he “had an arts and performance center that was about to go into” the shuttered church.

He said “under the circumstances” he is doing well in the wake of the disaster, since “everybody is alive.”

A $20,000 reward is being offered through those agencies for information on the person or persons responsible for the blaze. Tips can be submitted to the ATF at 1-888-ATF-TIPS (888-283-8477), via email at ATFTips@atf.gov, through the ATF website or to the Philadelphia Fire Marshal’s office. Mobile device users can also forward details to the ATF with the ReportIt® app, available on both Google Play and the Apple App Store, or by visiting www.reportit.com.

The church fire was placed under control two hours after it broke out around 5 p.m. by some 100 firefighters, with no injuries reported, said Philadelphia Fire Department Deputy Chief Vincent Mulray, who spoke to media on the scene.

Mulray said the blaze had resulted in “a total loss for the church,” with another fire official later noting vibrations from the nearby Amtrak train line would likely weaken the surviving structure.

Crews began demolishing St. Leo’s iconic bell tower the next day, and the remainder of the church is steadily being dismantled.

Following a July 2013 merger with nearby Our Lady of Consolation Parish, St. Leo had been a worship site but due to high maintenance costs the church was closed in December 2018 and, in canonical terms, “relegated to profane (non-ecclesiastical) but not sordid use.”

The building was sold on April 6 to the new owners, said Father Joseph Farrell III, St. Leo’s final pastor and currently pastor of Our Lady of Consolation.

The parish has organized fundraising efforts for the displaced Mota family, who are safe but have been alternating between “staying with family and staying at hotels,” said Father Farrell.

He encouraged those wishing to assist the Motas to call the rectory at Our Lady for Consolation (215-333-0442).

On Thursday, parishioners held a “spontaneous” rosary prayer service in Disston Park across the street from the ruins, he said.

Designed by Philadelphia architect Frank R. Watson and built in 1884, St. Leo Church was enrolled in the Philadelphia Historical Commission’s Register of Historic Places in May 2019. Those who had just purchased the building “were going in and out every now and then,” Father Farrell said, and had plans to “lease it to religious groups.” 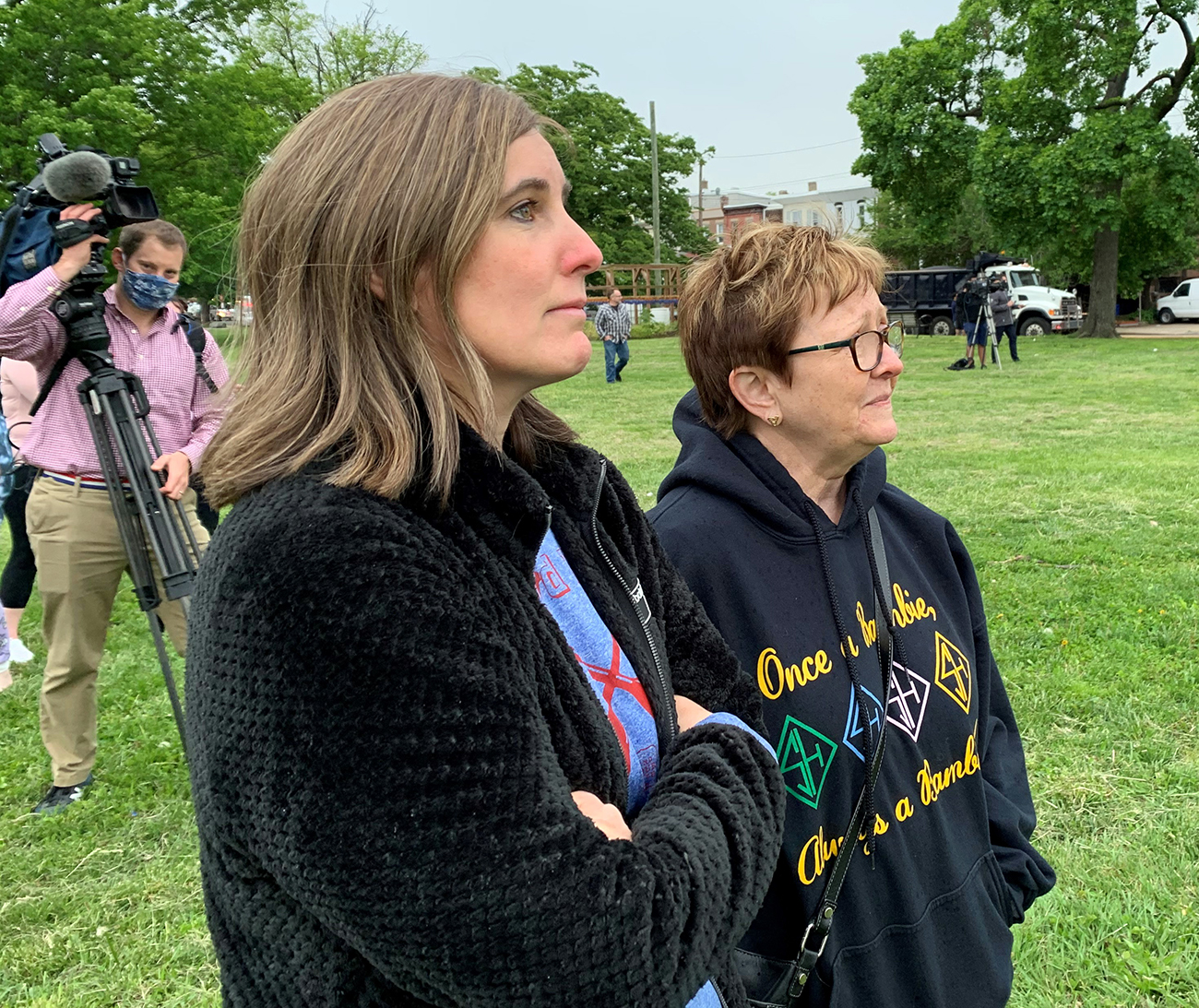 The sight of his previous church engulfed in flames was “like a punch in the gut, just unreal,” said Father Farrell, who “could see the smoke from down the street” as he hurried from Our Lady of Consolation to St. Leo moments after receiving word of the blaze.

He was joined by a number of current and former parishioners, who gathered in the park to watch and weep for the church they and their families had called their spiritual home for generations.

“I found my faith in this church, in these pews,” said Maureen Nemchik, a parishioner since 1980 who was married at St. Leo in 2006.

Now living in New Jersey, Nemchik still attends Our Lady of Consolation, and “scrambled” across the bridge as soon as a friend advised her of the fire.

“It was just a beautiful place, with beautiful people,” she said through tears. “I have such wonderful memories of St. Leo. This is a huge loss for the community.” 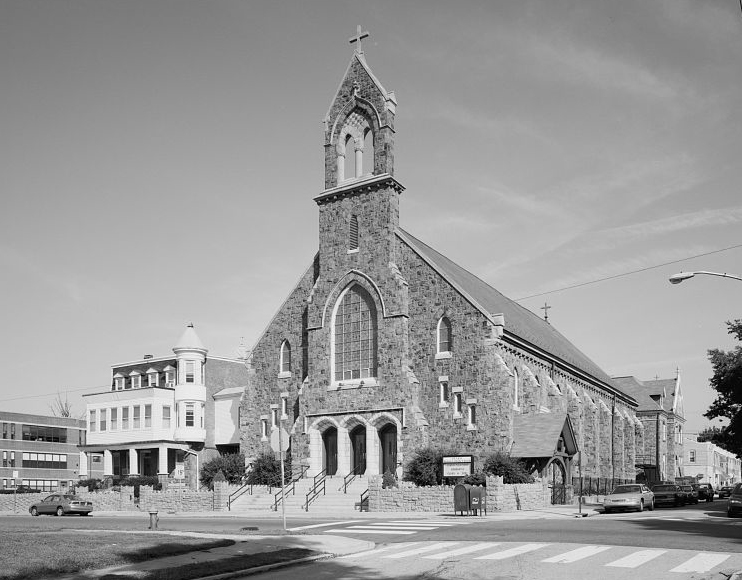 The former St. Leo the Great Church, pictured in this undated photograph, was destroyed by a May 9 fire only weeks after the building (closed as a worship site in 2018) had been sold to new owners. (Library of Congress)

Fellow parishioner Eladio Olivo said he ran to St. Leo when a neighbor alerted him.

“I just fell to my knees,” he said. “Even though it’s not our church anymore, we still feel this. So many things happened here, so many beautiful moments, so many generations got baptized, got married … it’s really devastating.”

Olivo pointed to a nearby railroad overpass featuring an image of St. Leo’s facade and a description of the church as “the heart of Tacony” – a moniker that is well-deserved, said Charles Tschopp, a 1981 graduate of St. Leo School and now principal at Christ the King School in Philadelphia.

The stones of the church themselves speak to local history, he said, noting many were salvaged from the Disston Saw Works, the 19th-century world’s largest manufacturing facility of its kind, which was located just blocks away along the Delaware River.

“The reason there was no bell in St. Leo’s belfry is because they didn’t want them waking up the shift workers,” Tschopp said. 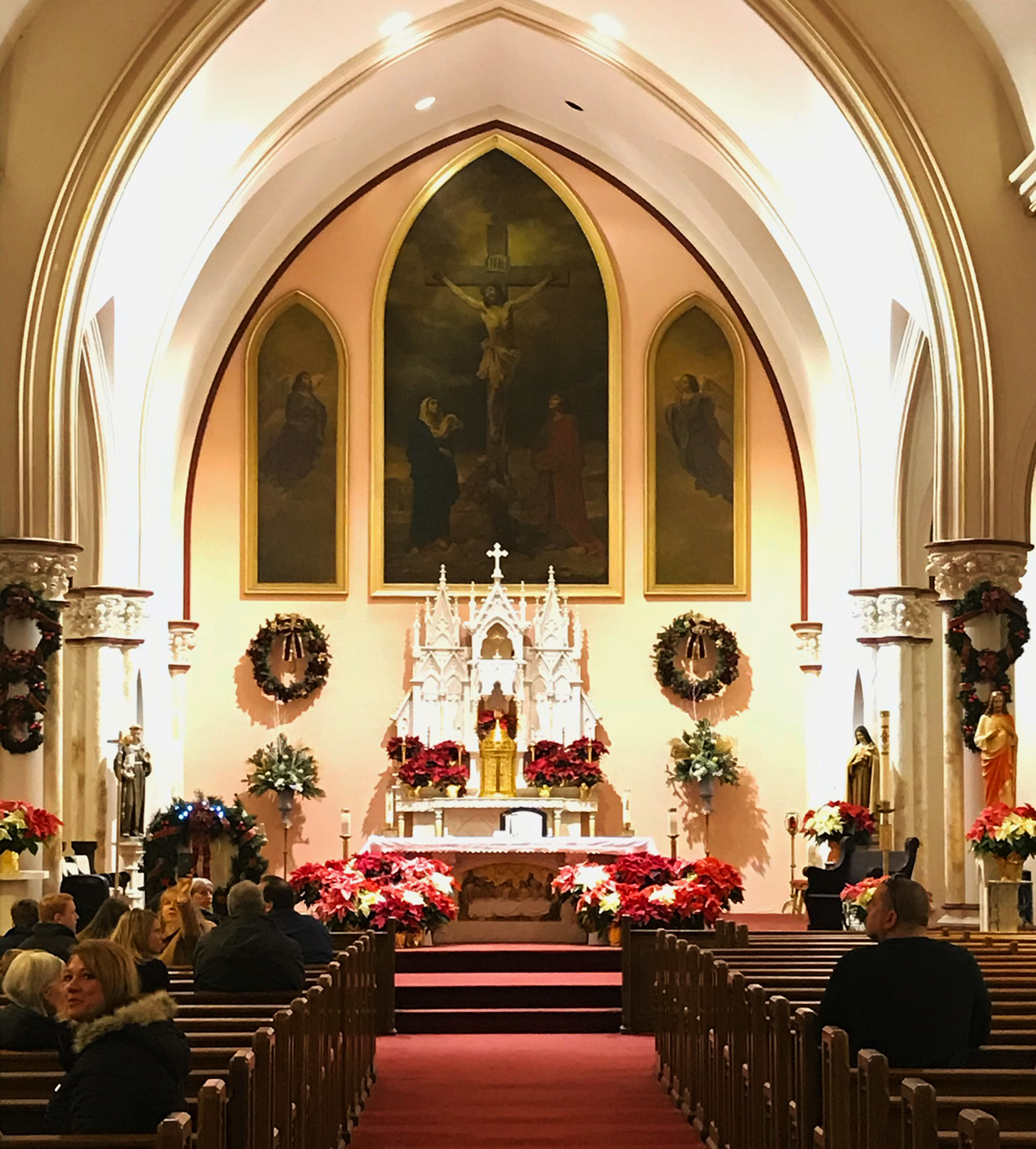 The interior of the former St. Leo the Great Church in the Tacony section of Philadelphia is seen in this undated photograph. The structure was destroyed by a May 9 fire; the parish itself had been merged with Our Lady of Consolation, and the St. Leo worship site was closed in 2018. (Photo courtesy of Charles Tschopp)

That kind of lore was carried through the “five, six, seven generations (who) have come through here,” he said. “A lot of people would come back for Masses.”

While Tschopp admitted “the church is the people, not the buildings,” he stressed “the buildings do mean something.”

“(Churches) are the presence of the Lord in the midst of the darkness,” she said. “Once you extinguish that light … things just aren’t the same.”

City Councilman Bobby Henon, whose office is a short walk from St. Leo, reflected it was “a sad day for Tacony.”

“We lost a piece of history,” he said as he watched firefighters train their hoses on the flames. “But faith is built upon community … and I believe that faith will heal the community.” 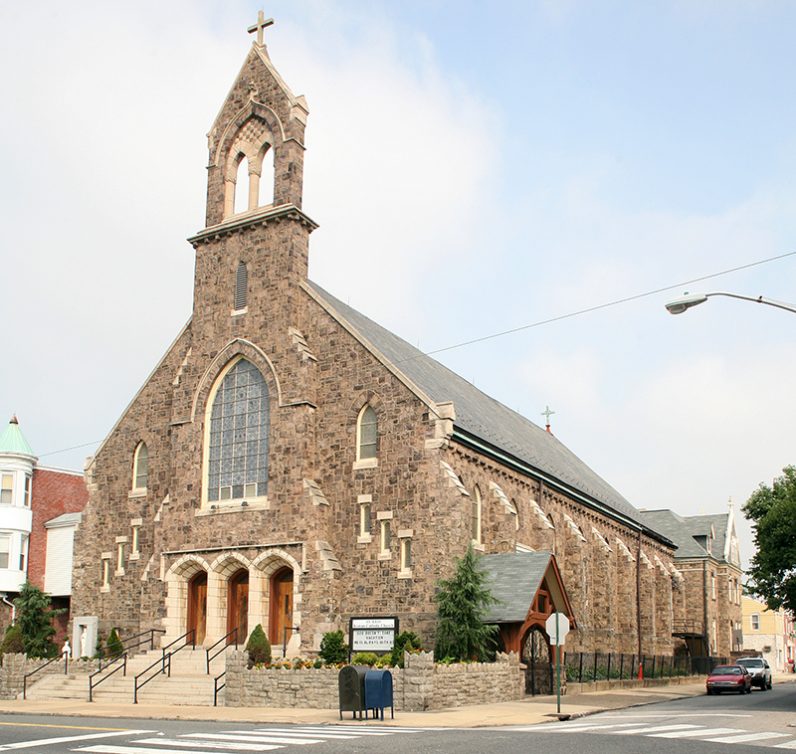 St. Leo Church in Philadelphia’s Tacony section is shown in a 2006 file photo.