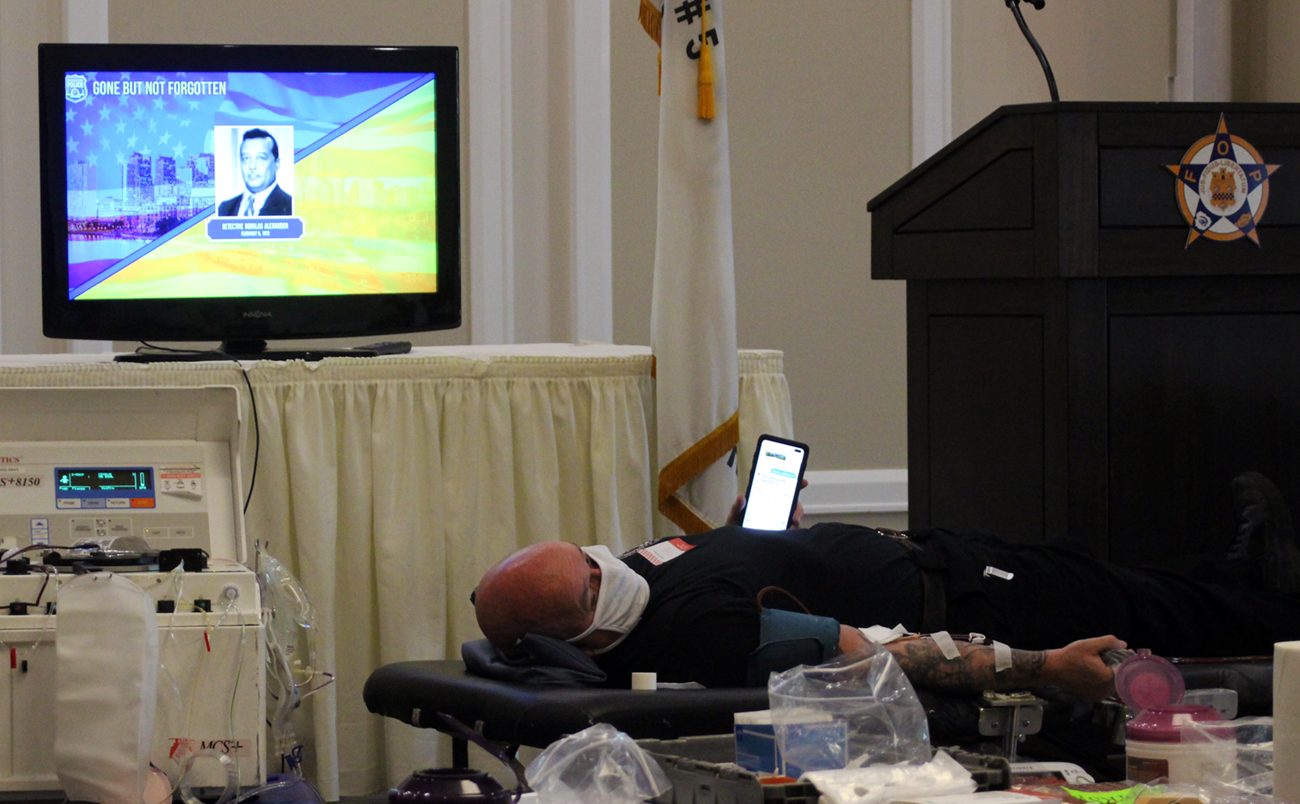 A donor gives blood at a May 13 drive organized by Michael the Archangel Ministry at the Fraternal Order of Police's Philadelphia Lodge #5. The outreach was scheduled to coincide with National Police Week, honoring fallen officers (one of whom is pictured on the video screen) while helping to redress a critical shortage in blood supplies. (Gina Christian)

Dozens of Philadelphia police officers rolled up their sleeves to give critically needed blood this week, thanks to an outreach named for the patron saint of law enforcement.

On Wednesday, the Michael the Archangel Ministry organized an all-day drive at the Philadelphia Lodge #5 Fraternal Order of Police (FOP), with the American Red Cross collecting some 110 pints of blood for use at regional health care facilities.

Headquartered at the FOP Lodge, Michael the Archangel Ministry provides pastoral care, bereavement and crisis counseling, and spiritual enrichment to some 14,000 active and retired Philadelphia Police Department officers and their families.

Chaplain and Oblate Father Steven Wetzel – who describes the ministry as “multidenominational, rather than nondenominational” – said “reaching out the community” is central to the group’s mission, and the blood drive was a logical extension of that effort.

Officer Martin Klepac, a ministry board member and a parishioner at Immaculate Heart of Mary in Andorra, spearheaded the event (the group’s fourth since the start of the pandemic) after seeing a billboard calling for blood donations.

A graduate of Roman Catholic High School, Klepac said his Catholic faith “instilled (the) values of how to treat people and how to give back.”

That commitment took on added significance at the May 12 drive, which was scheduled to coincide with National Police Week (May 9-15), an annual commemoration of fallen law enforcement officers. Due to the pandemic, the observance’s events – normally held each May in Washington, D.C. — are virtual, with in-person activities set to resume in October. 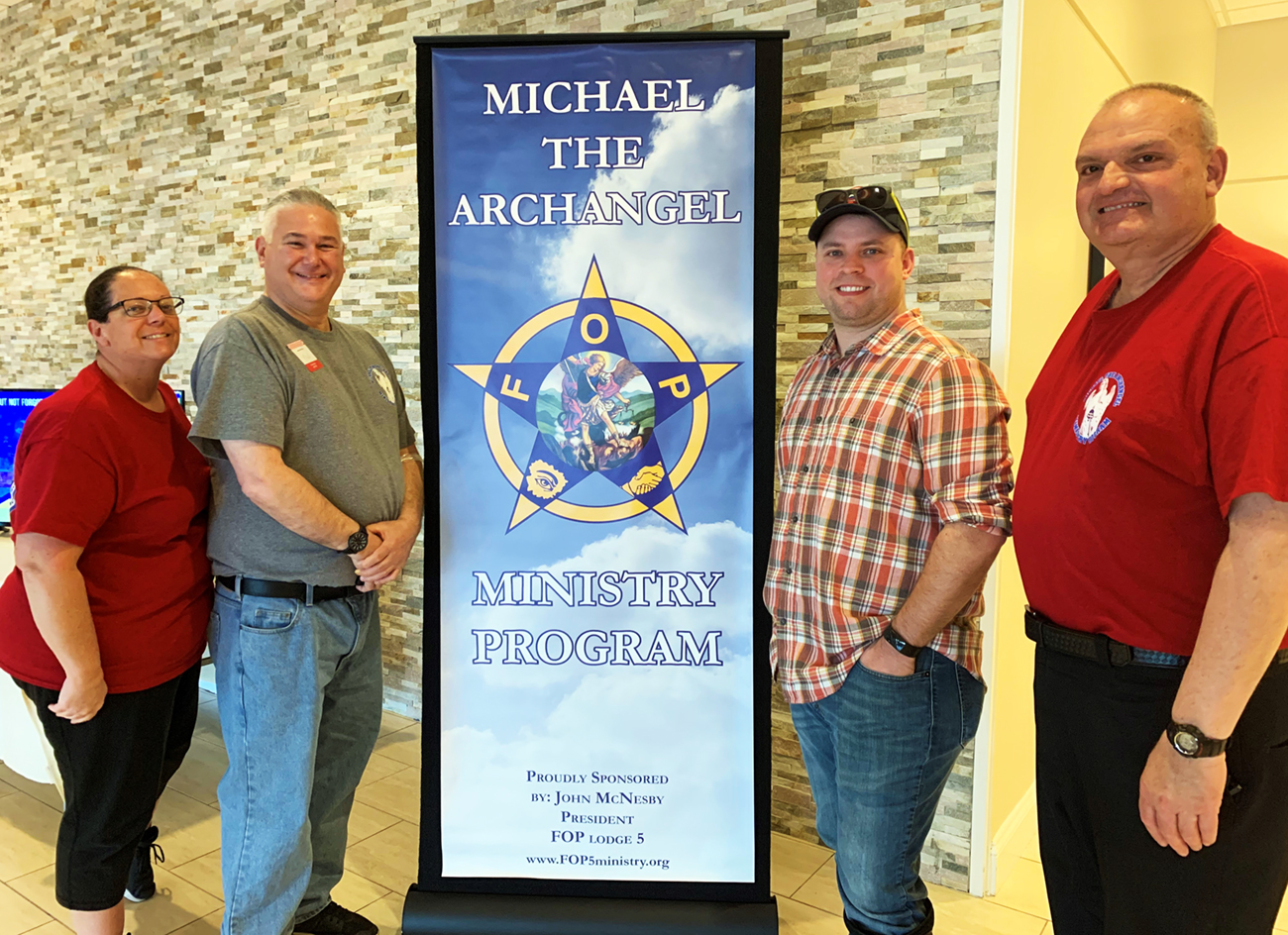 (From left) Jennifer Coco, Sgt. Michael Cerruti, Officer Martin Klepac, and Oblate Father Steven Wetzel of the Michael the Archangel Ministry staffed a May 12 blood drive hosted by the outreach at the Fraternal Order of Police Lodge #5 in Philadelphia. The event honored fallen officers while meeting a critical need for blood donations. (Gina Christian)

In the meantime, the Michael the Archangel blood drive featured a video loop depicting each of the more than 260 Philadelphia police officers who have died in the line of duty since 1828.

“This was one way of paying tribute to our fallen heroes, by having a blood drive for all that they gave,” said ministry member Sgt. Michael Cerruti, who belongs to Maternity B.V.M. Parish in Philadelphia. “We just give a little for all the sacrifices they made.”

Blood supplies have reached critically low levels in some states, even as demand has risen. With pandemic precautions cancelling many drives over the past year, the American Red Cross has struggled to keep up with quotas that can be staggering: approximately 36,000 units of red blood cells, 7,000 units of platelets and 10,000 units of plasma are needed daily in the U.S.  One car accident victim alone can require as many as 100 units of blood.

Concerns over COVID and the impact of vaccinations should not deter donors, according to the American Red Cross, since sterile collection procedures are used and in most cases there is no deferral time for donations from those who have been vaccinated.

“Each donation saves about three lives,” said Cerruti, who noted that in the past year Michael the Archangel has collected over 314 pints of blood.

While a normal drive averages about 30 donors, he said, “this one today is triple that size, and it’s because of the strong following we have through the ministry program, which has touched so many people.”

For Klepac, the initiative was simply about “seeing a need, and getting enough people together to make a positive impact.”

And that’s one of the best tributes a fallen officer could receive, said Father Wetzel.

“Police are out on the street, giving of themselves, their time, their safety and everything else,” he said. “And their coming here is also really sacrificial.”

NEXT: Watch the ordination of new priests Saturday morning