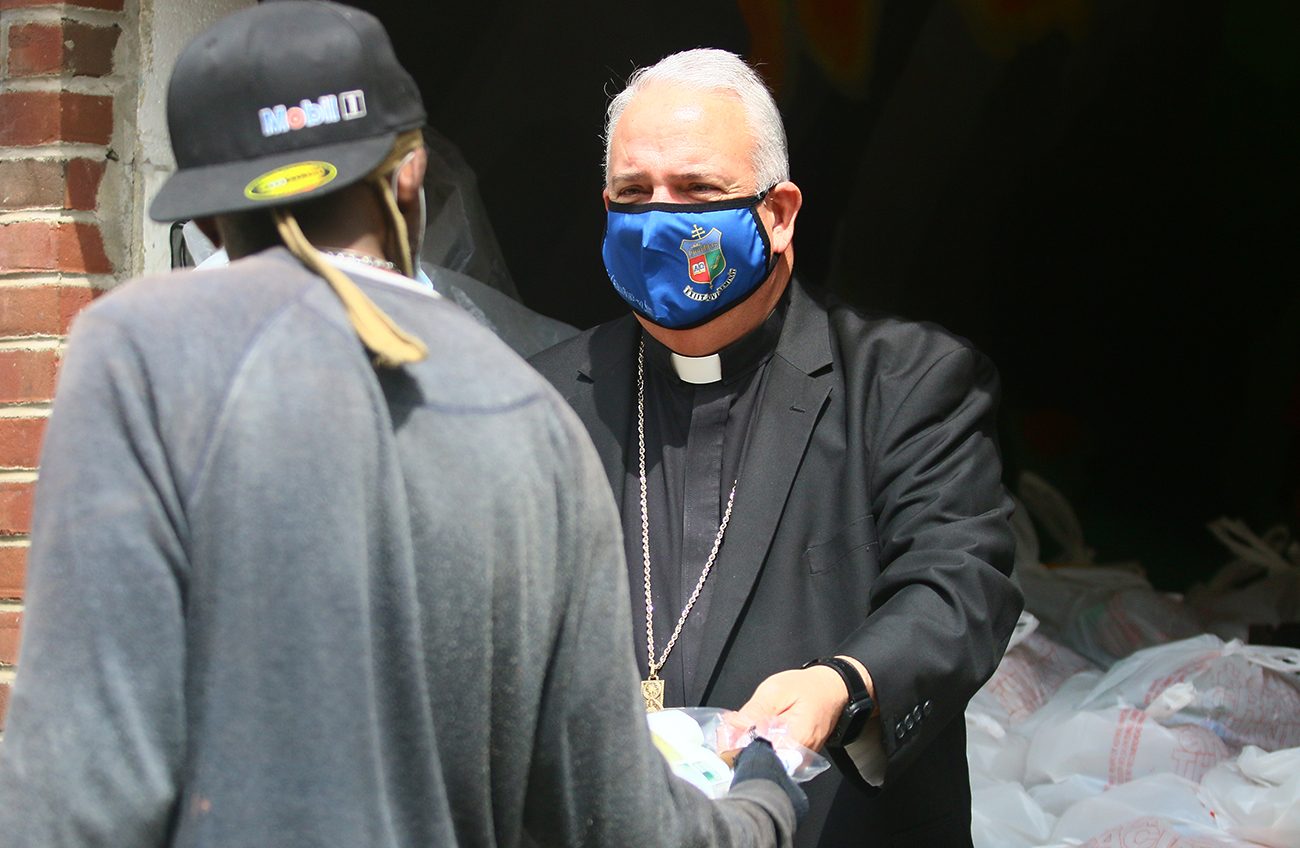 Archbishop Nelson Perez hands a bag of food and personal items to a guest at St. John's Hospice. For more than 55 years, the ministry -- part of archdiocesan Catholic Social Services -- has assisted thousands of men experiencing homelessness, while affirming their dignity. (Sarah Webb)

Staff and volunteers at an archdiocesan homelessness outreach were recently hailed by Archbishop Nelson Pérez as “the very visible face of God for people who are down and out.”

Each weekday, SJH (a beneficiary of the Catholic Charities Appeal) provides more than 300 meals to its residential and day guests, as well as case management, on-site nursing, daily showers and a mail room. In addition, the facility annually houses some 250 men transitioning from homelessness to independent living.

SJH development director Elizabeth Small described Archbishop Pérez’s visit as a “great blessing” to a “re-energized” team that is looking forward to fully resuming its in-person assistance to clients as COVID restrictions are eased.

That aid includes the hospice’s sit-down meals, which have been a hallmark of SJH’s more than 55 years of operation. Secretary for archdiocesan Catholic Human Services James Amato said plans are in the works to renovate the hospice’s kitchen to make it more efficient and welcoming — a project “definitely worth the investment,” he said.

Like many outreaches, however, SJH has been forced to rely on a “grab-and-go” format throughout the pandemic to minimize client contact. During his visit, Archbishop Pérez helped hand out boxed lunches to men who lined up along the 1200 block of Race Street, where the hospice is located.

But an eventual return to the dining room is essential, since the main ingredient in SJH’s food distribution is the fellowship among staff, volunteers and clients, said permanent Deacon Anthony Willoughby, now in his 18th year as a manager at the hospice.

“As I’ve always said, a meal is not a meal – a meal is dignity, and that’s what we’re bringing here,” said Deacon Willoughby. “Anybody can hand out a meal, but not everybody can genuinely pray for these men, interact with them and let them know they’re loved.”

“We show love from the outside to the inside, from the time we meet them in line until they get to the building,” said Hanif Jackson, who manages the hospice’s Coffee House program. 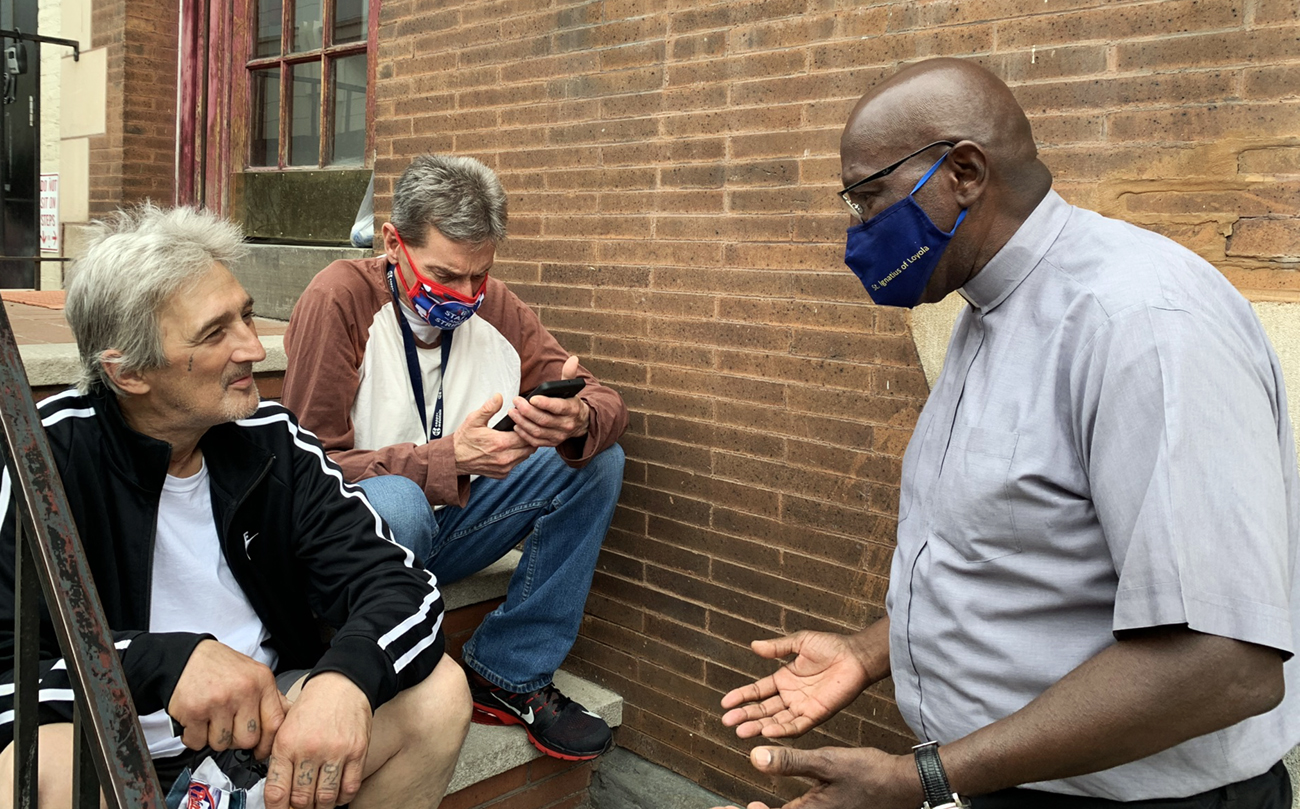 Since 2005, the SJH Coffee House has provided a safe sleeping environment from 10 p.m. to 6 a.m. for some 27 chronically homeless men who typically avoid the shelter system. The year-round service includes a warm meal, beverages, restroom access and showers.

Jackson admitted he’s often moved at the sight of the men resting each night.

“Many nights, I cry out on that ramp, just looking at them,” he said. “They have a place to come and feel comfortable, a place where they can sleep.”

And that can make all the difference in a person’s life, Jackson added, noting that while recently boarding a SEPTA bus, he met a former client – the driver, now the married father of three children with a home of his own.

“I said to him, ‘We helped you, but you helped me too,’” said Jackson. “Sometimes you only plant the seed, but I got a chance to see the harvest.”

SJH case manager Peter Greenland shared that “full circle” experience himself: after the Jamaican native moved here in 2011, he found himself homeless while applying for U.S. residency, and sought help at the hospice.

Throughout the “brutal” immigration process, “being here provided me stability,” he said. “I had a roof over my head, and I didn’t have to worry about where I was going to sleep and get food. I could focus on dealing with immigration.”

Greenland now brings a tried-and-true message of hope to his clients.

Struggles with housing don’t define a person’s worth, said Barry Martin, director of SJH’s Good Shepherd program, a drug- and alcohol-free, 12-bed residence within the hospice for medically fragile men in homelessness.

“We’re trying to look at homelessness in a different way,” he said. “We’re viewing it as something that has occurred in their life as a result of something, not as a result of them.”

For volunteers, the hospice is a way of encountering the divine.

“This is a sacred place, in my opinion,” said Francis X. Connell, the former chair of the SJH advisory board and chief financial officer for the Papal Foundation.

“It’s a lay vocation to be part of this,” said Mulholland, a parishioner of St. Anastasia in Newtown Square. “It does as much for the board members as it does for those we serve.”

“We have about 43 parishes that participate in our casserole (donation) program,” he said. “At a couple of parishes, I can roll out having picked up 130 casseroles, 90 bags of clothes and four or five boxes of toiletries.”

“It’s a blessing to see our residents get what they need, and to see them full of gratitude for everything that they get,” she said.

Archbishop Pérez said they weren’t the only ones who were grateful.

“I want to thank you for all you do,” he said. “You are the very visible face of God’s love for people who are down and out. You might not be able to solve the problems of the world, but if through your actions someone is able to breathe a little easier and sleep, how incredible that is.”

NEXT: Transitional deacons to be ordained for Philadelphia this Saturday