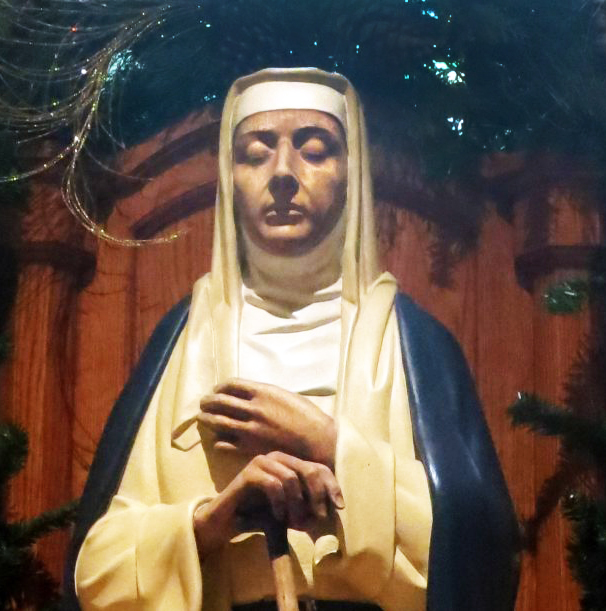 A statue of St. Margaret of Castello at St. Patrick Church in Columbus, Ohio. (Nheyob via Wikimedia/CC BY-SA 4.0).

Local disability advocates are hailing the recent canonization of a 14th-century lay Dominican as a “great blessing.”

On April 24, Pope Francis declared Margaret of Castello a saint through a process called “equipollent (equivalent) canonization,” which recognizes longstanding devotion to the individual, enduring virtues and a legacy of miraculous intercession. St. Hildegard of Bingen and St. Francois de Laval are among those who have been elevated through the procedure.

Born blind and with a severe curvature of the spine, Margaret was initially secluded until age 6 by her parents in their central Italian castle, and later walled into a room her father built adjacent to the parish church. Food, necessities and holy Communion were passed to her through a window.

In 1303, 16-year-old Margaret was taken by her family to a shrine in Città di Castello, but when the pilgrimage failed to result in her cure, her parents abandoned her there. Cared for by local residents, she was eventually admitted to the Third Order of St. Dominic. In gratitude, she opened and taught at a small religious education school for the town’s children.

Upon her death in 1320 at age 33, the townsfolk requested that she be laid to rest in the nearby church; some 120 years later, her remains were transferred to the Basilica of St. Dominic in Città di Castello.

(Related: Persons with disabilities lead us to do “our very best,” says archbishop)

Pope Paul V declared her blessed in 1609, and 700 years after Margaret’s birth, the bishops of Città di Castello and Urbino-Urbania-Sant’Angelo asked the Vatican’s Congregation for Divine Worship to confirm Margaret as patroness of the blind and marginalized. That effort was seconded by supporters in the United States, who launched a crusade for her canonization.

St. Margaret of Castello is a model “for the whole church, not just those who are blind or live with a physical disfigurement,” said Immaculate Heart of Mary Sister Kathleen Schipani, director of the archdiocesan Office for Persons with Disabilities and the Deaf Apostolate.

The laywoman’s holiness “helps all of us to recognize people with disability for their works of charity and their ability to embrace their faith,” said Sister Kathleen.

“Although Margaret faced tremendous challenges, including the rejection of her parents and numerous physical disabilities, she did not allow these trials to defeat her nor define her,” said Sister Lisa, principal of the St. Lucy Day School for Children with Visual Impairments, one of three archdiocesan schools of special education.

Margaret instead “placed all of her trust in God, who in turn was able to perform great works through her,” said Sister Lisa.

Permanent Deacon Christopher Hinson, a graduate of St. Lucy’s, called the saint’s canonization “a tremendous gift to communities of people with disabilities.”

“It provides them recourse to a powerful witness of the Gospel who shares a common bond with them,” said Deacon Hinson, who serves at St. Anastasia Parish in Newtown Square. “Those of us who have ‘alternate abilities’ can be lifted up by the example of St. Margaret’s charity and lifelong dedication to God.”

Centuries later, St. Margaret’s legacy has found a counterpart in Augustinian Father William Atkinson, a Delaware County native who became the first quadriplegic man ordained to the priesthood. A beloved teacher at then-Msgr. Bonner High School, Father Atkinson (who died in 2006) was named a “Servant of God” following a September 2015 cause opened by now-retired Archbishop Charles Chaput.

Both St. Margaret and Father Atkinson affirm that individuals with disabilities can act as “splendid agents of the Gospel message of love,” said Sister Kathleen.

And although medieval Italy and modern society are worlds apart, St. Margaret’s devotion to her relationship with the Lord “teaches us that God can do great things for us and through us when we keep our hearts fully open to him,” said Sister Lisa.