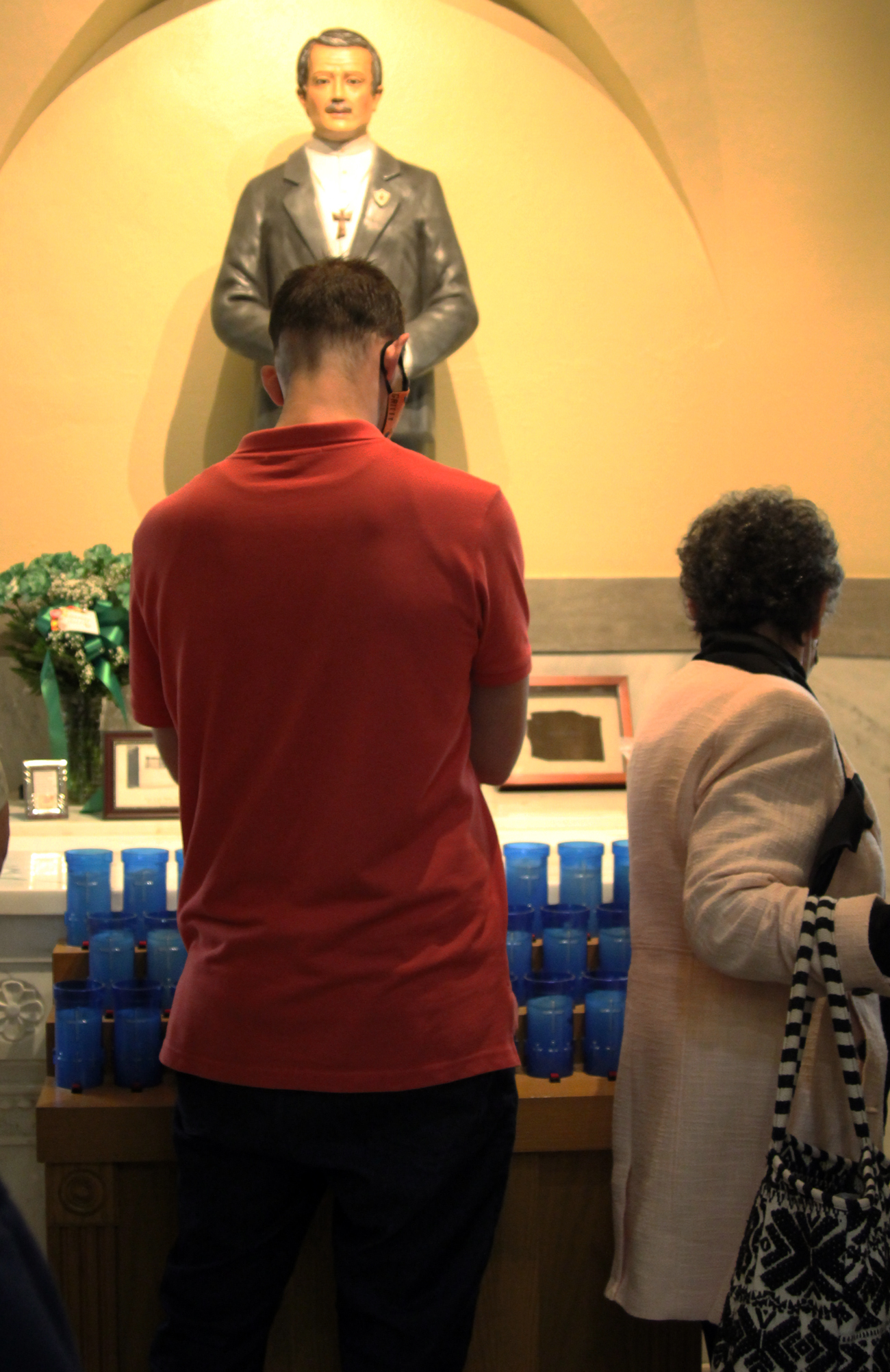 Faithful pray before a statue of Venerable Matt Talbot at a newly dedicated shrine in St. Gabriel Parish in South Philadelphia. The parish has long been a “hub of devotion” to the saint in the making, who has become a popular patron of addiction recovery for his renunciation of alcoholism and his profound spirituality. (Gina Christian)

A South Philadelphia parish has just dedicated a shrine to a former alcoholic now on the path to sainthood.

Some 160 faithful gathered May 2 at St. Gabriel in the city’s Grays Ferry section, where a new statue of Venerable Matt Talbot — commissioned with the generous assistance of the DiCocco Family’s St. Jude Shop in Havertown — was unveiled after the 10 a.m. Mass.

The Irish laborer, who died in 1925, renounced a life of addiction and went on to become “a great example of what it means to remain in our Lord and bear much fruit,” said Norbertine Father Carl Braschoss, celebrant and pastor.

Born in 1856, Talbot started drinking at age 12, and for more than 16 years afterward was mired in addiction — even “pawning his own clothing and boots” for alcohol, said Father Braschoss.

When friends refused to buy him a drink one evening, a penniless 28-year-old Talbot took a three-month sobriety pledge, eventually extending it to a lifetime commitment through the Dublin-based Pioneer Total Abstinence Association of the Sacred Heart.

Talbot went on to lead a quiet, ascetic life that included daily Mass, prayer, Scripture reading and charitable works. Fatally collapsing on a Dublin street en route to church, he was discovered to have regularly worn chains under his garments.

The links “were not for show,” said Father Braschoss, but rather served “as a reminder that he wanted to be a chosen slave of Mary and our Lord, instead of a slave to drink.”

Pope Paul VI declared Talbot “venerable” in 1975, and the Irishman is now invoked as an intercessor by a number of ministries for those suffering from addiction, including the Calix Society, which was founded in the U.S. some 20 years after Talbot’s death. The global Catholic recovery group, based in Glenside and named after the Latin word for “cup,” ensures 12-step-based sobriety by promoting sanctification through the sacraments. Meetings generally feature Mass, eucharistic adoration, the rosary, reflection and fellowship.

In addition to featuring a local Calix chapter, the parish is home to a Third Order Secular Franciscan fraternity named for Talbot. That group in turn emerged from Our House Ministries, a Catholic recovery outreach founded by Father Douglas McKay, an archdiocesan priest who grew up in St. Gabriel’s and began praying to Talbot while a seminarian.

“When I first found out about him, I wanted to get all the materials on him I could,” said Father McKay, who along with Msgr. Francis Carbine concelebrated the May 2 Mass. “I always carried a Matt Talbot prayer card.”

Having witnessed addiction’s long impact on both his own family and the Grays Ferry area, Father McKay said he “started going into the bars and handing out the life of Matt Talbot.” Over time, those efforts culminated in the founding of Our House Ministries, which today operates several recovery homes adjacent to St. Gabriel.

The Irishman’s unlikely journey from self-destruction to saintliness “will enlighten the way for so many people who are struggling in darkness,” said Msgr. Carbine.

Kennedy credits that intercession with keeping him sober – as well as alive after a 14-hour emergency surgery for an intestinal rupture. Following his hospitalization, he attended a Matt Talbot-themed retreat, where he was able to release many of the resentments that had fueled his addiction.

“I literally used to get high behind where the Calix meetings are now,” said Kennedy, speaking from the St. Gabriel lawn after Mass. “Matt Talbot enabled me to be a part of this, from getting high over there to be here doing this work.” 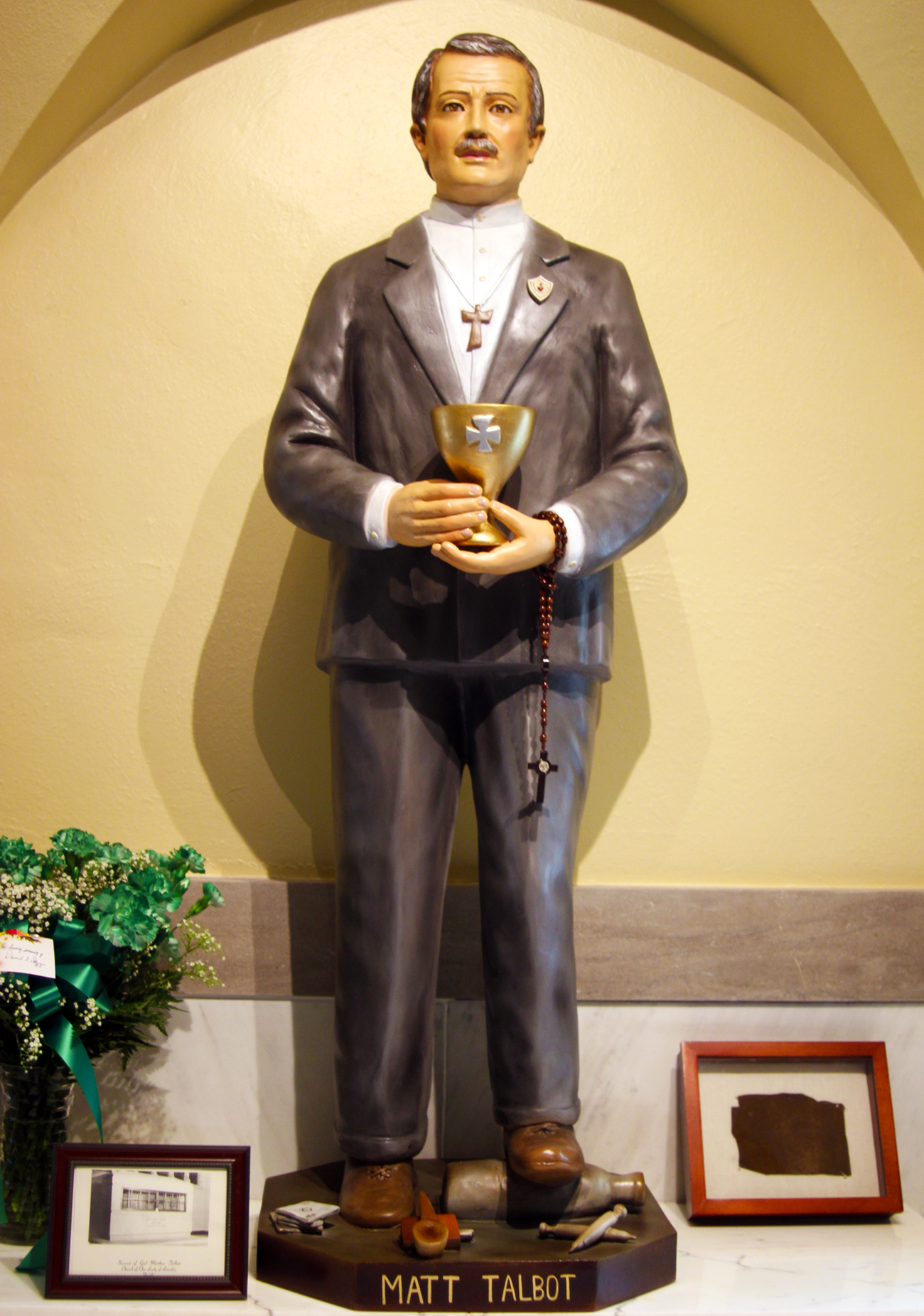 A statue of Venerable Matt Talbot stands at the center of a new shrine in his honor, which was dedicated May 2 at St. Gabriel Parish in Philadelphia, where the Irish laborer-turned-mystic has long been a popular patron, particularly for those in addiction recovery. (Gina Christian)

Now a daily communicant, Kennedy led the final construction phases of the Talbot shrine at St. Gabriel, coordinating with artisans and contractors to revamp the former baptistery into a bright, welcoming alcove containing the statue, prayer cards, medals, and a book of intentions.

Ultimately, said Johnston, the goal is to have the site become a national shrine – “but there are a few steps involved,” he noted.

On a 2014 visit to Philadelphia from Ireland, Father Brian Lawless, vice postulator of Talbot’s cause for canonization, suggested the church could become the someday saint’s U.S. national shrine. Prior to being named as such, however, the shrine must first receive archdiocesan approval, and later the endorsement of the U.S. Conference of Catholic Bishops.

The process starts with faithful making regular visits to the new shrine, said Johnston, and St. Gabriel will be open on Tuesdays and Thursdays from 8:30 a.m. until at least 6 p.m. for that purpose.

The “light in the darkness” is Jesus, Father McKay said – something Talbot knew from his own experience.

On trading addiction for mystical oneness with Christ, said Father McKay, Talbot’s advice was as plainspoken as the man himself: “If I can do it, you can do it, by the grace of God.”

For more information on the Matt Talbot shrine at St. Gabriel Parish in Philadelphia — as well as the Calix Society, Our House Ministries, the Pioneer Total Abstinence Association and the Matt Talbot Secular Franciscan Fraternity — visit www.matttalbotshrine.org.

NEXT: Congratulations to priest jubilarians, new priests of 2021