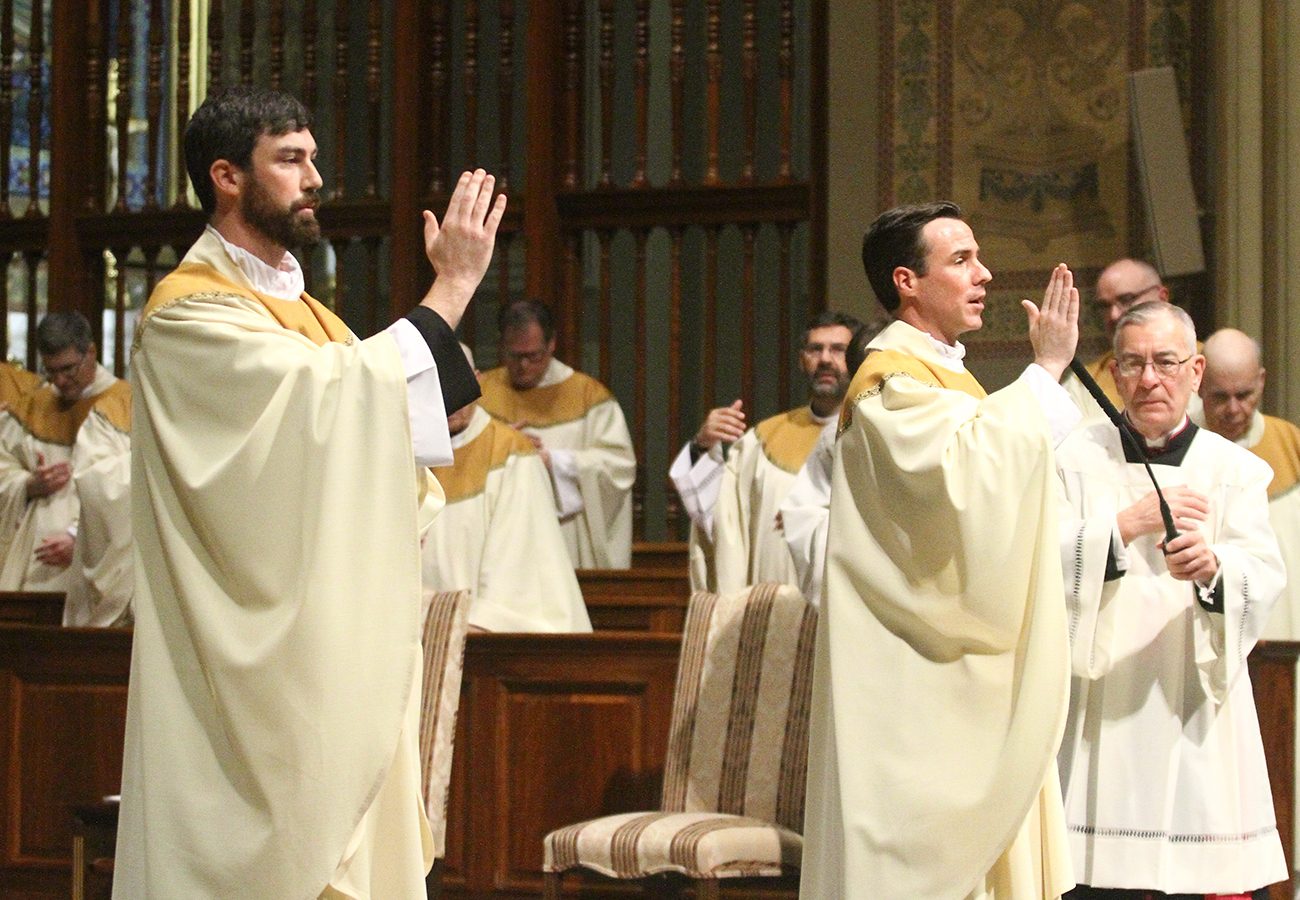 Fathers Tobin and Cavara offer the final blessing for Mass -- their first as new priests -- at the liturgy's conclusion.

Calling the ordination of two new priests “a wonderful day of blessing for the Church of Philadelphia,” Archbishop Nelson Perez celebrated a solemn liturgy Saturday, May 15 in the Cathedral Basilica of SS. Peter and Paul in which he ordained Father Kenneth Cavara and Father Mark Tobin to the priesthood.

(See a gallery of photographs from the Mass here.)

Before leading the ordination rites, the archbishop said the two men from Chester County were joining “an incredible fraternity” of priests in the Archdiocese of Philadelphia.

Joining the numerous clergymen at the Mass were family members, friends, seminarians and parishioners from home including from St. Agnes in West Chester, Father Cavara’s parish; and from Assumption B.V.M. in West Grove, Father Tobin’s parish.

Among them was Noreen Cavara, mother of Father Kenneth and of his brother, Father Mark Cavara, ordained in 2016.

The ordination was for her “a time of extraordinary grace and blessing from the Lord,” she said. “We’re very grateful to the Lord for all the good things he’s done for us. It’s all his gift.

“This is such an opportunity for grace, and it’s a great day for the church, for new priests here and elsewhere,” she said, adding the ceremony was “a very special privilege for me as a mom.” 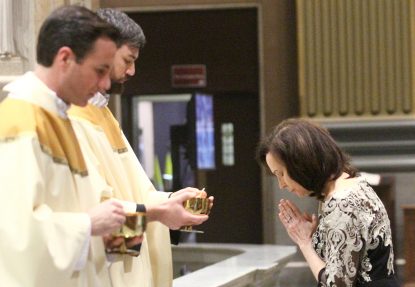 Father Tobin’s mother Stephanie, who was seated in a front pew with her husband Bill, said she was “overwhelmed” but gave “all the glory to God” for her son’s ordination.

God had “poured out his blessing on us because we try to be faithful even though we falter along the way, trying to do the right things as parents,” she said. “I feel it’s just a gift from God that no one deserves but we received for some reason.” 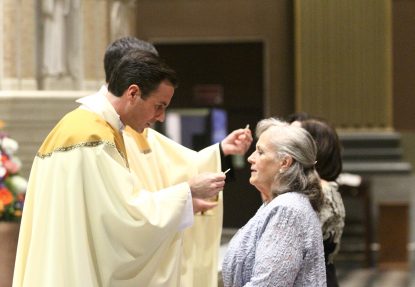 Both the Tobin and Cavara families reveled in the elaborate rites of the ordination, buoyed by the singers and musicians of the Cathedral Basilica Schola including organist Mark Loria, all directed by Charlene Angelini.

Archbishop Perez preached in his homily about the “style” or “ways of being a priest” that the new priests should remember, referring to the words of Pope Francis this year as he ordained new priests in Rome.

The pope said the “service that priests are called to must reflect how God has cared for and continues to care for his people” in three ways: through closeness, compassion and tenderness.

“Remember those three words as now your history as priests begins to unfold,” Archbishop Perez told Fathers Cavara and Tobin.

The archbishop also told the congregation that the previous night at St. Charles Seminary, the soon-to-be new priests joined the seminarians at a cook out and gave them words of advice, words that the archbishop encouraged the men to take themselves.

Father Cavara told the seminarians his own ordination was only a moment in time, and what follows any moment is unknown so they should “trust that the Lord would guide them” in the future.

Father Tobin told them they should “be real” and “not to hide behind a façade but to be real and close to the people.”

After the homily were the various aspects of the ordination including the anointing of the hands of the candidates with the oil of sacred chrism, the handing of a chalice and paten, laying on of hands by the archbishop and by all the priests in attendance, and the vesting with stole and chasuble – the liturgical attire of a priest – by a priest colleague who is particularly close to the newly ordained.

For that ritual, Father Cavara naturally was assisted by his brother Father Mark, while Father Tobin relied on the help of his friend and seminary faculty member Father Herbert Sperger.

The latter led Father Tobin in the 30-day Spiritual Exercises of St. Ignatius of Loyola six years ago, and joined him and other seminarians five years ago on a long walk: the Camino de Santiago, a walking pilgrimage through towns across Spain.

“You get very close when you do an experience like that,” Father Sperger said.

Metaphorically speaking, Father Sperger said it was “fulfilling to have walked with a guy on his journey up until now,” he said of his friend’s ordination.

To see a young priest “just starting out, knowing that the church’s ministry is continuing and is in good hands, the people of God are going to be loved and cared for by a wonderful priest — it’s very joyful and satisfying.”

No ties are as strong as those of family, so for Father Mark Cavara, “it was a blessing to be able to see a member of your own family as part of the ordination,” he said.

Family members had told him “how special it was to see one of their own get ordained,” and now five years later, “I see what they were talking about. I know the feeling. Obviously I’m very proud of him. He’s worked very hard to get to this day.”

Rounding out the traditions of priestly ordination in Philadelphia, the new priests welcomed many guests back to their families’ homes for a reception later in the day.

And on Sunday, May 16, each would celebrate his first Mass in his home parish joined by family, friends and members of that new priestly fraternity.