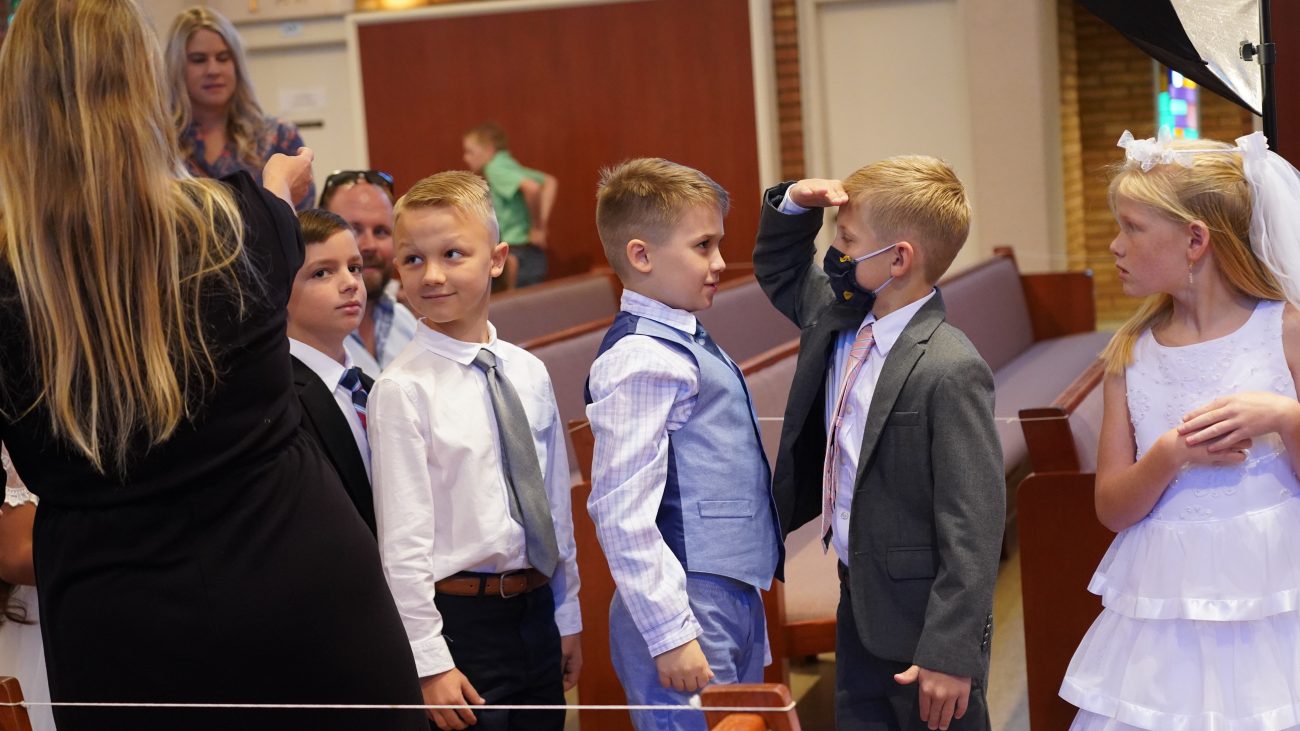 Carson Crosby, in blue, and his classmate compare height while lining up for group photos after their first Communion at St. Anthony Catholic Church in Columbus, Texas, April 24, 2021. Crosby has a mitochondrial disease that prevents him from consuming food orally so a fraction of the host was dissolved in a small amount of distilled water. (CNS photo/Janet Jones, The Catholic Lighthouse)

Carson has a genetic mitochondrial disease that prevents him from consuming food and drink orally. Since his infancy, he has been receiving nutrition through a feeding tube, but the Catholic Church does not allow the Eucharist to be given in this manner.

On April 24, he received the sacrament for the first time with the rest of his class. A fraction of the host was dissolved in a small amount of distilled water, which he was able to tolerate.

“I always knew that this was going to be a topic,” his mother, Jenna Crosby, said.

The family’s conversations led to theological discussions that have worked to deepen their faith and Carson’s desire to receive the Eucharist.

“He really asks some tough questions about faith,” Jenna told The Catholic Lighthouse, newspaper of the Diocese of Victoria.

The family discussed the issue with leaders of the Victoria Diocese including Bishop Brendan J. Cahill and they also spoke with Charleen Katra, executive director of the National Catholic Partnership on Disability before coming up with the solution of the dissolved host.

Father Augustine Asante, pastor of St. Anthony’s, prepared the host for Carson ahead of time and the practice will continue whenever he attends Mass at the parish.

“God will use him to touch other people’s hearts,” Katra said. “He’s exactly the way God intended him to be, and we have to make sure his faith journey is as joyful as yours or mine.” 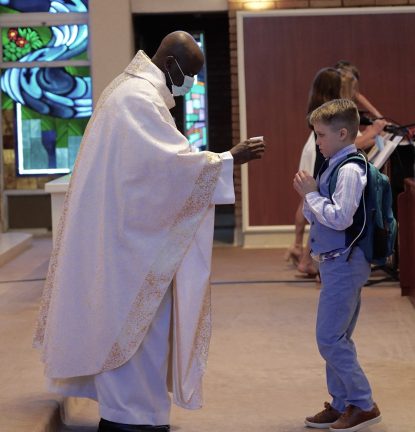 Carson Crosby receives first Communion from Father Augustine Asante at St. Anthony Catholic Church in Columbus, Texas, April 24, 2021. Crosby has a mitochondrial disease that prevents him from consuming food orally so a fraction of the host was dissolved in a small amount of distilled water. (CNS photo/Janet Jones, The Catholic Lighthouse)

The National Catholic Partnership on Disability is dedicated to, among other things, training Catholic communities to help people with disabilities have meaningful participation in the Mass and the sacraments.

Katra said people with different needs are often underrepresented in the pews and her office is working to change that. The group does assessments and presentations in English and Spanish across the country to help parishes to be more inclusive not only for those with physical limitations but people with autism and mental illness as well.

Christella Alvarez, from the Office of Catechetical Ministry in the Victoria Diocese, said the “Guidelines for the Celebration of the Sacraments with Persons with Disabilities” says that Catholics who require nourishment through feeding tubes are encouraged to receive holy Communion, as are all the Catholic faithful.

It says that the “norm of receiving through the mouth remains the same for those who otherwise use a feeding tube for sustenance and holy Communion is not to be administered through a feeding tube.”

Alvarez said that was the critical point in trying to find a solution for Carson, and Katra, through her experience with another diocese, suggested the dissolved host.

Jenna said as they prepared for first Communion, Carson became less anxious and happy that he was able to receive the Eucharist in a different way. But, she said, he is very empathetic and “in tune with things,” so there were also plenty of moments of apprehension for Carson and his family.

She said Alvarez worked with her on trying to figure out what the protocols were, which “nobody really knew,” she added.

After the first Communion Mass, Carson said it was easy for him to consume the Eucharist as it was given to him. His prayer before bed that night, Jenna said, was: “I am thankful to Jesus that I was able to receive my first Communion and change the way people like me can do Communion.”

Jenna said she knows Carson is a special blessing and his story will bless others.

“His life has just been very different and is very different,” she said, describing him as someone who teaches others to appreciate what they have.

“My child has completely changed the trajectory of our lives. I am so much stronger in my faith,” she said. She also credits St. Anthony School for opening their arms to Carson. His disease means that he has to have an attendant with him at school to provide nutrition.

“It just really affects everything from head to toe,” Jenna said, explaining that the mitochondria are the “power house” of human cells and Carson’s work at 10-30% capacity. “Every time he is sick, he could end up in the hospital because he has a weak immune system.”

Jenna attended St. Anthony as a child and she and her husband, Justin, recently moved back to the area just in time for Carson to start school there.

“I just knew St. Anthony’s was the place that he would need to be,” she said. “St. Anthony’s has been super accepting of him. Carson has just thrived there.”

She said he also has great doctors at Texas Children’s Hospital in Houston. “You look at him and you don’t think that there’s anything wrong with him. That’s all thanks to his feeding tube.”

Jones is editor of The Catholic Lighthouse, newspaper of the Diocese of Victoria.

PREVIOUS: Catholic doctor weighs in on COVID-19 vaccines for children

NEXT: Agency launches appeal to help India’s response to COVID-19