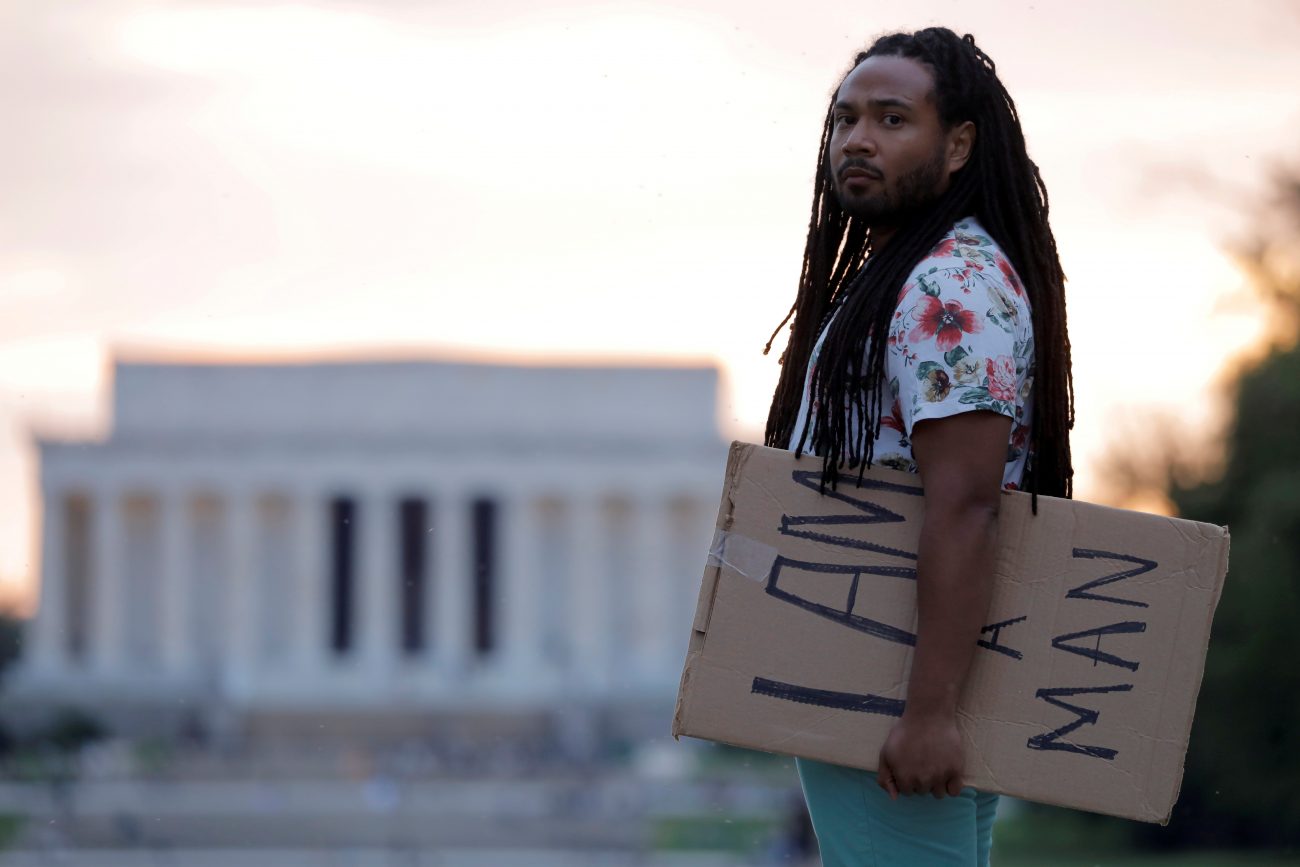 Aaron Xavier Wilson poses for a photo on the National Mall in Washington May 11, 2021, holding the same banner during a "Get Your Knee Off Our Necks" march in support of racial justice last year. Catholic and other faith leaders marked the "painful first anniversary" of George Floyd's May 25, 2020, death with prayers for his family and for "healing, mercy, justice and change." (CNS photo/Andrew Kelly, Reuters)

WASHINGTON (CNS) — George Floyd’s death while in police custody a year ago left “a hole in the hearts of his family and friends” and “a hole in the fabric of our society,” said the director of the National Advocacy Center of the Sisters of the Good Shepherd May 25, the first anniversary of Floyd’s death in Minneapolis.

“Or maybe it just made the hole visible for all to see and witness,” the center’s Lawrence E. Couch wrote in a remembrance of the African American man who died after former Police Officer Derek Chauvin, who is white, knelt on his neck for over nine minutes.

Nationwide protests against racism and police brutality were sparked by video footage of the treatment of Floyd, who had been apprehended by Chauvin and three other officers for passing a counterfeit $20 bill and was, they claimed, resisting arrest.

“We have endured much over the past 12 months and we have lost many,” Couch said, noting the “nearly unfathomable numbers of people who died from COVID-19” but also “the men and women, boys and girls who have died through violence because they were Black — either at the hands of the police or because of the unsafe neighborhoods where they lived and played.”

“People of all colors and backgrounds deserve to live in safety and with opportunity,” he continued. “And as people of goodwill, we pray for an America united in love and purpose: united in our aspiration for racial equality, in freedom for all to dream, and an opportunity for all to become who they choose.”

In remembering Floyd, Couch offered prayers “for his family on this painful first anniversary of his death.”

“We pray also for healing and understanding, for mercy, justice and change,” he said.

Floyd was “a child of God,” who “had dignity and worth,” added Couch. “In death he is initiating change. The evil of racism cannot be eliminated overnight, but it can no longer be overlooked. The patching and mending of America has begun.”

On May 12, Hennepin County District Judge Peter Cahill allowed for the prosecution to seek a greater prison sentence for Chauvin after finding that he treated Floyd “with particular cruelty.”

Chauvin’s defense lawyer has petitioned for a new trial.

All four former officers also now face federal charges that they willfully violated Floyd’s constitutional rights as he was restrained face down on the pavement and gasping for air.

On the anniversary of his death, President Joe Biden and Vice President Kamala Harris met with family members of Floyd.

Adding her voice to remembrances of Floyd was the Rev. Jennifer Butler, CEO of Faith in Public Life, who called on Congress to pass the BREATHE Act, which would redirect taxpayer resources from policing and into new public resources aimed at making “communities safer and equitable.”

Among other provisions, the measure would establish pilot programs for a universal basic income and grant voting rights to those in the country illegally.

It is a counterproposal to the George Floyd Justice in Policing Act, which is currently under consideration in Congress. The measure sets up a national registry of police misconduct, ban racial and religious profiling by law enforcement and overhaul qualified immunity for police officers. It has passed the House but not the Senate.

“We need to reimagine public safety in a way that upholds racial equity and human dignity,” Rev. Butler said. “The BREATHE Act is an important step in this journey.”

She added, “We need more than reform of the criminal legal system; we need to reimagine public safety in a way that upholds racial equity and human dignity.”

PREVIOUS: Controversial priest says bishop asked him to resign, but he won’t

NEXT: USCCB president explains how planned discussion on Eucharist was set