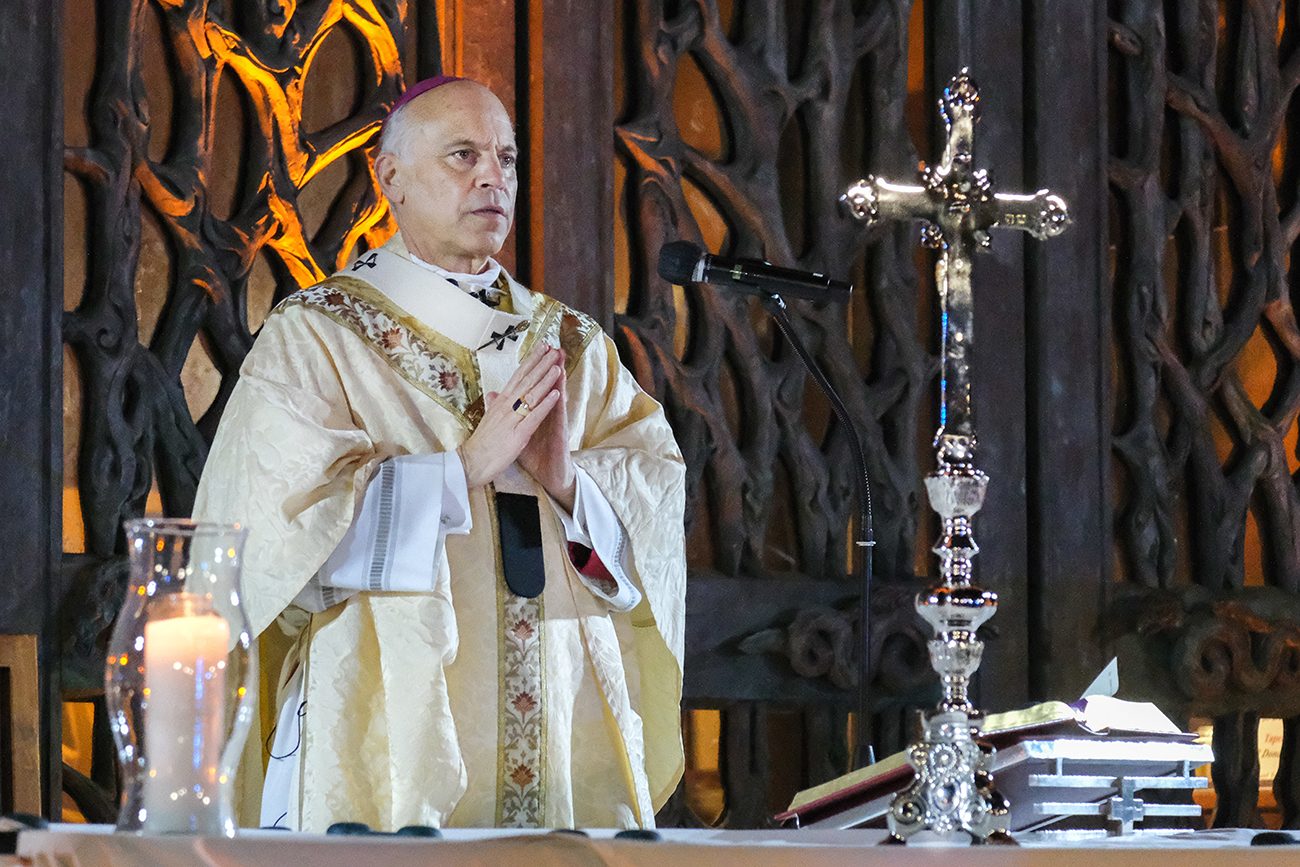 San Francisco Archbishop Salvatore J. Cordileone is pictured in a file photo celebrating Mass outside the Cathedral of St. Mary of the Assumption as part of a rosary rally. (CNS photo/Dennis Callahan, Archdiocese of San Francisco)

It emphasizes that “those who reject the teaching of the church on the sanctity of human life and those who do not seek to live in accordance with that teaching should not receive the Eucharist.”

The archbishop’s pastoral letter, the first he has issued, is called: “Before I Formed You in the Womb I Knew You: A Pastoral Letter on the Human Dignity of the Unborn, Holy Communion and Catholics in Public Life.”

He publicly announced the letter in the homily of the 8 a.m. monthly Mass for Life at the Cathedral of St. Mary of the Assumption May 1. After Mass, many members of the congregation prayed the rosary while walking to the Planned Parenthood clinic four blocks away, where they planned to continue praying.

“Abortion is the ax laid to the roots of the tree of human rights … Without protection of the right to life, no other talk of rights makes sense,” the archbishop wrote in the teaching document to the priests and laity of the archdiocese.

He also spoke directly to pregnant women and those who have had abortions, writing: “God loves you. We love you.”

He emphasized that Catholic teaching on who is morally responsible for abortion is very clear.

“Those who kill or assist in killing the child (even if personally opposed to abortion), those who pressure or encourage the mother to have an abortion, who pay for it, who provide financial assistance to organizations to provide abortions, or who support candidates or legislation for the purpose of making abortion a more readily available ‘choice’ are all cooperating with a very serious evil,” the archbishop wrote.

Archbishop Cordileone stressed that reverence for Communion is at the heart of his concern and quoted St. Justin Martyr’s words in the second century: “No one may share the Eucharist with us unless he believes what we teach is true; unless he is washed in the regenerating waters of baptism for the remission of his sins, and unless he lives in accordance with the principles given us by Christ.”

He then applied these same requirements to the topic of abortion, saying those who reject church teaching on the sanctity of human life and do not seek to live in accordance with church teaching in that area “should not receive the Eucharist.”

The archbishop spoke directly to Catholics in public life on this topic, urging them to “please stop pretending that advocating for or practicing a grave moral evil — one that snuffs out an innocent human life, one that denies a fundamental human right — is somehow compatible with the Catholic faith. It is not.”

“Please return home to the fullness of your Catholic faith. We await you with open arms to welcome you back,” he added.

The archbishop’s letter is available online at https://sfarch.org/inthewomb.

NEXT: Catholic doctor weighs in on COVID-19 vaccines for children