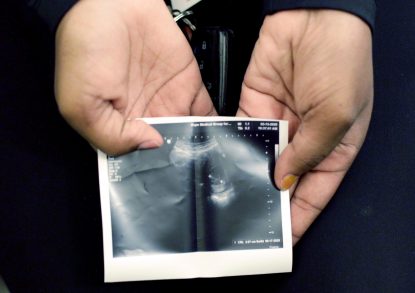 A pregnant Texas woman holds an image from a sonogram she received at the Hope Medical Group for Women in Shreveport, La., Feb. 13, 2020. Texas Gov. Greg Abbott signed into law a “heartbeat” measure May 19, 2021, that would prohibit abortions as early as six weeks. (CNS photo/Lila Engelbrecht, Reuters)

AUSTIN, Texas (CNS) — The new Texas “heartbeat” abortion law “will save thousands of lives and is a vital step on the road to abolishing all abortions in Texas,” said Texas Right to Life after Gov. Greg Abbott signed the measure into law.

The law, which is to take effect Sept. 1, bans abortions after a fetal heartbeat is detectable, which could be as early as six weeks of pregnancy. The law, one of the nation’s strictest abortion measures, has an exception for medical emergencies but not for rape or incest.

“Our creator endowed us with the right to life and yet millions of children lose their right to life every year because of abortion,” Abbott said before signing the bill May 19. “In Texas, we work to save those lives. That’s exactly what the Texas Legislature did this session.”

He later tweeted: “The heartbeat bill is now LAW in the Lone Star State. This bill ensures the life of every unborn child with a heartbeat will be saved from the ravages of abortion.”

Abbott thanked the two Republican state lawmakers who were the lead sponsors of the measure in their respective legislative chambers: Sen. Bryan Hughes and Rep. Shelby Slawson. It is the first “pro-life priority bill” to pass both chambers of the Texas Legislature and be signed into law.

The governor’s action came two days after the U.S. Supreme Court said it would consider the legality of a Mississippi abortion law that bans the procedure after 15 weeks of pregnancy. The lower courts have blocked the law from taking effect, rulings Mississippi appealed to the high court.

Six other priority bills have passed the Texas Senate but not the Texas House, including the Trigger Abortion Ban Act, S.B. 9, which would outlaw most abortions and would take effect if Roe is overturned; Texas would only allow abortions if the pregnancy threatens the mother’s life.

On March 31, the Texas Catholic Conference of Bishops, the public policy arm of the state’s bishops, was “thrilled to report” Senate passage of pro-life bills supported by the conference and considered its “top priorities.”

Jennifer Allmon, the conference’s executive director, said: “We have great hope that these bills, which provide further protections for women and unborn children, will become law.”

In reaction to the new “heartbeat” law, Elisabeth Smith, chief counsel for state policy and advocacy at the Center for Reproductive Rights, said the center and other organizations that support legal abortion are “not going to let this six-week ban go unchallenged.”

Drucilla Tigner of the American Civil Liberties Union of Texas, said Abbott’s “swipe of a pen can’t change the Constitution.”

Backers of the bill say the way it was written will make it hard for opponents to sue because the law empowers private citizens “to sue abortion providers or anyone who helps someone get an abortion after a fetal heartbeat has been detected,” according to The Texas Tribune news outlet.