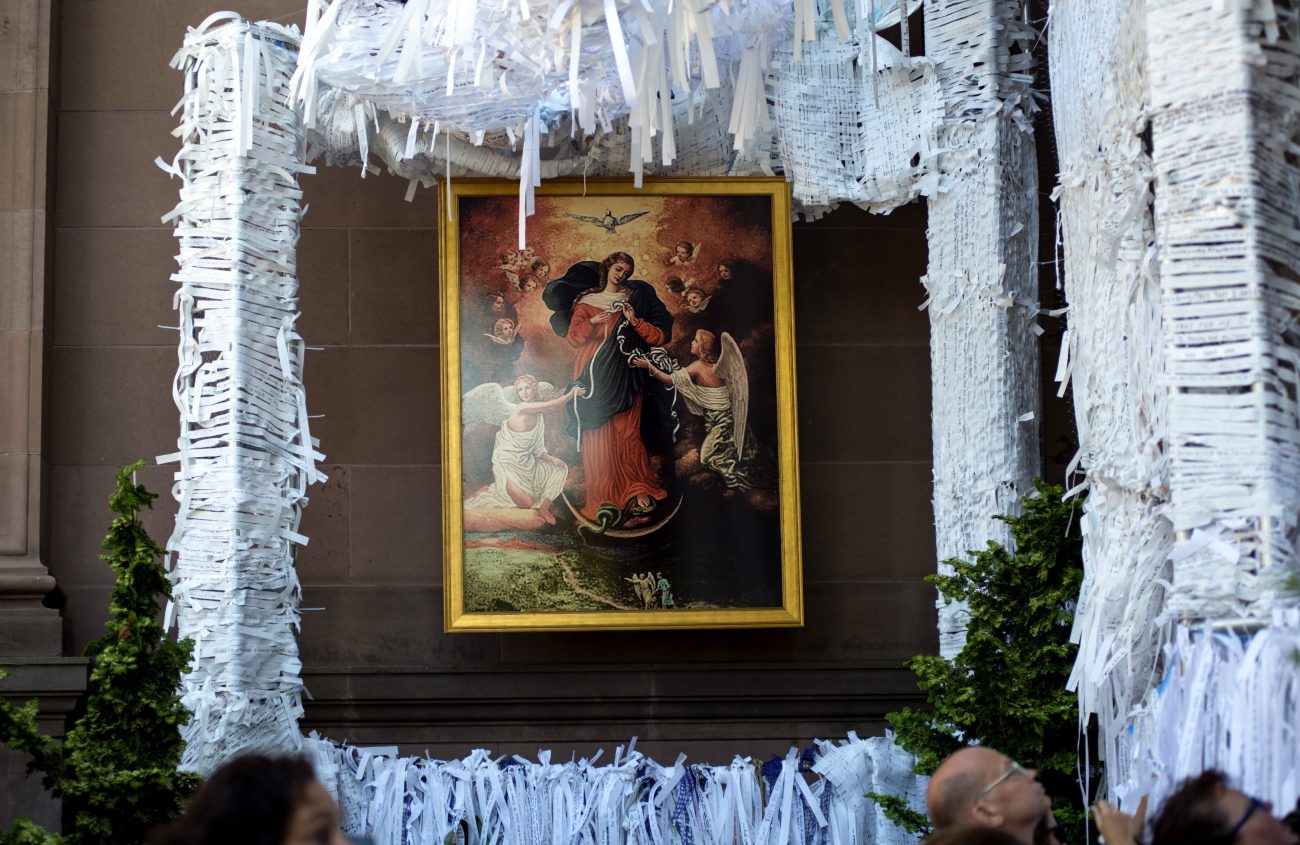 A painting of Mary Undoer of Knots hangs within the Knotted Grotto at the Cathedral Basilica of SS. Peter and Paul in Philadelphia during the World Meeting of Families in this September 2015 file photo. On May 31, 2021, Pope Francis will conclude the Catholic Church's monthlong rosary marathon with special prayers to Mary Undoer of Knots, one of his favorite titles for the mother of Jesus. (CNS photo/Carley Mossbrook)

VATICAN CITY (CNS) — Pope Francis will conclude the Catholic Church’s monthlong rosary marathon with special prayers to Mary, Undoer of Knots, one of his favorite titles for the mother of Jesus.

Bishop Bertram Johannes Meier of Augsburg, Germany, will bring an icon of Mary Undoer of Knots to the prayer service May 31 in the Vatican Gardens, and Pope Francis and his guests will pray that Mary will “untie the knots that oppress us materially and spiritually so that we can witness with joy to her son, our Lord Jesus Christ,” said a Vatican news release.

The Pontifical Council for Promoting New Evangelization, which organized the rosary marathon, said Pope Francis, who as a student saw the oil painting of Mary untying knots from a ribbon in an Augsburg church, has “a strong devotion to this image” and is largely responsible for spreading the devotion in Argentina. The image was painted by Johann Georg Melchior Schmidtner around the year 1700.

“The choice of this image represents a special prayer that Our Lady would intercede to untie the sufferings that have bound the world in this time of crisis” for people’s health, economic survival, psychological state and personal relationships, the pontifical council said.

The rosary in the Vatican Gardens will conclude a month of special recitations of the rosary from Marian shrines and parishes around the world, all with the intention of asking Mary’s intercession to help end the coronavirus pandemic and to give strength to people working to end it or suffering its effects.

The pope will be joined in the gardens by a group of children who recently received their first Communion at a parish in Viterbo that was the first in Italy to become a vaccination center and by groups of recently confirmed young people, a Scout troop, several families, including newlyweds and expectant parents.

Like the opening rosary, which Pope Francis led from St. Peter’s Basilica May 1, the closing prayer will include live video links with several Marian shrines around the world, including Our Lady of Sorrows in Kibeho, Rwanda, and Our Lady of Lourdes in Carfin, Scotland.

NEXT: Pope orders visitation of Archdiocese of Cologne