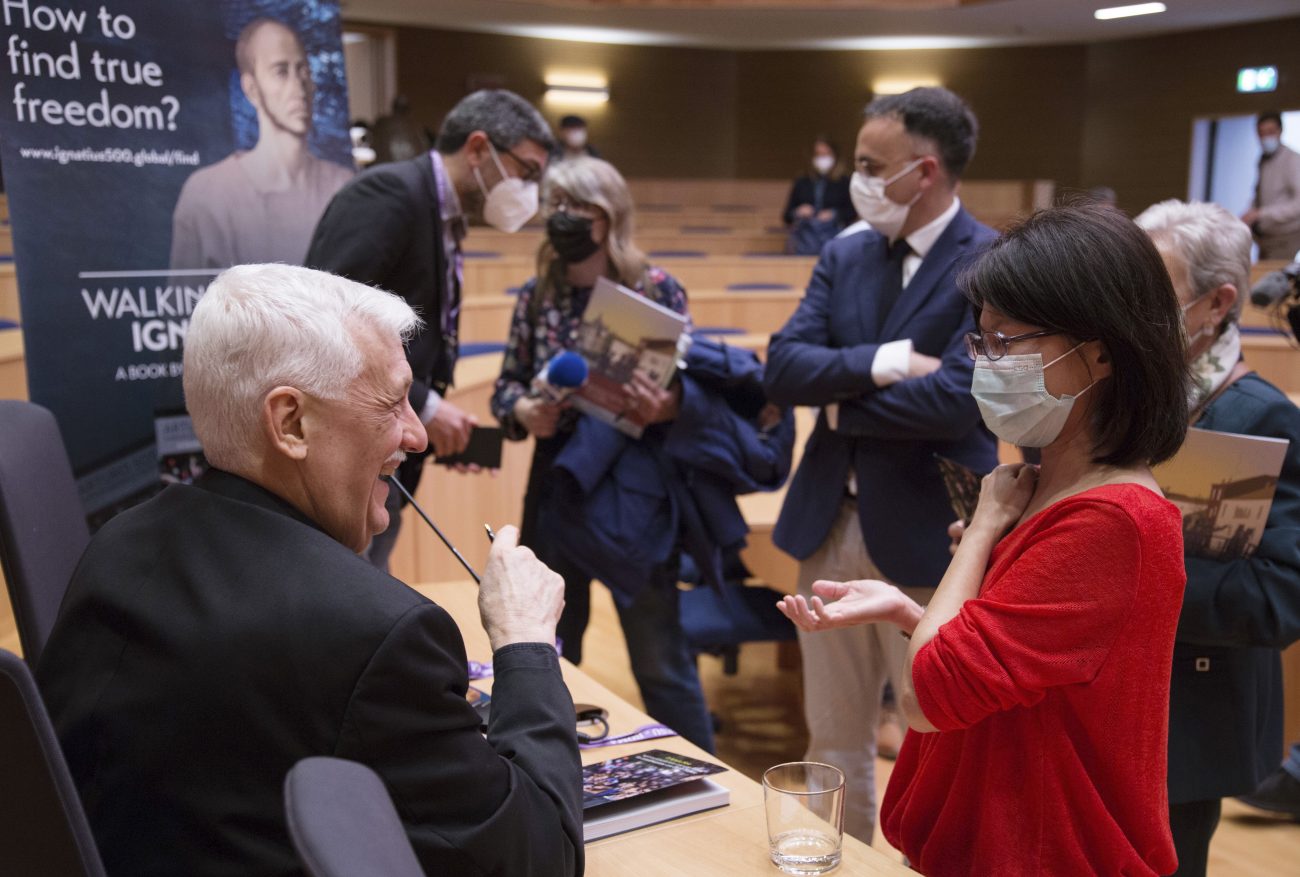 Father Arturo Sosa, superior general of the Jesuits, talks with a journalist during the presentation of the book, "Walking with Ignatius," in Rome May 11, 2021. The book is based on an interview journalist Dario Menor conducted with Father Sosa. It anticipates the May 20 opening of a special Ignatian Year marking the 500th anniversary of the conversion of St. Ignatius of Loyola, founder of the Jesuits. (CNS photo/courtesy General Curia of the Society of Jesus)

ROME (CNS) — The roughly 15,000 members of the Society of Jesus, their collaborators and many people who draw on the spiritual heritage left by St. Ignatius of Loyola are preparing to mark a special Ignatian Year beginning May 20 and lasting until the saint’s feast day, July 31, 2022.

Anticipating the celebration, Father Arturo Sosa, the Jesuit superior general, hosted the launch May 11 of “Walking with Ignatius,” a book-length interview he did with journalist Darío Menor.

On May 20, 1521, the soldier Ignatius was wounded by a cannonball in battle; he spent months in bed recuperating and reading about Jesus and the lives of saints. He decided he wanted to be one of them, laid down his sword, gave away his belongings and set off on a journey to discern God’s will for his life.

“With his leg shattered, he became a pilgrim, a wayfarer toward true freedom,” Father Sosa said at the book launch. “He freed himself from the illusions he had built up from his family experience and in the royal court, to pursue the ideal built from the personal encounter with Jesus of Nazareth, which allowed him to discover the essence of freedom: the love that leads to the surrender of one’s own life so that others may have life.”

The theme of the Ignatian Year is “To see all things new in Christ.”

Father Sosa said the theme was chosen because for the Jesuits “it is not a question of looking back, nor of exalting the figure of Ignatius of Loyola. Inspired by his experience, we seek to identify ourselves with the person of Jesus Christ, the only Lord, in such a way that we may be in tune with the endearing gaze of the one who gave his life for all human beings so that we may show the way to life in freedom.”

Claretian Missionary Sister Jolanta Kafka, president of the women’s International Union of Superiors General and author of the book’s prologue, said there are at least 70 women’s religious orders that define themselves as Ignatian, but beyond that “it would be hard to find even one sister” in any order who has not benefited from the spiritual insights of St. Ignatius.

The Spanish saint’s teaching on how to discern God’s will in order to better serve people in a certain time and place is an ongoing gift to the church, Sister Kafka said, especially because it sees discernment not only as an individual exercise of observation and prayer, but also as the exercise of a community like a religious congregation.

Pope Francis, probably the most famous Jesuit living today, has asked the Jesuits to be more generous in teaching other Catholics how Ignatian discernment works.

Menor asked Sosa what it is like for the Jesuits to have one of their members as pope.

“No one ever thought there would be a Jesuit bishop of Rome,” he said. “For the Society (of Jesus), in any case, the pope is the pope whatever his background and whoever he is.”

Having a Jesuit pope may be “a disadvantage” for the Jesuits, he said, “because he has to be careful not to give the impression that he has a preferential relationship with the Society.”

In the book, Father Sosa spoke repeatedly about the growing percentage of people in the world who are not religious, making a distinction between “secularism,” which pushes religion aside and the widespread process of “secularization.”

The decline of formal religious affiliation “is the situation we are in, and we should evaluate what’s positive about it and try to respond to it,” he said. The “good aspects” include moving from religious identity as a sociological or cultural label one is born into to being a “free choice” an individual makes and commits to.

Christian communities grow and are invigorated when their members want to be there, he said. “That’s why, in a secularized society, we are called to encourage and support people who are searching, to present the Gospel and what it offers, to foster authentic experiences of faith and help people make choices from a place of freedom.” 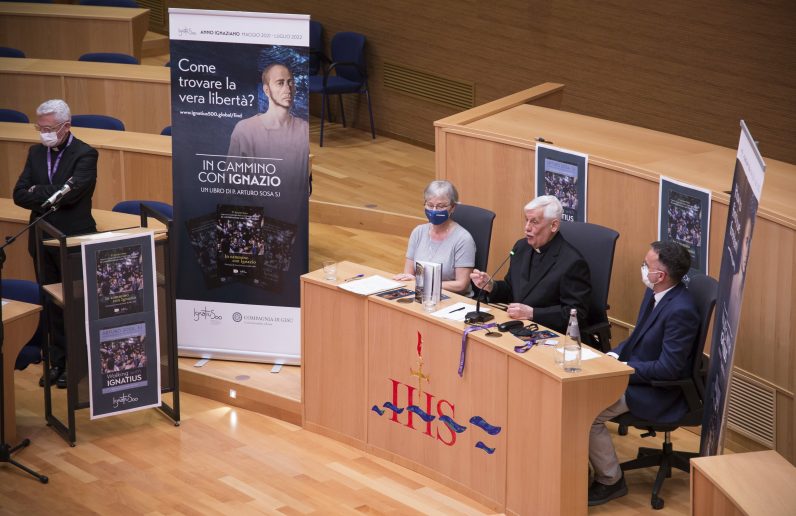 Father Arturo Sosa, superior general of the Jesuits, speaks during the presentation of the book, “Walking with Ignatius,” in Rome May 11, 2021. The book is based on an interview journalist Dario Menor conducted with Father Sosa. It anticipates the May 20 opening of a special Ignatian Year marking the 500th anniversary of the conversion of St. Ignatius of Loyola, founder of the Jesuits. (CNS photo/courtesy General Curia of the Society of Jesus)

NEXT: Riding the green wave: Momentum for Laudato Si’ rises for next decade