Volunteers are the lifeblood of nonprofit organizations, but the constant cycle of recruiting, scheduling and orienting newcomers can be a challenge to forward momentum. Similarly, for many individuals seeking to donate their time and talent, it’s not enough to fill a slot on a schedule; they long to contribute in meaningful ways.

Fortunately, in the Philadelphia/South Jersey area and across the country, the Ignatian Volunteer Corps (IVC) meets the needs of both agencies and volunteers while advancing the healing and rebuilding of local communities. 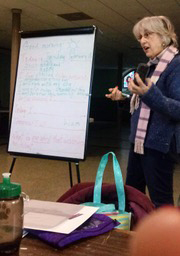 Ignatian Volunteer Corps member Joan Aspan of Havertown teaches English as a Second Language in her placement with the ADROP organization — Augustinian Defenders of the Rights of the Poor.

Joan Aspan of Havertown teaches English for Speakers of Other Languages at the Augustinian Defenders of the Rights of the Poor (ADROP) in South Philadelphia, where she began her IVC service just three weeks before COVID-19 forced classes online. Although she had no experience with virtual classrooms, Aspan’s 40-year career as an “itinerant elementary music teacher” in dozens of schools gave Joan an important transferrable skill: the ability to keep asking the question, “Now, how do I get this individual to learn this thing?”

Her ingenuity and perseverance paid off. As Executive Director Lacie Michaelson Fischley observed, “Joan expertly plans fun and engaging classes for her students,” adding, “most importantly, she keeps coming back. The students have advanced tremendously because of Joan’s consistency, their shared relationship, and her commitment to social justice.”

That combination of proficiency and stability makes the IVC model a perfect fit for ADROP’s needs.

Here’s how it works. The Ignatian Volunteer Corps matches individuals aged 50 and over with service providers who need their expertise. Corps members volunteer one or two days each week for 10 months a year; partner organizations pay a modest annual stipend, which supports IVC’s local and national operation.

In addition to their service, corps members gather regularly for shared spiritual formation and reflection, enabling them to be true “contemplatives in action.”

In the IVC Philadelphia/South Jersey region, Director John Green explains that placements focus on five key areas: housing, food security, access to education, immigrant sanctuary, and support to those experiencing physical or mental health issues. Green considers his corps members to be leaders of change, offering vital resources to organizations, churches and schools at the heart of struggling communities.

IVC members not only become the backbone of an agency’s volunteer pool, they also serve as role models for younger paid staff.

North Philadelphia’s Sanctuary Farm employs “members of the community who often have little, if any, work experience,” said Executive Director Andrea Vettori. She deeply appreciates the contribution of second year IVC member Porter Bush of Elkins Park, who “helps to set an example and educate those new to the workforce about what is expected of them.”

Retired from a career in foodservice management, Porter appreciates seeing the joy on neighbors’ faces when they receive freshly picked produce at Sanctuary’s free biweekly farm stand. He also enjoys learning new things — like figuring out how to construct a shade structure that will keep farm stand volunteers cool while supporting solar panels on its roof. 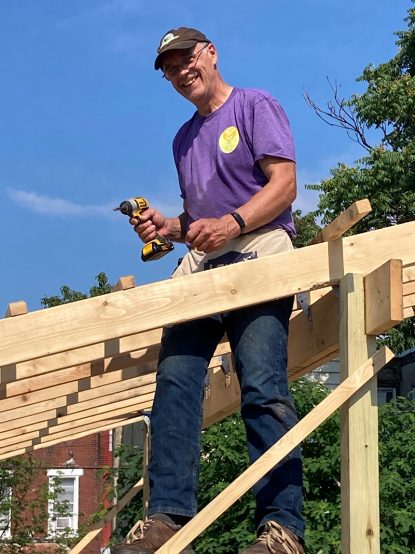 When John Kearney of Cherry Hill, N.J. retired from his career as a trial lawyer, he saw joining IVC as a way to reconnect with his Jesuit education. Kearney is in his fourth year of teaching at Esperanza College of Eastern University, which serves the Hispanic population in Philadelphia’s Hunting Park section.

Drawing on his decades in front of juries, Kearney teaches public speaking, which he describes as an exercise in building students’ self-confidence. “No one ever said to them, ‘you can do this,’” he said.

Lacking the technology many people take for granted, his students during the pandemic have been taking up to four courses on an iPhone while working full time. Kearney’s personal mission is clear: to help each student become a little bit better.

For all the IVC members, finding new ways to use their gifts is incredibly rewarding. Yet they agree that the “value added” component of the Ignatian Volunteer Corps is their commitment to regular prayer and reflection as a community.

Kearney describes his surprise and appreciation for being able to talk through the challenges and philosophical grounding of his service. Whether discussing systemic racism, intercultural differences, or the state of Catholicism in America, the group doesn’t always agree, and he finds that encouraging. “It’s not just an echo chamber,” he said.

Aspan concurred, noting that she appreciates the Jesuit connection, as IVC’s Ignatian charism is at the heart of her spirituality.

Even as a work supervisor, Vettori  of Sanctuary Farm recognizes that spiritual value. Despite Porter’s impressive array of skills, she said, “the most important asset of an IVC volunteer is the spiritual underpinning that is informed and challenged by their service experiences and processed and nourished by their volunteer colleagues.”

IVC, she said, “has truly been a blessing to our organization and to the community we serve.”

With over 600 members working in more than 300 partner agencies in 19 regional offices across the country, IVC is responding to the profound needs America faces in this time of pandemic, economic crisis and social injustice. Recruitment of both corps members and partner agencies is underway now for the coming service year, which begins in September.

To learn more about the Philly/South Jersey region, contact John Green, jgreen@ivcusa.org. To see all the cities where IVC serves or to explore the possibility of a virtual placement beyond IVC’s geographical footprint, visit their website and learn how experience can make a difference.

PREVIOUS: Amid the ashes of their church, St. Leo members find their parish