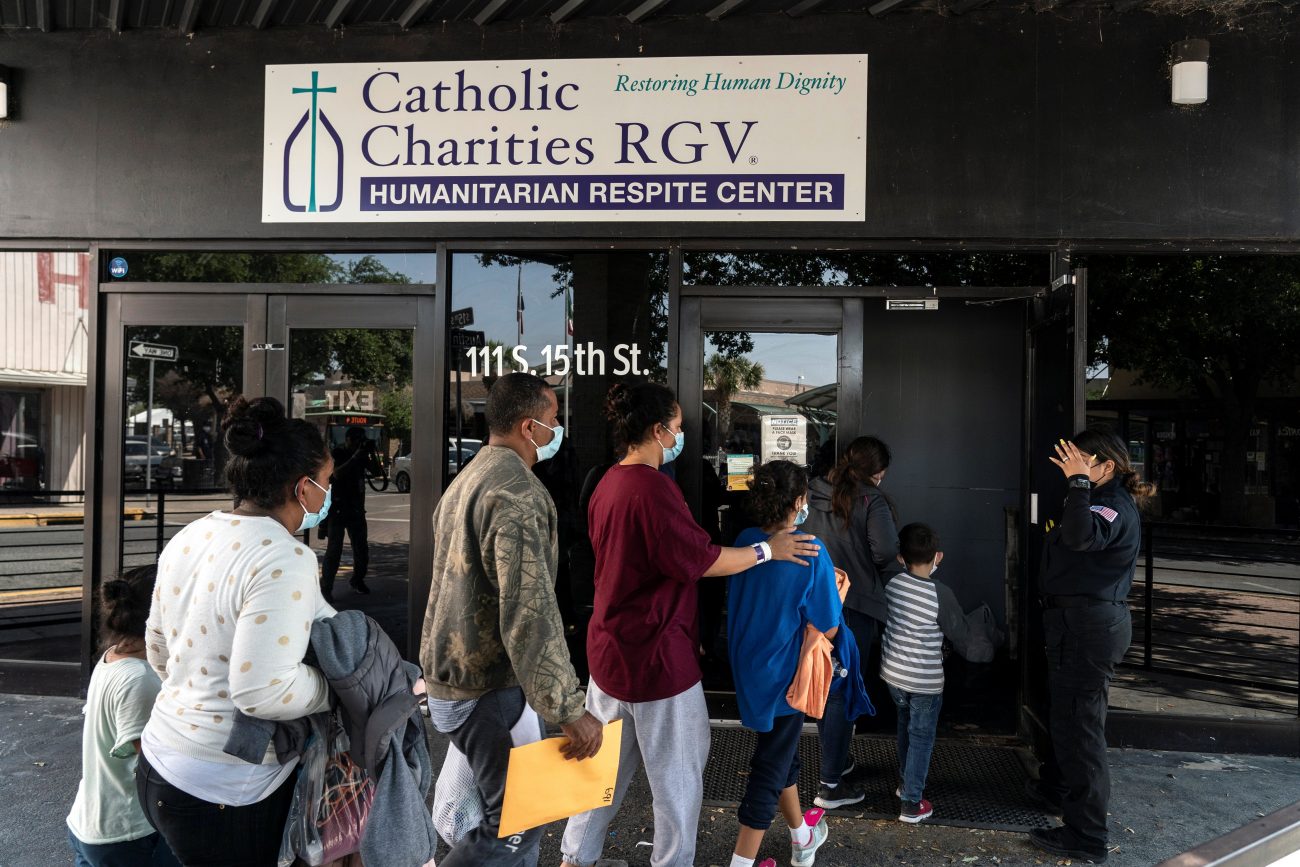 Dozens of area women religious are teaming up with more than 200 nuns from across the nation to bring hope to migrants at the U.S.-Mexico border.

Since May, some 34 Sisters, Servants of the Immaculate Heart of Mary (IHM) have been traveling to Catholic Charities USA (CCUSA) shelter operations near San Diego to give food, clothing, pastoral support and transportation to thousands of asylum seekers. Joining them are women religious from over 100 congregations, with volunteers working for anywhere from two weeks to two months, according to their availability.

CCUSA’s ongoing outreach has been offering critically needed humanitarian aid to record levels of migrants fleeing violence, drug trafficking, poverty, persecution, war and natural disasters. In addition to its San Diego shelters, CCUSA also provides border services in the dioceses of Tucson, Brownsville and Laredo, and in the Archdiocese of San Antonio.

That aid is more needed than ever as soaring numbers of migrants have entered the country in recent months. With the reversal of the “Remain in Mexico” policy earlier this year, asylum seekers can now stay in the U.S. during their immigration proceedings, as was the case prior to January 2019. According to U.S. Customs and Border Protection (CBP), some 180,000 unauthorized crossings took place in May along the nation’s southern border, a 76% increase since February.

In March, CNN reported that based on internal government data it had reviewed, up to 1.1 million single adults, 828,000 families and more than 200,000 unaccompanied children were expected at the border through September.

Under a controversial section of Title 42, the majority of those trying to cross the border are expelled due to COVID public health protections, and CBP noted that multiple attempts to enter are spiking statistics on migrant encounters.

Still, officials concur there has been a dramatic surge in the number of individuals hoping to enter the U.S. – and the IHMs, along with their fellow (and fully vaccinated) sisters, are ready to help.

While a main goal of the CCUSA outreach is to connect migrants with family members in the U.S., the volunteers’ tasks are “somewhat different every day,” said IHM Sister Kathy Benham, who coordinates her order’s center for literacy at St. Francis de Sales Parish in West Philadelphia.

Sister Kathy spent three weeks in late April and early May assisting at CCUSA’s site near El Centro in Southern California. Migrants typically arrive having spent “three to five days” at CBP stations where they “couldn’t take showers or brush their teeth, and were sleeping many times on concrete floors,” she said. 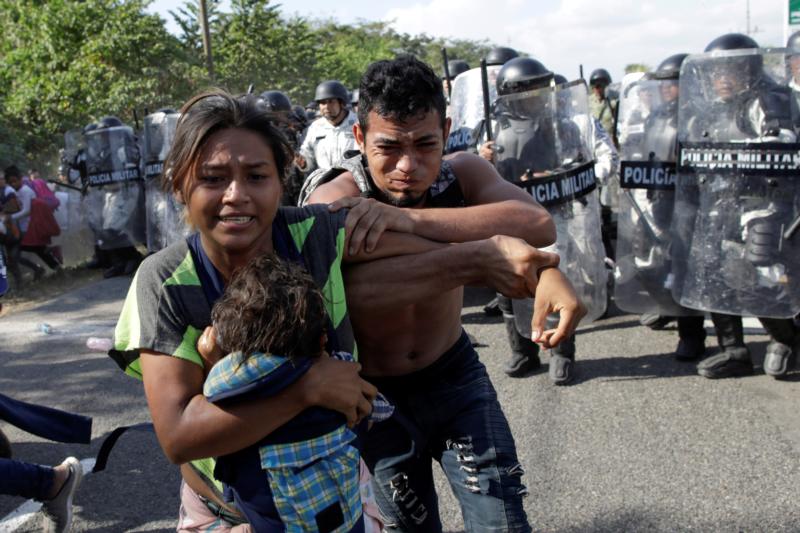 Migrants from Central America trying to reach the United States react as police approach them near Frontera Hidalgo, Mexico, Jan. 21, 2020. According to a February 2020 report from Human Rights Watch, at least 138 Salvadorans were murdered after being deported back to country from the United States. (CNS photo/Andres Martinez Casares, Reuters)

“They come in exhausted, just totally exhausted,” said Sister Mary Elaine Anderson of the IHM order’s Scranton congregation, who has been at the border since late April and plans to stay until early July.

Individuals testing positive for COVID are transferred to one of the two hotels used by CCUSA to house migrants during their short stays, said Sister Kathy, noting that COVID-free clients have just 48 hours for their U.S.-based family members to arrange air fare.

In the meantime, the sisters sort through clothing donations and make sure migrants are outfitted for their journey.

“People arrive with just the clothing on their back,” she said. “A lot of times, they need shoelaces, since those are taken from them at the border.”

The sisters also ensure that migrant children have a space with toys, art supplies and juice so they can enjoy some playtime while parents meet with case workers.

Families are then taken to their hotel rooms, where they can eat, sleep on a bed and use “a private bathroom,” said Sister Mary Elaine.

After “helping to verify where they were going,” the sisters drive the migrants to the airport and “help them get boarding passes,” she said.

Since many of the IHM volunteers have served in South America, they’re able to communicate easily with Spanish-speaking migrants, said Sister Kathy – but the mix of tongues encountered at the border, including Asian and African languages, reveal what the United Nations calls a “new high” in global displacement despite the COVID pandemic. 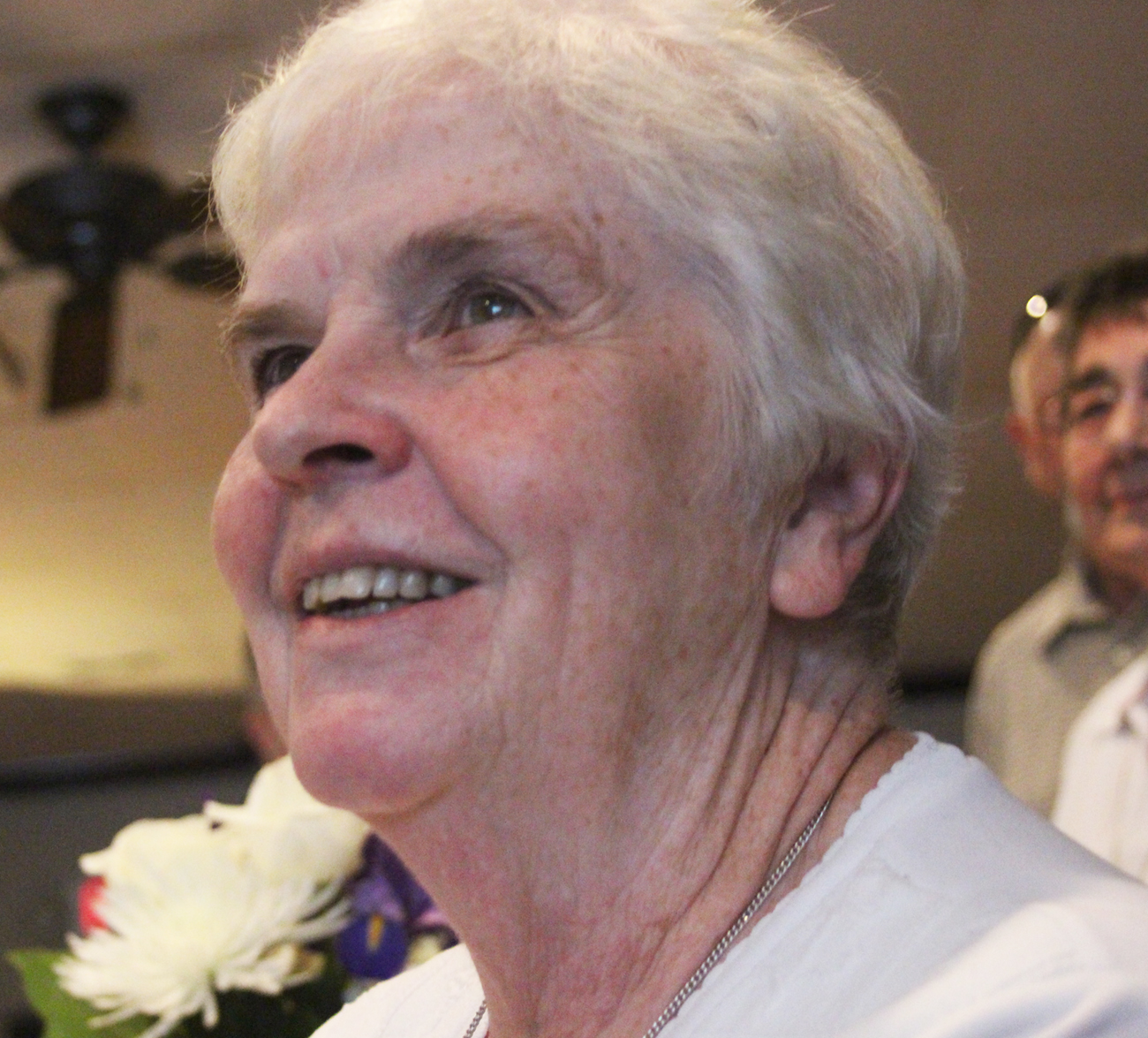 Immaculate Heart of Mary Sister Rose Patrice Kuhn (seen here in this May 22, 2021 photo) said the scars of the migrants’ flight from violence and poverty can linger for years. (Gina Christian)

“Many of the people coming are from Venezuela, Brazil, Pakistan, (Democratic Republic of the) Congo and Haiti,” said Kristan Schlichte, CCUSA’s senior director of membership.

For those hailing from overseas, the trek to the U.S. border can span years, she added.

“Some of those from Africa and Pakistan have to keep earning to pay for the next leg of the trip,” said Schlichte. “It may take them three years to get from Argentina to Mexico as they keep working, doing whatever they can find, such as farm labor.”

And the scars linger, said IHM Sister Rose Patrice Kuhn, who will head to El Centro in July.

During her years of Hispanic ministry in the Philadelphia area (preceded by mission assignments in Chile and Peru), Sister Rose has met migrants still suffering from their crossing experiences. One woman, some 15 years in the U.S., admitted to her she had been raped en route.

“She was violated, she was abused; she started to sob,” Sister Rose said. “That memory doesn’t go away. Somebody touched her forever in a negative way.”

Only the beginning of the journey

Getting to the U.S. is only the beginning of another long journey, said the sisters.

“They have ankle bracelets on when they get to their families, and they must make their immigration court dates,” said Sister Kathy. “And they can still be deported.”

With families coming in stages, relationships among members can become strained, particularly with regard to children, Sister Rose said.

One little boy she’s met struggles to reconnect with his parents, who had lived in the U.S. for several years while he stayed with his grandmother. 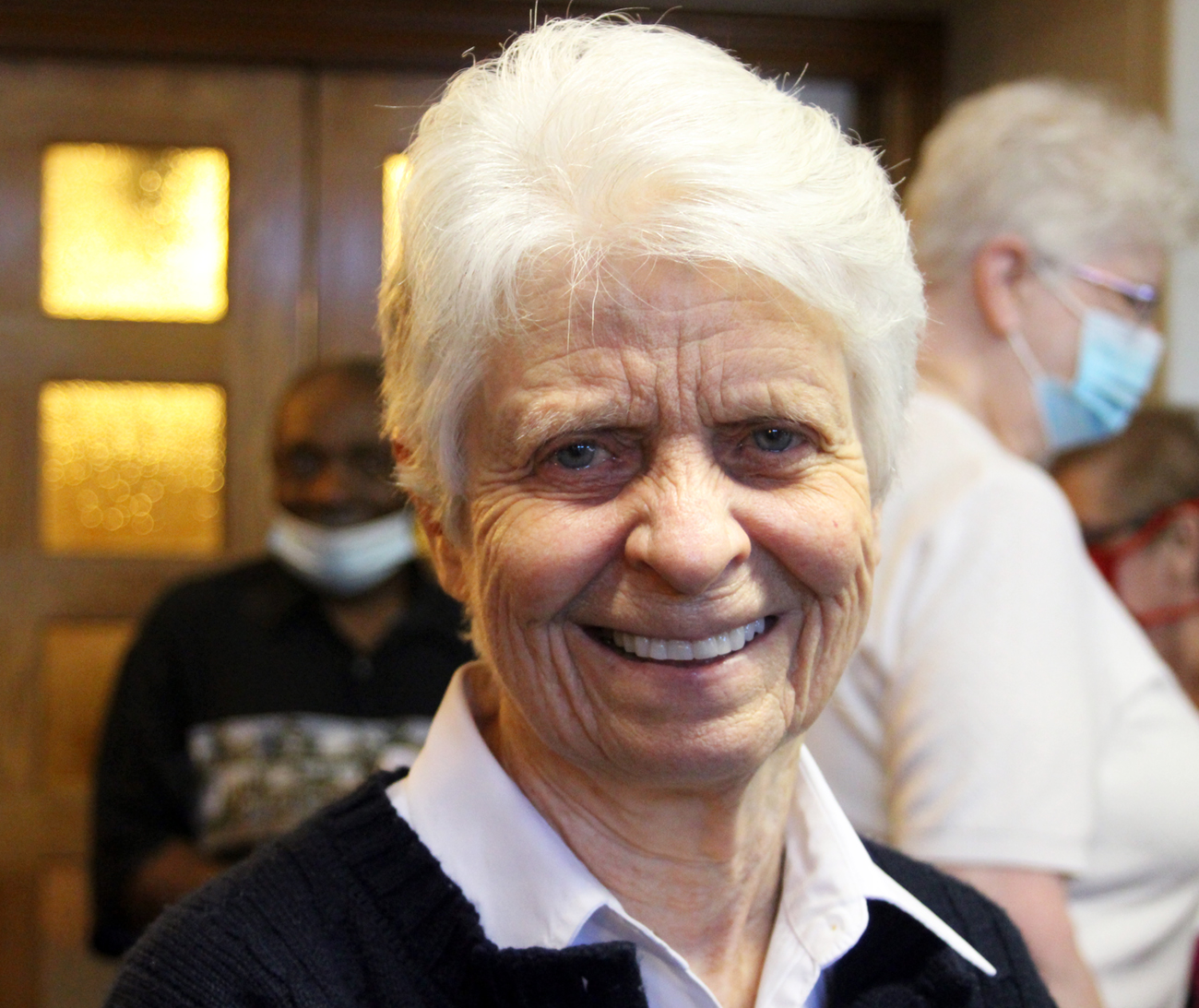 Immaculate Heart of Mary Sister Eileen Reilly (seen here in this May 22, 2021 photo), part of the Mother of Mercy House mission team in Philadelphia, has just headed to the U.S.-Mexico border to volunteer for several weeks at a Catholic Charities USA migrant shelter. (Gina Christian)

Yet conditions in their countries of origin leave families with little choice, said Sister Rose.

“They’re coming here for their own safety, because in a lot of these places it’s just too dangerous for them,” she said.

“Being pregnant, traveling with children and young babies – you have to be desperate to do this,” said Sister Kathy.

That plight intensifies the sisters’ desire to give migrants a “radical welcome,” said Sister Mary Elaine.

And the women religious volunteering for CCUSA are uniquely equipped to do just that, said Schlichte.

“Most of these women are retired after many years of ministry, so they know how to relate to people,” she said. “They have a special way of connecting with them, even if the migrants can’t speak English or the sisters don’t speak Spanish. There’s a bond of faith that connects them.”

Through their practical and prayerful support, the sisters have been “arbiters of grace” for those they serve, said Schlichte.

Collaboration among congregations has deepened an overall sense of mission, said Sister Mary Elaine, while serving at the border has been “a real moment of evangelization,” said Sister Kathy.

One lay volunteer, a former CBP agent himself, “couldn’t get over what we were able to accomplish,” she said. “We even said, ‘Now do you have a different idea of sisters?’” 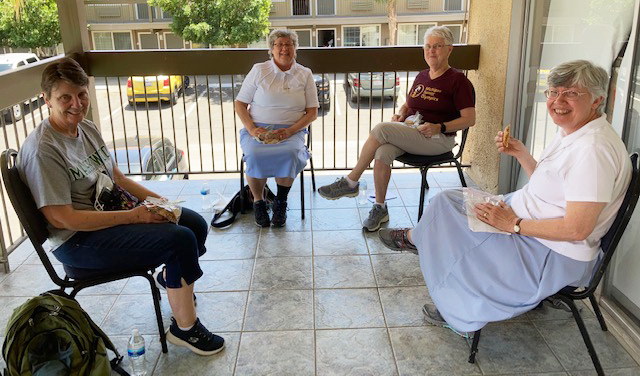 Sisters from three Immaculate Heart of Mary Congregations take a short break from their volunteer assignments with Catholic Charities USA at the U.S.-Mexico border. (Courtesy of Sister Kathy Benham, IHM)

NEXT: Court dismisses move to stop Hallahan transition by archdiocese