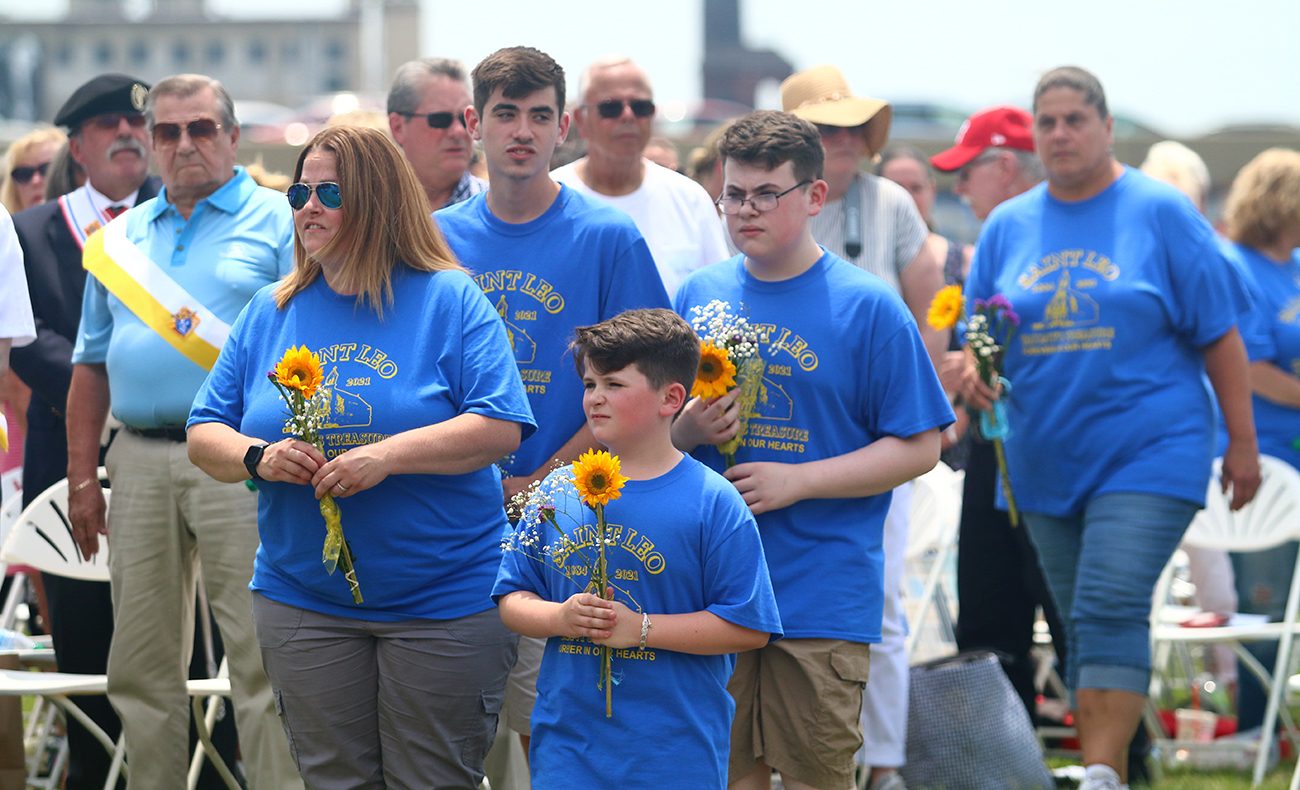 Members of the former St. Leo Parish in Philadelphia's Tacony section line up to place flowers before a statue of the Blessed Mother during a June 19 Mass of remembrance celebrated by Archbishop Nelson Pérez before the ruins of the landmark church, which was gutted in a May 9 arson.

More than 600 gathered last weekend to mourn the loss of a beloved Northeast Philadelphia church – and to rediscover what it means to be a parish, even without a house of worship.

On Saturday, Archbishop Nelson Pérez celebrated an outdoor Mass of remembrance for the former St. Leo the Great Church in the city’s Tacony section. Built in 1884, the landmark structure was destroyed in a May 9 fire that also gutted the St. Leo rectory, home to permanent Deacon Pascual Mota and his family since 2016.

(View photos of the June 19 Mass of remembrance for St. Leo Church.)

The blaze was quickly ruled arson by authorities, who continue their investigation.

Following a July 2013 merger with nearby Our Lady of Consolation Parish, St. Leo had been a worship site, but due to high maintenance costs the church was closed in December 2018. The building was sold April 6 to New York-based real estate developer David Damaghi, who said he had planned to lease it to a performing arts organization.

With the rubble behind them, Archbishop Pérez and several concelebrants – including Father Joseph Farrell III, St. Leo’s final pastor and currently pastor of Our Lady of Consolation –  offered the bilingual June 19 liturgy at the invitation of former parishioners, the Tacony Civic Association, City Councilman Bobby Henon, and other officials, including State Rep. Michael Driscoll.

Most of those in attendance wore bright blue T-shirts with an image of St. Leo and the caption “Tacony’s treasure, forever in our hearts.”

Flags, flowers and the St. Leo Parish mission statement were laid before the altar during the entrance procession, along with a statue of St. Joseph in honor of the Sisters of St. Joseph, who had long served the parish. Several of the sisters themselves were on hand; others joined the more than 1,500 who have so far viewed a Facebook video recording of the liturgy.

Just before the opening prayers, members of the school’s class of 1966 placed a wreath before the ruined church as bagpiper Joe Tobin played “Amazing Grace,” and some 40 parishioners laid flowers before a statue of the Blessed Mother after the liturgy.

During his homily, as he surveyed the rows of faithful seated in the park across from the church, Archbishop Pérez described the gathering as “bittersweet.” 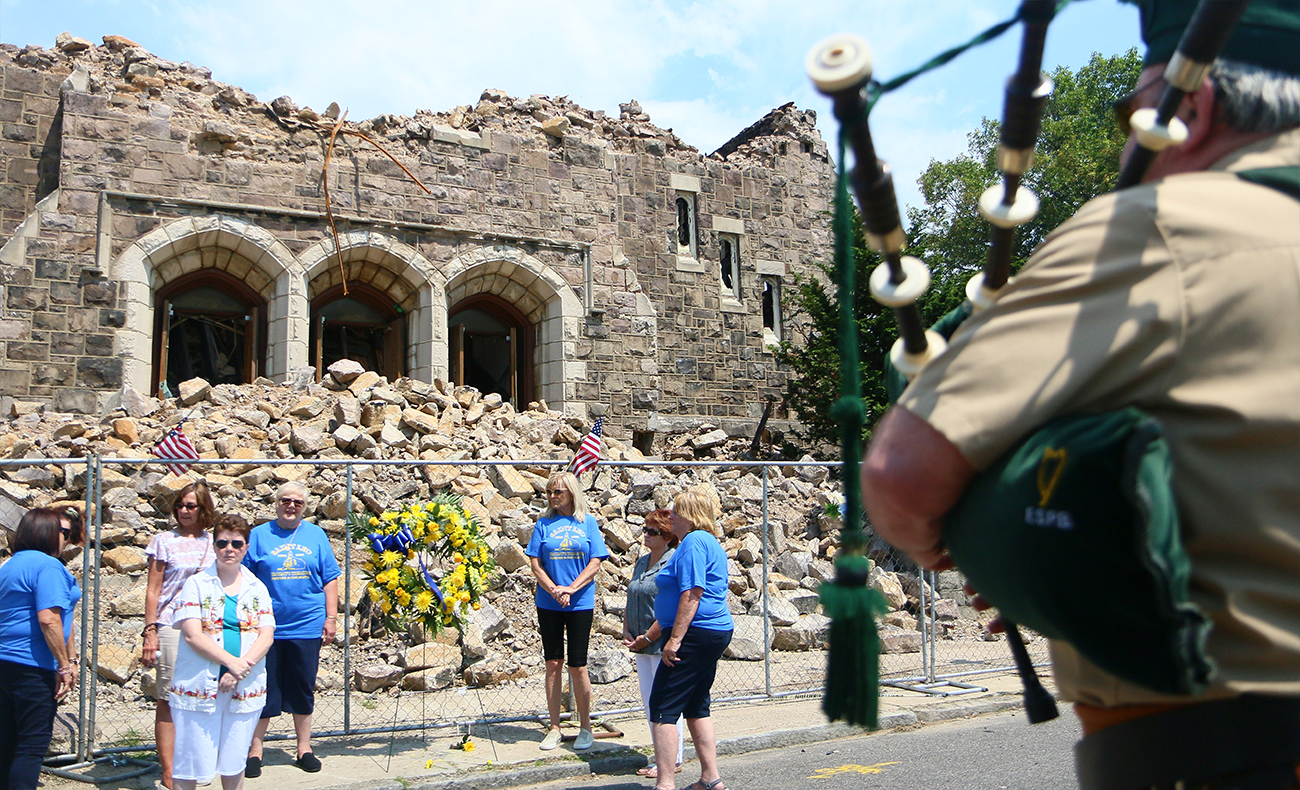 Members of the St. Leo Parish School Class of 1966, accompanied by bagpiper Joe Tobin, lay a wreath at the ruined former Northeast Philadelphia church, destroyed in a May 9 arson, during a June 19 Mass of remembrance celebrated by Archbishop Nelson Pérez. (Sarah Webb)

“Yes, it is bitter to sit there and watch the remnant of a building that you loved so much, and that was so much a part of your own upbringing and your own journey,” he said.

The experience was particularly painful for the Mota family, “who lost their home,” he added.

At the same time, he said, there was “a sweetness of being (there) and of seeing each other. … A kind of sadness on the one side, but also the joy of being together.”

Pointing to a statue of St. Leo before the altar, Archbishop Pérez challenged those present to consider “which St. Leo” they sought to commemorate.

Most of the parishioners likely knew little about their fifth-century patron saint, he said — and with their church building destroyed, they had been compelled to discern “something deeper than our structures,” said the archbishop. 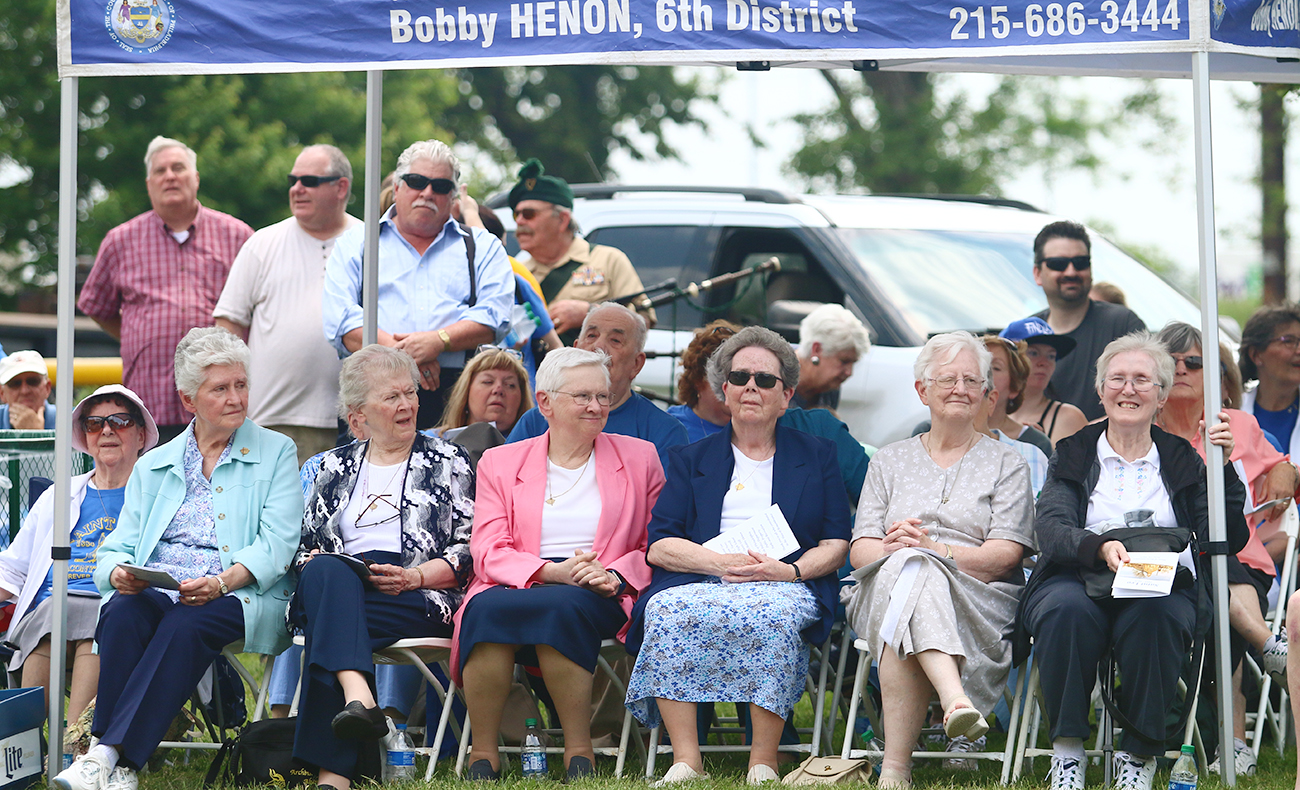 Several Sisters of St. Joseph who had taught at the former St. Leo Parish School were on hand for the June 19 Mass of remembrance. (Sarah Webb)

In his welcoming remarks, Father Dennis Gill, director of the archdiocesan Office for Divine Worship, agreed, saying while “our church buildings are very important to us … we gather as the Church ourselves.”

Between tears and smiles, attendees fondly recalled decades of parish life, making the past present by recounting their favorite memories. A number of former parishioners shared photographs from their years at St. Leo’s church and school.

“I have my kindergarten picture with me,” said Sister of St. Joseph Mary Boyer, whose family had belonged St. Leo for close to 190 years. “My grandmother was married in the church, my mother was married here. Everybody in our family went to St. Leo.”

Seeing the remains of the church was heartbreaking, she admitted.

“Everything that is important in our life (was) in that building,” she said through tears. “That’s where my life was. My vocation was inspired by my third-grade sister.”

Fellow Sister of St. Joseph Eileen Cooke, who taught at St. Leo School during the late 1960s and early 1970s, said her “heart was pulled” as “all the memories streamed back.”

State Rep. Driscoll pointed out “buildings come and go, but the spirit of the people can live on.”

Deacon Mota – who assisted at the Mass, having been ordained the week after the fire — said it was “overwhelming to see the community come back.” 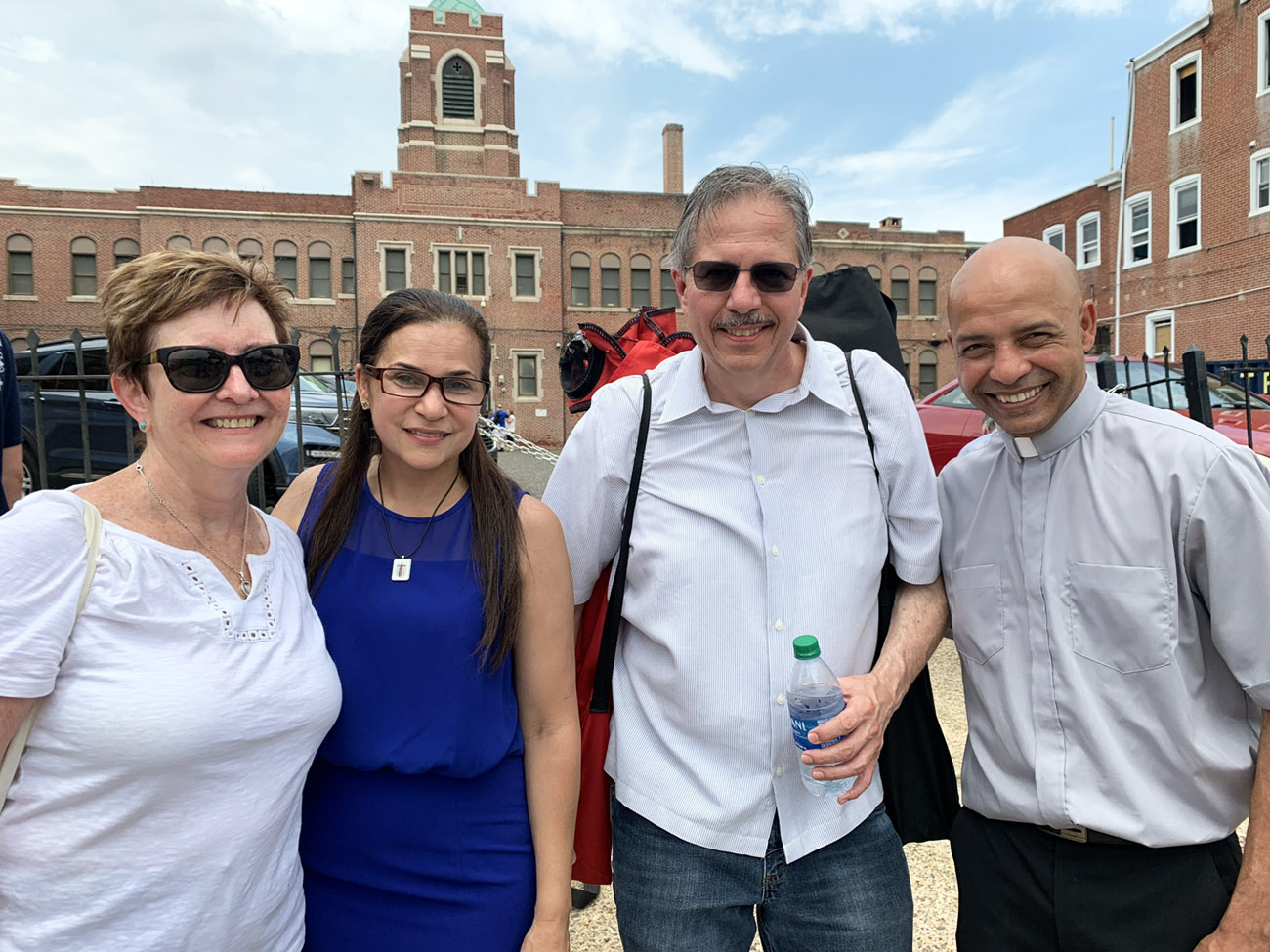 Maureen and Emile Nemchik (far left, second right) joined permanent Deacon Pascual Mota (far right) and his wife Reyna (second left) at a June 19 Mass of remembrance for the former St. Leo Church in Philadelphia, which was destroyed in a May 9 arson that also gutted the Motas’ home, the former parish rectory, a portion of which can be seen at right. (Gina Christian)

“It’s like a city coming together as a small town,” said Deacon Mota, whose son Miguelangel joined him as an altar server. “You don’t see that every day. The brotherly love is still there; we didn’t lose that.”

His wife Reyna, who proclaimed the word in Spanish at the liturgy, said she was “100% sure that God, when he changes something, builds something better.”

“This was the church where my kids were baptized and confirmed, where I was married,” she said. “But we are standing, we are working, we are in the community. God is great. I know we don’t have a house, but we have a home.”

Clare and Tom Sweeney, whose children were fourth-generation parishioners, said the fire had made the St. Leo community “stronger.”

Speaking after the Mass, Father Farrell said despite the “tragedy of what happened … we still have joy in our hearts.”

Ann Marie Kuvik — a lifelong parishioner who spearheaded arrangements for the remembrance Mass — seconded that.

“Our faith, our love for another, and being part of this wonderful community filled with light can and will get us through this time of darkness,” she said. “We are the people of St. Leo. … We have a light burning in our hearts that will not be dimmed by this tragedy.” 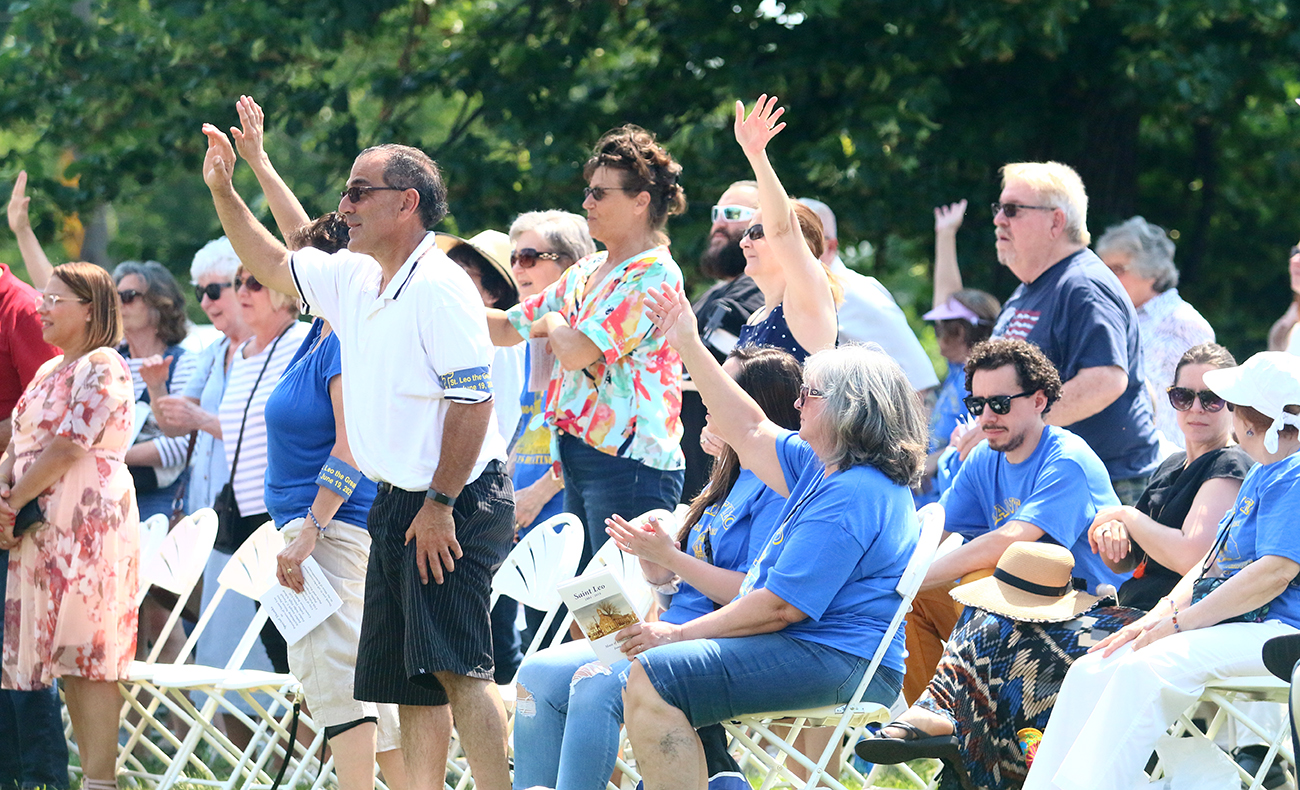 Attendees at a June 19 Mass of remembrance for the former St. Leo Church in Philadelphia, destroyed by a May 9 arson, show their support during a homily delivered by celebrant Archbishop Nelson Pérez. (Sarah Webb)

NEXT: For Ignatian volunteers, experience makes the difference