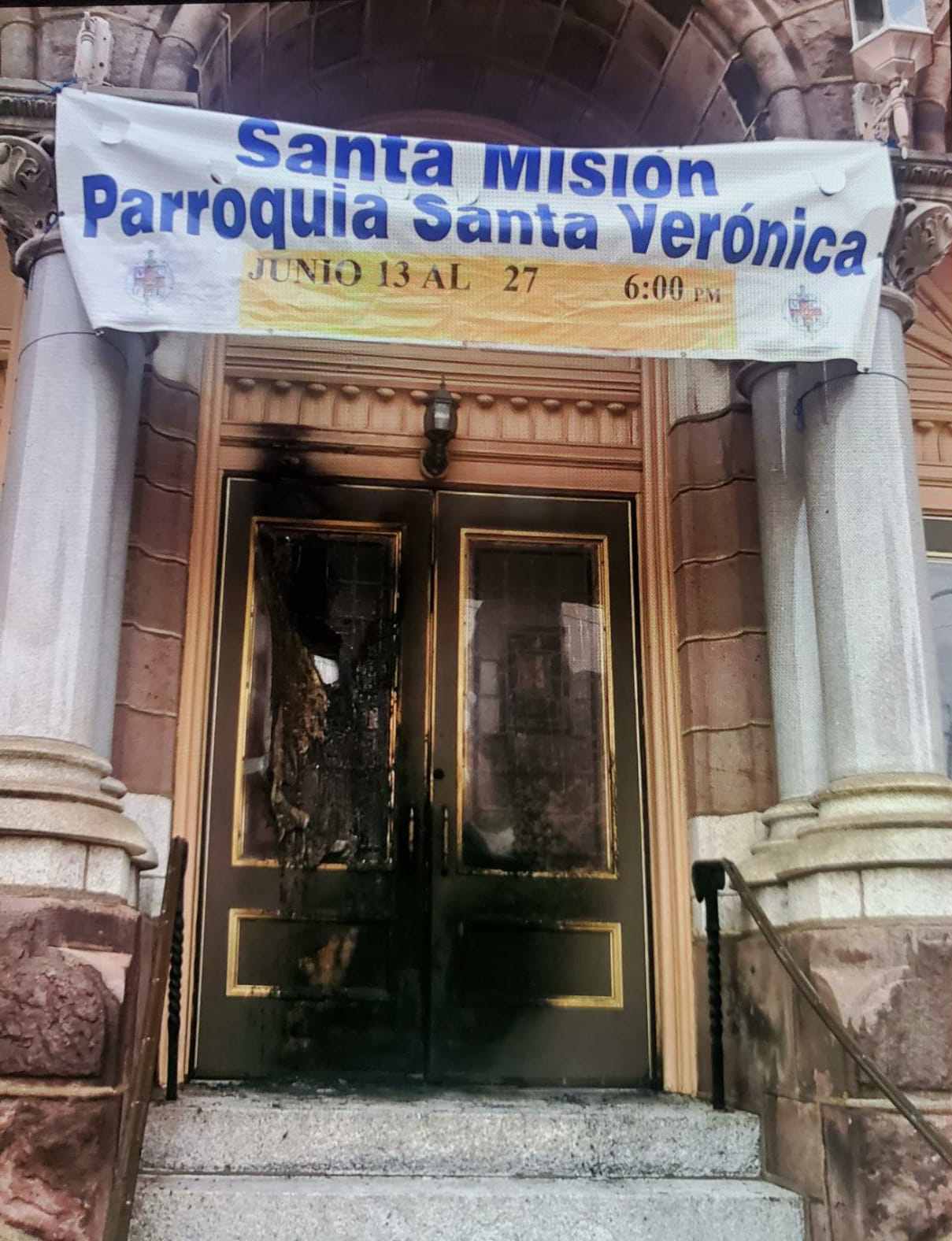 Two exterior doors at the church in the city’s Franklinville section were badly scorched in an early morning blaze June 19, with the stained glass panel of one shattered and its frame warped. No injuries were reported.

According to the parish’s pastor, Incarnate Word Father Joseph LoJacono, a quick-thinking neighbor spotted the flames around 2:30 a.m. and called the Philadelphia Fire Department.

A preliminary report from officials listed “some kind of incendiary device” as the cause, said Father LoJacono.

Videos of the scene taken from security cameras at St. Veronica School are under review, he said, and the parish is also trying to obtain video from a market across the street.

Anyone with information on the fire is asked to submit tips to the Philadelphia Fire Department at https://bit.ly/PHLarsontips; the Philadelphia Police Department by calling or texting 215-686-TIPS, or emailing tips@phillypolice.com; or the ATF at 1-888-ATF-TIPS or ATFtips@atf.gov.

Father LoJacono said he’s unsure as to who is behind the attack, or why the parish was targeted.

“No one in particular has threatened St. Veronica’s Church recently,” he said.

Hours after the fire, Archbishop Nelson Pérez celebrated an outdoor Mass of remembrance opposite the rubble of the former St. Leo Church, which was leveled in a May 9 blaze ruled as arson and still under investigation. An ATF official contacted by CatholicPhilly.com has said authorities do not believe the two church fires are connected.

The St. Veronica attack comes amid what Father LoJacono calls “a popular parish mission” that includes “going door to door to everyone in (the) parish, (with) youth activities, mission talks with Masses, and other outreaches.”

Some 40 members of the Incarnate Word religious family, including priests and several sisters of the Servants of the Lord and the Virgin of Matara, are overseeing the effort, said Father LoJacono.

“Most nights we have a rosary procession in the streets,” he said, adding that on Saturday the group had taken a relic of the true cross to Kensington and Allegheny Avenues, located just beyond the parish boundaries — and widely considered the epicenter of Philadelphia’s ongoing opioid addiction crisis. 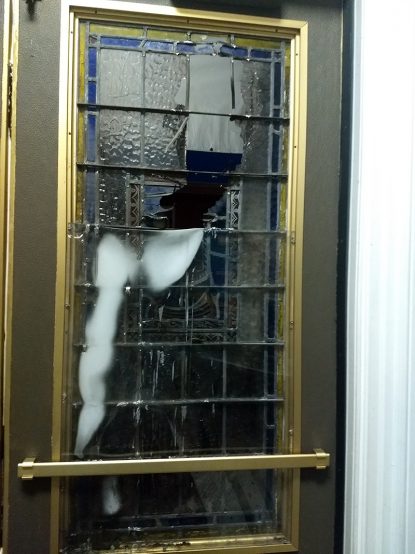 An view from the inside of the main doors at St. Veronica Church in North Philadelphia show the fire damage from an apparent arson. (Photo by Father Joseph LoJacono, I.V.E.)

Once there, the missioners “(passed) out rosaries and Miraculous Medals” as part of “(bringing) the presence of Christ” to the troubled streets, said Father LoJacono.

He views the arson attempt as “a thorn in the flesh” meant to “purify” the group, while calling them “to renew and strengthen (their) missionary endeavors.”

“We take this as a sign that the devil does not like our outreach in the area and the ministry of St. Veronica Parish,” he said. “Thus, it represents a good sign that we are affecting the people in the area.”

The mission will continue as planned this coming week, he said.

“We pray for whoever committed this act and for the truth to come out about who did it,” said Father LoJacono. “We go forth with the cross of our Lord Jesus Christ and the rosary in our hands. We trust and pray that this act will increase our faith.” 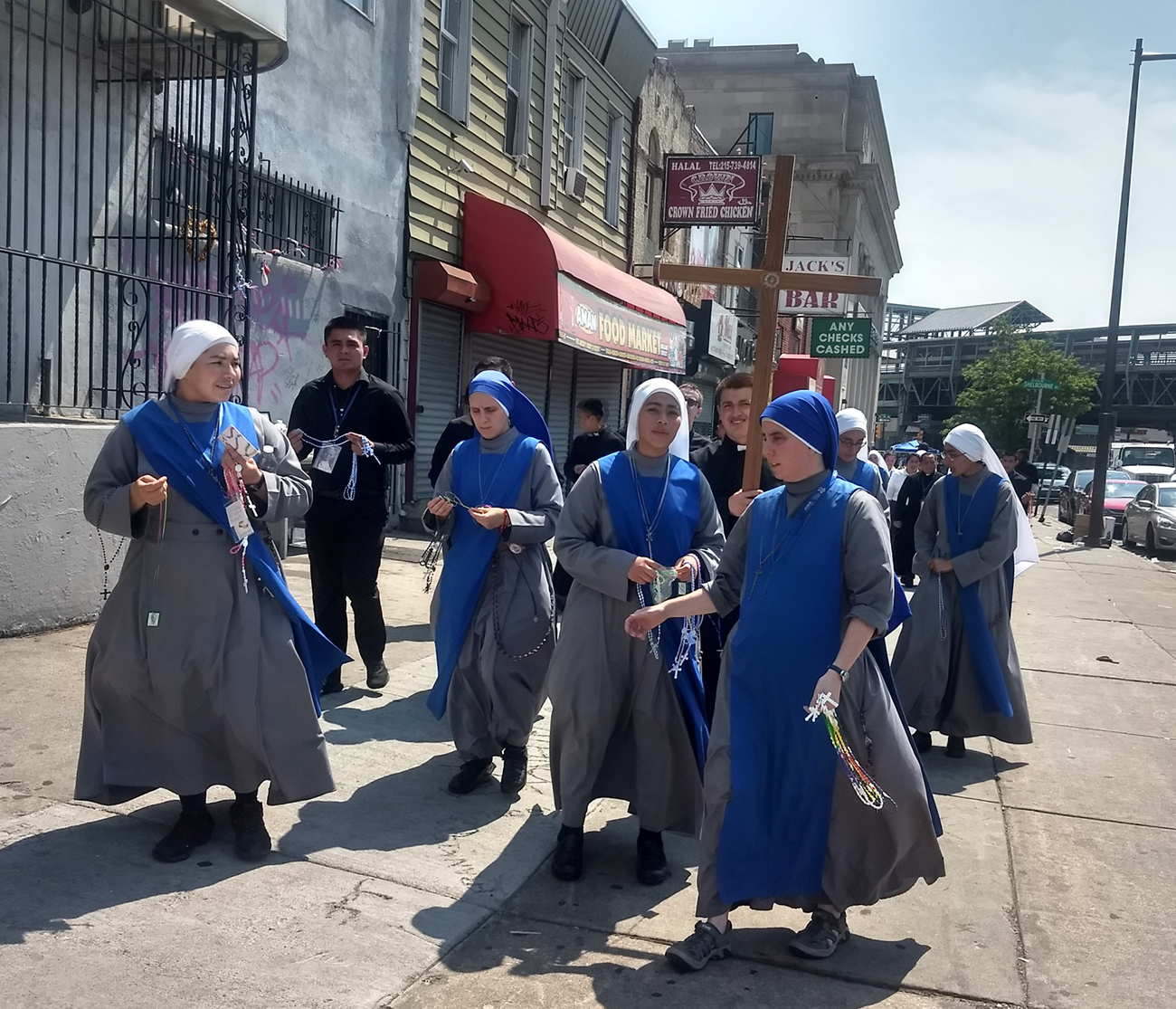 A relic of the true cross is carried during a June 19 procession through Philadelphia’s Kensington neighborhood, part of a two-week mission organized by St. Veronica Parish and overseen by priests and sisters of the Incarnate Word religious family. (Photo by Father Joseph LoJacono, I.V.E.)

PREVIOUS: Frazzled as a father? It’s OK to ask for help in being a dad, says social worker

NEXT: PreK graduates off to ‘greatness and good things’