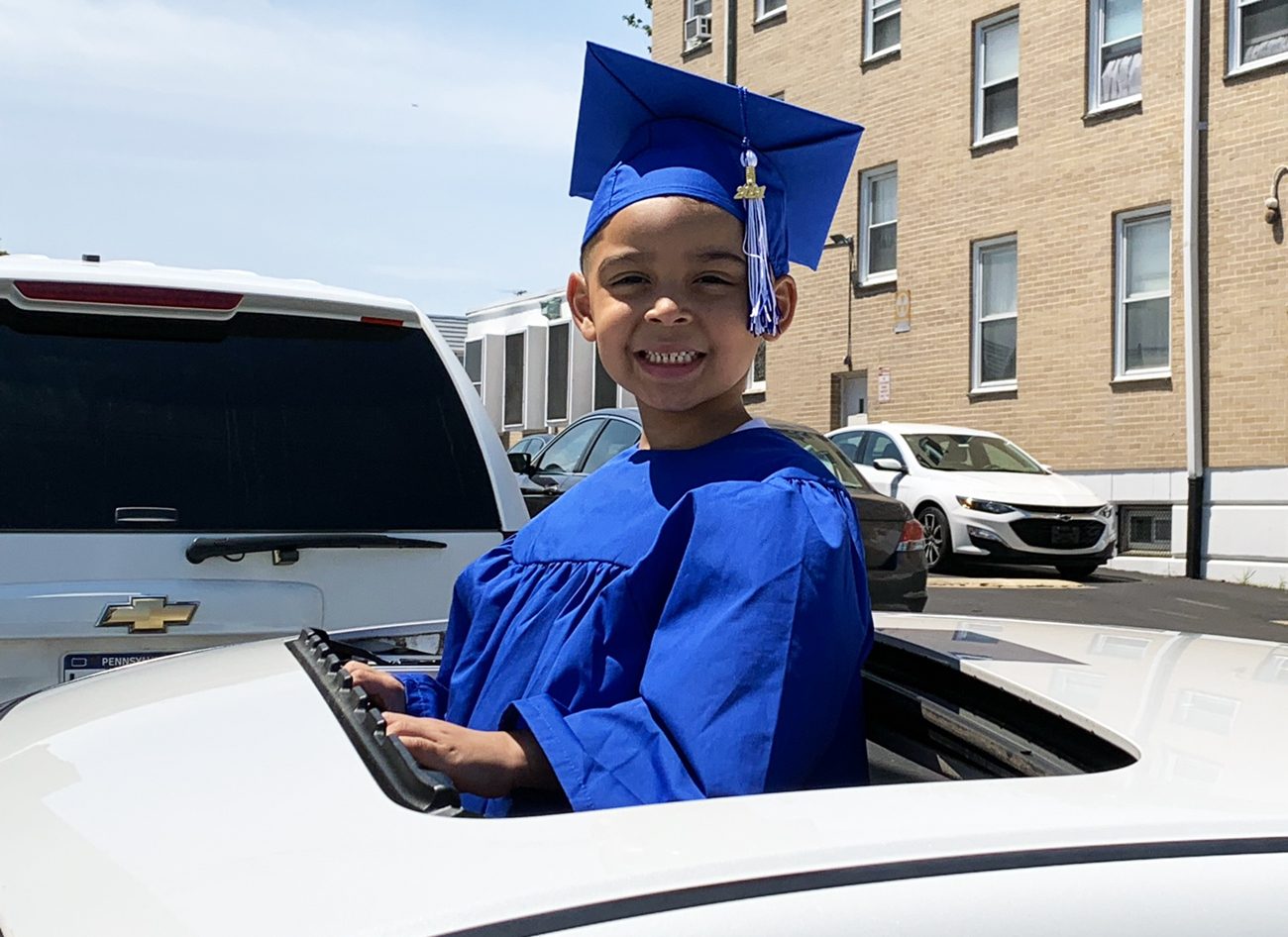 A graduate of the archdiocesan Casa del Carmen Preschool Academy in North Philadelphia waits to receive his diploma at a June 18 drive-through graduation hosted by nearby Holy Innocents Parish. (Gina Christian)

Students at an archdiocesan preschool donned their mortarboards for a lively drive-through graduation last week in the city’s Juniata Park neighborhood.

Dozens of cars lined up June 18 in the parking lot of Holy Innocents Parish, where teachers and staff from the Casa del Carmen Preschool Academy cheered 40 small scholars, many of whom smiled and waved through sunroofs during the procession.

The academy is one of the many programs offered through Casa del Carmen, a Catholic Social Services (CSS) site that has assisted the Latino population of the North Philadelphia since 1954.

With a typical waiting list of 30 children, the academy – which offers a bilingual, culturally responsive curriculum — has earned high marks with its funding and regulatory partners. The Pennsylvania Department of Education gave the school its highest rating of Keystone Stars 4 in recognition of Casa’s early education strategy and overall management.

The city-licensed academy receives funding for preschool tuition through the Philadelphia beverage tax, but not during the summer months. Catholic Charities Appeal funds help support the academy year-round.

Thanks to rigorous prevention protocols, the school was able to offer in-person instruction “all the time” this year amid the pandemic, said Casa del Carmen administrator Camille Crane.

With daily classes in science, math, reading and listening skills – along with art, play, nap and meal periods — the daily schedule gave children “some sort of normalcy,” she said.

“They couldn’t be in crowds, even among family members, but they could go to school,” she said. “And they did. They were happy because their lives were still somewhat normal despite it all.”

The kids “held up really well with all the restrictions,” Crane noted, describing students and their families as “resilient.” 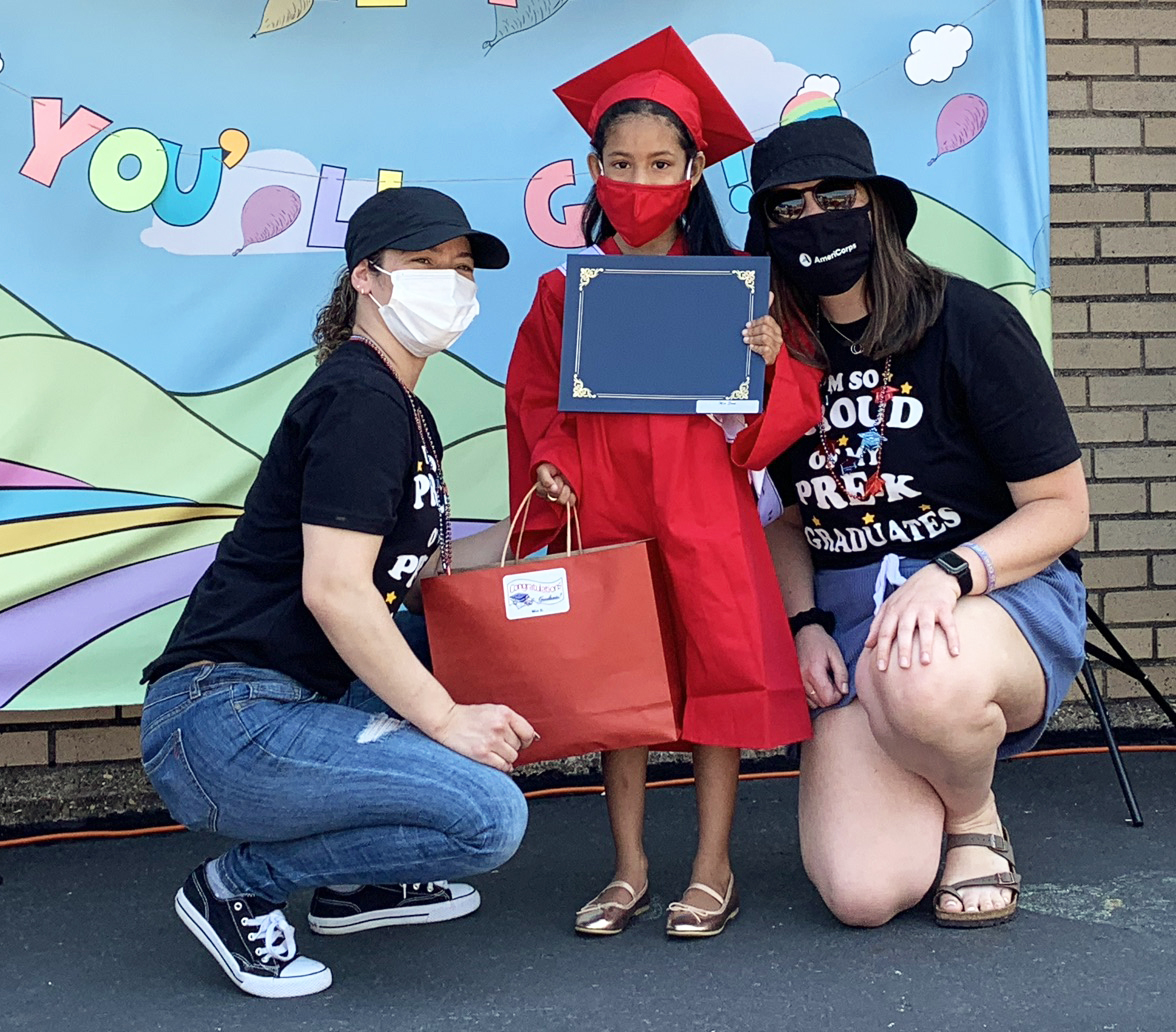 Academy director Shari Gold — a Chestnut Hill College graduate with 25 years of teaching experience – agreed, adding a second school year during COVID “was an absolute adventure,” one she and her team were determined to see through.

“We had 73 families that needed services here, and a full school enrollment,” said Gold. “We’re early childhood educators. We adapt.”

Sister of St. Joseph Diane Wolf, an academy aide and herself a retired educator, observed “a real change” in her students “from October through Easter.”

“They started to feel comfortable and at home,” she said. “They had their buddies, they knew what do to in their various centers and circles.”

With the kids relaxed and confident, their language skills improved, especially among those for whom English is a second language, she said.

“I saw such an increase in them talking to each other,” said Sister Diane. “It was really wonderful. Sometimes I just stood back and listened.”

At times, she admitted, the conversation was a bit above her head.

“Of course, all the little ones know the names of all the dinosaurs,” she said. “I was left out in the cold there.”

Bugs were also a successful addition to the syllabus, said Sister Diane.

“Just the connections they could make when they studied all the insects,” she said. “They could tell you why that was or wasn’t an insect; their categories were amazing. The teachers just poured out, and the children took it all in.”

At the same time, COVID did curtail informal but vital exchanges between parents and teachers during drop-offs and pick-ups, Sister Diane said. Interactions were limited to phone calls and emails.

Still, “kindergarten will tell the tale,” she said, noting she even felt “some of (the students) were ready for first grade.”

Brianna Cruz was thankful her son King “had the chance to learn in the (Casa) environment and to come to know his Puerto Rican roots and background.”

“What I like best is that they’re bilingual,” she said. “I wasn’t brought up speaking Spanish, so I’m glad he is learning.”

For her, the graduation was “bittersweet.”

“I’m feeling good, but he’s my firstborn, and he’s getting big,” said Cruz. “Now he’s off to greatness and good things.”

NEXT: Delco officials look to convert archdiocesan land into park