Abandoned at birth, woman’s boxes save babies: ‘I was made for this’ 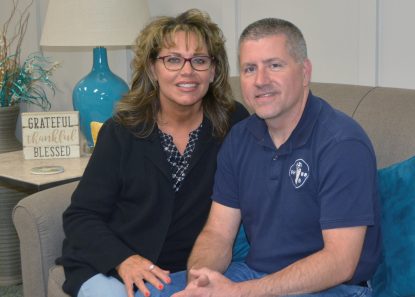 Monica and Joe Kelsey smile for a photo at Our Lady of Fatima Retreat House in Indianapolis April 30, 2021. Monica is founder and CEO of Indiana-based Safe Haven Baby Boxes. Joe is the organization’s chief operating officer and the mayor of their hometown, Woodburn, Ind. (CNS photo/Natalie Hoefer, The Criterion)

“It was never a question of if or when — I knew I was going to find her one day,” said Kelsey, 48, who is the founder and CEO of Indiana-based Safe Haven Baby Boxes.

And in 2010, she found herself with her husband, Joe, meeting with the woman whom she believed surrendered her for adoption through an abundance of love.

“At first I couldn’t understand why she was telling us this sad story,” Kelsey recalled. “Then I took a step back and realized she was talking about me and her.”

The story involved a 17-year-old young woman who was raped, beaten and left by the side of the road in October 1972. Six weeks later, she discovered she was pregnant.

Though abortion was still illegal, Kelsey’s birth mother sought one, but changed her mind at the last moment.

After the attacker was arrested and charged with rape and battery — Kelsey does not know if he was convicted — the ashamed teen stayed out of the public eye for the rest of her pregnancy. When she did give birth, the scared young mother left her baby daughter at a hospital in a small Ohio town.

“It was devastating,” Kelsey said. “I didn’t want to be that unwanted, unloved child that was whisked into this world by violence. I wanted to be the child I grew up thinking I was, which was loved so much that your birth mother gave you to two parents.”

“It was tough to swallow,” she told The Criterion, newspaper of the Archdiocese of Indianapolis. “It took me to a low point. I had to find my worth — that’s the best way to explain it.”

At the time, Kelsey worked as an ambulance medic, a skill she learned during her time as a firefighter with the U.S. Navy.

“I always felt like I wanted to help people,” she said. “Being a medic let me help people and became an avenue to help me find my worth.

“In the back of an ambulance, if I save somebody’s life they’re thanking me. … So, I buried myself on an ambulance for a long time every night, because that’s where I was seeing my worth the most. … I think that truly helped me to circle back to my faith and see that my worth was always there.”

Kelsey, who was raised a Christian, said she leaned heavily on Scripture to help her through the difficult time.

“You have to bury yourself in it to see where you fit in and look for your purpose,” she said. “You’re trying to figure out what something (in your life) means, then you come across Scripture that really stands out to you that is totally talking about your life.”

For Kelsey, that passage is Chapter 50, Verse 20, of the Book of Genesis where Joseph tells his traitorous brothers: “Even though you meant harm to me, God meant it for good, to achieve his present end, the survival of many people.”

Her effort became especially focused after her biological mother died in 2013. 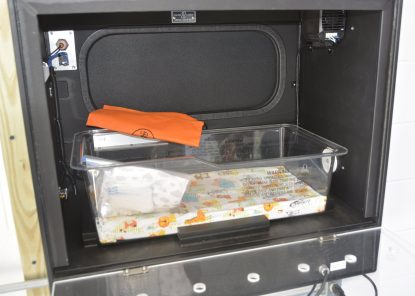 A Safe Haven Baby Box is seen at Brownsburg Fire Territory Station 131 in Brownsburg, Ind., April 30, 2021. The goal of these boxes is to prevent illegal abandonment of newborns by giving a mother in crisis a way to give up her baby, who is then placed with an adoptive family. The orange bag inside each baby box contains information for the mother. (CNS photo/Natalie Hoefer, The Criterion)

Kelsey knew she wanted to “save the lives of children, because my life was saved.” So she created a product, hotline and nonprofit organization called Safe Haven Baby Boxes.

The same year her biological mother died, Kelsey went to South Africa with her friend and chastity promoter, Pam Stenzel, on a tour to promote abstinence. It was there that she first saw a baby box and learned about its purpose.

She spent the next two years researching, planning and designing, all while working full time.

The organization’s first baby box was installed in 2016. For several years, Kelsey continued to work full time while running the organization, researching applicable laws, coordinating the aspects of a baby box installation and attending the opening and blessing ceremony.

It finally became too much. She retired from her job as a medic and now pours all of her time and energy into Safe Haven Baby Boxes.

Joe, her husband of 22 years, is the organization’s chief operating officer and also mayor of their hometown, Woodburn, in northern Indiana.

But his face beams when asked about Monica’s accomplishments.

“I am so proud of my wife, just so proud,” he said emphatically. “We’re changing lives in the entire country. I just can’t get over the fact.”

The organization’s first baby was saved in 2017.

“We keep in contact with a lot of the parents who adopt these babies,” Monica Kelsey said. “At our (fundraising) banquet last year, six of them brought their baby-box babies. It was such an honor to see them and to think that they were saved in our boxes. It keeps us passionate, seeing the fruits of our labor.”

Kelsey sees her work with Safe Haven Baby Boxes as a mission, a calling.

“I believe I was made for this,” she declared. “To be able to save the lives of children, because my life was saved.”

Monica Kelsey has written about her story in a new book, “Blessed to Have Been Abandoned: The Story of the Baby Box Lady,” available for purchase at shbb.org/shop. All proceeds benefit Safe Haven Baby Boxes. 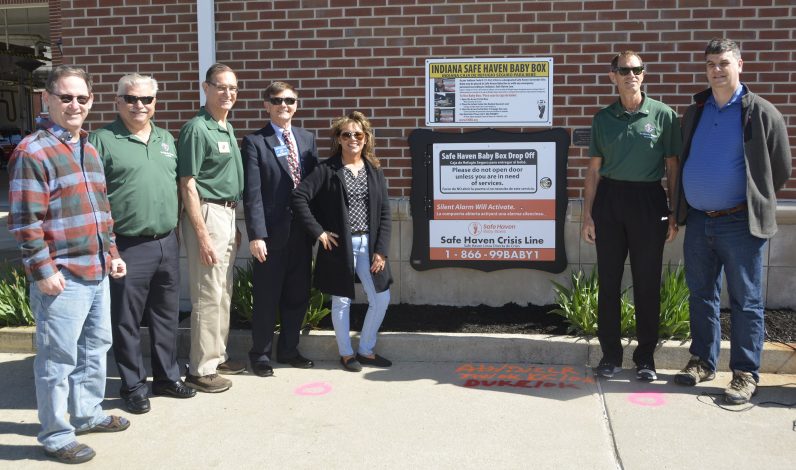 Monica Kelsey poses for a photo April 30, 2021, at Brownsburg Fire Territory Station 131 in Brownsburg, Ind., next to a Safe Haven Baby Box. Placement of the box was made possible with the help of the station’s firefighters and Knights of Columbus from the local council at St. Malachy Parish in Brownsburg and from the Knights’ state level organization. (CNS photo/Natalie Hoefer, The Criterion)

PREVIOUS: As one immigration policy falls, bishop calls for end to another

NEXT: Miami Catholic parish says 10 of its families still missing after building collapse