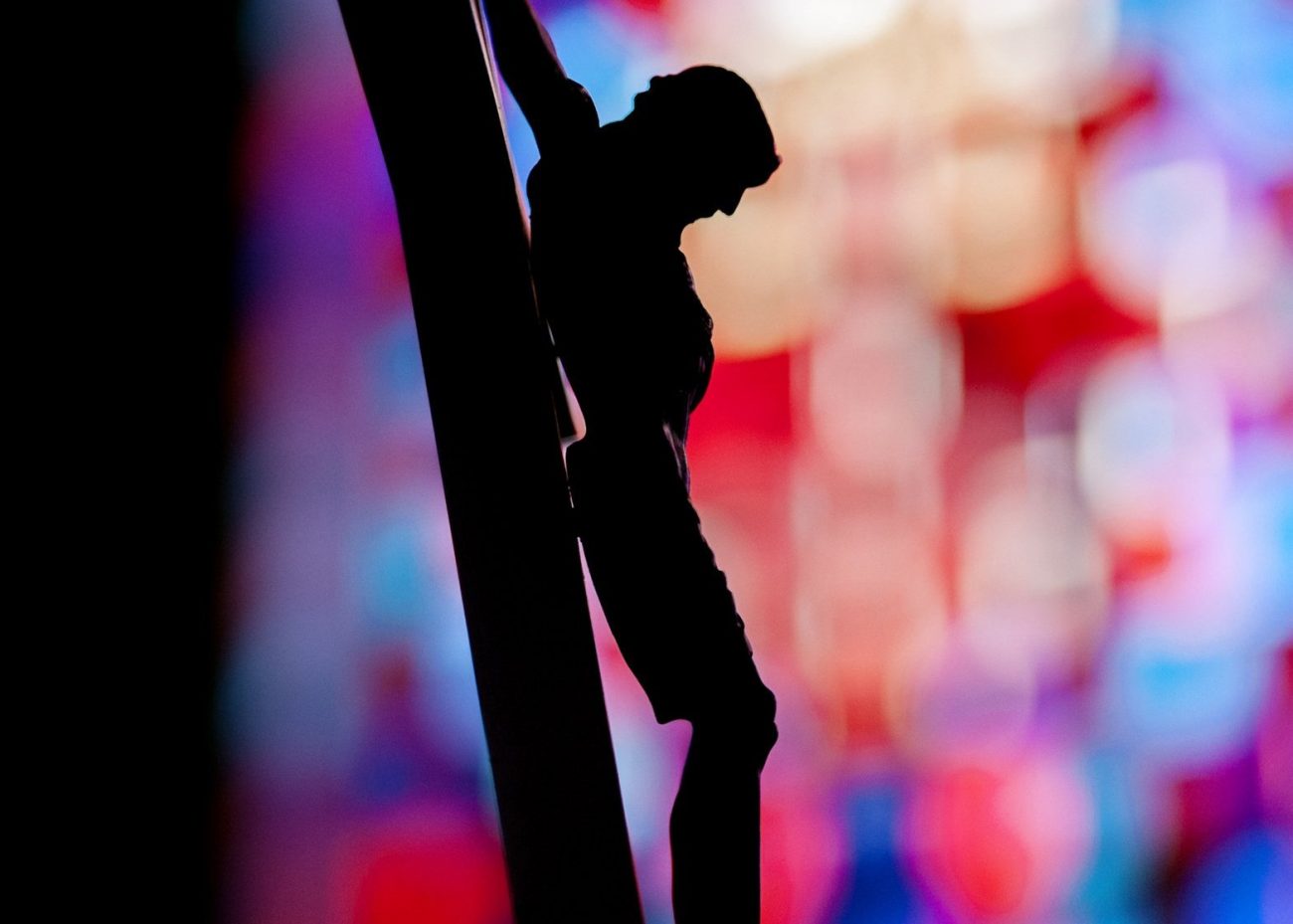 A crucifix is silhouetted against a stained-glass window in this illustration photo. A prayer vigil was held at the Shrine of St. Anne Catholic Church in Arvada, Colo., June 24, 2021, for slain Arvada Police Officer Gordon Beesley and bystander Johnny Hurley. Beesley, a 19-year veteran of the force, was shot June 21 by Ronald Troyke, 59, who was killed by police. Law enforcement officials said Troyke ambushed and targeted Beesley because he hated police. (CNS photo/Mike Crupi, Catholic Courier)

ARVADA, Colo. (CNS) — Arvada Police Officer Gordon Beesley, shot dead June 21 by a gunman who law enforcement officials said targeted him, was recalled during a Catholic church service as a man who brought a “smile with him everywhere” he went.

Arvada Deputy Police Chief Ed Brady referred to his smile during a prayer vigil June 24 at the Shrine of St. Anne Catholic Church, which is in Olde Town Arvada not too far from the library where Beesley was fatally shot.

Also remembered at the service was Johnny Hurley, who was killed during the shooting. News reports described him as a “good Samaritan” who ran out of the nearby Army Navy Surplus store when he heard gunfire nearby. He pulled out a concealed weapon and shot at the gunman five or six times, but was himself killed.

“We’d like to welcome you this evening as we remember Officer Beesley and John Hurley, who laid down their lives to provide for the safety of our community,” said Father Sean McGrath, pastor of the Shrine of St. Anne Parish told the congregation.

A photo of Beesley was on one side of the pulpit and one of Hurley was on the other side.

The Jefferson County, Colorado, coroner identified the suspected gunman as 59-year-old Ronald Troyke, who was shot by police. Arvada Police Chief Link Strate said Troyke had “expressed hatred of police officers” and had “targeted” and “ambushed” Beesley because he was a police officer.

Another vigil was held for Beesley at Peace Lutheran Church, which also is in Arvada.

A private funeral for him will take June 29 at Flatirons Community Church in Lafayette, Colorado, the same church where the funeral took place for Boulder Police Office Eric Talley, who was fatally shot in a mass shooting at a grocery store exactly three months to the day that Beesley was shot.

Beesley, a 19-year veteran on the force who leaves behind a wife and two young sons, was a resource officer at Oberon Middle School, but with school out, he was on patrol duty.

A Colorado Springs Gazette story said comments from some of the children posted on social media about Beesley were read during the service at St. Anne. One student said that “he was a really cool guy. I really, really, really liked Officer Beasley.”

The slain officer had a band called the Railbenders, who released a statement June 22: “We are utterly devastated by the loss of our brother Gordon Beesley. Gordon was a founding member of our band. … He was a tremendous talent and performer. More importantly, he was a great friend. He was a gentle giant. He was the nicest guy you could ever know. … He was truly a light in our city and now there is a heavy darkness felt in his absence.”

NEXT: Call for prayers for healing for Floyd family, community follows sentencing