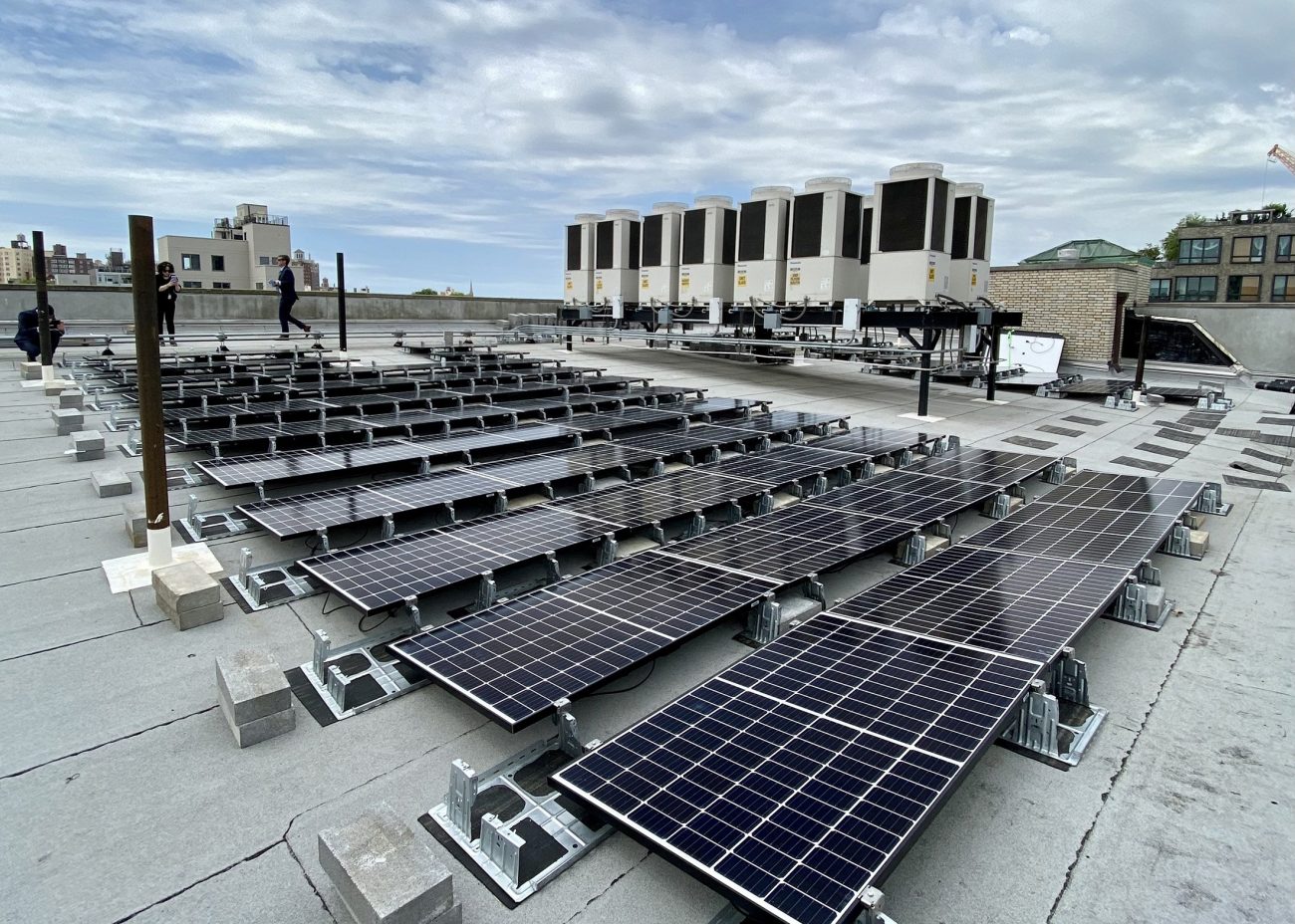 Solar panels in New York City are seen atop the Bishop Thomas V. Daily Residence in the Prospect Heights neighborhood of Brooklyn, N.Y., June 10, 2021. It is the first of four buildings receiving panels in a pilot project for the affordable housing units managed by Catholic Charities Progress of Peoples Development Corporation, the affordable housing developer of Catholic Charities Brooklyn and Queens. (CNS photo/Bill Miller, The Tablet)

The pope’s environmental concerns, including climate change, are set out in “Laudato Si’,” his 2015 encyclical and second such letter as pope.

In response, Catholic Charities of Brooklyn and Queens has formed the Laudato Si Corporation, a green-energy initiative to generate renewable energy with arrays of solar photovoltaic panels mounted on the rooftops of residential buildings across the Brooklyn Diocese.

Among them is the Bishop Thomas V. Daily Residence in the Brooklyn neighborhood of Prospect Heights, which will be the first building to receive solar panels, and was the site of the ribbon-cutting ceremony. Bishop Daily, who died in 2017, was Brooklyn’s bishop from 1990 until his retirement in 2003.

Before he cut the ribbon, Bishop DiMarzio recounted how the pope’s encyclical inspired the diocese to accelerate plans for sustainable energy capabilities on residential buildings operated by Catholic Charities of Brooklyn and Queens. Subsequently, the bishop in 2018 led an ecumenical delegation to the Vatican to present plans for the Laudato Si Corporation to Pope Francis.

“He gave us great encouragement,” Bishop DiMarzio told the audience. “We had Buddhist members and Catholic members, and so it was a great day. Now we see the fruits of that work.”

In “Laudato Si’,” Pope Francis wrote: “The urgent challenge to protect our common home includes a concern to bring the whole human family together to seek a sustainable and integral development, for we know that things can change.”

Bishop DiMarzio added, “We’re trying to make ourselves part and parcel of God’s creation, using all the things that God has given us, especially the sun, which produces so much energy.”

Catholic Charities in the Brooklyn Diocese is one of the largest faith-based providers of affordable housing in the U.S. It currently has 4,330 units of affordable homes in 44 buildings, with 240 more units under construction.

Besides the agency’s Daily residence, three of its other residential buildings are expected to receive similar solar panel installations by the end of this summer.

“And,” he added, “we certainly have a number of buildings that we’ve lined up to do a Phase 2.”

McManus noted, however, that some buildings managed by POP aren’t suitable to “support the investment.”

“Not all of our buildings have a large enough rooftop,” he explained. “So, we plan to do as much as possible where it makes financial sense.”

But McManus noted the solar panels are expected to pay for themselves as the electricity they produce gets “pumped back in the grid.”

“The other unique thing about this approach is with the panels, we will be selling energy back to Con Ed and Con Ed will be paying us for the energy we’re providing,” he said. “And we will be using the revenue generated through this to reinvest in those other buildings, where traditionally, you would have to go get a loan.”

McManus also described how the Laudato Si Corporation will participate in an “Inclusive Community Solar Agreement,” which will sell solar power to “subscribers” who prefer to get their electric utilities from local, renewable sources. Proceeds from these sales would help fund other initiatives of the corporation, he explained.

The law firm Nixon Peabody provided pro bono legal advice to form the new corporation. Bright Power, an energy and water management partner, is designing and installing solar arrays. Other assistance came from the Advanced Energy Research and Technology Center of the State University of New York at Stony Brook.

Bishop DiMarzio thanked all of them in his remarks. He concluded by saying Pope Francis’ call for action on climate change is appropriately urgent, adding that damage to the environment is not easily repaired.

“We cannot abuse creation,” the bishop said. “Pope Francis has said, God forgives all the time, people forgive some of the time, but nature never forgives. So we cannot destroy the nature that God has given to us.

“That’s why we take seriously our responsibility to preserve nature as God has given it to us. That’s why the Holy Father is taking this stand,” Bishop DiMarzio said.

“It’s not just an economic issue, but an issue for the whole world, and for everybody’s benefit, especially the poor people who seem to get the brunt of every ecological disaster,” the bishop concluded. “It is the people who are the poorest that really suffer the most.”

Miller is senior reporter at The Tablet, newspaper of the Diocese of Brooklyn. 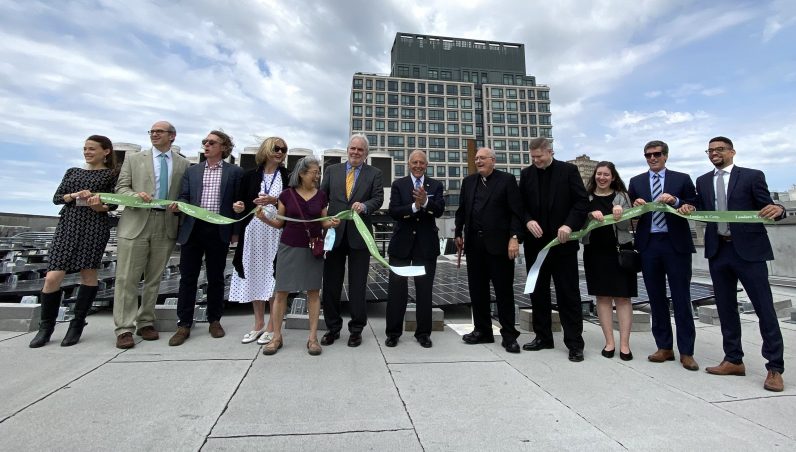 Bishop Nicholas DiMarzio of Brooklyn, N.Y., completes the honors at a solar panel ribbon-cutting ceremony for the new Laudato Si Corporation June 10, 2021. The green initiative has been launched to generate power with arrays of solar panels atop residential buildings operated by Catholic Charities of Brooklyn and Queens. With Bishop DiMarzio, who is near the center holding ceremonial scissors, are officials with the Catholic Charities Progress of Peoples Development Corporation and several organizations partnering with the diocese on the solar project. (CNS photo/Bill Miller, The Tablet)