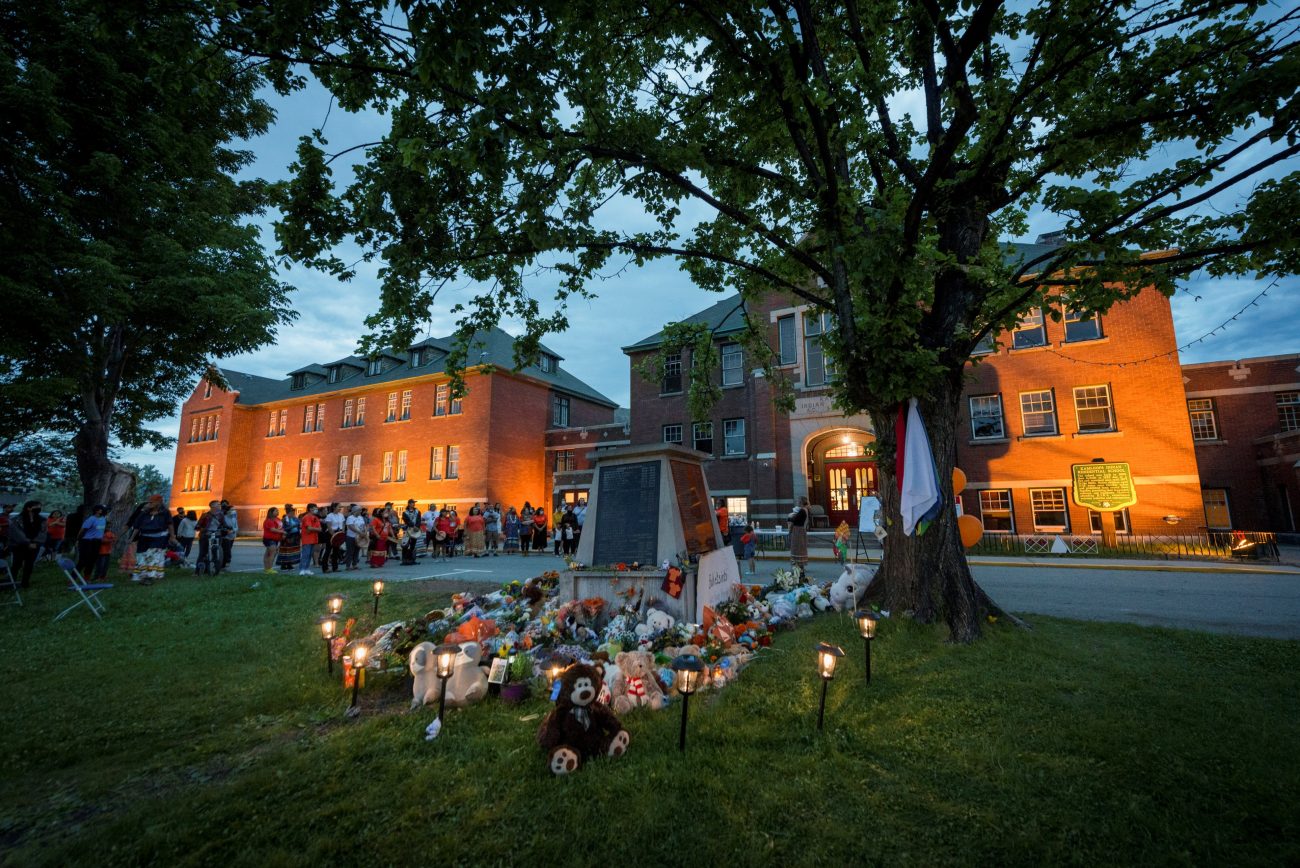 Kamloops residents and First Nations people gather to listen to drummers and singers at a memorial in front of the former Kamloops Indian Residential School in British Columbia May 31, 2021. Indigenous leaders and residential school survivors in Canada are calling on officials to conduct a thorough investigation of every former residential school in the country after the remains of more than 200 children were found on the grounds of the former Kamloops Indian Residential School. (CNS photo/Dennis Owen, Reuters)

VANCOUVER, British Columbia (CNS) — Archbishop J. Michael Miller of Vancouver said he was “filled with deep sadness” after learning of the discovery of the bodies of more than 200 children buried on the site of what was once Canada’s largest Indigenous residential school.

The Tk’emlúps te Secwépemc First Nation May 30 reported an “unthinkable loss” that was “never documented” at the former Kamloops Indian Residential School in Kamloops, British Columbia.

“We had a knowing in our community,” Chief Rosanne Casimir said of the discovery, which was verified with ground penetrating radar. Casimir said in a statement that some of the 215 children were as young as 3 years old.

In a statement, Archbishop Miller called the news “troubling.”

“The pain that such news causes reminds us of our ongoing need to bring light to every tragic situation that occurred in residential schools run by the church. The passage of time does not erase the suffering that touches the Indigenous communities affected, and we pledge to do whatever we can to heal that suffering,” he said.

Bishop Joseph Nguyen of Kamloops also expressed sadness over the discovery, saying “I humbly join so many who are heartbroken and horrified” by the news.

“On behalf of the Roman Catholic Diocese of Kamloops, I express my deepest sympathy to Chief Rosanne Casimir of the Tk’emlúps te Secwépemc Nation and to all who are mourning this tragedy and an unspeakable loss. No words of sorrow could adequately describe this horrific discovery,” he said, offering prayers on behalf of the diocese for the First Nations community.

Archbishop Richard Gagnon of Winnipeg, Manitoba, president of the Canadian Conference of Catholic Bishops, expressed sorrow for the loss of the children on behalf of the bishops in a statement May 31.

“The news of the recent discovery is shocking. It rekindles trauma in numerous communities across this land. Honoring the dignity of the lost little ones demands that the truth be brought to light,” he said.

“As we see ever more clearly the pain and suffering of the past, the Bishops of Canada pledge to continue walking side by side with Indigenous peoples in the present, seeking greater healing and reconciliation in the future,” the statement added.

Deacon Rennie Nahanee, former coordinator of the Vancouver Archdiocese’s First Nations Ministry Office and a member of the Squamish Nation, took part in National Truth and Reconciliation Commission hearings in Vancouver in 2011. He said he heard “sad stories” of how the remains of children were sent home from residential schools.

“I presumed then that the remains were returned home,” he said.

Several questions must be answered, Deacon Nahanee said, such as whether families were contacted upon the death of students, determining the government policy regarding deaths at the schools, and whether family names were recorded so remains can be returned to their communities.

The residential school opened in 1890 and was operated by Catholics and the Canadian federal government. It was the largest in Canada’s residential school system, with enrollment reaching a high of 500 students in the early 1950s.

The school was one of five residential schools run by religious orders in the historical geographic boundaries of the Vancouver Archdiocese. In 1945, with the establishment of the Diocese of Kamloops, the school fell under the boundaries of the new diocese.

The school eventually ceased running classes and in 1969 the federal government took over administration. At the time it was being used as a residential building for students at day schools. It closed in 1978.

The Missionary Oblates of Mary Immaculate provided administrators and teachers at the school.

“Through our ongoing reflection, and the work of the Truth and Reconciliation Commission, we are growing into a deepening awareness of the damage caused to indigenous peoples, the enduring harm caused by colonization, and the part our religious order played in it through the residential system,” Father Ken Thorson, provincial of OMI Lacombe Canada, the Oblate Canadian province, said May 30.

“This growing awareness leads us to an increased desire to listen deeply and learn from indigenous communities where Oblates continue to live and minister. The Oblates remain committed to humbly participating in ongoing efforts towards reconciliation and healing for our role in this painful part of our shared history,” Father Thorson said.

He also expressed “heartfelt sadness and sincere regret” for the deep pain caused to Indigenous people and his appreciation for the “sensitive and respectful way” the investigation is being carried out.

The Tk’emlúps te Secwépemc Nation said next steps include working with a coroner, reaching out to communities whose children may have attended the school, protecting the locations of the remains, and seeking records of the deaths.

NEXT: With world still in knots, pope turns to Mary with prayers