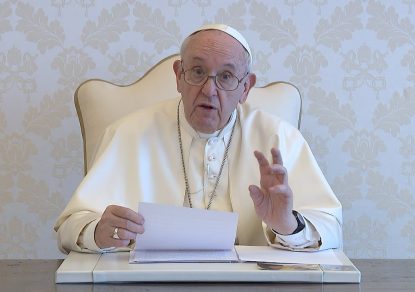 Pope Francis delivers a June 9, 2021, video message to participants of an online forum titled “Where are we with Amoris Laetitia?” dedicated to implementing proposals inspired by his 2016 exhortation of the same name. He said the church must learn to “listen actively to families, and at the same time to involve them as subjects of pastoral care.” (CNS screenshot/Vatican Media)

VATICAN CITY (CNS) — To truly reach out to families, the Catholic Church first must learn to listen to their concerns rather than doling out theoretical solutions to life’s harsh realities, Pope Francis said.

In a video message sent June 9 to participants of an online conference dedicated to his apostolic exhortation “Amoris Laetitia,” the pope said the church must “set aside any ‘merely theoretical message without connection to people’s real problems,’ as well as the idea that evangelization is reserved for a pastoral elite.”

“In the midst of the difficulties caused by the pandemic, which lacerate the life of the family and ‘its intimate communion of life and love,’ the family today is more than ever a sign of the times, and the church is invited above all to listen actively to families, and at the same time to involve them as subjects of pastoral care,” he said.

The June 9-12 forum, titled “Where are we with Amoris Laetitia?” is one of several events for “Amoris Laetitia Family Year,” commemorating the pope’s 2016 apostolic exhortation on family life.

Representatives of family ministry offices of bishops’ conferences, associations and international ecclesial movements were invited to the three-day virtual event, the dicastery said.

According to the dicastery’s website, the forum “will deal with marriage preparation, the training of accompanying persons, the education of children, conjugal spirituality, family missionary work and pastoral paths to accompany, discern and integrate fragilities.”

In his video message, the pope said the virtual event “represents an essential moment of dialogue” in which the church and the laity “can come together to listen to the concrete needs of families and to help each other in undertaking the processes necessary to renew the proclamation of the church.”

To bring God’s love to families, he explained, the church needs the help of families themselves and “their concrete experience of life and communion.”

“We need spouses alongside the pastors, to walk with other families, to help those who are weaker, to announce that, even in difficulties, Christ is present in the sacrament of marriage to give tenderness, patience and hope to all, in every situation of life,” the pope said.

Young Catholics, he added, also must “see with their own eyes the love of Christ alive and present in the love of spouses” who give witness through their lives that love is possible.

“Just as the spouses Aquila and Priscilla were valuable collaborators of St. Paul in his mission, so too today many married couples, and even entire families with children, can become valid witnesses to accompany other families, create community, and sow seeds of communion among the peoples receiving the first evangelization, contributing in a decisive way to the proclamation of the kerygma,” the pope said.

Much like the priesthood, marriage serves to “build up the people of God,” Pope Francis said, adding that families are the “domestic church, the place in which the sacramental presence of Christ acts between spouses and between parents and children.”

By concentrating on the formation of laypeople, especially married couples and families, the church can help them understand “the importance of their ecclesial commitment” to be a sign of Christ’s presence in the lives of others.

“We pastors must let ourselves be enlightened by the Spirit, so that this salvific proclamation may be realized by married couples who are often there, ready, but not called upon,” the pope said. “If, on the other hand, we call to them, we call them to work with us, if we give them space, they can make their contribution to the construction of the ecclesial fabric.”