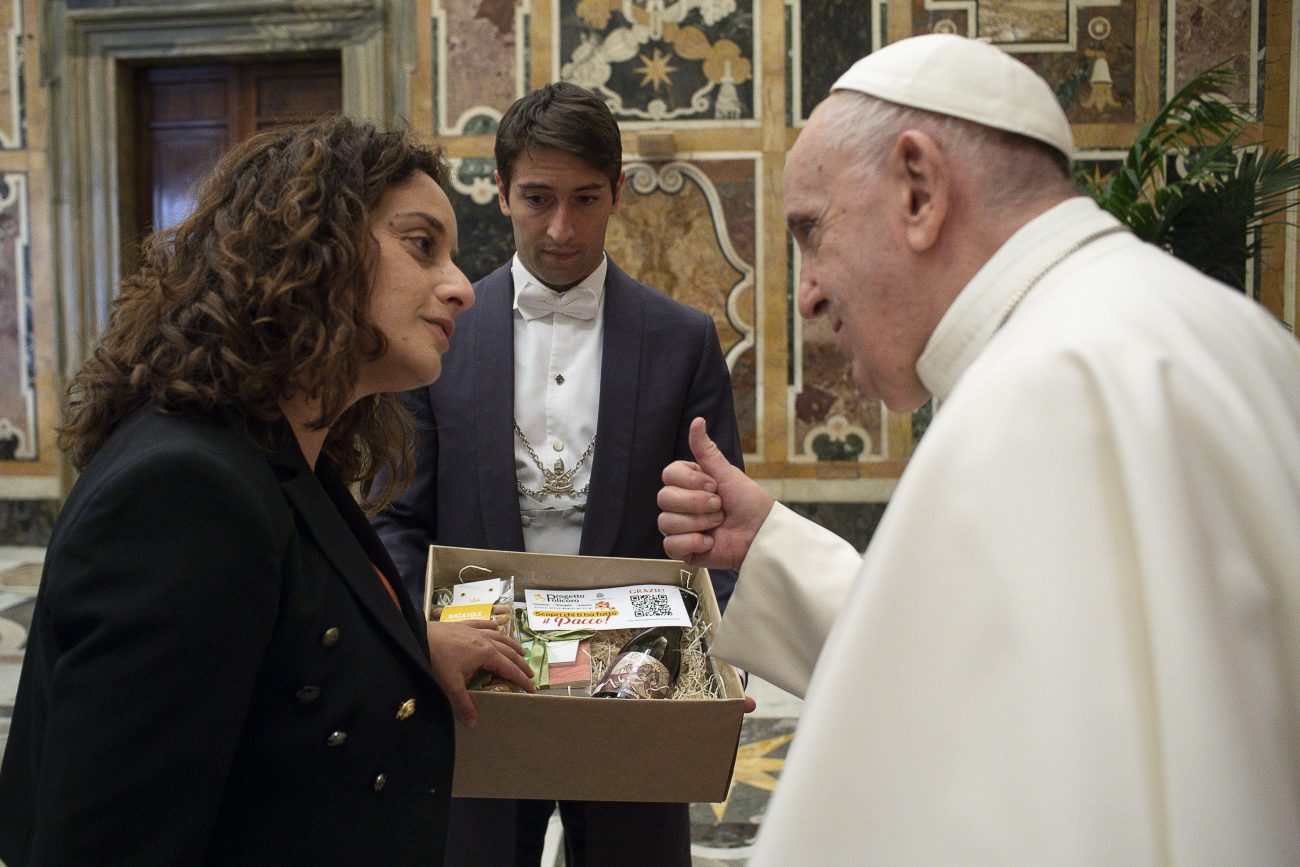 Pope Francis acccepts a gift during an audience with representatives of "Progetto Policoro," an employment initiative of the Italian bishops' conference, at the Vatican June 5, 2021. The initiative helps young people, primarily in southern Italy, find work. (CNS photo/Vatican Media)

“It is a problem of dignity,” the pope said June 5 during a meeting with young people and representatives commemorating the 25th anniversary of the “Progetto Policoro,” an initiative of the Italian bishops’ conference that helps young people find employment.

Founded in 1995 in the town of Policoro by Father Mario Operti, the initiative was meant to be a “concrete response to the problem of unemployment in Italy,” the project’s website says.

The goal of the “Progetto Policoro” is “to address the problem of youth unemployment by initiating training programs for a new work culture, by promoting and supporting youth entrepreneurship within the scope of subsidiarity, solidarity and legality according to the principles of the church’s social doctrine,” it said.

In his address, the pope said the initiative “has been and is a sign of hope, especially for so many territories in southern Italy that either lack work or exploit workers.”

“Sharing, fraternity, gratuitousness and sustainability are the pillars on which to base a different economy,” he said. “It is a dream that requires audacity because the bold are the ones who change the world and make it better. It is not voluntarism: it is faith, because true novelty always comes from the hands of God. This is what it means to animate.”

Young people also must show older generations what it means to “inhabit the world without trampling on it,” he continued.

While many young people might be tempted to move away to find better opportunities, the pope urged them to “love the areas where God has placed you and avoid the temptation to flee elsewhere.”

The pope also noted that the unemployment crisis has led to a demographic “winter” in which many young people, especially women, find themselves denied of employment opportunities if they are expecting a child.

“You have to react against this,” the pope said. “Let young people start to dream, to be parents, to have children. And for that, let them have jobs. Work is a bit of a guarantee of this future.”

Young people must be “passionate” about not only their own futures, but also in helping “other young people to take their lives into their own hands,” he said. “Do not be afraid to lend yourselves, even gratuitously, to uplift the lives of those who are discarded. Go to the peripheries to find the rejected.”

PREVIOUS: Indonesian archbishop says he was targeted twice by assassins

NEXT: Nun slain by three teenagers in satanic sacrifice beatified as martyr