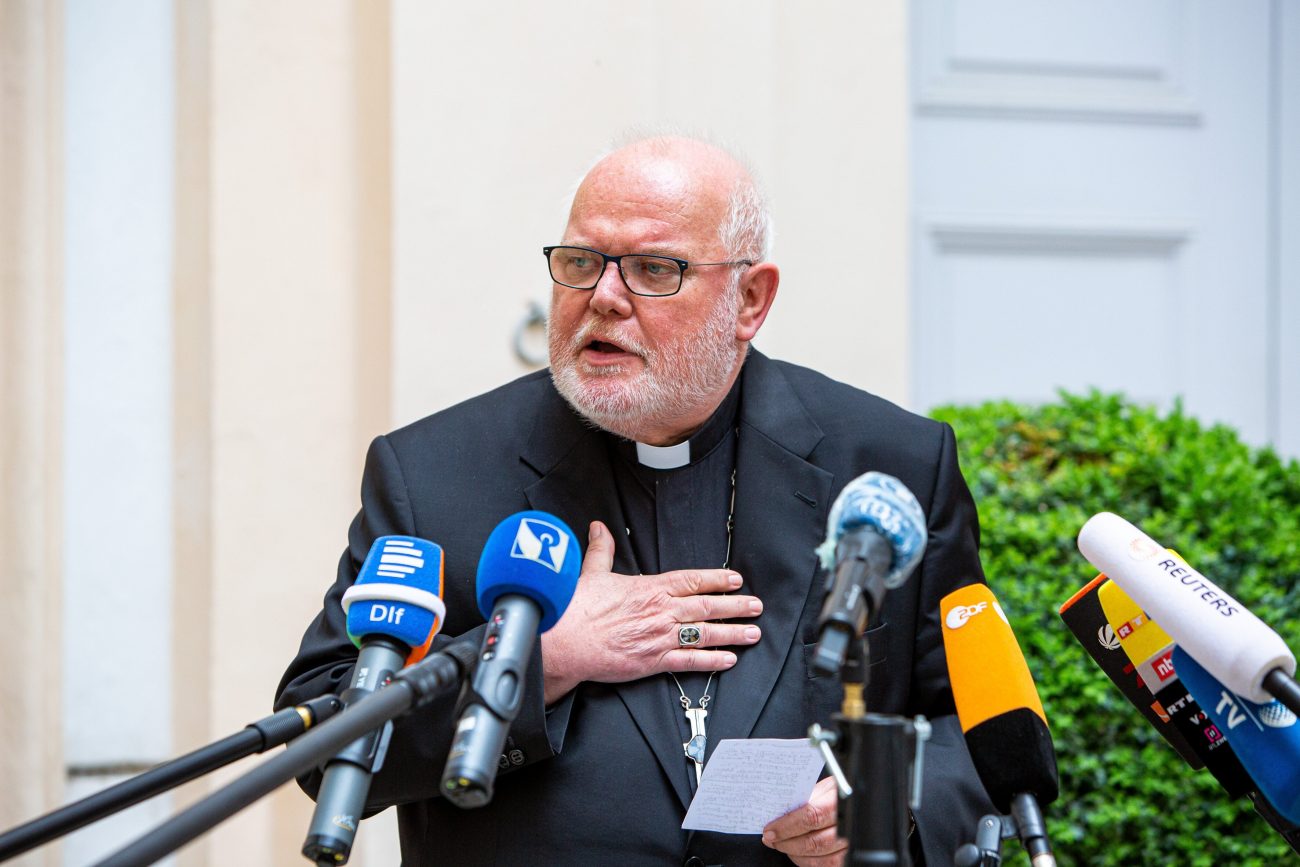 Cardinal Reinhard Marx of Munich and Freising, Germany, speaks during a press conference about his resignation offer, in Munich June 4, 2021. Cardinal Marx has submitted his resignation to Pope Francis, saying that bishops must begin to accept responsibility for the institutional failures of the church in handling the clerical sexual abuse crisis. The pope did not immediately accept the cardinal's resignation. (CNS photo/Robert Kiderle, KNA)

VATICAN CITY (CNS) — Agreeing with German Cardinal Reinhard Marx that Catholic leaders cannot adopt an “ostrich policy” in the face of the clerical sexual abuse crisis, Pope Francis still told the cardinal that he would not accept his resignation as head of the Archdiocese of Munich and Freising.

“If you are tempted to think that by confirming your mission and not accepting your resignation, this bishop of Rome — your brother who loves you — does not understand you, think of what Peter felt before the Lord when, in his own way, he presented him with his resignation: ‘Depart from me, for I am a sinner.’ And listen to the answer: ‘Shepherd my sheep,'” the pope wrote to Cardinal Marx.

The German cardinal, who is only 67, announced June 4 that he had submitted his resignation to Pope Francis because he believed bishops must begin to accept responsibility for the institutional failures of the church in handling the clerical sexual abuse crisis.

Pope Francis wrote a long reply to the cardinal June 10, and the Vatican press office published the letter the same day.

“I agree with you in describing as a catastrophe the sad history of sexual abuse and the way the church dealt with it until recently,” the pope wrote. “To realize this hypocrisy in our way of living the faith is a grace; it is a first step that we must take.”

“We must take on this history, both personally and communally,” Pope Francis said. “We cannot remain indifferent before this crime.”

Pope Francis said not everyone in the church agrees that the gravity of the crimes committed by members of the church and the lack of appropriate responses by church leaders should put all of them “in crisis.” 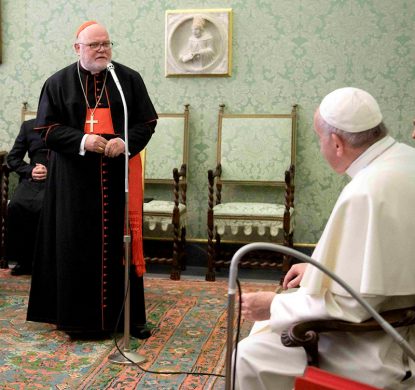 German Cardinal Reinhard Marx of Munich addresses Pope Francis during an audience with a delegation of Catholic and Evangelical journalists from Germany, in the Apostolic Palace at the Vatican April 4, 2019. (CNS photo/Vatican Media)

However, “it is the only way, because making ‘resolutions’ to change one’s life without ‘putting the meat on the grill’ leads to nothing,” the pope said, using a common Argentinian expression.

While what happened in the past “must be interpreted with the hermeneutics of the time in which they occurred,” the pope said, it “does not exempt us from taking charge and assuming them as the history of the ‘sin that besieges us.'”

Every bishop of the church, he said, should “ask himself, ‘What should I do in the face of this catastrophe?'”

Popes and Catholic bishops have apologized formally for “so many historical errors of the past” even when they were not personally involved, the pope said. “And we are being asked to adopt this same attitude today.”

But ensuring real change requires the leaders to “enter into crisis and let themselves be reformed by the Lord,” Pope Francis wrote. “Otherwise, we will be nothing more than ‘reform ideologues’ who do not put their own flesh at stake.”

“You say well in your letter that burying the past leads nowhere,” the pope told Cardinal Marx. “Silence, omissions, giving too much weight to the prestige of institutions only lead to personal and historical failure and to living with the burden of ‘having skeletons in the closet,’ as the saying goes.”

“It is urgent to ‘ventilate’ this reality” of abuse and failure to react promptly and appropriately, he said.

True reform, he said, will require every bishop to “let the Spirit lead us to the desert of desolation, to the cross and to the resurrection. It is the path of the Spirit that we must follow, and the starting point is humble confession: We have made a mistake; we have sinned.”

As a church, the pope said, “we must ask for the grace of shame.”

NEXT: Vatican project aims to make digital space a place of encounter