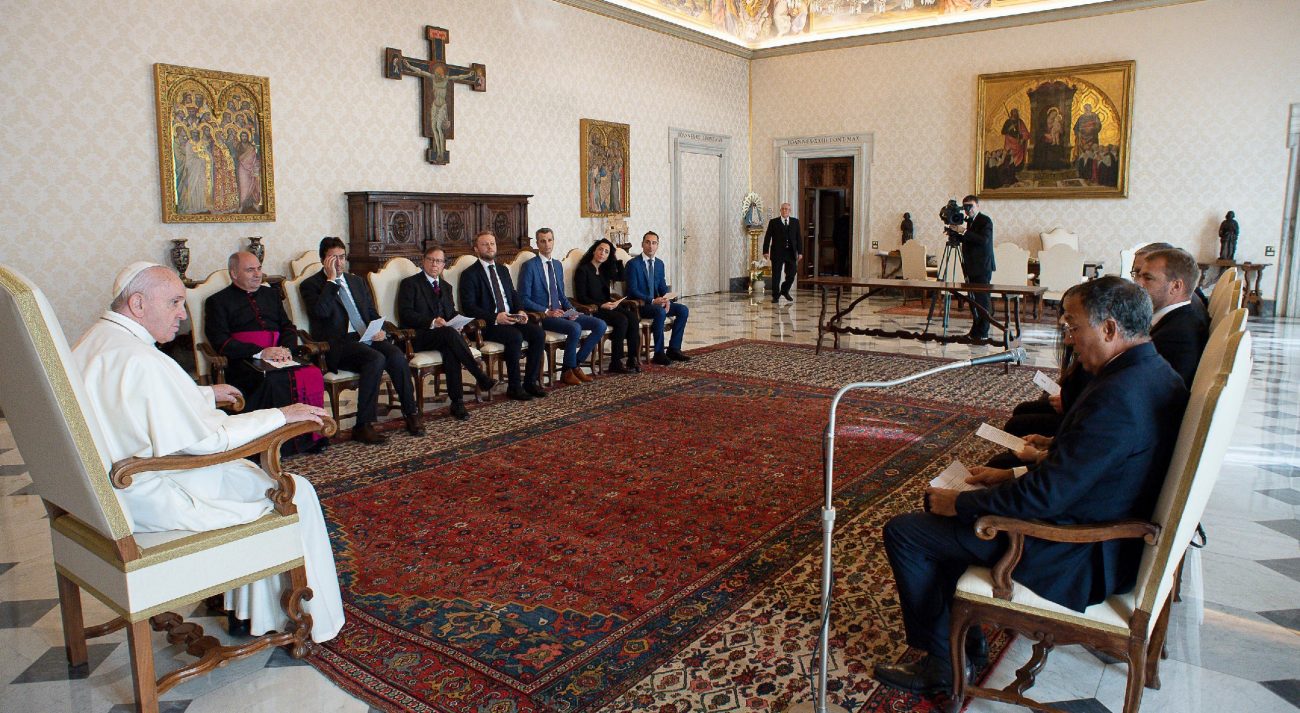 Pope Francis leads a meeting with experts from Moneyval, the European financial crime evaluators, at the Vatican in this Oct. 8, 2020, file photo. In a report published June 9, 2021, Moneyval said that while the Vatican has made progress in improving its financial oversight, internal cases involving "mid-level and senior" officials have raised "a red flag for potential abuse." (CNS photo/Vatican Media)

VATICAN CITY (CNS) — Moneyval, the European financial watchdog committee, said that while the Vatican has made progress in combatting financial crimes, its investigations into potential crimes committed by senior officials needs more fine-tuning.

The group, also known as the Council of Europe’s Committee of Experts on the Evaluation of Anti-Money Laundering Measures and the Financing of Terrorism, released its assessment of the Vatican’s compliance with financial regulation standards June 9.

The 275-page report was published after experts from Moneyval conducted a two-week onsite inspection of the Vatican in October.

In the report, Moneyval said control measures enacted to prevent financial crimes such as money laundering and terrorism financing “have significantly improved in recent years” and that the Vatican has a “sound understanding” of determining risks.

However, it also noted that “cases which have received wide coverage in the media have also raised a red flag for potential abuse of the (Holy See/Vatican City State) system by mid-level and senior figures within the jurisdiction — insiders — for personal or other benefits.”

Moneyval recommended that the Vatican focus on spotting potential threats, “including those presented through abuse of the system by insiders.”

Vatican officials told Moneyval investigators “that they consider the risk of abuse of office for personal or other benefits presented by insiders and related money laundering to be low,” the report said. “However, the assessment team disagrees with this conclusion and is of the view that risks presented by insiders are important.”

The most recent case involving a Vatican senior official was that of Cardinal Angelo Becciu, the former prefect of the Congregation for Saints’ Causes, who was forced to resign in September amid an investigation into suspected financial malfeasance.

The cardinal told journalists Sept. 25 that Pope Francis told him he was being investigated for embezzling an estimated 100,000 euros ($116,361) of Vatican funds and redirecting them to Spes, a Caritas organization run by his brother, Tonino Becciu, in his home Diocese of Ozieri, Sardinia.

No formal charges have been filed against Cardinal Becciu, who has denied the allegations. He also has filed lawsuits against several news outlets, accusing them of defamation and claiming that the reports ruined his reputation.

The cardinal’s name also turned up in relation to a questionable property development deal in London’s Chelsea district, a multimillion-dollar deal Vatican authorities began investigating in 2019.

Although the Vatican had not formally charged anyone as of June 9, the Moneyval report stated that “suspects are expected to be brought to trial by summer 2021” on charges that potentially would include “embezzlement, misappropriation, fraud, money laundering and abuse of office.”

The report also suggested the Vatican should “enhance” its use of financial intelligence in its criminal investigations and that it “recruit more prosecutors with practical experience of prosecuting financial crime in other jurisdictions.”

The Vatican’s prosecution of financial crimes has been “modest: two convictions for self-laundering — one in 2018 and one in 2019,” the report said, adding that even then, the punishment doled out was “not proportionate and dissuasive.”

In an interview with Vatican News published shortly after Moneyval released its report, Carmelo Barbagallo, president of the Vatican Financial Information Authority — known by the Italian acronym AIF — said he was pleased overall with the committee’s assessment which is a testament to “what has been built up over the years, the fruit of great teamwork.”

“This is normal because the ultimate goal of these controls is to improve the ability to prevent and combat money laundering and terrorist financing. It is for this reason that the ‘recommended actions’ are numerous, even in cases where, as in the case of the Vatican jurisdiction, a particularly positive judgment has been made,” he explained.

The president of AIF also noted the report’s acknowledgement that “since 2014, there have been many actions that demonstrate the attention of the Vatican jurisdiction” on potential financial abuses by Vatican personnel.

“The recommendations expressed by the Moneyval report with regard to the Vatican jurisdiction are an encouragement to do even better, to always keep the quality of the human resources high and to strengthen the activities of all the authorities involved in the fight against money laundering and terrorism financing,” he said.