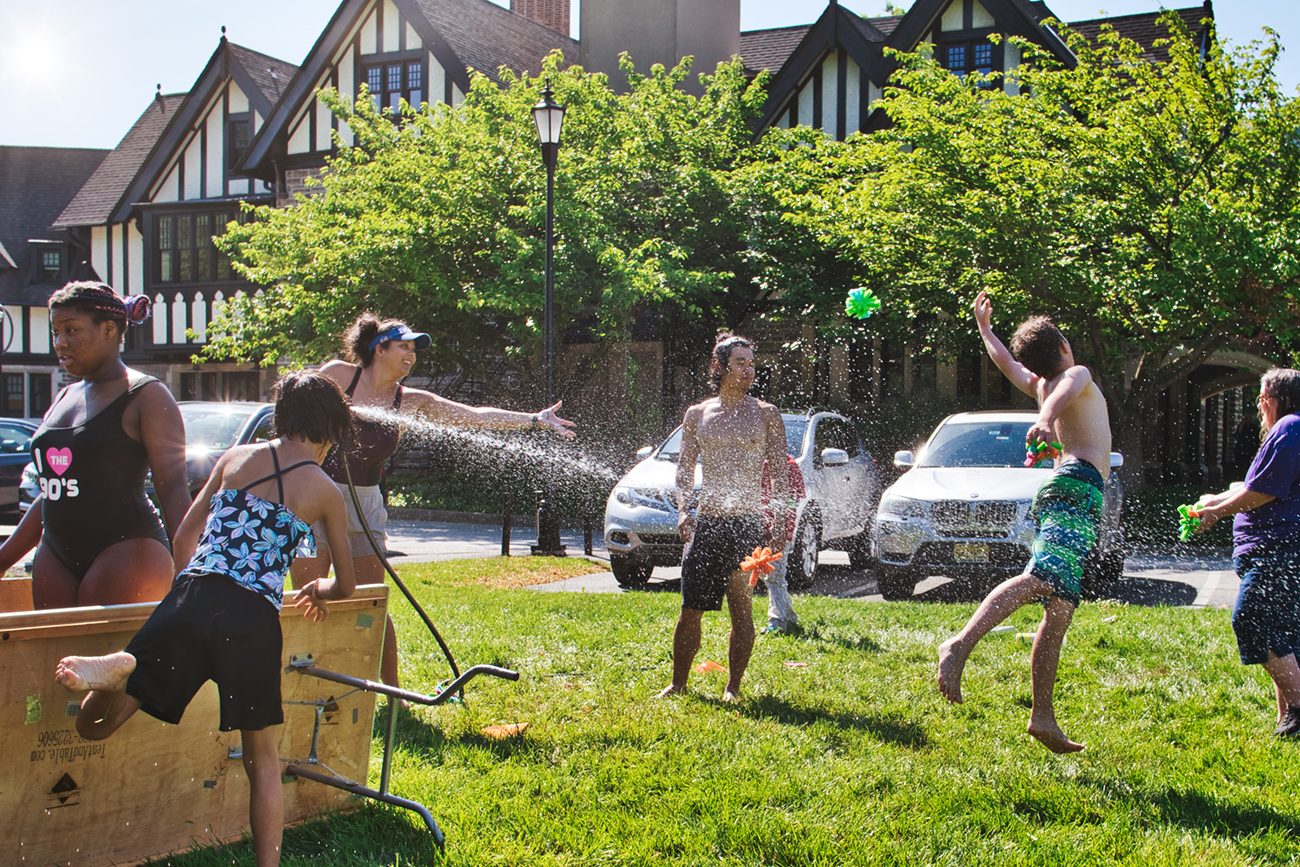 Participants at Camp Overbrook: In Sign enjoy some water fun in the sun during a recent session at the late June-early July day camp, which is sponsored by the archdiocesan Deaf Apostolate and hosted by Saint Joseph's University. (Photo courtesy of Sister Kathleen Schipani, I.H.M.)

An annual archdiocesan summer camp has just wrapped up two weeks of fun, faith formation and sign language fluency for children and teens who are deaf or hard of hearing.

From June 21 through July 2, Camp Overbrook: In Sign brought 46 participants to the Maguire Campus at St. Joseph’s University for full days of arts, crafts, games, prayer and presentations, all conducted in American Sign Language (ASL).

Sponsored by the Philadelphia Archdiocese’s Deaf Apostolate, the camp (previously held at St. Charles Borromeo Seminary in Wynnewood) has been an area tradition for close to three decades, with the 2021 session made possible by generous support from the Maguire Foundation, the Connelly Foundation, the Catholic Foundation of Greater Philadelphia and the Child Development Foundation.

After months of pandemic restrictions, this season’s campers enjoyed the return to in-person activities, thanks to a fully vaccinated staff, recently relaxed COVID guidelines and a large outdoor tent courtesy of the Maguire Foundation’s James J. Maguire, a Saint Joseph’s alumnus whose father was partially deaf.

Open to children of all religions, the camp focuses on Bible stories to encourage faith development and virtue-based learning. Given the events of the past year, the 2021 theme explored strategies for “becoming peacemakers and problem-solvers,” said Immaculate Heart of Mary Sister Kathleen Schipani, director of the Deaf Apostolate and the Office for Persons with Disabilities.

“It just seemed appropriate this year in particular,” said Sister Kathleen, who launched the camp – the only one of its kind in the region — in 1994.

In particular, the sessions provide a much-needed chance for campers to “experience Catholic community where they’re engaged with other people of faith, while using their language,” she said.

That solidarity and ease of communication can be a welcome change of pace for many of the children, Sister Kathleen added.

Some camp participants are enrolled in “fully signing environments” such as the Pennsylvania School for the Deaf, she said, but “others are in county programs where they might be the only deaf child in their school.”

Having “10 straight days of Bible study” is also “really impactful,” said Sister Kathleen, who developed an app to enable families to learn religious terms, devotions and prayers in ASL.

Archbishop Nelson Pérez visited as the second week of sessions opened, sitting in on activities and posing for pictures with smiling campers. 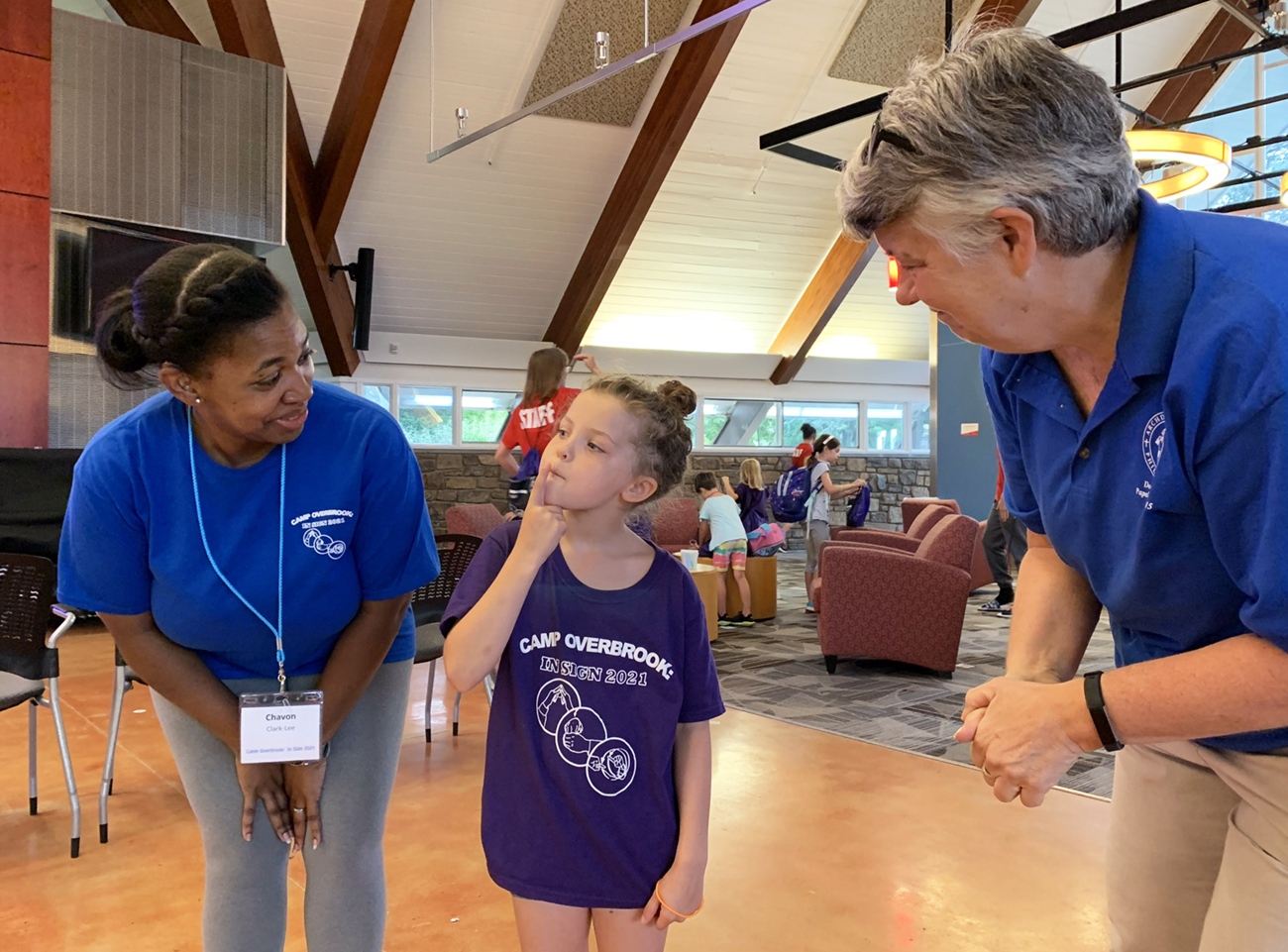 The camp’s array of daily speakers, all of whom are deaf, show the children the range of career possibilities open to them, she said.

On June 28, campers met Ron Popowski, a supervisory fish and wildlife biologist from the New Jersey office of the U.S. Fish and Wildlife Service, and a longtime specialist in conserving at-risk and endangered species. The week prior, epidemiologist Lorne Farovitch and DJ Nico DiMarco shared their professional insights with the kids.

Many of the presenters, as well as the camp staff, are graduates of the Washington, D.C.-based Gallaudet University for the deaf and hard of hearing – including art instructor Melissa Estes, who will return to her alma mater in the fall for a master’s degree in deaf education.

Amid a lesson on designing a keepsake book from a brown paper lunch bag, Estes – who works in a variety of media, including digital and fabric — said her goal was for campers “to keep using their creativity.”

Chavon Clark-Lee, who began attending the camp at age seven, did just that, eventually earning her bachelor’s degree in drama education at Gallaudet. Throughout high school and college, she performed in various productions. 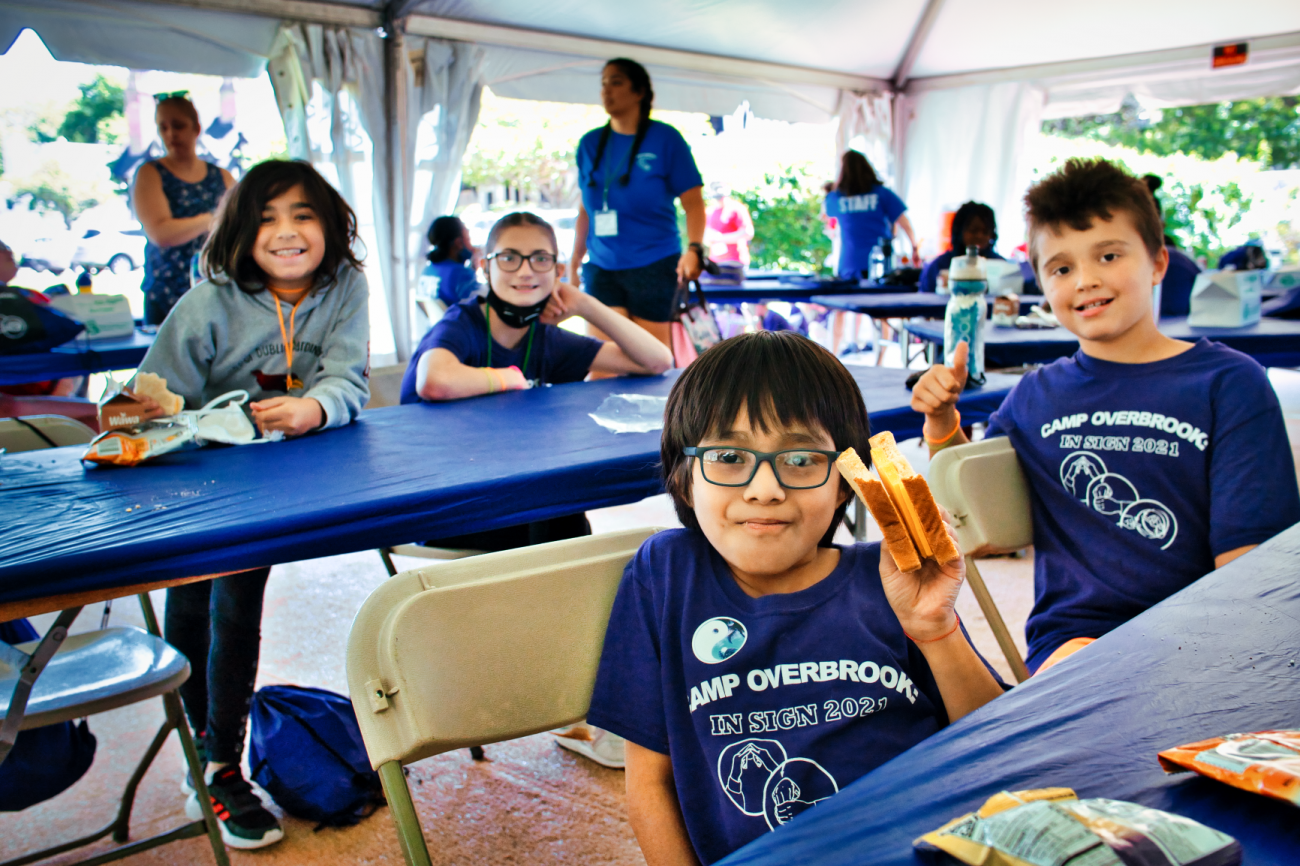 Kids at Camp Overbrook: In Sign, an annual summer camp sponsored by the archdiocesan Deaf Apostolate, enjoy lunch during one of the camp’s weekday sessions, which took place this year from June 21 to July 2 at Saint Joseph’s University. (Photo courtesy of Sister Kathleen Schipani, I.H.M.)

Now a full-time mother, Clark-Lee is a counselor at the annual camp, which she sees as a resource for “communication and connection.”

“We feel like we belong,” she said, speaking with Sister Kathleen as an ASL interpreter.

Awareness of the deaf community has risen over the years, she added.

Some 5.9% of U.S. adults experience deafness or serious difficulty hearing, according to the Centers for Disease Control, and in January, the White House announced that its regular press briefings would include an ASL interpreter as a standard practice.

Along with ASL immersion, faith formation and friendship, the camp has another – and equally important – goal: fun.

Jocelyn listed “balloons, art and running through the sprinkler” as her preferred camp offerings, and 15-year-old Roxi agreed that the water activities were also to her liking.

Fellow 15-year-old Josh Middleton, a hearing camp volunteer fluent in ASL, said he unexpectedly found himself the “main target” of a zealous team sport at the camp.

“I was assaulted with sponges yesterday,” said Middleton, noting that one of his quirkier tasks as a volunteer was “pumping up an inflatable cactus” for further revelries.

Clark-Lee said her favorite part of camp was simply “having fun with the kids, when the kids are enjoying themselves.” 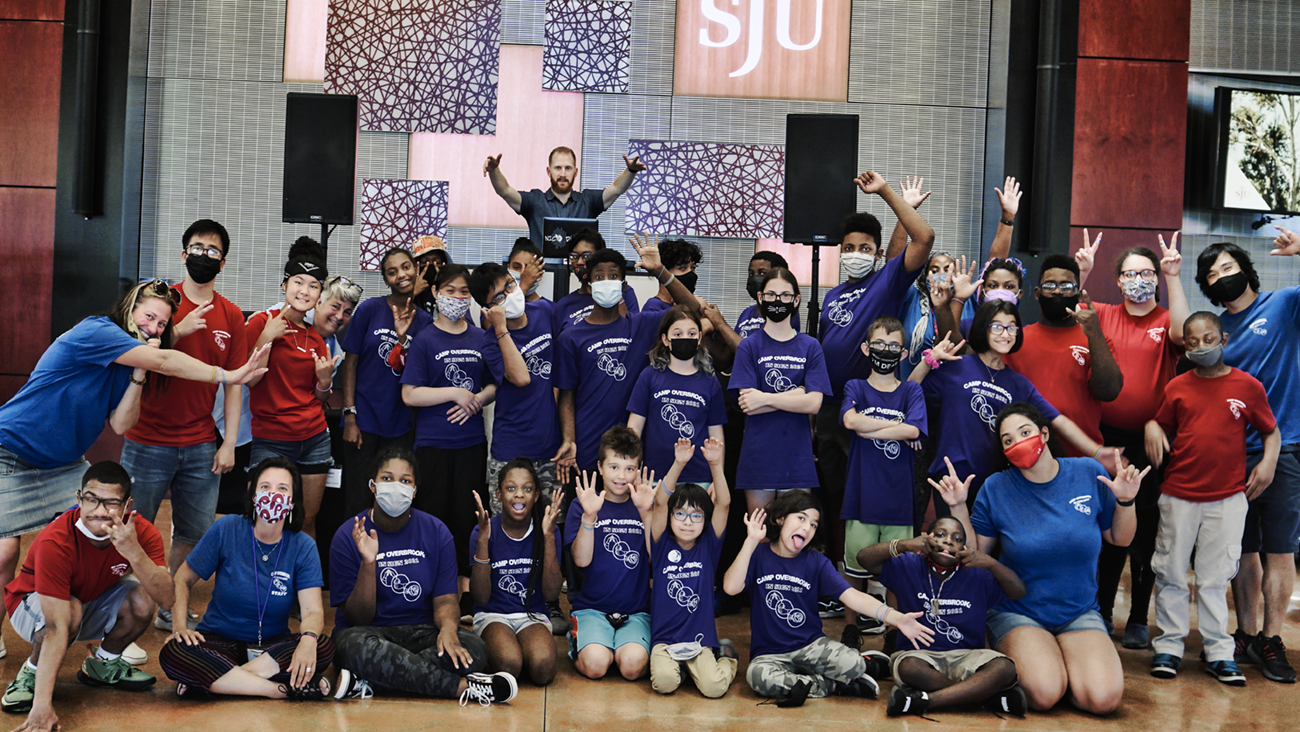 Kids and staff at Camp Overbrook: In Sign gather with deaf DJ Nico DiMarco (top center) during a June 24 session at the annual summer day camp, which is sponsored by the archdiocesan Deaf Apostolate and hosted by Saint Joseph’s University. (Photo courtesy of Sister Kathleen Schipani, I.H.M.)

NEXT: Down on the farm, they’re raising crops and lifting spirits