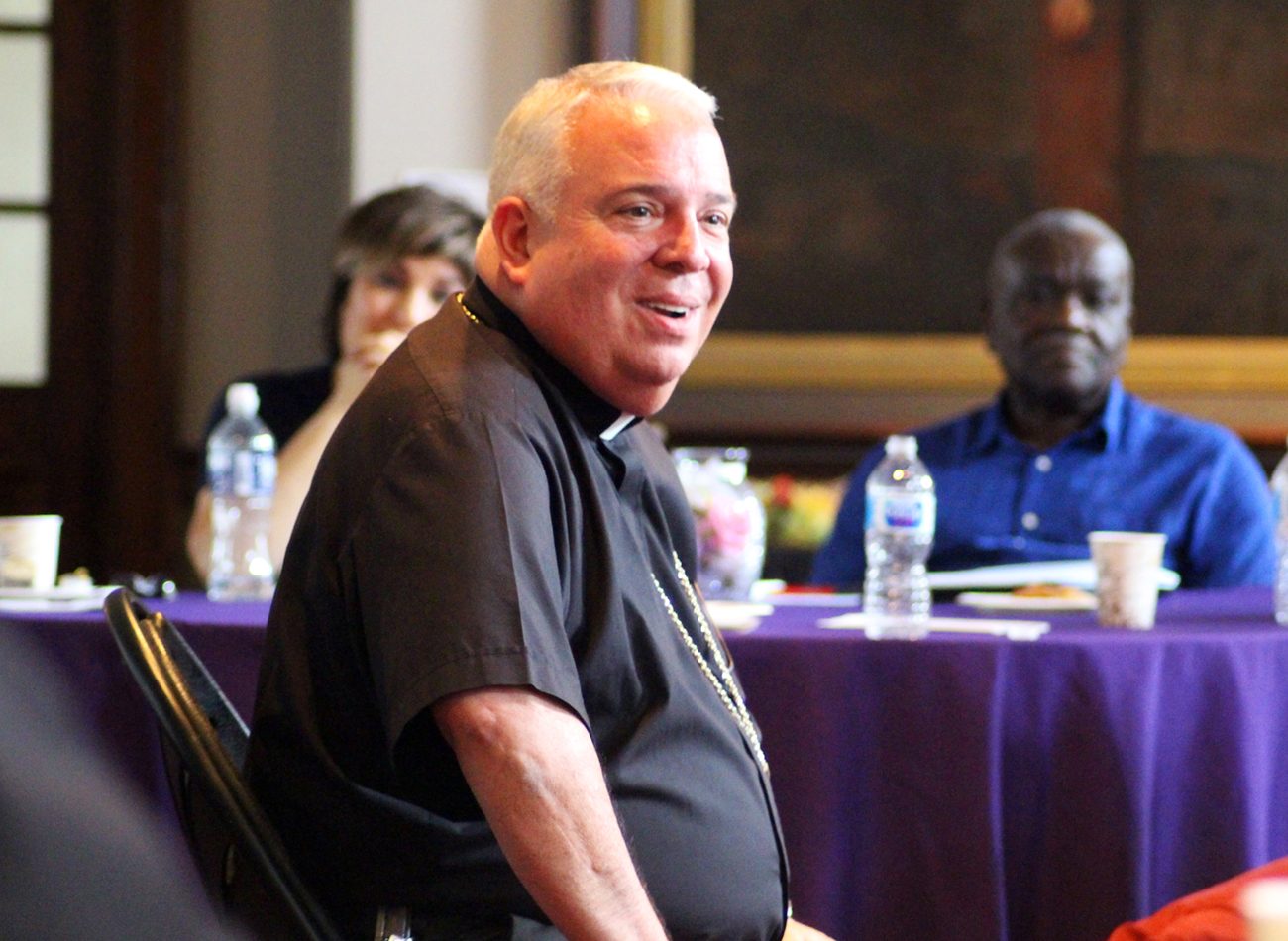 The archdiocesan Commission on Racial Healing is mapping the road to unity through the “step-by-step” creation of “encounter and dialogue,” said Archbishop Nelson Pérez.

The archbishop met with several members of the recently formed group during its June 26 retreat at St. Charles Borromeo Seminary in Wynnewood. The session marked the commission’s first in-person gathering after months of online meetings due to COVID restrictions.

Auxiliary Bishop John McIntyre, whom the archbishop had tasked with forming the commission in January, celebrated an opening Mass for the occasion – a fitting and fundamental start to both the retreat and the overall work of the commission, said member and presenter Father Stephen Thorne.

“That is the beginning of racial healing: the Eucharist,” said Father Thorne, a longtime pastor in predominantly Black Catholic parishes and a specialist in urban education.

Archbishop Pérez joined the retreat immediately after celebrating an annual liturgy in honor of Venerable Augustus Tolton, the first recognized African-American priest. Born into slavery, Tolton and his family escaped to Illinois, only to face further exclusion at the hands of fellow Catholics. Having discerned a call to the priesthood, he traveled to Rome for his formation, since no U.S. seminary would accept him due to the color of his skin.

“Learn from Father Tolton,” said the archbishop. “In the midst of great rejection and pain, he remained steadfast in the love that was in his heart.”

The church itself “actually has a lot of experience” in confronting “racial and cultural tension,” he said. “Go read the first few chapters of Acts of the Apostles.”

Early divisions among Jewish and Hellenistic believers in Christ, such as those described in Acts 6:1-7, demonstrate “what we’re going through today was talked about then,” said the archbishop.

He noted the first council of the church – that of Jerusalem, convened around the year A.D. 50  – “was actually (about) … diversity, racial tension and theological issues.”

Recent disagreements among U.S. bishops, which have received significant media attention, are no surprise, he added.

The church has always experienced internal conflicts “because it (consists) of human beings,” said Archbishop Pérez, advising commission members to “go and read” how proponents of the fourth-century Arian heresy – which denied the divinity of Christ – “argued (against) the church on trying to figure out who Jesus was.”

At the same time, he said, the church can show society how to overcome discord by promoting dialogue and encounter. The commission itself is meant to serve as an example of that process.

“If you can’t do it among yourselves … and reflect on your own stories, and if you can’t model it for us and for the rest of the church, then don’t expect a lot of great things,” said the archbishop. “Because what we’re doing here today is exactly the foundation of what needs to happen.”

The commission members themselves, drawn from Black, Latino, White and Asian communities, “live the reality of race,” he said.

However, he stressed that the group must also “figure out … who’s not at the table” but “needs to be called” to collaborate with its mission.

Rather than developing “programs and strategic plans,” the commission must focus on sparking deep transformation, said the archbishop.

“I’m asking you the change the culture of the church in Philadelphia,” he said.

The commission’s work will be ongoing over the coming years, said Archbishop Pérez – just as the evil of racism itself has been persistent and perennial.

Referencing widespread protests against racial injustice over the past several months, he stressed the formation of the commission “was not about last summer.”

“(Racism) has been around” for centuries, he said. “Last summer was just one more page of a long book.”

He pointed to commission member Gerald Davis’s numerous experiences of racism – some life-threatening – during his career as a Marine and a corporate executive.

While commission members “are being called to reflect on racial hurt,” said the archbishop, “you don’t deal with hurt by focusing on hurt … (but) by opening up for healing.”

As part of that task, he urged members to “allow themselves to be guided and inspired” by the holy Spirit.

Commission member James Andrews, director of the archdiocesan Office for Black Catholics, said he “can see good things are going to happen” as a result of the new effort.

“It’s going to take time, but I can see that we’re beginning to take the first few steps,” he said.

Simply bringing faithful from diverse backgrounds into the same room is a start, said Father Thorne.

“Just to have people say, ‘I didn’t know you were baptized at the same parish I was,’ or ‘We grew up in the same neighborhood, but I never knew you’ – those kind of connections are a model of how the church helps us realize we have more in common than we think,” he said. “And the more we do that, the more we’re going to realize this is one big family.” 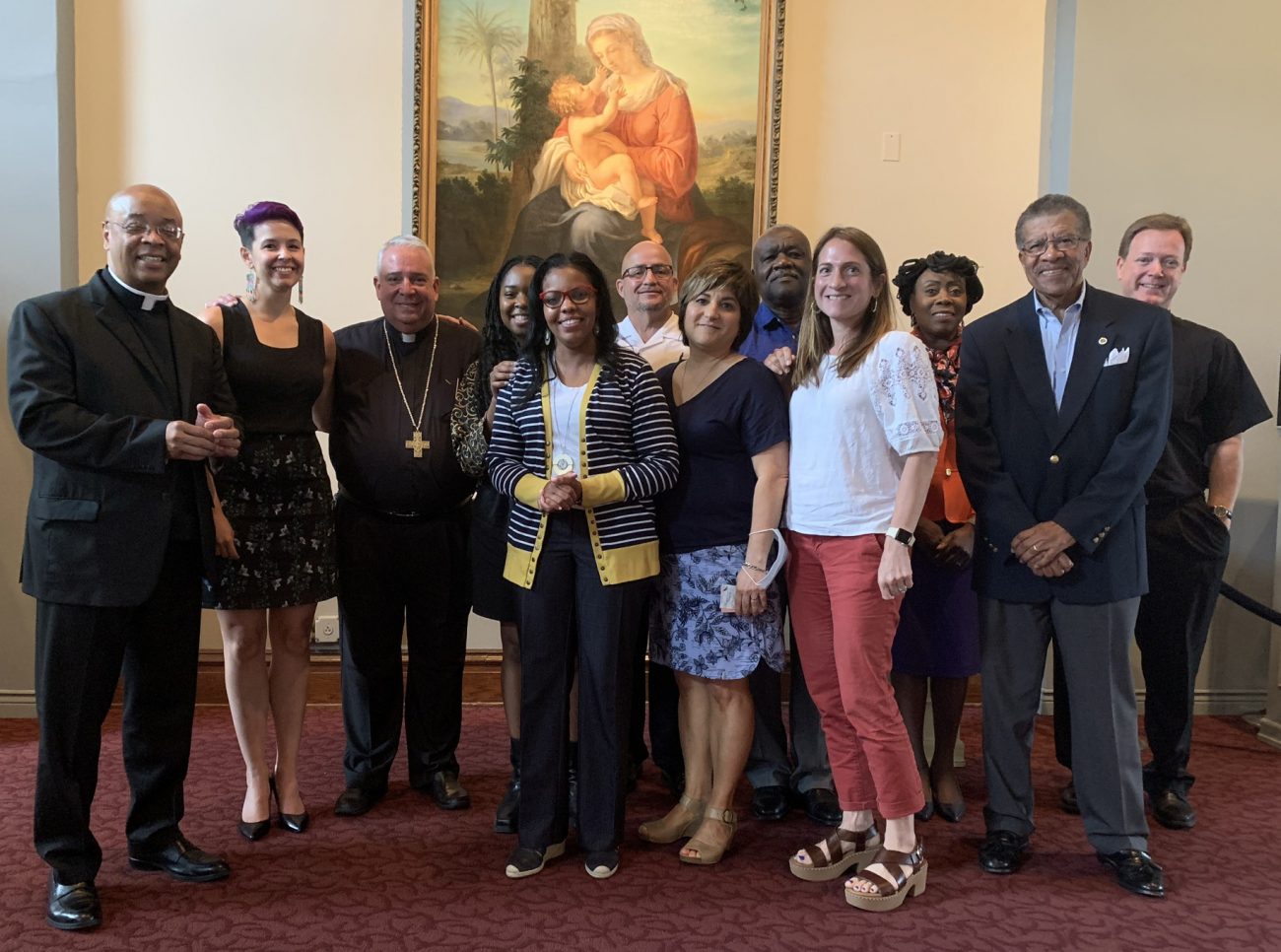 Members of the archdiocesan Commission on Racial Healing are seen with Archbishop Nelson Pérez during a June 26 retreat at St. Charles Borromeo Seminary in Wynnewood. Gina Christian)

NEXT: Faith and fun speak the same language at deaf summer camp