Down on the farm, they’re raising crops and lifting spirits 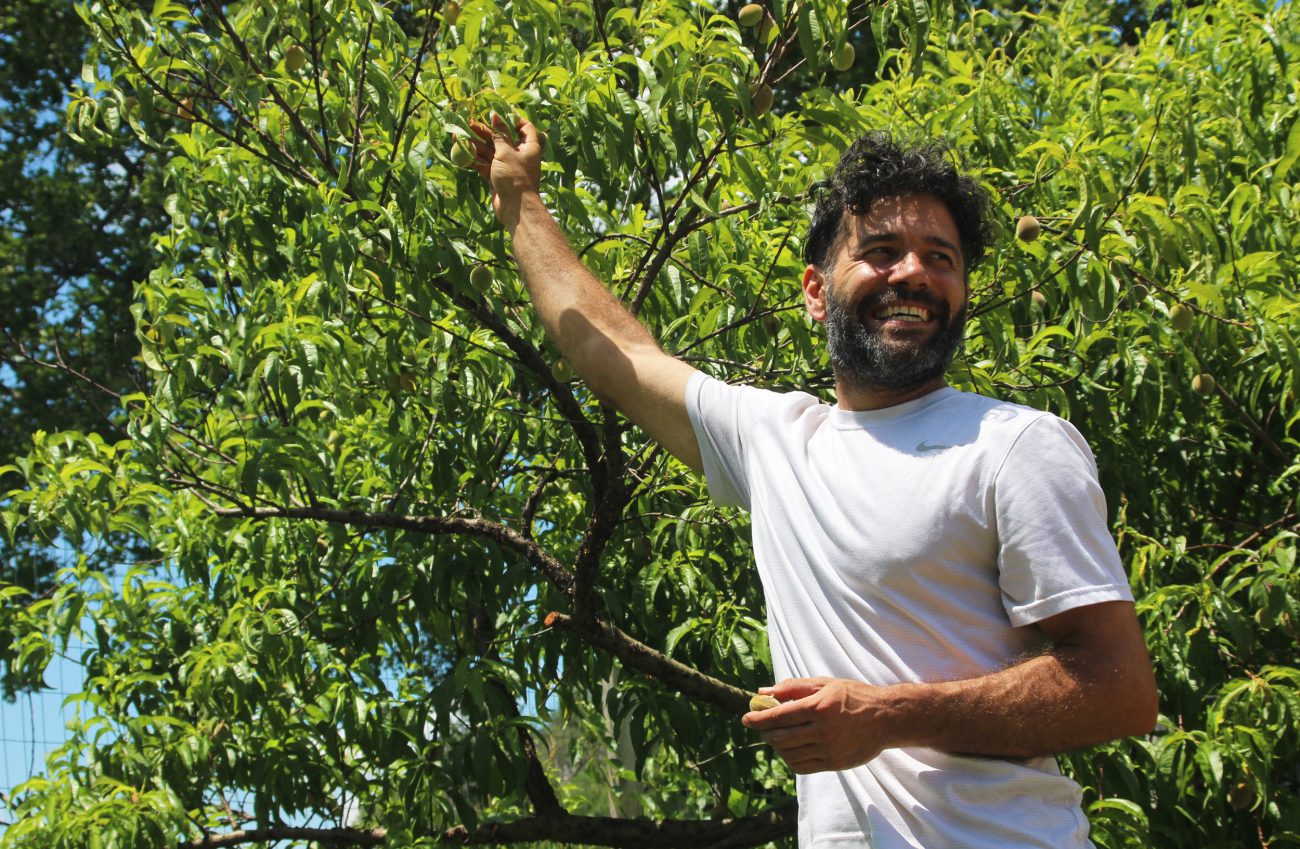 An archdiocesan food pantry is literally growing — and raising a bumper crop of fresh produce, flowers and goodwill in the process.

Martha’s Choice Marketplace, an outreach of Catholic Social Services (CSS), recently launched a community farm whose nine and a half acres are already flourishing with rows of pumpkins, potatoes, garden herbs, sunflowers and black-eyed Susans.

Located on the grounds of the former St. Gabriel’s Hall in Audubon, the farm is just under 10 miles from CSS’s Montgomery County Family Service Center in Norristown, where the food pantry is housed.

The pantry – a beneficiary of the Catholic Charities Appeal, and the largest emergency food cupboard in Montgomery County – distributed over 1.6 million pounds of groceries to more than 6,000 households in 2020, a 60% increase from the previous year. Harvests from the new farm will stock both Martha’s Choice and other food pantries in Montgomery County.

Both the pantry and the farm take their names from Martha, the sister of Mary and Lazarus, whom Scripture describes as offering hospitality to Jesus (Luke 10:38-42, John 12:2) – and serving up “relationships between people and organizations” is at the heart of Martha’s Choice, said pantry manager Patrick Walsh.

“The farm has allowed us to expand so we can invite more people to come and participate,” he said. “It’s just this amazing occasion to do more in bringing people together from all over the place for something that’s really worthwhile — helping to grow food, and then getting that food to those who need it in a way that’s dignified and respectful.”

“It’s the universal portal into everything else in our lives,” he said. “Everyone can get behind it … no matter what faith or political agenda you have.”

Many hands on the farm

For that reason, Martha’s Choice and its farm continue to attract partners and volunteers “from so many different backgrounds,” Wenger said. 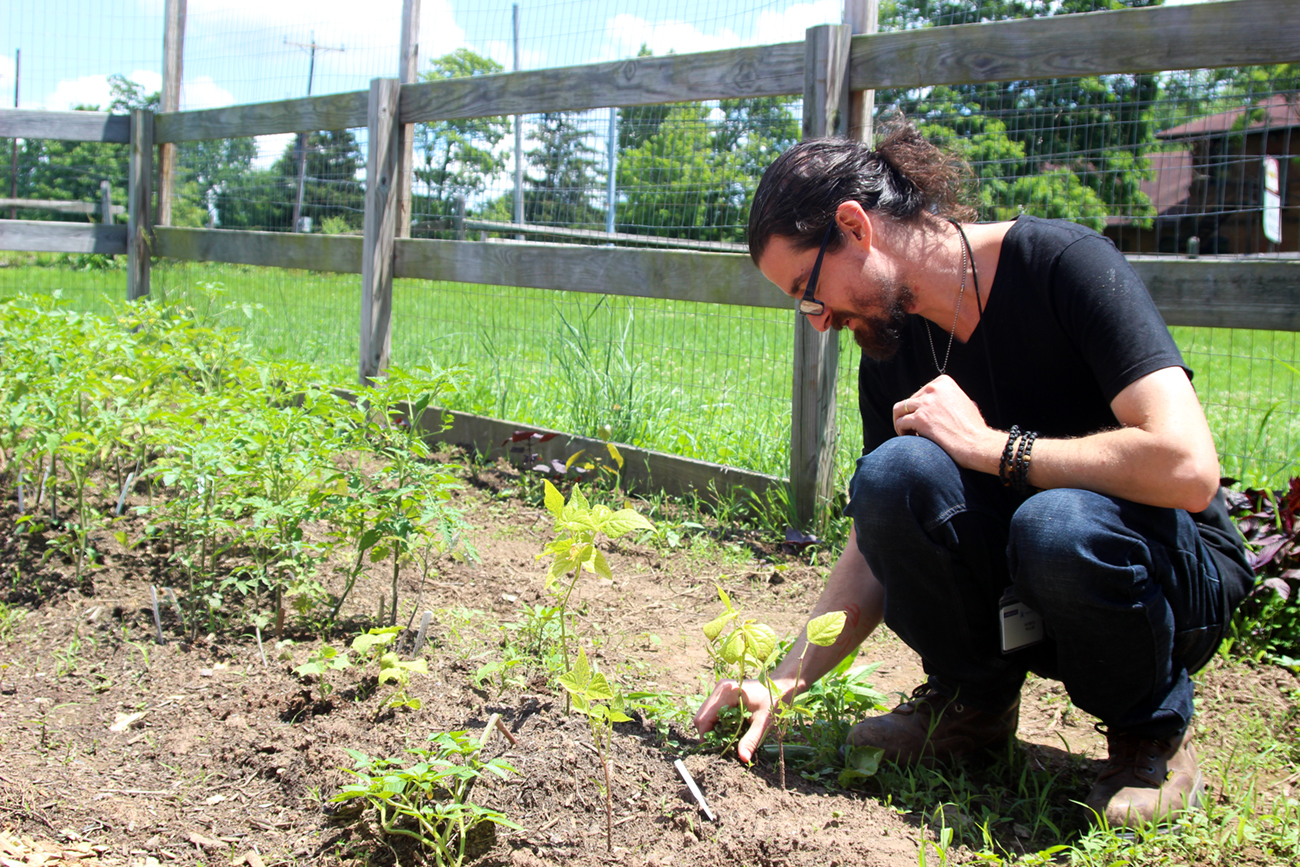 With CSS providing the land and the majority of funding, the farm has received “outrageously helpful” support from a number of archdiocesan parishes, said Walsh, including St. Eleanor in Collegeville, Epiphany of Our Lord in Plymouth Meeting, St. Helena in Blue Bell, Mother of Divine Providence in King of Prussia, St. Titus in Norristown and Sacred Heart in Swedesburg.

Candidates from the permanent diaconate program at St. Charles Borromeo Seminary in Wynnewood, along with volunteers from Cabrini University, have also been rolling up their sleeves to work on the farm, said Walsh.

Nearby Victory Church, an Assembly of God congregation, supplied what Wenger called “a tremendous crew” of some 40 volunteers who built raised garden beds and filled them with soil.

Staff from Harleysville-based Garden of Hope, which operates a network of community gardens serving area food banks, is helping to till and tend the fields. In addition, the nonprofit donated seed corn along with a thousand pounds of potatoes that will hopefully yield “about 15,000 pounds” of spuds, said Wenger.

To better serve the largely Hispanic clients of Martha’s Choice, he and Walsh consulted with Norristown-headquartered Aclamo, whose family service centers focus on Latino outreach.

“We’re growing foods that are more pertinent to (Hispanic) cuisine,” said Walsh, with “cilantro, tomatillos and various peppers and onions” among the latest plantings.

HopeWorx, a Norristown nonprofit that advocates for adults with mental illness, has its own plot, as does the Montgomery County Anti-Hunger Network.

Officials from Lower Providence Township are also assisting with the farm.

“One of the township supervisors is a neighbor,” said Walsh. “She’s been helping us build raised beds.”

Keeping all those fields and farmhands organized is manager Jesse Antonini, who took on his current role after almost a decade with grocery chain Trader Joe’s. 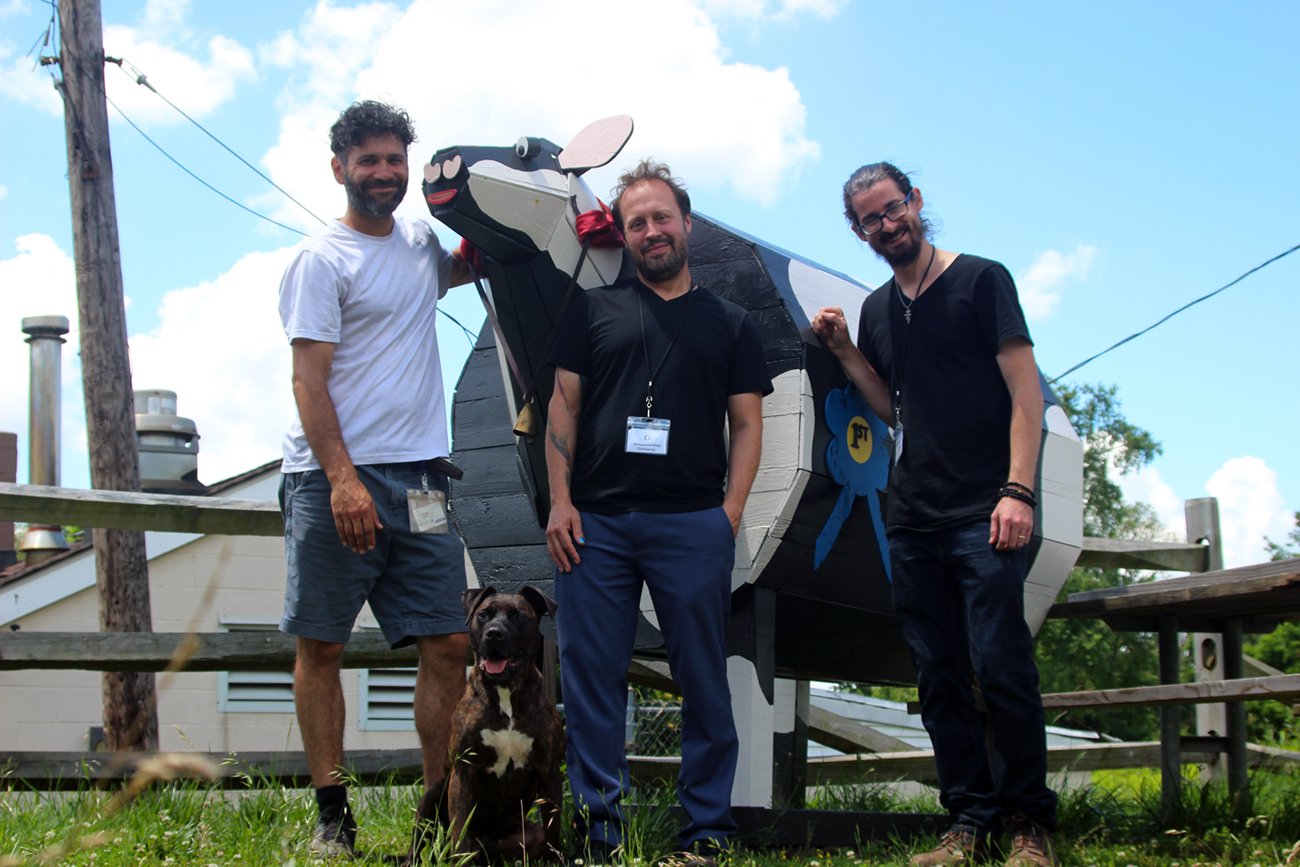 (Left to right) Jesse Antonini, Eli Wenger and Patrick Walsh are joined by Antonini’s dog Buster near a whimsical cow statue on at Martha’s Community Farm, June 15. The figure was used to calm livestock when the grounds belonged to the now-closed St. Gabriel’s Hall program for adjudicated youth. (Gina Christian)

“I came on board just for this,” said Antonini, surveying the beds with his dog Buster, whom he calls the “farm mascot.”

Transforming land into a community garden requires an eye for detail, Antonini said, even when the acreage has seen previous agricultural use.

The current farm spans what was once the Mitchell Program, an intensive 120-day residential program within the now-closed St. Gabriel system. As part of their treatment, male youth adjudicated to the program cared for livestock such as cows, goats, chickens, llamas and alpacas.

Fortunately, said Antonini, the animals’ waste didn’t necessitate soil remediation (unlike cat and dog waste, which cannot be used near edible plants) – but a steady stream of local traffic means that all garden beds “have to be 100 feet from the road, so that car pollutants don’t land on the crops,” he said.

Another concern is ensuring access for those with disabilities, said Antonini.

“How is someone with a wheelchair going to get to the garden?” he asked. “Actually, there isn’t an ADA (Americans with Disabilities Act) standard for community gardens, so we’re using playground guidelines. We created a path through the basketball court.”

Along with its burgeoning crops, the farm has sprouted a number of artistic projects that promote both beauty and healing, Antonini said.

A garden fence has been adorned with glass beads thanks to Brush with the Law, a Montgomeryville nonprofit that connects professional artists with at-risk populations to create public art displays. As they reflect the sun’s rays, the beads complement the circular arrangement of nearby flower plots for an overall theme of “light and growth,” said Antonini.

Plans for a beekeeper and a tea garden (courtesy of OMA Herbal Teas in Schwenksville) are also in development, he said – and the possibilities are endless.

“The farm is like a software platform, where developers come in, write different programs and produce a lot of variety in the ecosystem,” said Antonini. “People and nonprofits are coming here, creating this ecosystem which is thriving and helping people to thrive.”

And the harvest is more than a feast for the senses, said Walsh.

“It’s spiritually transformative,” he said. “People are transformed by that work and that love. … It makes real a lot of things that people might be poetic about … these spiritual ideas we have about grace and love, and loving God and loving each other. It makes it all very real, and it’s beautiful.” 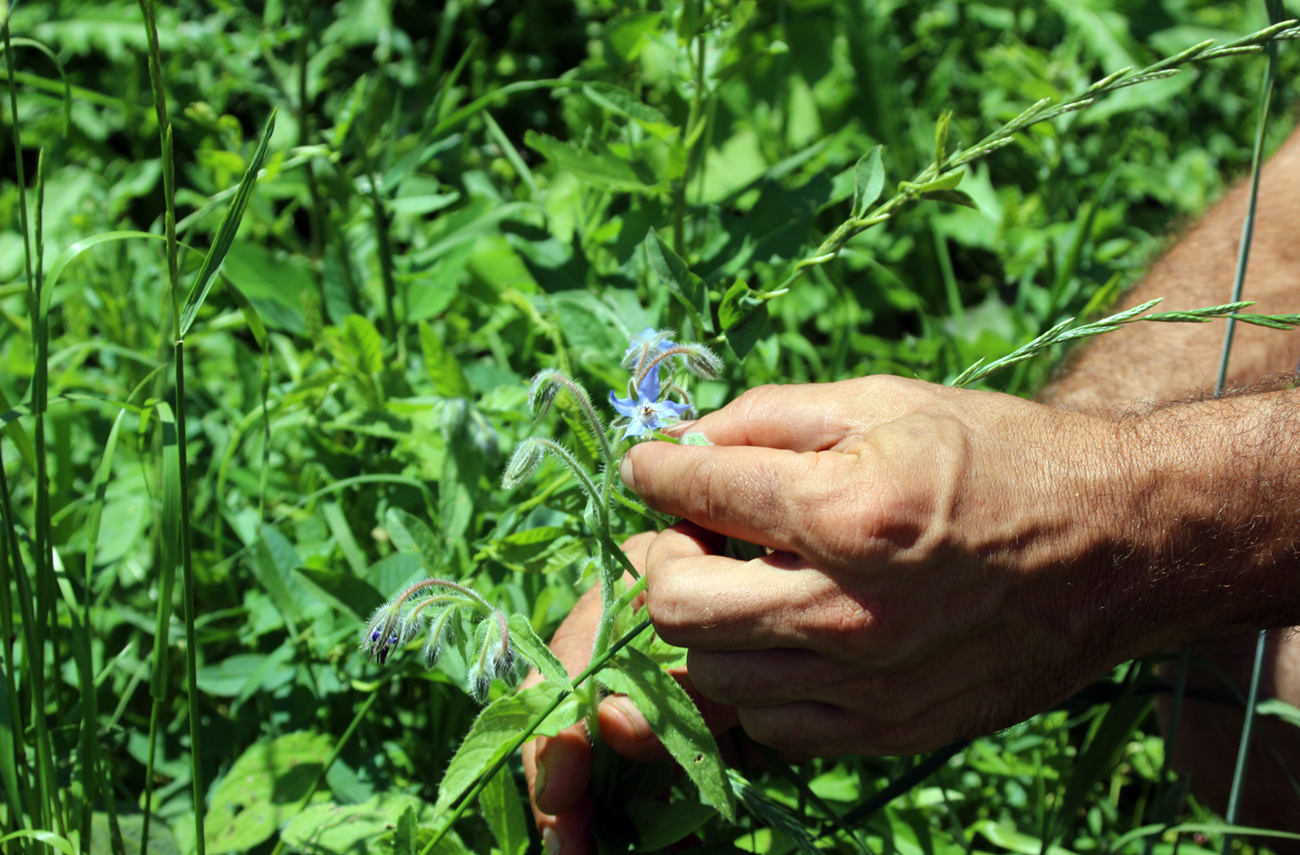 Jesse Antonini, manager of Martha’s Community Farm in Audubon, examines a flowering plant in one of the many sections of the 9.5-acre spread, June 15. (Gina Christian)