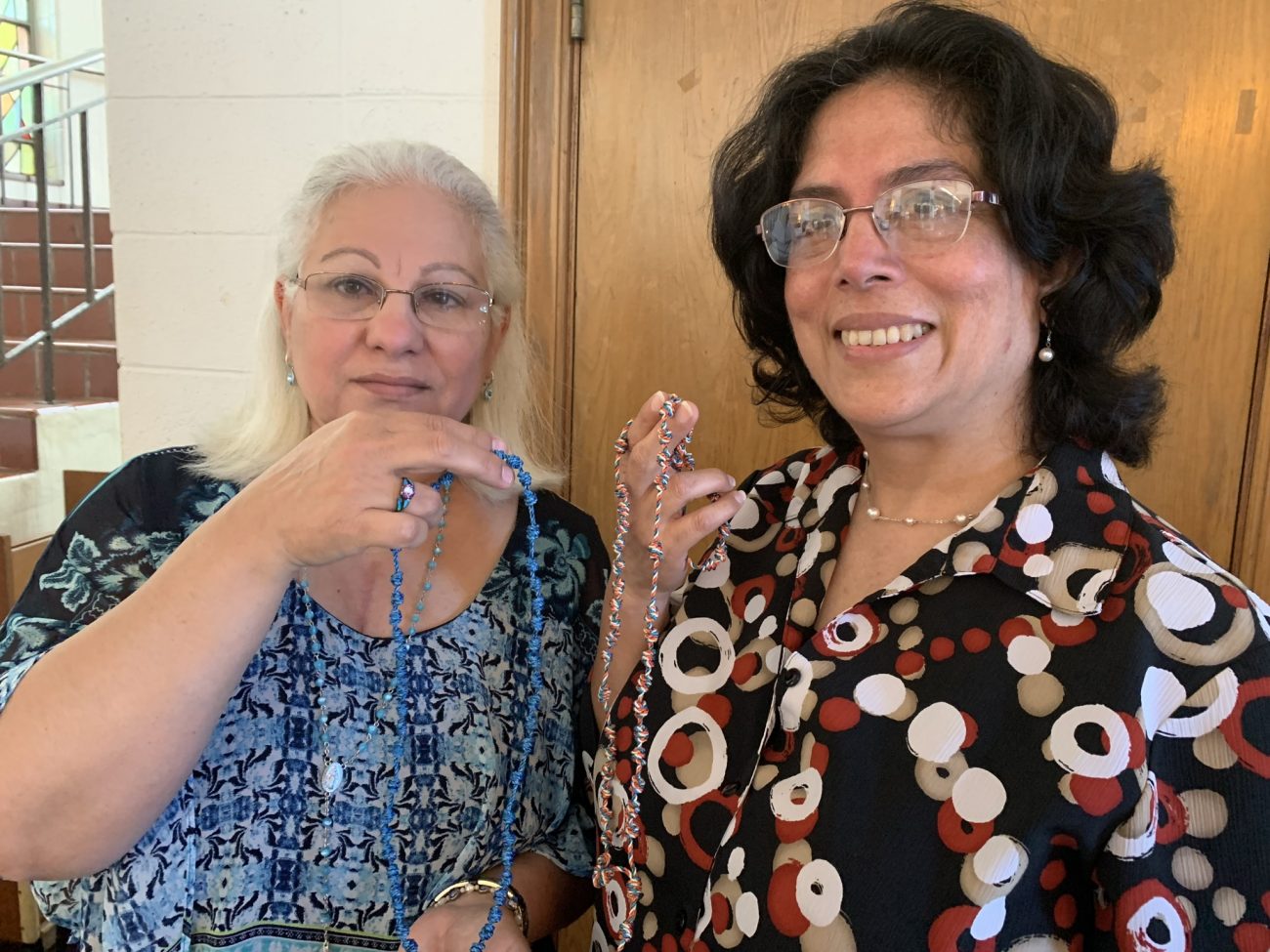 When a local nun heads to the U.S-Mexico border for two weeks of mission work this month, she’ll be taking a bit of home with her: dozens of handmade rosaries from area faithful.

A group of parishioners at St. William in Northeast Philadelphia spent hours creating close to 70 twine rosaries for Immaculate Heart of Mary Sister Rose Patrice Kuhn. The knotted chaplets feature the colors of the Mexican flag – green, white and red – in honor of Our Lady of Guadalupe, with others designed in blue, a color traditionally associated with the Blessed Mother.

Two weeks ago, the crafters surprised Sister Rose with baskets of the colorful cords after a Sunday Mass at which the parish’s Spanish-speaking community prayed for her work at the border and at her new assignment to St. Agnes Parish in West Chester.

With the rosaries tucked in her suitcase, Sister Rose will join more than 200 nuns from across the nation as part of a Catholic Charities USA (CCUSA) effort to provide food, clothing, pastoral support and transportation to thousands of asylum seekers. The agency’s ongoing outreach has been providing critically needed humanitarian aid to record levels of migrants fleeing violence, drug trafficking, poverty, persecution, war and natural disasters.

Following the reversal of the “Remain in Mexico” policy earlier this year, asylum seekers can now stay in the U.S. during their immigration proceedings, as was the case prior to January 2019. CCUSA’s shelter operations – located in the dioceses of San Diego, Tuccon, Brownsville and Laredo, and in the Archdiocese of San Antonio – have become lifelines for migrants whose journey is “hard, very hard,” said St. William parishioner and rosary-maker Guadalupe Da Costa Montesinos.

Now director of the Hispanic Institute at La Salle University, Da Costa herself arrived in the U.S. 23 years ago from her native Peru, where she and her family “had to endure 10 years of terrorism” due to both the Maoist Shining Path and Marxist Túpac Amaru movements of the 1980s and 1990s.

Amid campaigns of murder, massacre and torture, Shining Path members routinely attacked the nation’s electricity grid by blowing up high-voltage transmission towers, leaving millions of Peruvians in the dark and costing the country billions of dollars in losses. 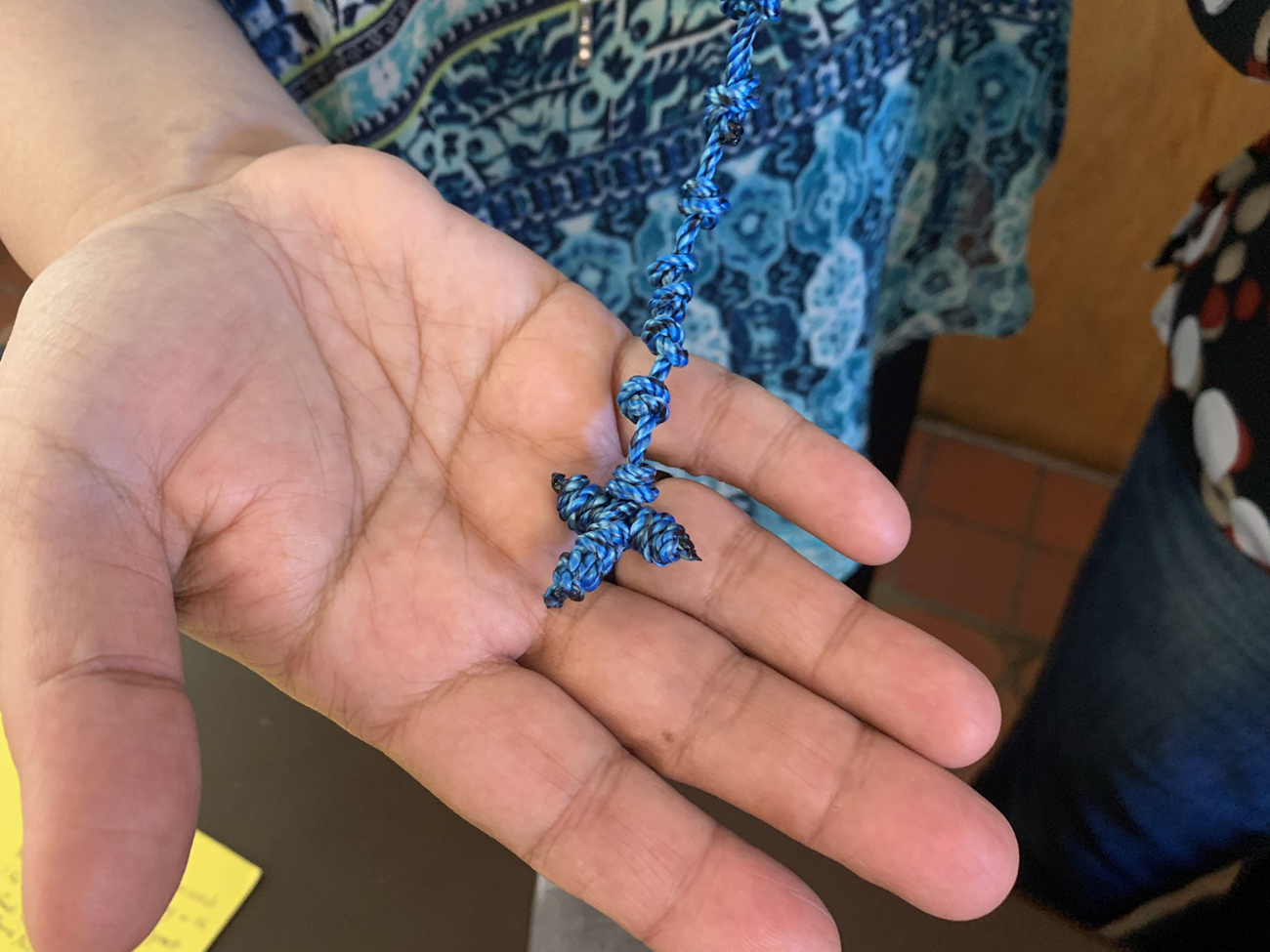 Lucy Rodriguez of St. William Parish displays a knotted cord rosary she and other parishioners made for migrants at the U.S.-Mexico border, June 27. (Gina Christian)

“I was in high school, and it was so hard to study and meet my deadlines when suddenly at 10 p.m. the lights would go off,” Da Costa said. “It was really, really to grow up in such a violent time.”

From her own experiences, she knows that building a new life in the U.S. is “difficult” under the best of circumstances.

“Even though I came here with my bachelor’s degree and a profession, still you are an immigrant, and when you come to a different country, you don’t have everything you need,” she said. “You have to start from scratch.”

Simply moving from one place to another within the U.S. can be overwhelming, said fellow rosary-maker Lucy Rodriguez, who moved to the mainland from Puerto Rico as a child.

“I always pray for immigrants,” she said. “They suffer a lot, and we as Christians need to add those people to our prayers.”

And that’s exactly what the rosary-makers did as they knotted the cords marking the various decades of the beloved devotion.

“The idea was not only making the rosaries, but praying for the people, for the ones that will receive, use or even wear the rosaries,” said Da Costa.

They group learned from an expert, she said: Sister Rose herself, a longtime rosary-maker who doubled down on her quotas during COVID — and ended up donating rosaries to the very individuals who were trying to surprise her with their own creations.

“She gave them to me, and I’m making her rosaries,” laughed Da Costa.

The prayers during production are no less powerful if the maker is uncertain of the final recipient, said Sister Rose.

“Usually when I make a rosary, I don’t know who I’m making it for,” she said. “So I make it and as I pray it I just say to the Lord, ‘This is for whoever receives it,’ and he knows. So if I give it to somebody I’ll say, ‘I prayed this for you. I didn’t know you at the time, but the Lord knew this rosary was for your intentions.’”

Fittingly, the hardest part of making the twine rosaries is knotting the cross.

But “the beautiful thing” about the design of the cross is that it contains “five knots, like the five decades” of a given set of rosary mysteries, she said.

“You have to burn the end of the cord in a candle flame, to make it stay together,” said Sister Rose.

The rosaries “may seem a simple thing, but they’re not,” said Da Costa. “This represents our prayer in each Hail Mary, each Our Father – so it’s our prayer as well.”

NEXT: AbbeyFest returns to the place where it all began, in person