AbbeyFest returns to the place where it all began, in person

A popular Catholic music festival is set to return to the grounds of a local monastery, now that COVID restrictions have been eased.

The all-day AbbeyFest will take place Sept. 18 at Daylesford Abbey in Paoli, with a full slate of contemporary Catholic and Christian musical artists. Headlining the show will be nine-time Grammy nominee and three-time Dove Award winner Matt Maher, whose hits “Lord, I Need You” and “Because He Lives (Amen)” are mainstays on Christian radio playlists.

The lineup also includes Firehill Worship, the Scally Brothers, We Are Messengers, Alverlis and Archbishop Nelson Pérez, who will celebrate Mass at the gathering.

Rounding out the day will be Eucharistic adoration, confession, food, merchandise and kid-friendly activities, with the focus on “faith, music and family,” said festival creator Mark Griswold, director of family life at St. Norbert Parish in Paoli.

Due to COVID, last year’s AbbeyFest moved online, as a series of Facebook Live concerts took the place of the in-person gathering. The digital performances “were well received,” said Griswold. “People loved and appreciated that we were staying connected.”

But as pandemic protocols were rolled back in May and June, he and his team gained confidence they could hold the outdoor event “while still maintaining care and concern for everyone’s safety.”

Use of the abbey’s buildings will be strictly limited, and the priests and brothers of Daylesford’s Norbertine community (which also serves St. Norbert Parish) will “stay in the residence” if they want to limit their exposure to festival-goers, he said.

Griswold expects attendees will “make good decisions for themselves” about vaccinations, masks and social distancing, while organizers will remain “sensitive and responsive” to public health concerns about large-scale gatherings. 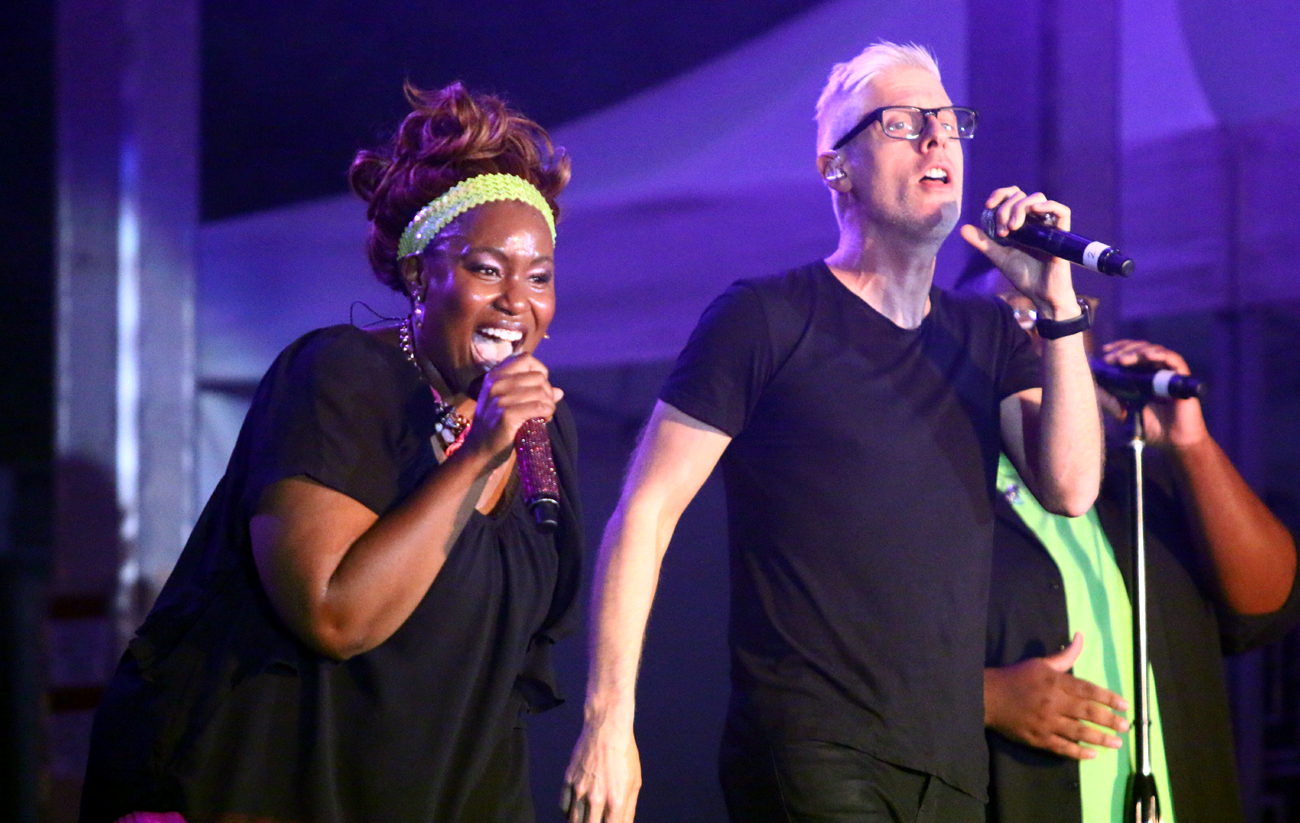 Matt Maher (right) joins Mandisa during a duet at the 2017 AbbeyFest on the grounds of Daylesford Abbey in Paoli. Now in its seventh year, the popular festival will return to in-person performances after shifting to virtual concerts under COVID restrictions. (Sarah Webb)

Live music events and sports gatherings have largely resumed throughout the greater Philadelphia area – among them, the Made in America Festival, which will draw thousands to the city’s Benjamin Franklin Parkway Sept. 4 and 5.

That same desire for communal celebration, particularly after months of COVID-related isolation, is at the heart of AbbeyFest, said Griswold.

“Our hope is to draw families, young and old,” he said. “We have a particular appeal to the young, but we hope parents would be so engaged by the fact that kids are excited that they too would be drawn in.”

Having previously lived in southern Louisiana, Griswold was inspired to launch the annual gathering after seeing an outdoor youth festival some two decades ago at Saint Joseph Abbey, a Benedictine monastery and seminary college near New Orleans.

“It was a day-long, outdoor kind of youth fest for Catholics, with speakers, music, Mass, confession, adoration,” he said. “The first year, about 500 young people attended. Then a few years later, it had grown to 5,000, with youth coming from all over the Gulf South.”

Along with the Louisiana-based Abbey Youth Festival (which has been postponed this year), the Cleveland Diocese’s annual FEST (now in its 21st year) has also served as a model for the Daylesford event. According to Griswold, Archbishop Pérez participated in the FEST during his tenure as Bishop of Cleveland.

While organizers “are very upfront about (the) Catholic underpinning of the day,” he added, AbbeyFest also attracts Christians from several denominations, thanks to the broad appeal of the music.

In addition to his own career as a singer-songwriter, Maher has also penned hits for a number of acclaimed contemporary Christian artists, including Chris Tomlin, Crowder, Third Day, Jeremy Camp and Hillsong. The familiar tunes resonate with AbbeyFest’s entire audience, said Griswold, and even prompt moments of ecumenical encounter.

“Some say, ‘We didn’t know Catholics could sing like this,’” he said. “For some of our Protestant brothers and sisters, it’s an eye-opening thing to see Catholics alive in the faith.”

As an “ambassador” of faith and music, Maher introduces Catholics to worship songs they might not otherwise embrace, said Griswold – and his artistry has been part of AbbeyFest since its inception, he added.

While serving as a youth minister at St. Norbert, Griswold often walked around Daylesford Abbey in the evenings, praying his rosary and envisioning a festival on the grounds. But it wasn’t until 2013, when future AbbeyFest board chair David Wilbur moved to the parish, that the Canadian-born Maher and his music got the show going.

“I lead music at a Sunday night youth Mass, and Dave came up afterward and said, ‘You played three Matt Maher songs,’” he said. “I was shocked. Your average Catholic Mass attendee wouldn’t have known that.”

The two decided to approach Maher about performing in concert in the gym of St. Norbert’s Parish School.

“We sold out, with 600 people attending,” said Griswold. “Daylesford’s abbott at the time came up to me and said, ‘What are we going to do to top this?’ And that’s when I knew this vision would come to fruition.”

As the festival has grown since its 2014 launch, so have its ranks of volunteers, which now average about 340 – along with its expenses, which are heavily subsidized by sponsorships from Catholic businesses, since ticket sales alone do not fully fund the project.

Deacon Hank Fila, advancement director for both St. Norbert and AbbeyFest, estimates that the concert requires some $110,000 in addition to the ticket purchases, which are modestly priced and often discounted.

Both the Foundation for Catholic Education, headed by Jerry Parsons, and multi-trade contractor J.J. White have “doubled their sponsorships” this year, said Deacon Fila, since “they believe in the mission.”

Sponsorship opportunities are still available, as are tickets, he added — and the money for both is well invested.

“We celebrate faith and families,” he said. “It’s just a beautiful day.”

To learn more about AbbeyFest and to purchase tickets or become a sponsor, visit the festival website.

NEXT: Mass obligation reinstated as of Aug. 15, Archbishop Pérez says