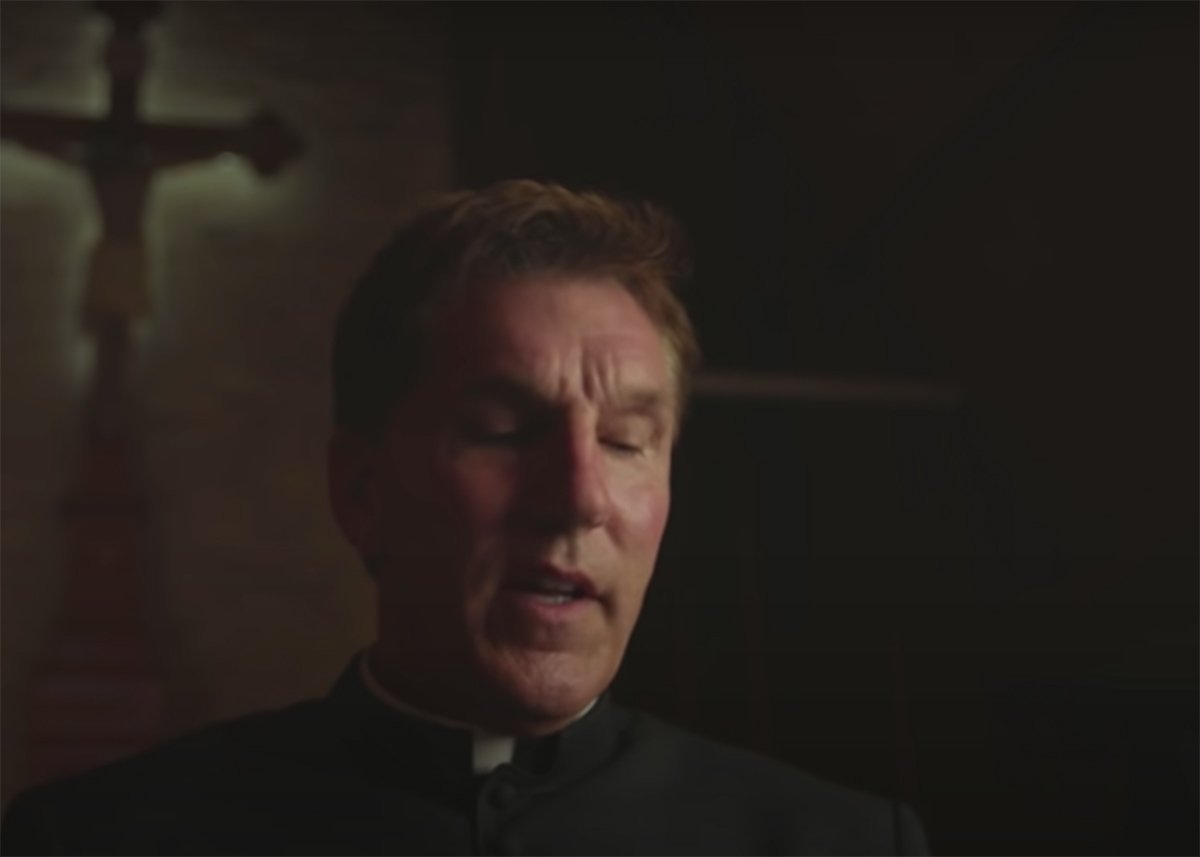 Father James Altman, pastor at St. James the Less Catholic Church in La Crosse, Wis., is seen in his YouTube video. In the clip he attacks Catholics who are Democrats. Bishop William P. Callahan removed him as pastor July 9, 2021. (CNS photo/YouTube screen grab)

LA CROSSE, Wis. (CNS) — Bishop William P. Callahan of La Crosse July 9 removed a pastor who has been stirring controversy since last fall when he criticized Catholic Democrats from the pulpit, saying they must “repent” because of the party’s support for legal abortion or “face the fires of hell.”

More recently, Father James Altman, pastor of St. James the Less Parish in La Crosse, called the U.S. bishops “ineffective” for “their failure to stand up against the godless government over the past 14 months,” referring to the pandemic and COVID-19 restrictions that all houses of worship have been required to follow to stem the spread of the virus.

A diocesan statement said Bishop Callahan “and his diocesan representatives have spent over a year, prayerfully and fraternally, working toward a resolution related to ongoing public and ecclesial concerns” about Father Altman’s ministry.

“The obligation of a bishop is to ensure that all who serve the faithful are able to do so while unifying and building the body of Christ,” it said.

“In accordance with the norms of canon law,” the statement said, Bishop Callahan issued “a decree for the removal” of Father Altman as pastor. “The decree is effective immediately and for an indeterminate period of time. During this time Father Altman must refrain from exercising the function of pastor.”

The diocese “will be working over the next weeks to arrange for the ongoing pastoral care of the parishioners of St. James the Less Parish,” it said. The bishop and all the leadership of the diocese ask for the consideration of respect, safety and prayers at this time for all involved.”

On May 23 Father Altman told Massgoers that Bishop Callahan had asked him to resign for being what he called “divisive” and “ineffective.”

Father Altman told his congregants that he was being singled out for preaching “the truth” about “all the evil that confronts us.” He said he would not resign and was contesting the bishop’s request.

He said his canon lawyer had “asked for the justification and a chance to review what was in my file that suggested I was so divisive and ineffective. … I’m no expert on canon law, but understand that while we are contesting (the) bishop’s request — and we are — he could in theory appoint a parish administrator whilst I remain a pastor without duties until the appeal goes through Rome, which could take up to a year or more.”

On May 24, the Diocese of La Crosse issued a statement noting that Father Altman had made public Bishop Callahan’s request he resign “as well as his intent to decline the request.”

“As a result, the Diocese of La Crosse will respond in accordance to the canonical process as needed for the removal of a priest from his office as pastor,” it said, adding, “It is important to note that this is not a penal remedy but a pastoral remedy.”

The diocese said that “during the past year, concerns have been expressed related to” Father Altman’s ministry, and Bishop Callahan and canonical representatives “have worked to fraternally and privately address those concerns.”

“The process has been pastoral and administrative with a desire toward a just resolution among all parties,” the May 24 statement said.

This followed the priest’s nearly 10-minute YouTube video posted Aug. 30, 2020, by Alpha News MN on its website. As of July 9, over 1.3 million people had viewed that video.

The La Crosse Tribune reported July 9 that through crowdfunding sites, Father Altman has received over $722,000 from supporters. in support.