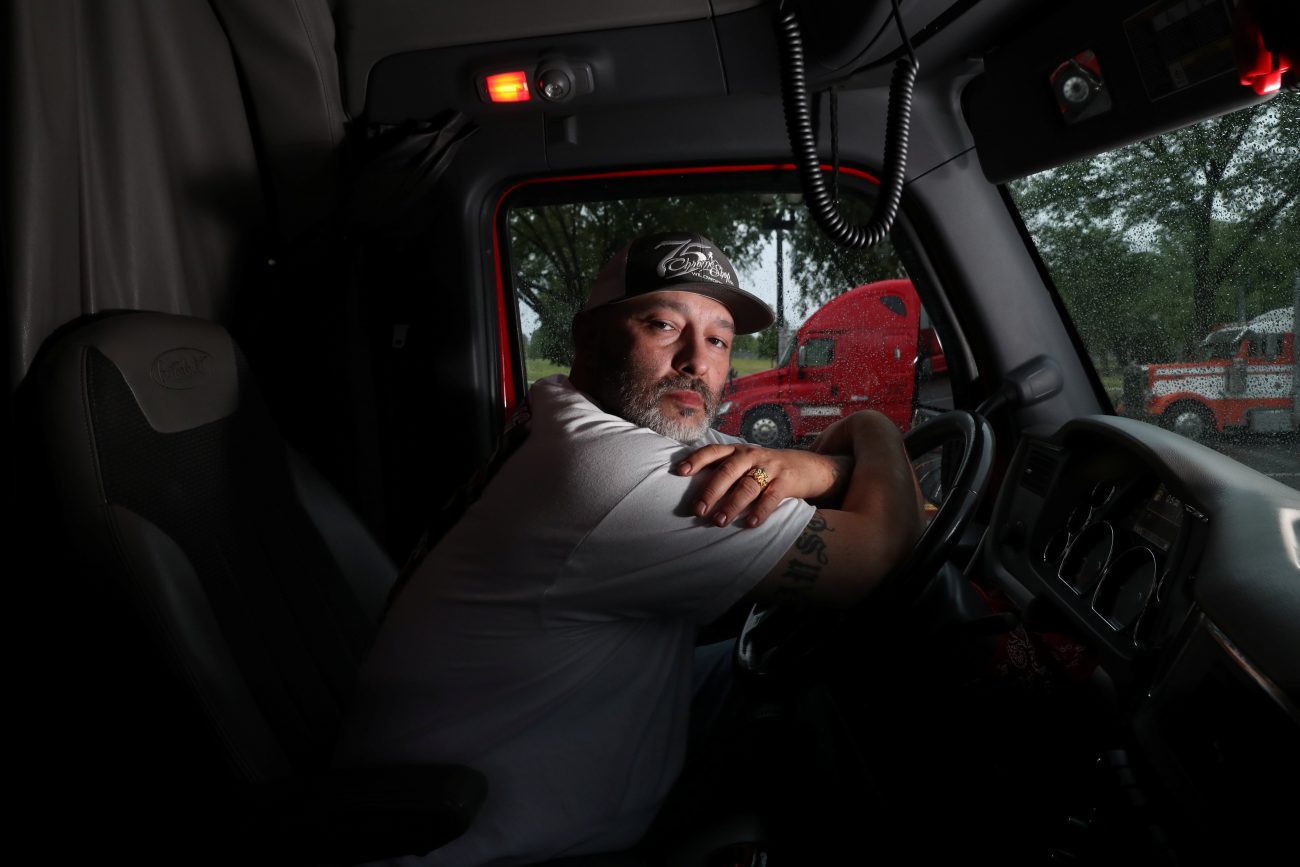 Greg Anderson poses for a portrait in his truck in Washington May 8, 2020. (CNS photo/Leah Millis, Reuters)

As the pastor of the increasingly diverse St. Joseph Parish in Vancouver, Washington, Father Gary Lazzeroni finds himself ministering to people in a wide variety of work settings.

Some parishioners hold well-paying jobs with benefits. Others, especially a rising number of Hispanic immigrants, are in low-wage positions whose work on farms, in construction and in service positions are often overlooked or taken for granted.

All workers, especially those who were considered essential during the pandemic, deserve to be protected on the job with basic rights, including the freedom to organize a labor union if they desire, Father Lazzeroni told Catholic News Service.

A member of the Labor Priest Network, Father Lazzeroni is one of nearly 400 religious leaders who have signed on as public supporters of a statement calling for passage of the Protecting the Right to Organize Act currently pending in Congress. Known as the PRO Act, the bill proposes the most significant overhaul of labor law in decades.

“It’s really about human dignity,” the priest said of the bill. “This act is consistent with the teaching of the church going back to the 19th century.”

Muslim, Christian and Jewish representatives spoke in favor of the measure, which passed the House of Representatives March 9 225-206, a largely party-line vote. They called on the Senate to follow suit. No action has been scheduled in the upper chamber.

Business groups such as the U.S. Chamber of Commerce, however, oppose the legislation, saying it would kill jobs.

The religious leaders’ statement declared that workers’ rights have been “under assault” for decades, and called union membership without retaliation or threat “a fundamental human right.”

“This right can unlock the door to a just wage, a safe workplace and respect on the job for America’s working families. Workers’ right to organize and to be heard is a critical part of any healthy democracy, and is essential to ensuring that human beings are treated with dignity and not as mere objects or means to others’ ends,” it said.

The measure was introduced in the both houses of Congress in January at a time when overall union membership continues a decades-long decline. Its supporters say labor law reforms are needed to head off business management tactics ranging from threats to fire workers to closing an enterprise despite employee protections in the National Labor Relations Act of 1935.

The PRO Act would bar employers from retaliating against unionization efforts, permit independent contractors in the emerging “gig” economy to unionize and expand labor protections to immigrant workers. It also allows for penalties up to triple an employee’s wages when worker rights are violated.

In 2020, union membership stood at 14.3 million, about 10.8% of the workforce, the U.S. Bureau of Labor Statistics reported in January.

The figure represents an increase of 0.5% from 2019, even though overall union membership declined by 321,000. The bureau attributed the increased percentage of union members in the workforce to the disproportionately large decline in total employment compared with the loss of the number of union-affiliated jobs during the pandemic.

Public-sector union membership stood at 34.8%, more than five times higher than the rate of private-sector workers, which stood at 6.3%.

In contrast, the proportion of American workers who held a union card peaked at nearly 35% in 1954, according to the Congressional Research Service. The total number of union members peaked at 21 million in 1979.

“The fact that very few private sector workers enjoy the benefits of collective bargaining and the protection of a union are the reasons we need to reform labor laws,” he said.

Bishop John E. Stowe of Lexington, Kentucky, addressed the need for the bill during the news conference.

He earlier told CNS it is important for the Catholic Church to speak in favor of laborers’ right to organize and stress the dignity of work because it is “the cornerstone of Catholic social teaching.”

Labor law reform is needed, he said, because “we’ve lived in a few decades that have been pretty hostile to labor.” He cited “right-to-work” laws adopted by several states that have undermined labor unions and threats of firing for exercising the right to join a union.

Pope Francis repeated his support for worker rights in a June 17 video message to participants at the International Labor Organization’s “World of Work” summit. He warned that in hastily returning “to greater economic activity” after the pandemic, world leaders must “avoid excessive fixations on benefit, isolation and nationalism, blind consumerism, and denial of the clear evidence of discrimination against our ‘disposable’ brothers and sisters.”

“On the contrary, let us look for solutions that will help us build a new future of work based on decent and dignified working conditions, originating in collective bargaining, and promoting the ‘common good’ — a phrase that will make work an essential component of our care for society and creation,” he said.

Joseph McCartin, executive director of the Kalmanovitz Initiative for Labor and the Working Poor at Georgetown University and a convenor of the year-old interreligious network, told CNS the statement from religious leaders is meant to offer a prophetic voice in support of workers.

The act would “strengthen the ability of workers to speak for themselves,” said McCartin, a Catholic signer of the statement.

During the news conference, United Church of Christ Bishop Dwayne Royster, executive director of the multi-congregation Faith in Action Philadelphia, expressed concern that many of those who were classified as essential workers during the pandemic — delivery persons, those who provide car-ride services, warehouse workers, meatpackers, hotel and hospital cleaning staff — have been denied the right to organize by their supervisors and managers.

The future of the PRO Act lies in the Senate. Supporters admit passage faces long odds. President Joe Biden has said he would sign the bill if approved by Congress.

Father Timothy Graff, a signer of the statement and director of the Social Concerns Office of the Archdiocese of Newark, New Jersey, believes it’s the workers themselves joined by fellow churchgoers who may have the biggest influence on senators.

“My hope,” he told CNS, “is that one of the good things that come out of the pandemic is that people have more of a heart. … The swath of poverty is much wider than it was a year ago. So we need to raise our voices. As powerful as U.S. businesses are, as powerful as multinational corporations are, there’s nothing like the power of the people of God together with one voice.”