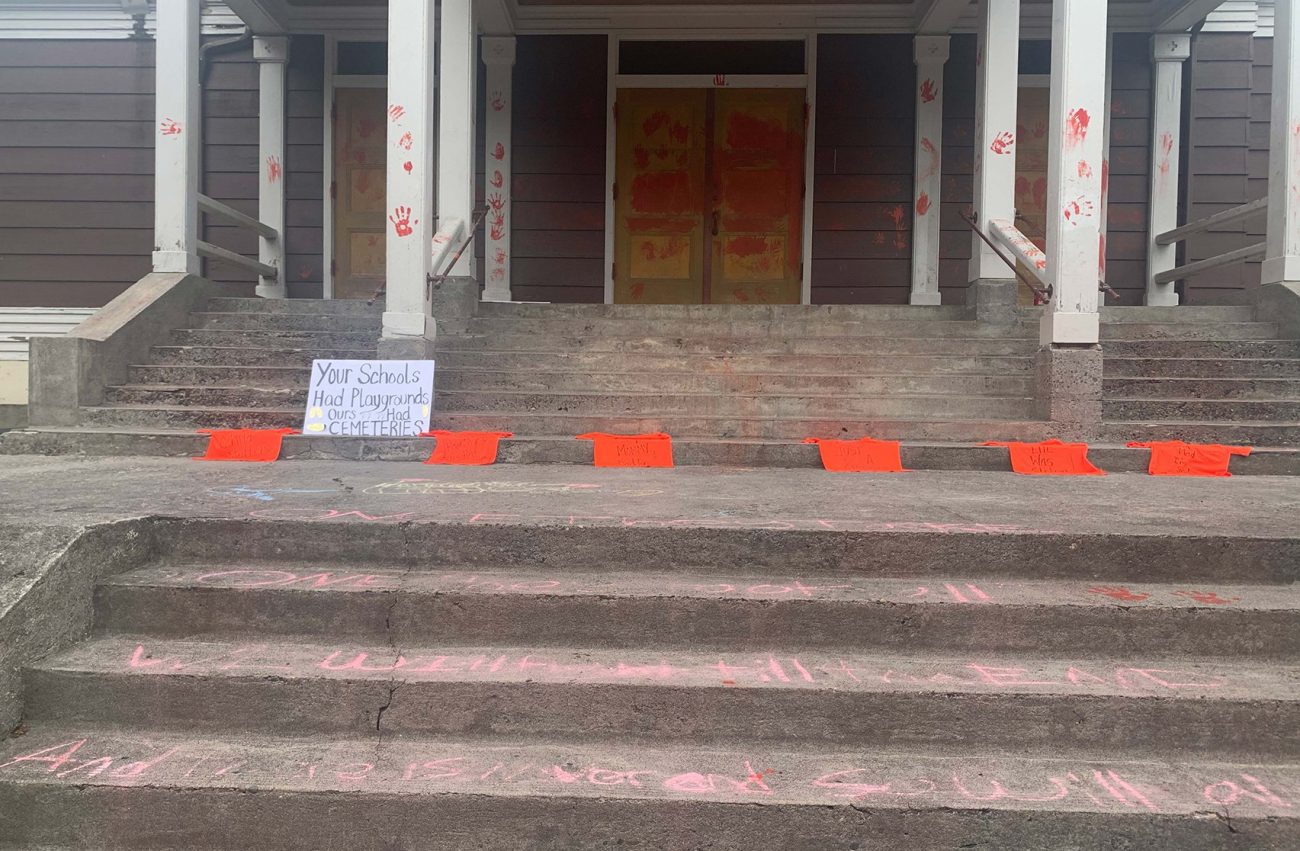 St. Francis of Assisi Church in Southeast Portland, Ore., is seen July 1, 2021, with red paint marking its doors, columns and steps. A group of protesters, including a number of children, dipped their hands in the paint and left the markings. A poster for the protest called it "a silent march and vigil to honor the Indigenous children and survivors of the U.S. and Canadian residential/boarding schools." (CNS photo/Father George Kuforiji, courtesy Catholic Sentinel)

PORTLAND, Ore. (CNS) — Four Portland Catholic churches have been vandalized in the span of about six weeks.

At least one incident involved a group protesting the recent discovery of unmarked graves at primarily Catholic-run schools in Canada, while other instances appear to be the work of disgruntled teens and individuals with general anger toward the church.

On June 26, a stained-glass window was broken at Northeast Portland’s St. Andrew Church and less than a week later, at St. Francis of Assisi Church in Southeast Portland, a group of protesters, including families with children, left red handprints on the church door, columns and steps.

Then late July 11 or early July 12, Holy Redeemer in North Portland had its doors spray-painted with an anarchist symbol and an obscene critique of colonialism.

Throughout the United States this year, there’s been increased vandalism, much of it protesting colonialism and white supremacy. Churches and religious statues have been among the targets.

In Portland, city officials reported complaints about graffiti at various locations were up nearly 400% since the pandemic began in March 2020.

In Canada, dozens of churches have been torched or vandalized this summer following the discovery of more than 1,000 unmarked graves at former residential schools for Indigenous children. Most of the schools were operated by the Catholic Church.

On Canada Day, July 1, when many Canadians opted to replace celebrations with large vigils, one of the vandalism cases in Portland occurred amid an evening protest in the city. 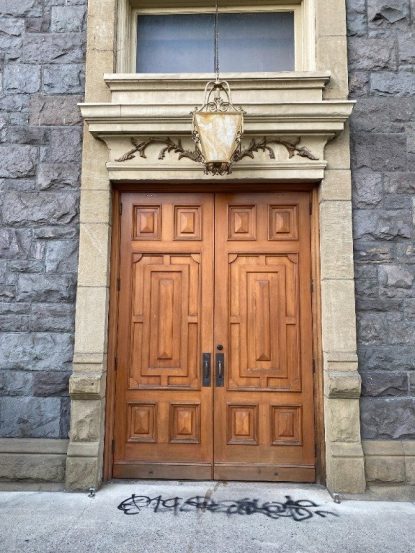 An estimated 200 people gathered to watch a movie, hear speeches and walk through the neighborhood that includes St. Francis at St. Francis of Assisi — a parish that long has ministered to area homeless through its dining hall.

The poster advertising the event described it as a “silent march and vigil to honor the Indigenous children and survivors of the U.S. and Canadian residential/boarding schools.”

At the church, protesters stopped and children were encouraged to dip their hands in red paint and place them on the doors, columns and steps.

Protesters left a sign on the church steps that read: “Your schools had playgrounds, ours had cemeteries.”

Father George Kuforiji, pastor of St. Francis, said he sympathizes with the anguish and sadness the protesters’ expressed but was distressed at their need to vandalize.

“Have your protest, yes, but to vandalize the church, a community that has nothing to do with the graves, that bothered me,” he told the Catholic Sentinel, newspaper of the Archdiocese of Portland. Members of the parish cleaned off most of the paint but some remains.

“Protests are a constitutional right,” but vandalizing property is a crime, said Lt. Greg Pashley, a spokesman with the Portland Police Bureau.

There was no police report for the vandalism at St. Francis, so Pashley could not say if it potentially could be considered a bias crime, also known as a hate crime. In Oregon law such a crime is defined as one motivated by bias against another person’s religion, race, color, disability, national origin, sexual orientation or gender identity.

“It’s disappointing and sad,” said Holy Cross Father Michael Belinsky, parochial vicar. “If someone has an issue, whatever it is, they made the choice not to talk to people face to face but act in the cover of darkness.”

Pashley said the police report for the incident indicates the graffiti at the church possibly could be deemed a bias crime. Yet to charge someone with a bias crime a suspect’s intent must be certain, “and that can be tricky to determine,” said Pashley. “Just words or symbols are not enough for us to know someone’s intent.”

Parishioners and the maintenance staff were able to remove the graffiti hours after it was discovered, and Father Belinsky was quick to say he did not want the incident “blown out of proportion.”

“We are not being persecuted,” he said. “It’s a crime and the police are looking into it,” but it’s not the persistent vandalism that’s occurred nationwide and locally. “We have not been subject to that,” he said, nor to the relentless, violent persecution Christians face in other parts of the globe.

Across the Willamette River from Holy Redeemer, St. Patrick Church near downtown Portland regularly is tagged with minor graffiti due to its urban location.

The recent incidents, however, were more significant and distressing for the parish community, said Samantha Barker, parish business manager. All were recorded on the parish’s security camera.

In early June an individual doused the base of the 132-year-old church’s steps with gasoline and lit the gas on fire. Portland Fire and Rescue was called out to help.

Later in June, a teen or young adult sprayed illegible graffiti on the ground near the front doors of the church and on a concrete column. He also performed an odd dance and started a smaller fire. On July 15, another vandal painted graffiti on the parish’s wooden doors.

“The dance and small fire may have been something satanic,” Barker said, noting the motive for the three incidents have not been officially determined.

St. Patrick staff attempted to remove the paint on the ground using a power washer but the lettering has proved difficult to eradicate. They hesitated to clean the doors for fear of damaging them. The parish now is considering what additional security measures to adopt.

At St. Andrew in late June, an individual or individuals knocked over a ceramic planter on the church’s steps and used a piece of the broken pot to smash in a stained-glass window at the front of the church.

Father Dave Zegar, pastor, estimates the broken window will cost more than $2,000 to repair. The church’s stained glass was installed in 1929, when the church was built.

Father Zegar believes the vandalism likely is the work of a small group of high schoolers who’ve been hanging around parish grounds throwing trash and turning over tables.