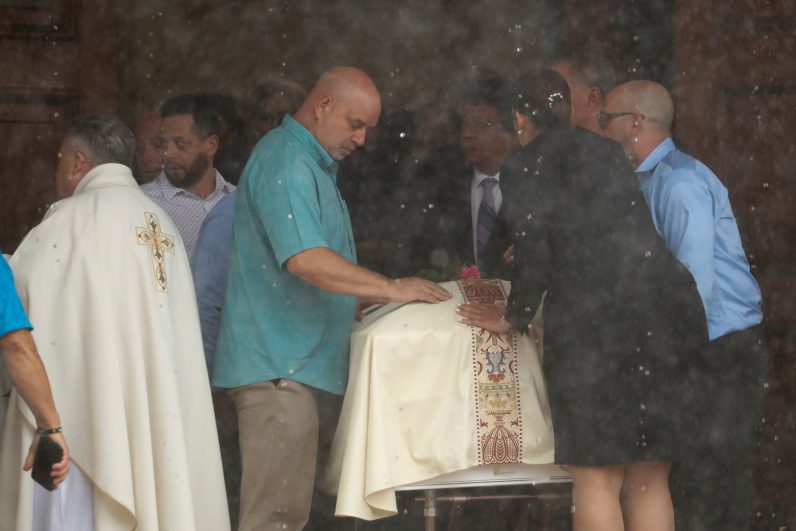 Friends and relatives touch the casket with the remains of a member of the Guara family after attending a funeral Mass at St. Joseph Catholic Church in Surfside, Fla., July 6, 2021. Marcus “Marc” Guara, his wife, Anaely “Ana” Rodriguez, and their daughters Lucia, 11, and Emma, 4, perished in the June 24 collapse of a Surfside condominium building not far from the Catholic church. Marcus Guara’s body was found June 26 and the bodies of his wife and daughters were found June 30. (CNS photo/Shannon Stapleton, Reuters)

SURFSIDE, Fla. (CNS) — Father Juan Sosa, pastor of the Catholic church that is close to the now-demolished condominium building in Surfside, held up a photo of 11-year-old Lucia Guara’s first Communion in 2019.

He placed it on the casket holding her and her sister, Emma, 4, during the funeral Mass July 6 for the girls and their parents.

“I would like to place it on her casket as a symbol of her union with Christ,” the pastor of St. Joseph Church said of the photo. A couple of minutes earlier he pointed to the church’s baptismal font where Emma was baptized four years ago.

“You can see that the girls were brought (here) by their parents but now Christ has encountered them at a different stage, at a different phase, in a different moment, because Christ never leaves us abandoned,” Father Sosa said.

“Death cannot define our lives. For those who believe, death is a transformation. That comes from knowing Jesus, from loving Jesus, a companion for Christians in our daily lives from baptism to natural or tragic death,” he added.

Marcus “Marc” Guara, 52, along with his wife, Anaely “Ana” Rodriguez, 42, and the couple’s two daughters, perished in the June 24 collapse of the condo building. Marcus’ body was pulled from the rubble June 26, and the bodies of his wife and daughters were found June 30.

As of late July 8, the death toll had risen to 60, and the search and rescue operation officially shifted to a recovery mission. Officials said 80 people were still unaccounted for.

Lucia and Emma were laid to rest in the same white casket, which was adorned with pink and purple ribbons. Inside the church, their casket was placed between the caskets holding the bodies of their mother and father.

“In (today’s) Gospel, we hear that Jesus doesn’t want to leave anyone alone or anyone lost. … He’s praying to the Father about that, he’s praying about his own disciples but he’s also praying about you and me. Death does not define us,” Father Sosa said in his homily, alternating between English and Spanish.

Addressing the Guaras’ relatives and friends in the congregation, the priest said: “God gifted them with many gifts that you can identify better than I can because you knew them every well. God continues to bring us gifts. Let us not refuse them.”

He said one lesson the Guaras and others who have lost their lives in the tragic building collapse can impart is “that family life is worth more than anything we hold dear to us.”

“God is dear to us and he knows us in our humanity,” Father Sosa said, “but at the same time he transforms us by the power of the Spirit to become better each day, to grow out of our own weakness and to be enriched by his own presence.”

Gesturing toward the caskets, he added, “They now inspire us to lead family life in that context more than ever before. They and all the ones they haven’t found yet — (15) members of our parish who are still missing.”

“Marcus, Anaely, Lucia and Emma, may the Lord grant you peace always and from the communion of saints may you intercede for us to continue our long journey to the heavenly kingdom,” Father Sosa said.

Throughout the funeral Mass, Guara family members and friends wiped away tears and clung to each other, “during the singing of ‘Amazing Grace’ as the caskets were being carried out of the church at the end,” The Associated Press reported.

As the search and rescue effort changed to a recovery operation,  the search teams paused their work around 1:20 a.m. July 8, and standing at the edge of the rubble, they bowed their heads in silence to honor the victims, said Miami-Dade County Mayor Daniella Levine Cava.

She told reporters the recovery effort was “proceeding just as rapidly with just as many people on the (rubble) pile,” and authorities were “taking as much care as ever” to find victims.

“We are working around the clock to recover victims and to bring closure to the families as fast as we possibly can,” she said.

Surfside Mayor Charles Burkett said local officials still hoped for the best. “We are still praying for a miracle. We haven’t given up all hope.” 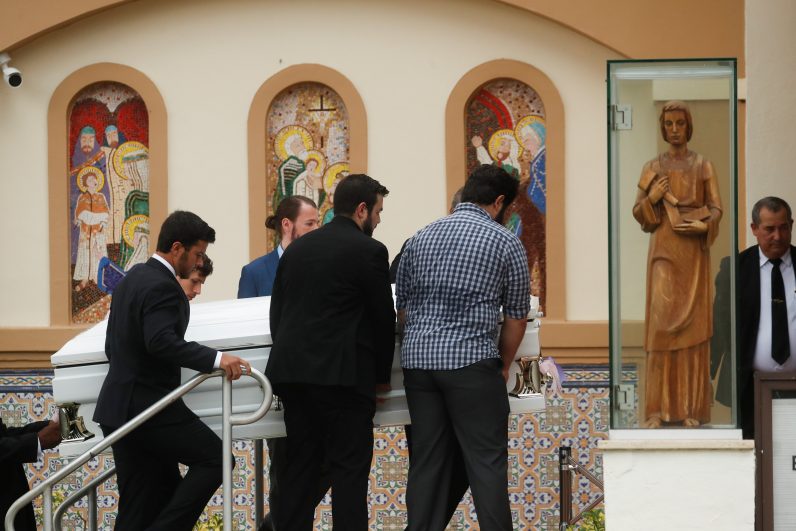 Pall bearers carry the casket of a Guara family member during a funeral Mass at St. Joseph Catholic Church in Surfside Fla., July 6, 2021. Marcus “Marc” Guara, his wife, Anaely “Ana” Rodriguez, and their daughters Lucia, 11, and Emma, 4, perished in the June 24 collapse of a Surfside condominium building not far from the Catholic church. Marcus Guara’s body was found June 26 and the bodies of his wife and daughters were found June 30. (CNS photo/Shannon Stapleton, Reuters)

NEXT: N.J. cardinal asks Catholics to sign petition to Congress on Hyde Amendment