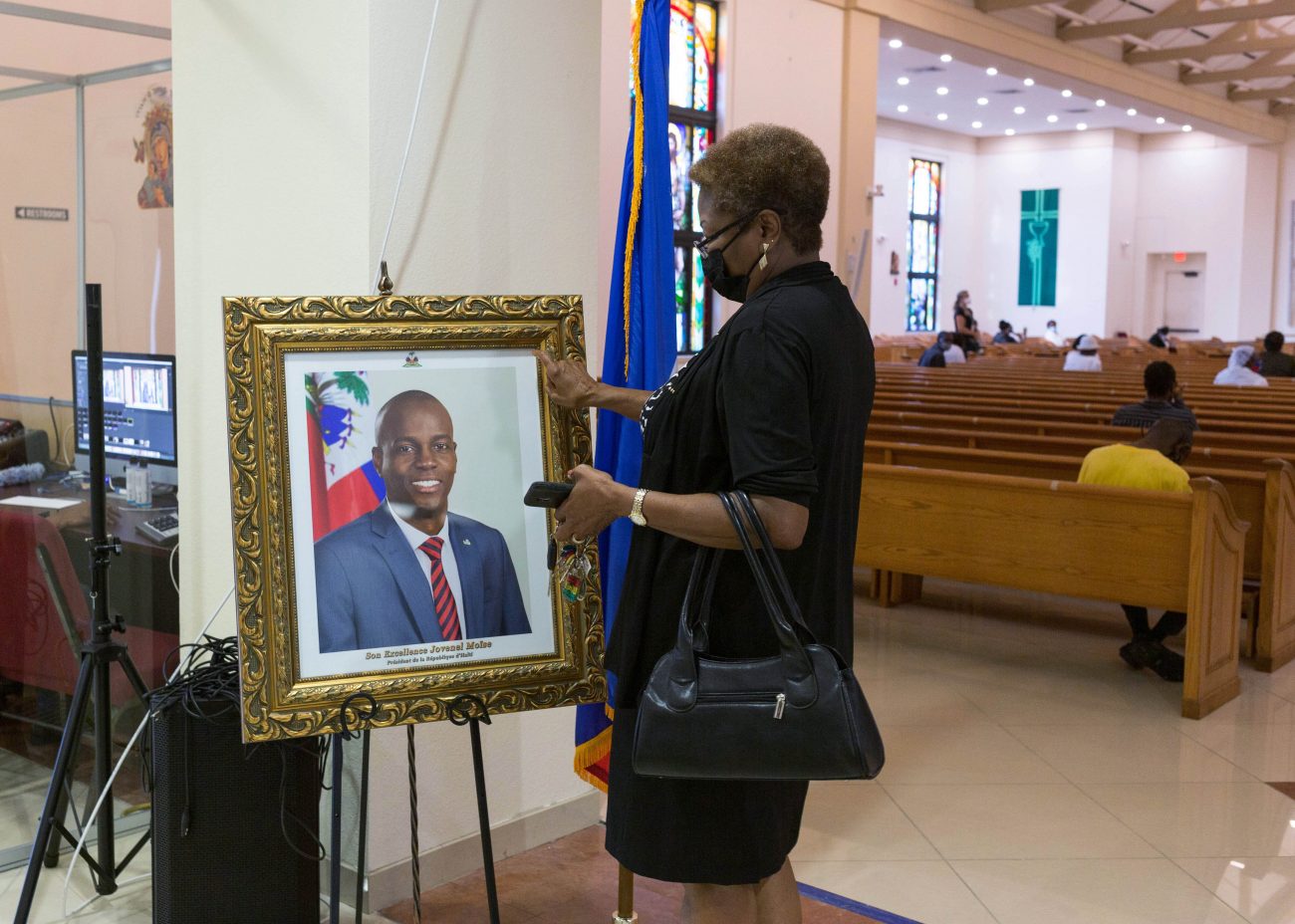 A woman stands by a portrait of late Haitian President Jovenel Moïse to pay her respects during a memorial service June 22, 2021, at Notre Dame d'Haiti Catholic Church in Miami. Moïse was assassinated July 7 at his residence in Petionville, Haiti. (CNS photo/Tom Tracy, Florida Catholic)

MIAMI (CNS) — Whatever their political leanings may have been, members of South Florida’s Haitian-American community were left saddened by the inexplicable and as yet unsolved assassination of Haiti’s president, Jovenel Moïse, who was gunned down in the bedroom of his residence early July 7.

They turned out July 22 at Notre Dame d’Haiti Church for a memorial Mass the evening before the late president received his state funeral. He was laid to rest July 23 by his wife and three children in their hometown of Cap-Haitien, in the north of the island nation.

Edner Saint-Jean, a resident of Broward County and an employee of the city of Lauderdale-By-The-Sea, stood in the back of the church near a framed picture of the former president, and considered the situation facing his country of birth.

“This is important for all Haitians to pay their respects to the president of Haiti; this is a very sad moment for all of Haiti and friends of Haiti,” Saint-Jean told the Florida Catholic, newspaper of the Miami Archdiocese. “It is a time for Haiti to come together and go forward with a new Haiti and new Haitian culture.

Directly, I did not have any experiences with (Moïse), but I followed him and thought he was a president with a good vision. I liked some things he did and did not like others, but this situation is a very tragic moment, very sad.”

Church members arriving at the memorial Mass signed a guest book as they entered the church; others passed by to touch his portrait or gaze in its direction for a few seconds before finding a seat.

Father Youry Jules, parochial vicar at Notre Dame d’Haiti, led prayers for peace in Haiti and delivered the homily, calling for unity and peace in Haiti. On hand were a number of community leaders including Miami-Dade County Mayor Daniella Levine Cava, who has been busy helping lead the disaster response to the Surfside building collapse.

In Haiti, media reports said pallbearers in military attire carried Moïse’s body in a closed wooden coffin two weeks after he was gunned down — and his wife, Martine, was wounded — in an assassination still shrouded in mystery. The Miami Herald reported that gunfire broke out during the funeral and said the country of Haiti “remains in a state of turmoil.”

According to CNN, dozens of men arrested by local police remain in detention “facing no formal charges and with limited access to attorneys.” Most of the men are Colombians. A Haitian-American doctor named Christian Emmanuel Sanon, 63, also was arrested for allegedly orchestrating the assassination.

On July 22 the U.S. announced a special envoy to help coordinate U.S. assistance and promote peace in Haiti. Daniel Foote, a career member of the Senior Foreign Service, was appointed to the role by the State Department.

In Miami, Notre Dame d’Haiti Church’s administrator, Father Reginal Jean-Mary, greeted guests before the start of the memorial Mass and talked to the media about the situation.

Father Jean-Mary said he had met Moïse on a number of occasions while in Haiti and had spoken briefly by telephone with his wife, Martine, after she was flown to a South Florida hospital to be treated for her injuries.

He said that Moise was not only a president but also a father, a husband and a citizen of Haiti who deserved better than to have his life cut short.

“Today the county is mourning: We lost a president, but not only a president but so many people have died. He reminds us of the many lives that have been lost in Haiti,” Father Jean-Mary said.

“This is not fair that we continue to lose so many people in our country. We pray that the cycle of violence stops. Too much blood has been shed,” he noted, adding, “we hope the international community will help us make a good transition” so the Haitian people can live “in a free, peaceful land where all of us can live as brothers and sisters.”

“We believe a new Haiti is possible, it can happen, it will happen. All we need to do is some soul searching, put our heads together, forgive one another and transcend the past,” the priest said.

“He was our boy, he was a Haitian, he was a father like many fathers, he was a son of Haiti, he was our leader and the way in which he died was a scandal and an injustice,” Father Jean-Mary added.

PREVIOUS: A month after Surfside collapse, many have questions about what comes next

NEXT: No ‘devout Catholic’ can condone killing child in the womb, says archbishop