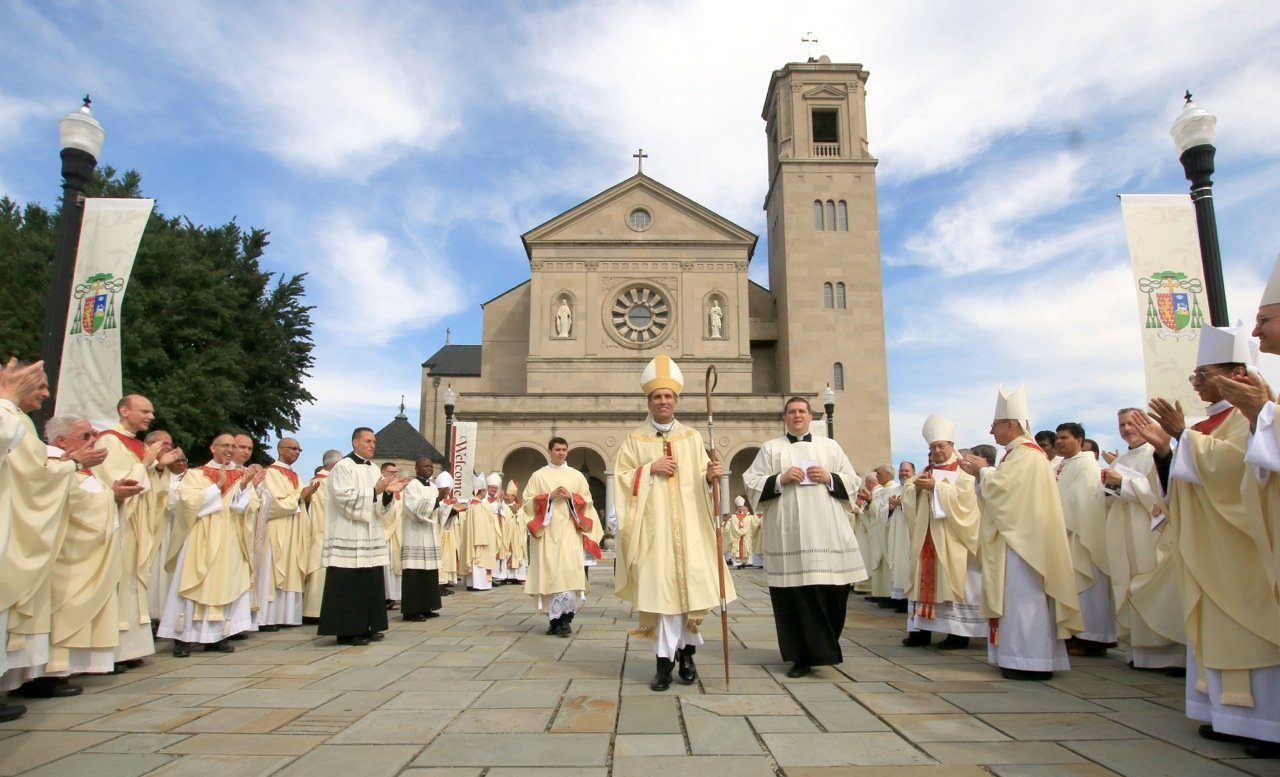 Bishop William E. Koenig is seen after his episcopal ordination and installation as bishop of the Diocese of Wilmington, Del., at St. Elizabeth Church in Wilmington July 13, 2021. (CNS photo/Donald Blake)

WILMINGTON, Del. (CNS) — Braving extreme heat and crushing humidity, more than 900 people crowded into St. Elizabeth Church in Wilmington July 13 to witness the ordination and installation of the new shepherd of the Diocese of Wilmington, Bishop William E. Koenig.

The episcopal ordination — the first in the diocese since 1897 — attracted not only the faithful of the diocese to its biggest church, but also a large number of the U.S. church hierarchy.

Some 30 bishops and archbishops were on hand, as well as Cardinals Wilton D. Gregory of Washington and Timothy M. Dolan of New York.

They were joined by nearly all the priests, permanent deacons and seminarians of the diocese, as well as representatives of the various diocesan ministries and schools.

Archbishop William E. Lori of Baltimore was the principal consecrator and main celebrant for the first part of the Mass. He was joined by Bishop John O. Barres of Rockville Centre, New York, and now-retired Bishop W. Francis Malooly of Wilmington as co-consecrators.

Bishop Barres, who was ordained to the priesthood for the Diocese of Wilmington in 1989 and served the diocese for 19 years, was Bishop Koenig’s bishop in Rockville Centre, where the new bishop was ordained a priest.

Taking his place in the ambo, Archbishop Christophe Pierre, papal nuncio to the United States, thanked Bishop Malooly for his 13 years leading the diocese, and the church filled with applause that turned into a standing ovation. Pope Francis accepted the 77-year-old bishop’s resignation and named his successor April 30.

“Today a new era begins for this beautiful diocese,” the archbishop said.

Addressing the soon-to-be-ordained Bishop Koenig, Archbishop Pierre thanked him for his years of outstanding service as a priest in the Diocese of Rockville Centre and said the hope of the church is that through his leadership, the people of Delaware and the Eastern Shore of Maryland will have a taste of eternity and experience God.

In his remarks, Archbishop Lori thanked Bishop Malooly for his 13 years as Wilmington’s bishop, calling him “a good friend” and “a good shepherd.”

He also thanked Bishop Barres for sharing a priest of his diocese with the Wilmington Diocese. At the time of his appointment, then-Msgr. Koenig was Rockville Centre’s vicar for clergy.

Archbishop Lori reflected on the Scripture readings Bishop Koenig selected for the Mass. Jesus was anointed by the spirit to fulfill the mission his Father had chosen for him. A glance of the Gospels shows how Jesus went about healing people and freeing them from slavery, then pouring his life out on the cross “in utter, self-giving love.”

St. Paul showed how Jesus’ words and actions will be incarnate in Bishop Koenig in his work leading the diocese.

From his work as a cathedral rector and as vicar for priests, Archbishop Lori said, Bishop Koenig knows “how easy it is to become absorbed in the heavy demands of church administration. But the foundation of your episcopal ministry, as you know, is in evangelizing catechesis.”

That comes from listening to and absorbing the word of God, the archbishop continued, but also listening to the needs and aspirations of the people he serves. That involves engaging them personally in a dialogue of charity, conversion, truth and salvation.

“This dialogue of love embraces, with missionary zeal, the unchurched and the searching, and even those who have hardened their hearts against Christ and against this church,” Archbishop Lori said.

The consecration with oil and the laying on of hands send Bishop Koenig forth with the Spirit to proclaim the truth that is Christ. It is easy to rely on natural gifts and talents, Archbishop Lori said, but it is the gift of the Spirit that transforms him.

“And it is his power that will sustain you in good days and bad, in sickness and in health, enabling you to love and cherish the church you serve as a bridegroom loves his bride,” he said.

People are not looking to their bishops “for wizardry or for showmanship,” but rather for constancy and fidelity. They should lead more by example than by decree, he said. Imitate the Good Shepherd, he continued, to be able to say with St. Paul, “Be imitators of me.”

At the end of the day, always let the voice of the Good Shepherd resonate in your heart, Archbishop Lori advised. The hearts and prayers of his bishop and priest friends, as well as those of those he will serve, are with him.

“May God bless you and keep you always in his love,” the archbishop concluded.

Bishop Koenig then promised to fulfill the duties of his office, and he lay prostrate as the congregation prayed a lengthy litany of the saints. The bishops then laid their hands on his head.

He also received the Book of the Gospels, his ring, miter and crozier. The ring and miter were carried into the church by priest friends from New York, Msgr. Thomas Harold and Father Joe Whelan, respectively.

Dramatic music emanated from the choir loft as Bishop Koenig walked to the presider’s chair, and the congregation rose with applause. The priests of the diocese, along with others from New York, offered the sign of peace, as did members of various diocesan ministries and members of his family. He was anointed with chrism oil.

Bishop Koenig then became the principal celebrant for the balance of the Mass, which lasted more than two and a half hours.

After Communion, Bishop Koenig and the consecrating bishops walked around St. Elizabeth to bless the congregation.

He climbed the steps of the ambo to offer a few comments, which included thanks to the many people who helped him on his journey to Wilmington. Among those he thanked were Pope Francis, the consecrating bishops, his fellow priests, friends and family members, many of whom made the trip to Delaware.

“It is always good to know you are only a phone call away,” he told friends from Rockville Centre. “Please don’t change your phone number.”

He mentioned his parents, Alfred and Mary, who are deceased, but “I know that they are looking down on me today with their supportive and prayerful love.”

One way of understanding a diocese is through demographics, Bishop Koenig said. But there is more to a place than numbers, he said. He has come to know the Wilmington Diocese is a place of faith, hope and love, and through the stories of why a parish was founded or a missionary order came here.

“I am humbled by and grateful for the call to join you as we together continue to form this spiritual house,” he said.

He looks forward to what can be done in the Diocese of Wilmington and to working and praying with the priests of the diocese. He asked for patience as he learns his way around the diocese.

Bishop Koenig said he is conscious of the variety of gifts of the people of the diocese and is eager to see what they can do together. They have a common mission: “to be messengers of God’s love for all, to bring the light of Christ to others, to preach the good news in word and deed, and it is toward this that I most eagerly look.”

Hundreds of people watched the Mass live on YouTube, with the number at one point exceeding 900. Messages of congratulations in the comments section came from around the diocese and the world. 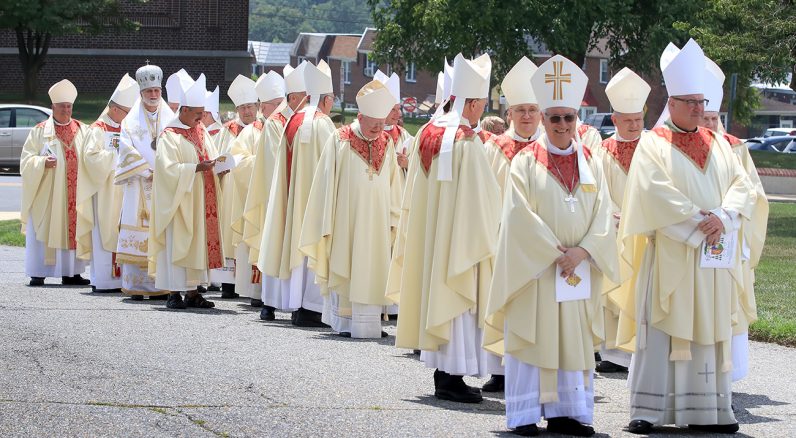 Bishops prepare to enter St. Elizabeth Church in Wilmington before the July 13 ordination of Bishop William Koenig as bishop of the Wilmington Diocese. Among the bishops is Archbishop Nelson Perez (far left) and Ukrainian Metropolitan Archbishop Borys Gudziak (second from left). (Photo by Don Blake)

NEXT: Lifting dispensation is not enough to get Catholics back to in-person Mass