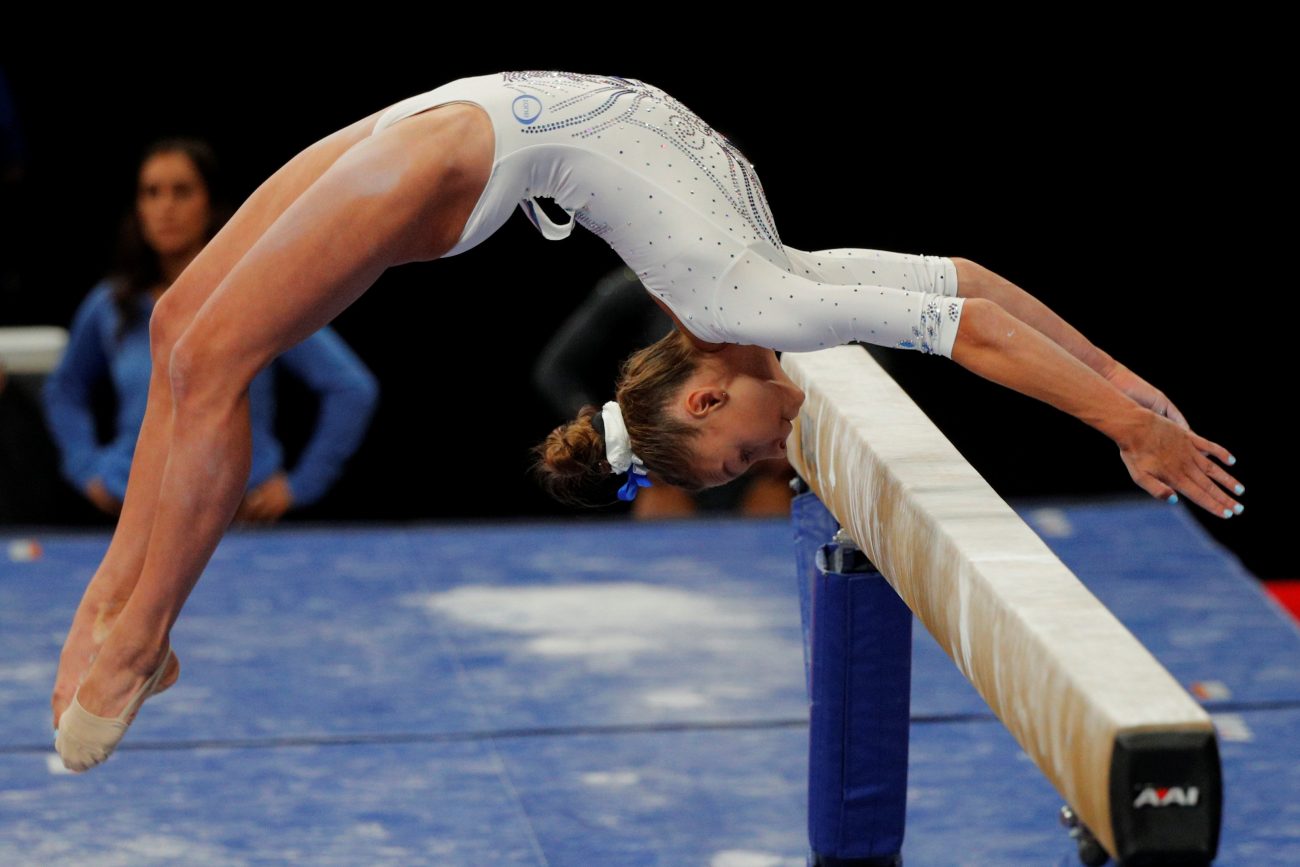 CHAMPLIN, Minn. (CNS) — The Twin City Twisters in Champlin is the home gym of Grace McCallum, a member of the 2018 World Championship U.S. gymnastics team.

A large banner hangs over the facility’s main entrance honoring that accomplishment. But her supporters are hoping the gym will soon need a new banner that reads, “Home of Grace McCallum, 2020 Olympic Gold Medalist.”

McCallum was selected at the conclusion of the U.S. Olympic Trials in St. Louis June 27 to be part of the U.S. women’s gymnastics team heading to the Tokyo Summer Games, which start July 23.

That’s a lot of pressure for the 18-year-old from Isanti who is a member of St. Elizabeth Ann Seton Parish. But she’s taking it in stride.

“I’m super excited,” McCallum said. “I feel so blessed that I’ve been given this opportunity to go represent our country at the biggest meet in the world.”

The experience has been a little surreal, and she is still caught up in the whirlwind of being chosen for the team, she told The Central Minnesota Catholic, the magazine of the Diocese of St. Cloud, Minnesota.

“I just try not to think about it too much, I’m going to go into the meet and just have fun,” McCallum said. “I mean, I got there; now I’m just going to enjoy it, enjoy every moment. So, I try not to let the pressure of it being the biggest meet get to me.”

She was confident, but still not positive she would make the team going into the trials.

“I knew it was going to be really, really tight between me, MyKayla (Skinner from Arizona), and Kayla (DiCello from Maryland),” she said. “It was basically whoever hit that day. I felt a little bit of pressure, but then I (thought), ‘I’m just going to have fun today and just do what I do. Whatever God wants for me, he’ll make it happen.’ I just had to kind of trust everything.”

Her team at the gym is excited to watch her compete in Tokyo.

“I have such a great support system here. They’re all super happy and excited,” she said. “I really lucked out with the amazing team that I have.”

In addition to her team at the gym, McCallum’s family will be watching her compete on television. Due to COVID-19 restrictions in place for the Games, no family members are allowed to attend.

“It will be an adjustment, but you know, it’s OK,” she said. “It’s a once-in-a-lifetime experience, so you’re going to do whatever you can and you’re going to follow all the rules.”

Her mom, Sandy, who has only missed one or two of her daughter’s gymnastics meets, had planned before the pandemic to travel to Tokyo.

“I’m kind of heartbroken about that and I know she is too, but it’s OK,” McCallum said. “She’ll be cheering me on from home. It would be nice to have her in the stands so I could see her up there.”

Japan announced July 8 that the Olympics will proceed under a state of emergency and without any spectators at events in Tokyo due to concerns about the coronavirus. The protocols put in place for the athletes are very strict, too, McCallum said.

Members of the team will be tested before they leave the U.S. July 14, as well as when they arrive in Tokyo. Their temperatures will be monitored and activity limited, she said.

“I think this is a great team. We all work together really well and get along super well,” she said. “That’s going to be important because we’re stuck in our rooms when we’re in Tokyo. We go from the hotel to the training facility and that’s it. We’re not even allowed off the floor in the hotel.”

The pandemic has presented many other challenges, including keeping in shape to be ready for the rescheduled Games.

“It’s been hard having this whole last year all over the place,” she said. “But our gym did an amazing job with keeping us in shape. We did lots of at-home workouts … so it wasn’t super hard when we came back.”

McCallum, disappointed the Olympics were postponed last year, said she had to trust her in faith and God’s timing. She planned to compete in 2020 and then take a year off to let her body recover before heading to college at the University of Utah.

Now she’ll head there in the fall without that recovery year, but she is still excited for the school year to start.

She looked at the university because of its gymnastics program — teammate MyKayla Skinner is an alum — but she also was impressed by the medical program. And she felt at home there, she said.

“I knew I wanted to go in the medical field somewhere because I feel, as a gymnast, you already know so much about your body,” McCallum said. “I would love to be able to help other athletes because I know what they’re going through. I know their pains, and so I think it would be really cool to help them in any way I can.”

There have been other challenges, too. In November her uncle, John McCallum, who was diagnosed with ALS several years ago, died.

“That was really, really hard on our family. It took a while to process because he was such a big part of our lives,” McCallum said. “But I just tell myself I’m going to live like John. He lived life to its fullest. And he really, especially in those last couple of months, relied on God.”

And then in January she broke her left hand and required surgery to put in a plate and seven screws.

“I thought my Olympic dreams were down the drain, but then I thought, ‘No, you know what? Everything happens for a reason.’ I just have to trust God on this one and that he’s looking out for me.”

She is now fully recovered and ready to take on whatever comes her way. “I’m all good. All healed up and ready to go,” she said.

During the pandemic, McCallum and her family watched their parish’s livestreamed Mass. Now that parishioners are back in the pews, McCallum said she hopes they continue with the livestream so she can connect with her home parish while she’s in Tokyo and into the future.

When she travels with the team and can’t attend Mass, she keeps her faith close in other ways. She has a rosary in her backpack as well as a special cross from her grandmother.

“She travels with those things to kind of bring her peace and calm,” her mom told The Central Minnesota Catholic in a 2019 interview. “Grace won’t travel anywhere without them.”

Towalski is a multimedia reporter at The Central Minnesota Catholic, the magazine of the Diocese of St. Cloud.

NEXT: Abuse allegation against retired Buffalo auxiliary under investigation