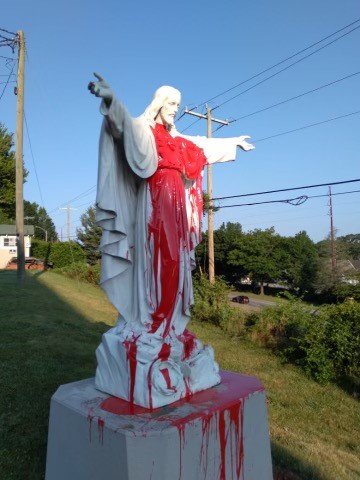 A statue of the Sacred Heart of Jesus outside St. Lawrence Basilica in Asheville, N.C., is seen July 4, 2021, after vandals defaced it with gallons of oil-based red paint. (CNS photo/Patricia L. Guilfoyle, Catholic News Herald)

ASHEVILLE, N.C. (CNS) — Vandals defaced the long-revered statue of the Sacred Heart of Jesus outside St. Lawrence Basilica over the July 3-4 weekend, but it was quickly restored by parish staff.

Arriving for Sunday Mass around 8 a.m. July 4, staff discovered the 7-foot statue of Jesus was covered in gallons of oil-based red paint. The damage occurred sometime after the vigil Mass July 3.

Bud Hansbury, the parish property manager, used graffiti remover and then repainted the statue of Jesus from the neck down, restoring its beauty before the noon Mass July 4.

The statue, which has greeted westbound motorists on Interstate 240 for decades, features Jesus with his arms outstretched and the image of a heart upon his chest, representing Christ’s love for all of humanity. It stands 10 feet tall including the base.

Father Roger Arnsparger, pastor, spoke to parishioners July 4 about the incident, asking them to pray for peace and respect for everyone.

The parish reported the incident to the Asheville Police Department. 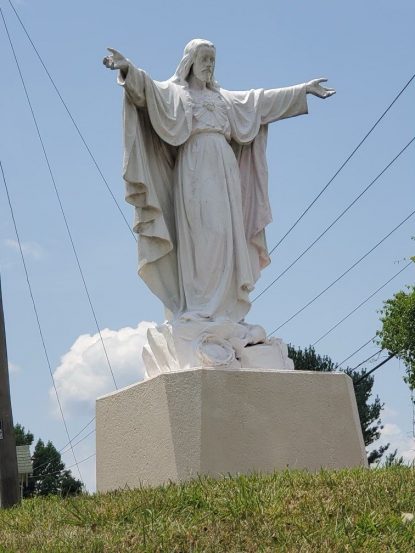 A statue of the Sacred Heart of Jesus outside St. Lawrence Basilica in Asheville, N.C., is seen cleaned and restored July 4, 2021, after vandals defaced it with gallons of oil-based red paint. (CNS photo/Patricia L. Guilfoyle, Catholic News Herald)

“We are praying for those who did this, and we are endlessly grateful for the support of our community,” Father Arnsparger told the Catholic News Herald, newspaper of the Diocese of Charlotte, North Carolina.

St. Lawrence Basilica, in downtown Asheville, is among the oldest Catholic churches in North Carolina. Listed on the National Register of Historic Places, it was completed in 1909 and features one of the largest free-standing elliptical domes in North America.

In the last year, a wave of vandalism around the U.S. has resulted in defaced and toppled statues of Mary, Jesus and saints, like St. Junípero Serra, outside churches and, in one or two cases, inside churches in protest of colonialism and white supremacy.

Other statues depicting Confederate leaders, Christopher Columbus, Francis Scott Key and other historical figures also have been attacked, including with red paint.

Currently, Canada has experienced its own wave of church vandalism as news has emerged of unmarked graves at former residential schools on First Nations lands. About 70% of the government schools were run by Catholic religious orders.

Ten churches in Calgary, Alberta, were set on fire and in some cases red paint was splattered on statues. The vandalism was discovered on Canada Day, July 1.

The Catholic News Herald is the newspaper of the Diocese of Charlotte.

NEXT: Supreme Court will take up religious schools case