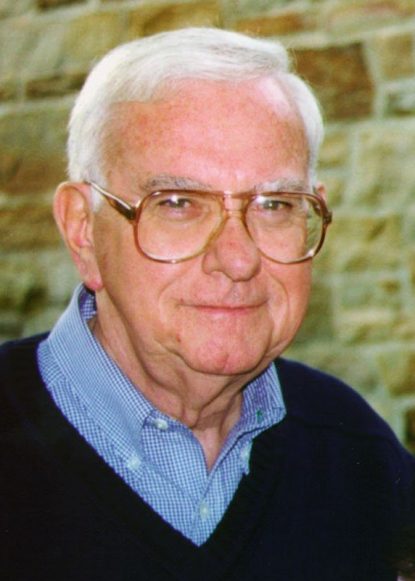 Gerald M. Costello is seen in this 1999 file photo. The Catholic press veteran who was a reporter, columnist, book author and founding editor of three newspapers died July 19, 2021, after a five-year struggle with Parkinson’s disease. He was 90. (CNS photo/courtesy Eileen Marx)

POMPTON PLAINS, N.J. (CNS) — Gerald “Jerry” Michael Costello, a Catholic press veteran who was a reporter, columnist, book author and founding editor of three newspapers, died July 19 after a five-year struggle with Parkinson’s disease. He was 90.

His funeral Mass will be celebrated July 23 at Holy Spirit Church in Pequannock, New Jersey, followed by burial at Our Lady of Magnificat Cemetery in Kinnelon, New Jersey.

His writing informed readers about international, national and local Catholic news for over 60 years.

“As the founding editor in chief, Jerry Costello put his personal stamp of excellence on Catholic New York’s weekly product from the beginning and made it a standard-bearer for the Catholic press,” said John Woods, the newspaper’s editor-in-chief. “He was often out front on the biggest stories of his era writing with a clear, concise and authoritative style all his own.”

Costello and the late Anne Buckley, who was a co-founder of Catholic New York and its editor-in-chief from 1991 to 2000, “formed the best one-two set of editors I have ever seen at one diocesan publication,” Woods added.

Msgr. Owen F. Campion, a former associate publisher of Our Sunday Visitor and a former editor of the Tennessee Register, newspaper of the Diocese of Nashville, said Costello’s passing “closes a lifetime of extraordinary service to the church.”

“As founding editor of Catholic New York, he created a diocesan newspaper that, from its first edition, took a place of excellence, in every sense, in American Catholic communications,” the priest said. “His colleagues recognized his talent and commitment as they awarded him both the esteemed St. Francis de Sales Award and Bishop England Award.”

Costello was the first layman to receive the Bishop John England Award as president and publisher of The Christophers in 2003 from the Catholic Press Association. In 2004 he received the St. Francis de Sales Award, the highest honor for distinguished achievement in the Catholic press given by the CPA, now called the Catholic Media Association.

Greg Erlandson, director and editor-in-chief, called Costello a “pillar of the Catholic press, an ever-willing mentor and a great piano player. His dedication to the church he served, his sense of humor and his commitment to excellence should be long remembered by all who follow in his footsteps.”

Costello was hired by the late Cardinal Terence Cooke in 1981 to begin the first official newspaper of the Archdiocese of New York, succeeding the privately owned Catholic News. Costello worked closely and traveled extensively with Cardinal John O’Connor, Cooke’s successor as archbishop of New York. After founding The Beacon, Costello served as its editor from 1966-1981.

Under Costello’s leadership, both Catholic newspapers won many journalistic awards and were widely recognized for their excellence in editing, writing and design. 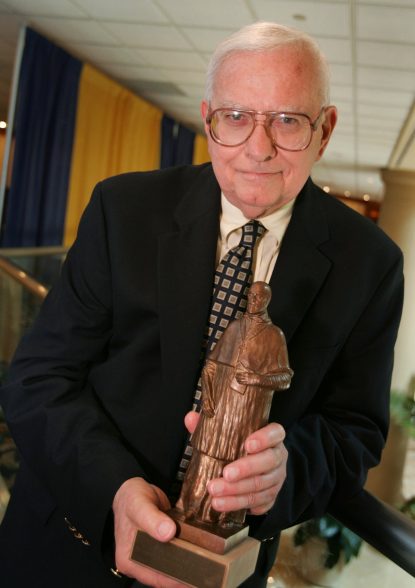 Retired Catholic journalist Gerald Costello displays the Catholic Press Association’s St. Francis de Sales Award May 28, 2004, at the association’s annual convention in Washington. The Catholic press veteran who was a reporter, columnist, book author and founding editor of three newspapers died July 19, 2021, after a five-year struggle with Parkinson’s disease. He was 90. (CNS photo by Nancy Wiechec)

Costello wrote two award-winning books: “Mission to Latin America: The Successes and Failures of a Twentieth Century Crusade” (1979), about North American priests, nuns, and lay missionaries who worked in Latin America in the 1960s; “Without Fear or Favor: George Higgins on the Record” (1984), a profile of Msgr. George Higgins, the late “labor priest.”

Costello’s reporting had a special focus on the church’s social teaching on issues such as poverty, war and racial and economic justice.

He believed journalists should be on the ground where the story was happening and talk directly to the people who were most affected, so he interviewed Cesar Chavez, founder of the United Farm Workers union, in his remote Tehachapi Mountain headquarters in California. He also talked to farmworkers.

The interviews were published in installments in The Beacon beginning in March 1973. The series brought Catholic readers firsthand accounts of the squalid living conditions and unfair pay for many farmworkers.

He traveled to Bolivia and Peru to report on the church’s missions to the poor in Latin America, and he visited Northern Ireland where he reported on the “troubles” between Catholics and Protestants. He reported from the Philippines, Cuba, El Salvador, Nicaragua, Ethiopia and Jerusalem, filing countless stories on the church’s work to address war, famine and political and religious strife.

As satisfying as Costello’s professional achievements, awards and honors were throughout his career, in 2011 he wrote in his self-published book “So Far, So Good:” “Any professional accomplishments take a back seat to raising a family with my wife, Jane. When I think of my legacy, I think of our six children, our (now 21) grandchildren, and our (now eight) great-grandchildren.”

Born May 17, 1931, in Utica, New York, he was the only child of Michael and Catherine Costello. Soon after his birth, the family moved to Hawthorne, New Jersey, where Jerry attended elementary and high school and formed lifelong friendships.

Beginning at age 7, Jerry took the bus from Hawthorne to Paterson for lessons on the alto saxophone, planting a seed that would become a life-long passion for music and joy in his life. In grammar school, Costello was a member of a marching band, a dance band and a youth orchestra.

In high school, Costello played with the school’s marching band and dance band orchestra. Along the way he learned to play the clarinet and the piano. (As a husband and father, he played jazz and show tunes on his baby grand piano after dinner most evenings and always at holidays and family gatherings.)

An elective course in music theory sparked his interest in orchestral arranging. He wrote dozens of arrangements for his high school and college dance orchestras and, at the end of the Big Band era, even became an arranger for legendary composer and bandleader Artie Shaw.

In 1952 he graduated from the University of Notre Dame, majoring in speech in preparation for a television career. He then enrolled at Fordham University for a master’s degree in communication arts. His goal to work in television, though, changed after a journalism professor conveyed such a love of the newspaper business to Costello that he headed down a new career path.

In 1953 he began his first job as a reporter for the Paterson Evening News. On the first day of work, he held the door open for another reporter entering the building who turned out to be his future wife, Jane Van Saun, a Syracuse University graduate.

Costello was drafted, serving from 1953-55 in the Army’s 532nd Military Intelligence Battalion in Stuttgart, Germany. He and Jane were married in December 1954 at Holy Spirit Church in Pequannock, New Jersey, during Costello’s three-week leave from the service. The newlyweds returned to Stuttgart in the New Year where they lived in a second-floor apartment in a country farmhouse.

After returning from the service, Costello went back to work as a reporter at the Paterson Evening News. In 1958, at age 27, he was offered the job of founding editor of the Suburban Trends. From 1962-64, Costello was the news editor for The Advocate, newspaper of the Archdiocese of Newark. In 1964, he became the assistant suburban editor of The Herald News in Passaic, New Jersey.

It was a Herald News assignment to interview Bishop Lawrence B. Casey of Paterson that led to the bishop inviting Costello in the fall of 1966 to be the founding editor of The Beacon.

After retiring from Catholic New York in 1991, Costello was president and administrator of The Christophers and also worked as a consultant for the Propagation of the Faith. He also was a consultant to the Catholic Standard, newspaper of the Archdiocese of Washington.

Costello also was the editor of Our Sunday Visitor’s “Treasury of Catholic Stories,” published in 1999, and in 2006 he edited an updated version of Father James Keller’s classic 1948 best-seller, “You Can Change the World.”

Among his many awards was an honorary doctorate from St. John’s University in New York (1997).

He is preceded in death by his oldest son Michael, age 61, who died in February of this year due to complications from COVID-19.