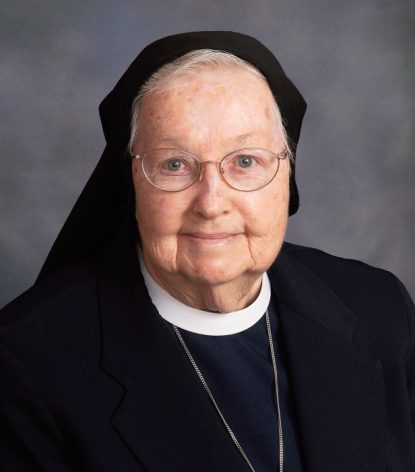 Sister Maria Francina Travis, I.H.M., died June 12 in Camilla Hall, Immaculata. She was 96 and in the 75th year of her religious life.

The former Bernice M. Travis was the daughter of Charles and Mary (Kirlin) Travis who raised their 10 children in St. Agnes Parish in West Chester, where Bernice attended the parish’s elementary and high school. She entered the Sisters, Servants of the Immaculate Heart of Mary in 1946 and received her habit and religious name, Sister Maria Francina. She pronounced her first vows two years later.

After teaching for 63 years Sister Francina entered Camilla Hall Convent Home in August 2011, where she continued to serve the Lord and her sisters as a faithful member of the Apostolate of Prayer until her death.

Sister Francina is predeceased by her parents and her brothers Harry, Edmond, Charles, Frank, Jack and her sisters Sue Schaunis, Mary McKenny, Margaret Murphy, and Sister Mary Imelda Travis, I.H.M. She is survived by many nieces, nephews, grandnieces and grandnephews.