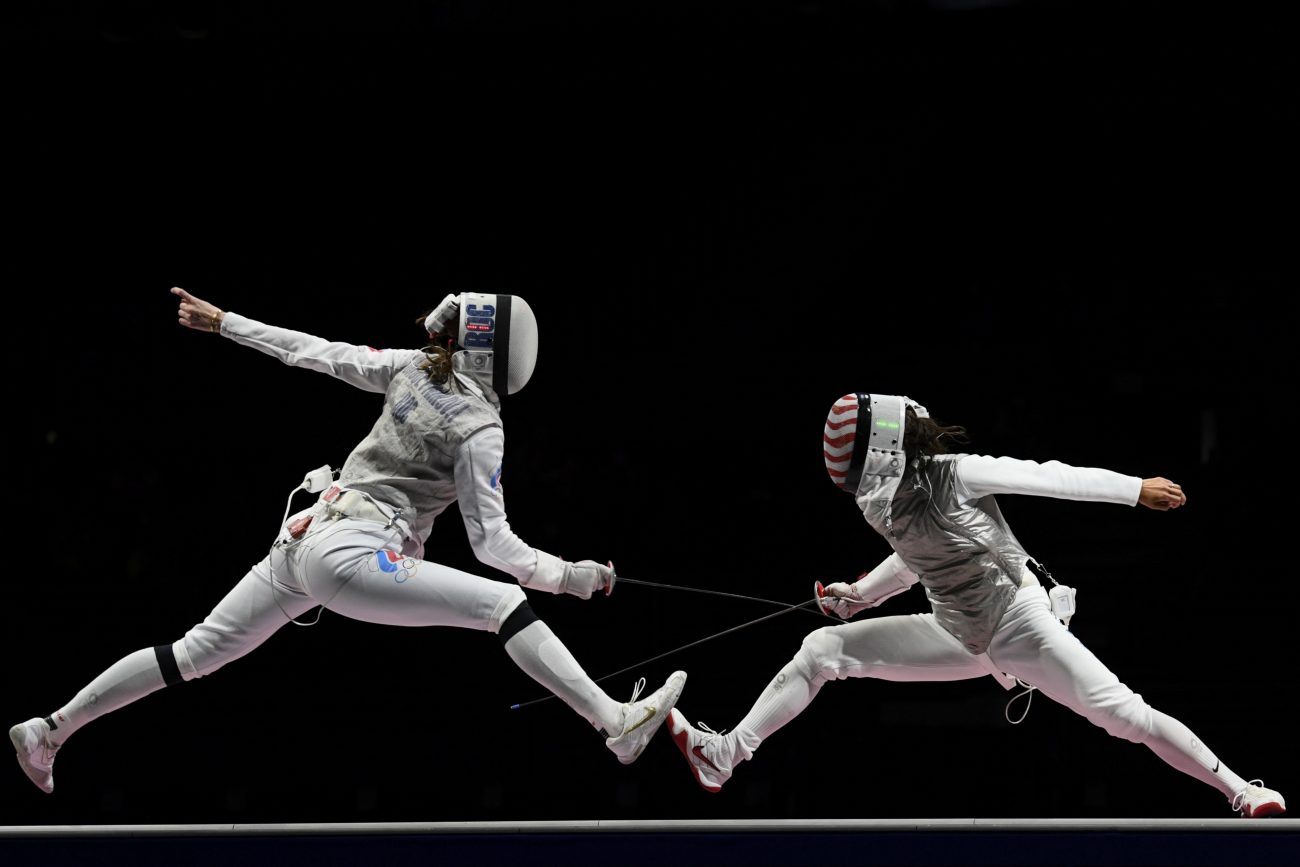 Lee Kiefer of the United States, right, competes against Larisa Korobeynikova of the Russian Olympic Committee in the semifinal of the 2020 Tokyo Olympics women's individual foil competition July 25, 2021. Kiefer went on the same day to win the gold medal by defeating defending champion Inna Deriglazova 15-13 in the final. (CNS photo/Annegret Hilse, Reuters)

TOKYO (CNS) — “Golden is thy fame, indeed,” the University of Notre Dame in Indiana tweeted July 25 after Lee Kiefer, class of 2017, won the gold medal in women’s foil fencing at the Tokyo Games.

She beat defending champion Inna Deriglazova of Russia 15-13. Kiefer, 27, is the first American, male or female, to win an individual Olympic medal in foil fencing.

“It’s such an incredible feeling that I share with my coach, I share with my husband, with my family, just everyone that’s been a part of this,” Kiefer was quoted as saying in an Indianapolis Star story. “I wish I could chop it (the medal) up in little pieces and distributed it to everyone I love.”

Now a medical student at the University of Kentucky College of Medicine, Kiefer was the fifth-ranked foilist in the world going into the Olympics.

Eight of the members of the USA Fencing team have a Notre Dame connection, including Mariel Zagunis, class of 2008, who was the first American to win a gold medal in Olympic fencing, in Athens in 2004.

She followed it up with another gold medal in women’s sabre in Beijing in 2008. She also took home bronze in the team event in 2008 and 2016.

In the women’s sabre individual table of 32 event July 26, Zagunis defeated Canadian Gabriella Page 15-3 and went on to face Ji-Yeon Kim from South Korea in the table of 16 event.

While at Notre Dame, Kiefer was a four-time NCAA foil champion and four-time First Team All-American. She earned a bronze medal in women’s foil at the 2011 World Fencing Championships.

Her husband, Gerek Meinhardt, won a team bronze in foil in 2016. In Tokyo, Meinhardt competed in the men’s individual foil table of 32 event July 25 against Russian Vladislav Mylnikov, who won 15-11.

According to The Indianapolis Star, Notre Dame established the Lee Kiefer/Gerek Meinhardt Award in 2018, honoring a fencer who gives “time selflessly and humbly in training.”

According to a bio on Kiefer posted on the website of the International Fencing Federation, the gold medalist followed her father, Steve, into fencing, as did her sister and brother, Alexandra and Axel. Lee was 5 years old when she started in the sport.

“Growing up my dad decided that he wanted to take up fencing again. He hadn’t picked up a foil in 10 or 15 years, and me and my siblings watched him compete at a local tournament,” Kiefer said in an interview a couple of years ago. “Then he asked if we wanted to try it, and we said yes. Twenty years later I’m still doing it.”

Both of Kiefer’s parents are doctors. Her mother, Teresa, emigrated from the Philippines to the United States of America as a child, according to the federation’s bio. Her father was captain of the fencing team at Duke University. Her siblings also have represented the U.S. in fencing.

“Fencing and medicine is all I have ever known since I was born,” Lee Kiefer told the federation, known by the acronym FIE for its initials in French. “Before my sister went to college, we all went to every single practice together. It wasn’t only a lot of bonding time but we all made each other better through constant practice.

“All of us are very competitive, which meant there was a lot of fighting when we were younger. But it was a lot of fun, and now we have that experience together as adults.”