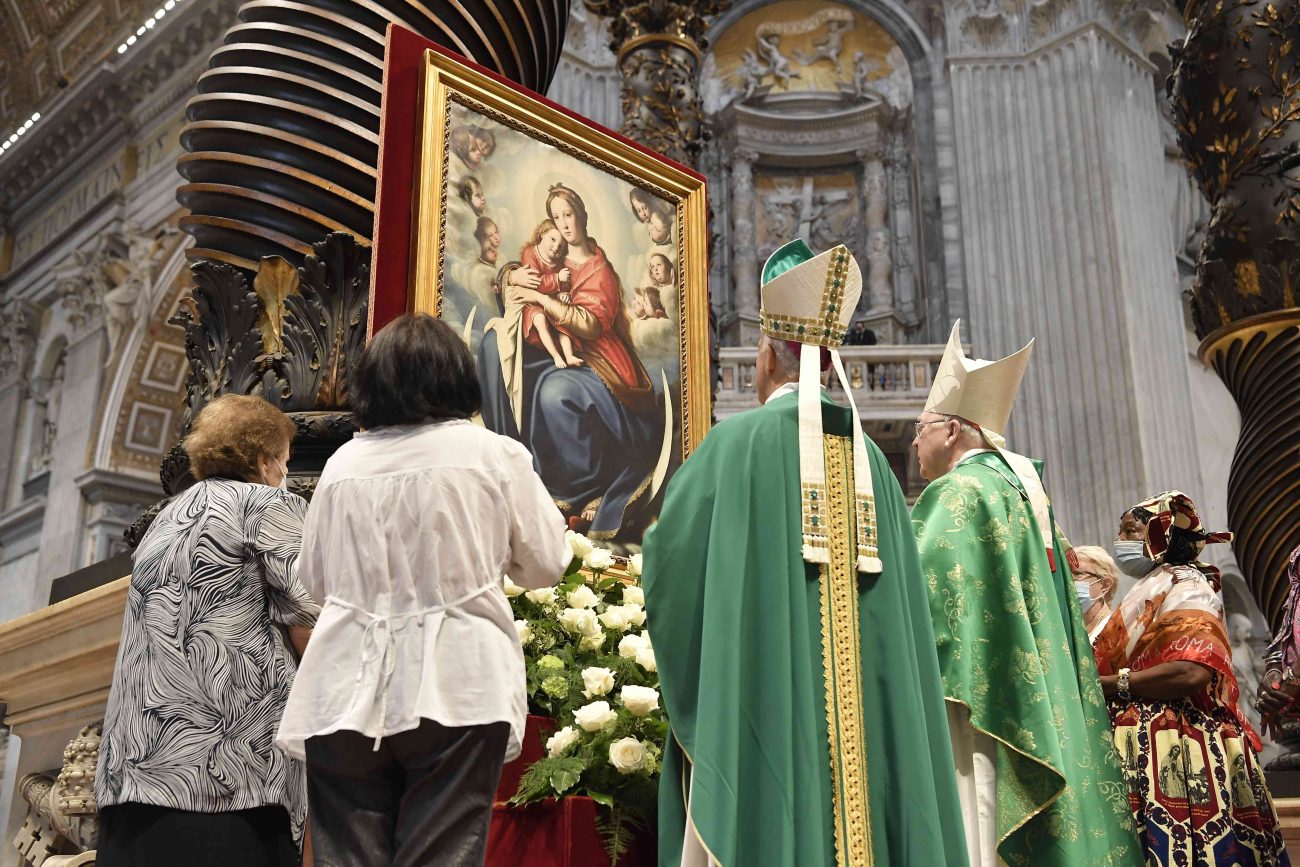 Archbishop Rino Fisichella, president of the Pontifical Council for Promoting New Evangelization, and Cardinal Kevin J. Farrell, prefect of the Dicastery for Laity, the Family and Life, pray before an image of Mary with some older members of the congregation at the end of Mass July 25, 2021, in St. Peter's Basilica at the Vatican. The Mass marked the first World Day for Grandparents and the Elderly. (CNS photo/Vatican Media)

VATICAN CITY (CNS) — Older people are not “leftovers” to be discarded; rather, they continue to be precious nourishment for families, young people and communities, Pope Francis said in the homily he wrote for the Mass marking the first World Day for Grandparents and the Elderly.

“Let us ask ourselves, ‘Have I visited my grandparents, my elderly relatives, the older people in my neighborhood? Have I listened to them? Have I spent time with them?'” the pope said in his homily, which was read aloud at the Mass by Archbishop Rino Fisichella.

“Let us protect them, so that nothing of their lives and dreams may be lost. May we never regret that we were insufficiently attentive to those who loved us and gave us life,” the homily said.

The Mass July 25 was celebrated in St. Peter’s Basilica with about 2,000 people in attendance, including multi-generational families, older people and their caregivers. Large-print Mass booklets also were available.

Pope Francis, who had colon surgery July 4, did not preside over the Mass as he was still undergoing “normal convalescence,” according to the Vatican press office.

The pope, however, did give his Angelus address and lead prayer at noon the same day.

Archbishop Fisichella, president of the Pontifical Council for Promoting New Evangelization, presided over the Mass, which he began by greeting the older people in attendance who, he said, had been understandably expecting to celebrate with Pope Francis.

But “we do not want him to tire himself so that he may spend these days resting to regain his strength and fully resume his pastoral ministry,” the archbishop said before reading the homily the pope prepared for the Mass.

“Grandparents and the elderly are not leftovers from life, scraps to be discarded,” the pope wrote. “They are a precious source of nourishment.”

“They protected us as we grew, and now it is up to us to protect their lives, to alleviate their difficulties, to attend to their needs and to ensure that they are helped in daily life and not feel alone,” he wrote.

The pope asked people to reconnect with older people, to visit or call and “listen to them and never discard them. Let us cherish them and spend time with them. We will be the better for it,” young and old alike, he wrote.

“I worry when I see a society full of people in constant motion, too caught up in their own affairs to have time for a glance, a greeting or a hug,” he wrote.

The notion of “every man for himself” is “deadly,” he wrote, and the Gospel asks people to share “what we are and what we possess” in order to find true and lasting fulfillment.

“Our grandparents, who nourished our own lives, now hunger for our attention and our love; they long for our closeness. Let us lift up our eyes and see them, even as Jesus sees us,” the pope wrote.

During the intercessions, prayers were offered for those who died during the pandemic, especially the elderly, and for the faithful to learn to cherish and serve the elderly.

At the end of the Mass, Archbishop Fisichella and Cardinal Kevin J. Farrell, prefect of the Dicastery for Laity, the Family and Life, which was promoting the world day, blessed baskets of bright yellow, red and orange flowers, that were then distributed with the pope’s message by young people to the older people attending the Mass.

The pope appeared at the window of his studio in the apostolic palace to greet and bless those gathered in St. Peter’s Square and to deliver his address before praying the Angelus.

He invited everyone to visit the elderly and to give them a copy of this year’s world day message. Young and old must spend time together, talking and sharing their memories, hopes and dreams, he said.

Commenting on the day’s Gospel reading of the multiplication of the loaves, the pope recalled the generous gift of the boy who gave what little he had, which was enough for Jesus, who used that small gift to feed thousands.

But, the pope said, think about the event from the point of view of the young boy: taking his five barley loaves and two fish to feed others seems like an “unreasonable proposal. Why deprive a person, indeed a child, of what he has brought from home and has the right to keep for himself? Why take away from one person what is not enough to feed everyone anyway?”

It shows people must ask what they can bring to Jesus each day and reminds people that “the Lord can do a lot with the little that we put at his disposal,” the pope said.

Today’s mindset is marked by the quest to “accumulate and increase what we have, but Jesus asks us to give, to diminish. We like to add, we like addition; Jesus likes subtraction, taking something away to give it to others. We want to multiply for ourselves; Jesus appreciates it when we share with others, when we share,” he said.

The pope recalled that many problems in the world, particularly hunger, cannot be solved without “fair sharing.” It is estimated that about 7,000 children under the age of five die each day because of malnutrition, he added.

Facing such scandals, he said, people should, like the boy, accept Jesus’ invitation and “be brave, give what little you have, your talents and your possessions, make them available to Jesus and to your brothers and sisters. Do not be afraid, nothing will be lost, because if you share, God will multiply.”

NEXT: To feed the world, start with family farms, pope says