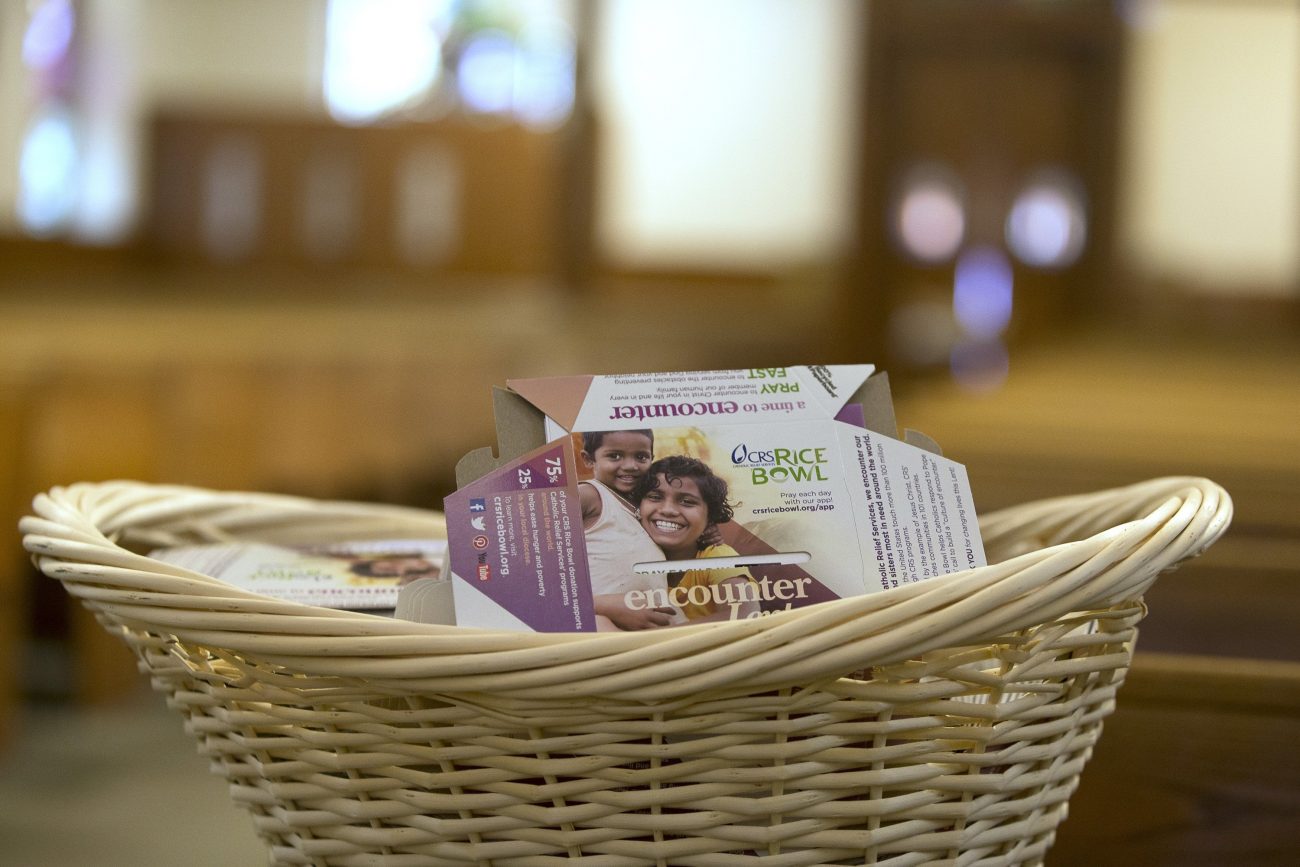 Envelopes for Catholic Relief Services Rice Bowl program are displayed in this illustration photo. CRS is the overseas relief and development agency of the U.S. bishops. (CNS photo/Octavio Duran)

Amid the second year of COVID, local donations to an annual humanitarian relief effort have rebounded by some 65%.

As of this week, parishes throughout the Philadelphia Archdiocese have contributed more than $354,000 to Catholic Relief Services’ (CRS) Rice Bowl initiative. The campaign, which kicks off each Lent, combines prayer, fasting and almsgiving to help those in need both in the U.S. and abroad.

With 2020’s collection adding up to just over $213,000, this year’s numbers — which represent about 90% of recent pre-pandemic totals — are “thrilling,” said archdiocesan CRS director Anne Ayella.

“People dug a little deeper,” she said. “I do think, as hard as it’s been, to some extent the pandemic has helped us to see we are so interconnected, and we are one global family.”

That perspective has defined Rice Bowl since its creation by now retired Allentown priest Msgr. Robert Coll, who developed the concept in response to reports of famine in sub-Saharan Africa during the early 1970s.

The change collected in the iconic cardboard Rice Bowl containers has added up considerably over the decades. Since its inception in 1975 and adoption a year later by the Catholic Church in the U.S., the program has raised more than $250 million.

(Watch a video of Andrise, a teacher in Haiti whose school is a beneficiary of the CRS Rice Bowl initiative.)

The remaining 25% (about $62.5 million to date) funds local efforts to alleviate hunger, such as those directed by archdiocesan Nutritional Development Services (NDS), which provides assistance to some 50 area food cupboards and soup kitchens in the five-county area.

Spiritual reflections and first-person stories of Rice Bowl beneficiaries round out the program, fostering encounters with the divine and with people from other cultures.

“Rice Bowl has always tied all the components together,” said Ayella. “It really isn’t a capital campaign and it’s not just a collection. It’s a prayer and faith formation opportunity. You’re learning and you’re giving so much more than a donation.”

Through videos, narratives and images, the program allows participants to see the faces and hear the voices of those who are helped, fostering lasting compassion and concern across the miles.

“She had told such a great story of how she wanted her kids to have a totally normal life, with access to education,” said Ayella. “You can picture a real, live person.”

Although the Rice Bowl campaign is a separate CRS initiative, Ayella is confident in the agency’s response to the earthquake in Haiti, where CRS has been active since 1954.

“Every time there has been a major problem, CRS can hit the ground running,” she said. “They have the infrastructure, and most of the staff are local people.”

In the Philadelphia area, the Rice Bowl effort is critical to stocking archdiocesan Nutritional Development Services (NDS) food pantries, which are seeing a “steady stream” of clients, said Ayella.

“They’re extremely busy, going through food relatively quickly,” she said. “This 25% from Rice Bowl will enable the NDS community food program to buy more canned and packed foods, and to supplement those with fresh produce and lean meats.”

Those items have become even more essential as parents ready their kids for the new school year, she noted.

“In all honesty, back to school time is a really stressful season for families,” she said. “The cost of getting kids ready with backpacks, supplies, new clothes and shoes really adds up, especially if kids have to now go back in person. If you’re on a tight budget, you might have to divert money from food to those expenses.”

Rather than just a seasonal effort, Rice Bowl is ultimately a continuous commitment to others, said Ayella, who is grateful for this year’s outpouring of support.

“When you see others as different, it’s easier to say, ‘I don’t have the money to give; someone else will do it,’” she said. “But when you have heard someone’s story and seen their face, it makes you want to give, because you say, ‘This is someone.’”

To learn more about CRS Rice Bowl and to donate, visit the Rice Bowl website.

NEXT: After brutal attack on husband, archdiocesan social worker calls for end to violence