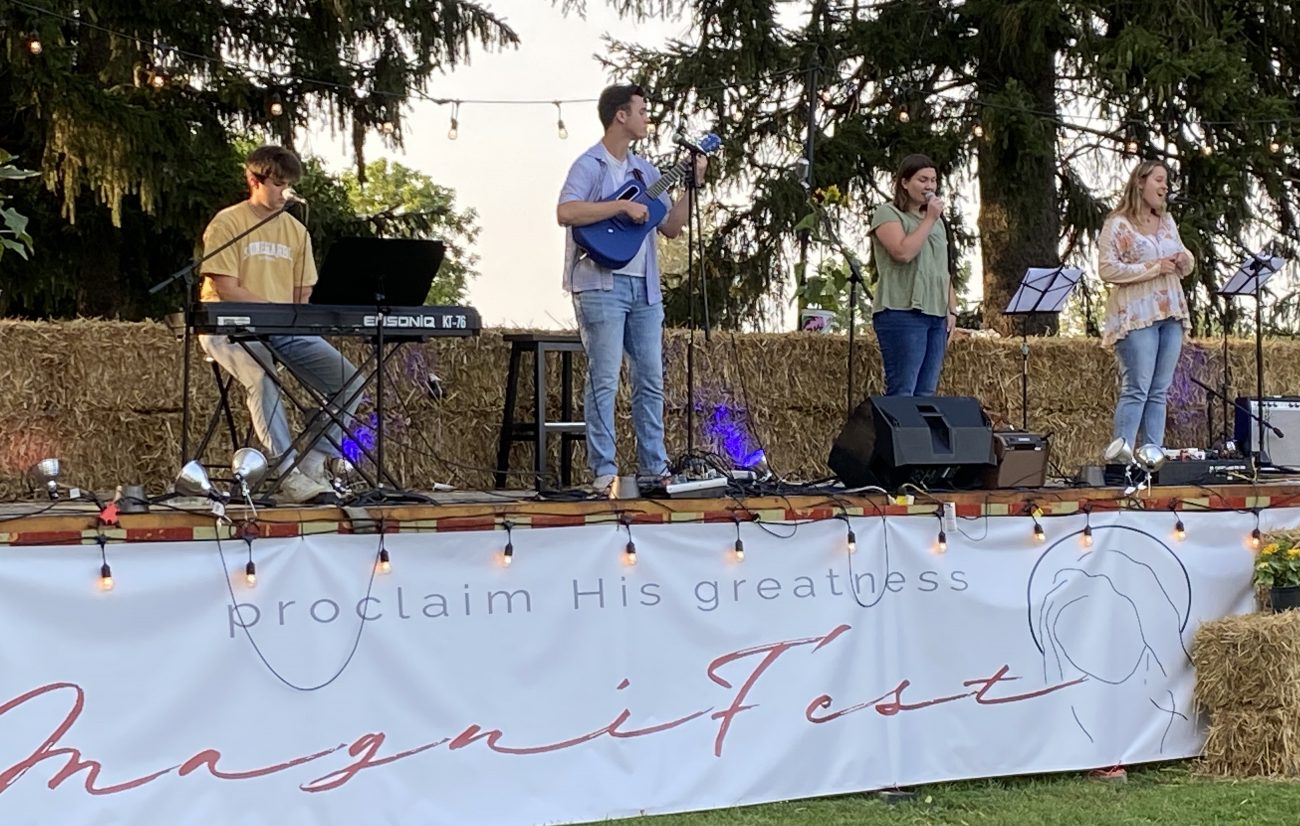 “This is a place where people can come every week to unplug and get in touch with God,” said Beth Riordan, a festival organizer for MagniFest, a three-night summer concert series that kicked off Saturday, July 31 at St. Mary of Providence Center in Elverson, northern Chester County.

The festival’s name stems from the Magnificat, which is Mary’s song of praise that proclaims the greatness of Lord (Lk 1:46). It was the suggestion of Sister Brenda McHugh, the center’s management director, for the title of the concert series when approached by Riordan earlier this year with the idea for the event.

More than 100 people attended the event on a temperate summer evening, sitting on blankets and beach chairs on St. Mary’s grassy field nearby a cornfield. The audience enjoyed heart-felt music and praise by local performers, and shopping with local artisans and vendors. A flatbed truck loaned by A. Duie Pyle, a local transportation company, served as a stage decorated with hay bales and sunflowers.

“We love hearing original music,” said Jeannine Peters of Devon, who attended with her husband, Michael, and daughters Belle, 17, and Rita, 13. “It’s a nice family event in a beautiful venue.”

The family are parishioners of St. Isaac Jogues Parish in Wayne and heard about the event from fellow parishioners. Peters said they enjoyed how performers shared both music and testimony of personal faith journeys. 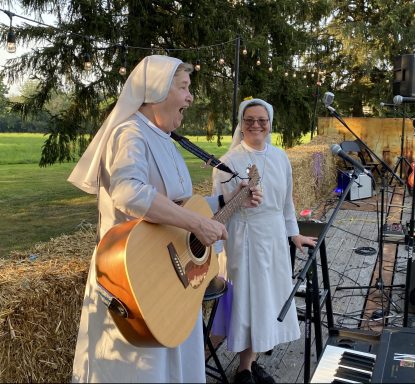 Sister Beth Ann Dillion (left) and Sister Brenda McHugh, Daughters of St. Mary of Providence, warmed up the audience with a song Saturday evening, July 31 at the first concert in the MagniFest concert series. (Photo by Joe Aquilante)

The Mustard Seed, a newly formed band of four Catholic teenagers from the Phoenixville and Chester Springs areas — all active in music ministry at their parishes — opened the concert. Jack Ringenbach, a keyboard player and student at Bishop Shanahan High School in Downingtown, said the band is named after the parable told by Jesus in the Gospel of Matthew (4:30-32).

Ringenbach enthusiastically described the band as small but hoping to have a big impact.

“A lot of us are involved here (at St. Mary’s) and that’s what makes it special,” said Sean Springer, 18, of Phoenixville. Springer sings and plays guitar in the band and has attended youth retreat programs at St. Mary’s Retreat Center.

Although new to songwriting, Coppa said her music is inspired by her own life experiences, “digging through old journals” to tap into themes of heartbreak and humor from her youth as she discerned God’s plan for her life. She is also inspired by “talking to God candidly” in her prayer life, she said. 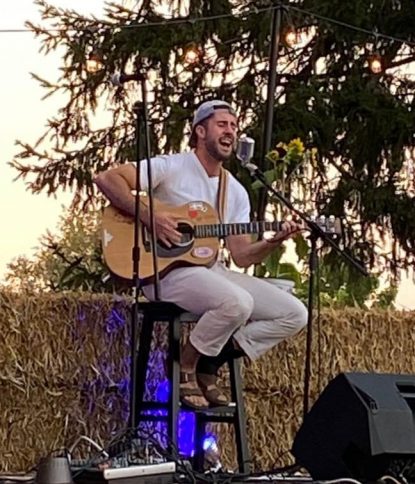 Singer/songwriter Jack Terzian performs his acoustic-rap style of music that “tells the story of his faith journey.” (Photo by Gia Myers)

Singer/songwriter Jack Terzian, who grew up in St. Katharine of Siena Parish in Wayne, performed his acoustic-rap style of music that tells the story of his faith journey.

“Music freed me from the demons in my life,” Terzian said, describing his experiences while enrolled at Loyola University in New Orleans, studying in the College of Music and Media.

“I was living a sinful lifestyle, being visited by the devil all the time,” he said.

This changed when Terzian started attending Mass again, and he “saw clarity.”

“This initial openness was a door for the Lord to come in,” he said, adding “I knew I was worth more. God took the desire away from me for drugs and alcohol.”

Terzian also started attending eucharistic adoration and he experienced new insights. “I fully understood the truth of life,” he said. “I felt (the Lord’s) overwhelming mercy, and how much he loves all of us.”

It was then that Terzian experienced “an overflowing river of peace,” he said, and ever since his mission has become sharing his experience of redemption through God-given gifts and talents.  He draws from his own life experiences to express the Gospel’s message in a modern way.

The final performers of the concert were Pawel Machura, a guitarist and music therapist at Children’s Hospital of Philadelphia, and Randall Tan, who works for the Culture Project International, where he invites young people to join as missionaries.

Machura has written songs about St. Joseph and the experience of Christian life, but also enjoys playing jazz, blues and rock cover songs.

His wife, Kate Capato, is one of the artisans participating in the festival and her sacred art will be available at MagniFest on Aug. 14.

Together, Machura and Capato say they are on a mission of spreading truth and beauty through art and music to help people enter deeper relationships with God. 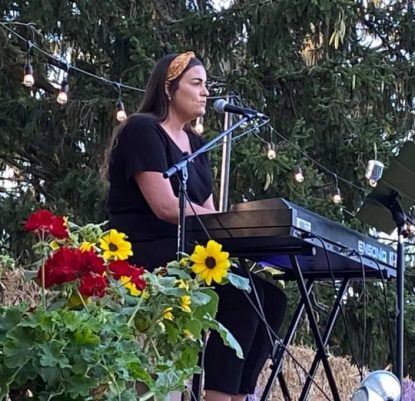 The final concert in the series celebrates the Aug. 14 Vigil of the Feast of the Assumption and includes a talk by Transitional Deacon Andrew Lane on the life of St. Maximilian Kolbe — known for his profound devotion to Mary — at 7 p.m., followed by the performance of a song about Kolbe, written and performed by local singer/songwriter, Gus deSimone.

Mass for the Vigil of the Assumption will be celebrated at 7:30 p.m. by Father Stephen DeLacy, archdiocesan vicar for Faith Formation with Youth and Young Adults.

Tickets can be purchased for $10 per person, ages 8 and over, at the event’s website and at the event for $15 per person. For special youth group pricing, email magnifest@stmaryprov.org.

PREVIOUS: New program helps future priests ‘get the word of God out’ in perfect English

NEXT: ‘Biking for Vocations’ takes call to priesthood on the road