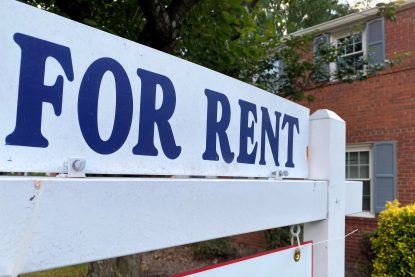 A “For Rent” sign is seen in Arlington, Va., June 8, 2021. The U.S. Supreme Court rejected the Biden administrations ban on evictions Aug. 26 amid the coronavirus pandemic. (CNS photo/Will Dunham, Reuters)

CLEVELAND (CNS) — A national eviction moratorium that protected millions of Americans who have fallen behind on rent payments is unconstitutional, the U.S. Supreme Court ruled.

In a 6-3 opinion announced late Aug. 26, the court’s conservative majority agreed with a coalition of landlords and real estate groups who challenged the extension of a moratorium put in place by the Centers for Disease Control and Prevention.

The decision raised concerns among advocates of affordable housing. They called for state and local governments to speed up the distribution of $46.5 billion in federal emergency rental assistance funds made available in response to the coronavirus pandemic.

“The sad piece of this is that only 11% of the money allocated by the government for eviction mitigation has been accessed. I don’t know where it’s getting hung up,” Dominican Sister Donna Markham, president and CEO of Catholic Charities USA, told Catholic News Service Aug. 27.

In a news release Aug. 25, the U.S. Treasury Department said about $5.1 billion — which is 11% of the allocated funds — had been distributed to 1 million vulnerable households by July 31.

“So our work is going to need to really focus on helping our diocesan directors access their state funders for this and also provide whatever support we can within limits. We don’t have all kinds of money,” she said.

The National Association of Realtors welcomed the ruling.

“This decision is the correct one, from both a legal standpoint and a matter of fairness. It brings to an end an unlawful policy that places financial hardship solely on the shoulders of mom-and-pop housing providers, who provide nearly half of all rental housing in America, and it restores property rights in America,” the association said.

In its unsigned opinion, the court said the CDC did not have legal authority to issue a moratorium despite the needs of millions of people who are delinquent on rent payments.

“It is indisputable that the public has a strong interest in combating the spread of the COVID–19 delta variant. But our system does not permit agencies to act unlawfully even in pursuit of desirable ends. It is up to Congress, not the CDC, to decide whether the public interest merits further action here.”

The opinion said the federal government’s interpretation that under a pandemic existing law “would give the CDC a breathtaking amount of authority … is unprecedented.”

The court’s three liberal judges dissented, saying that quickly ending the moratorium was unnecessary as the pandemic expands.

“The public interest strongly favors respecting the CDC’s judgment at this moment, when over 90% of counties are experiencing high transmission rates,” Justice Stephen G. Breyer wrote in an opinion, which was joined by Justices Elena Kagan and Sonia Sotomayor.

The court ruling was the second in two months on a nationwide eviction moratorium. The court determined June 29 in a 5-4 ruling to leave the original CDC moratorium in place with Justice Brett Kavanaugh casting the deciding vote.

Kavanaugh wrote in a concurring opinion that his decision was made solely because the moratorium was set to expire July 3, and that the remaining time would “allow for additional and more orderly distribution” of emergency rental assistance funds appropriated by congress.

He also wrote that he believed Congress would have to pass new and clearer legislation to extend the moratorium.

Congress has not acted in the interim.

Pressured by members of Congress, the Biden administration called on the CDC to develop a new moratorium. The agency did, declaring Aug. 3 a moratorium in areas of the country of high coronavirus transmission. The order covered about 90% of U.S. counties.

In its statement, the realtors association said landlords choose eviction as a last resort. It called on housing providers and tenants to collaborate to seek the assistance that is available as swiftly as possible.

NEXT: Catholic church in New Orleans is emergency shelter during Hurricane Ida