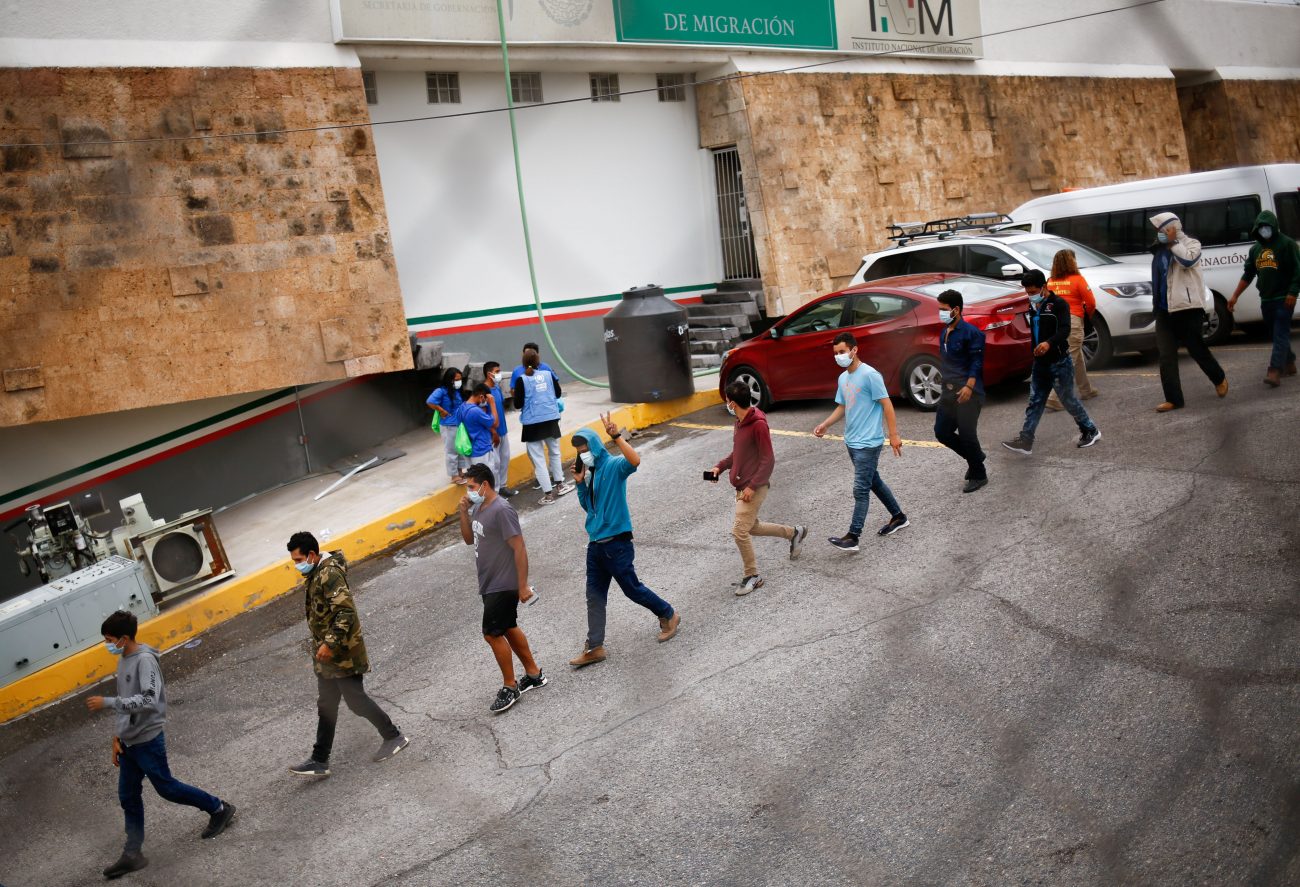 Migrants in Ciudad Juarez, Mexico, who were expelled from the U.S and sent back to Mexico under Title 42, line up outside the National Institute of Migration building Aug. 13, 2021. U.S. District Judge Matthew J. Kacsmaryk in Amarillo, Texas, ruled the same day that the Biden administration must revive a Trump-era policy requiring immigrants seeking asylum to wait in Mexico while their applications are processed. (CNS photo/Jose Luis Gonzalez, Reuters)

AMARILLO, Texas (CNS) — U.S. District Court Judge Matthew Kacsmaryk in a ruling late Aug. 13 blocked Secretary Alejandro Mayorkas of the Department of Homeland Security from implementing a June 1 memo in which he formally ended the Trump administration’s Migration Protection Protocols, known as MPP or the “Remain in Mexico” policy.

Kacsmaryk, a judge of the U.S. District Court for the Northern District of Texas, whose jurisdiction is the Amarillo division, stayed his decision for seven days to allow the Biden administration to file an appeal.

His 53-page ruling came in a lawsuit filed by Texas and Missouri. In it the judge said that in terminating the policy, the Biden administration had violated the Administrative Procedure Act, a law that dictates what procedures agencies must go through to implement certain policies.

An earlier challenge to this memo, filed by the states of Texas, Missouri and Arizona, was dismissed by the U.S. Supreme Court June 21.

“CLINIC staff and volunteers have accompanied and provided legal counsel to thousands of men, women and children who sought safety at our doors, only to be stranded in Mexico in inhumane conditions through MPP,” she said in an Aug. 14 statement. “They desperately waited for protection and admission to one of the richest countries in the world, in increasing danger, by design of the U.S. government.”

“Jesus said, ‘Whatever you did for one of the least of these brothers and sisters of mine, you did for me,'” she said, and called Kacsmaryk’s decision “contrary to man’s law and God’s law.” It “must be overturned,” she added.

“We now call on President Biden to act on his faith and once again, end this policy that is so contrary to our values and who we aspire to be,” Gallagher said.

Under the Migration Protection Protocols, first implemented in 2019, asylum-seekers were returned to Mexico to await adjudication of their cases. Critics of the policy said these migrants regularly faced dangerous and inhumane conditions in Mexico.

In his ruling, Kacsmaryk, an appointee of President Donald Trump, said the states of Texas and Missouri are being harmed by Biden’s reversal of the policy because when migrants are released into the U.S. they are using health care services and because their children must be enrolled in U.S. schools, they are straining educational resources.

He also said that in his memo, Mayorkas did not acknowledge the rise in border crossings. According to The Texas Tribune, U.S.-Mexico border apprehensions for the fiscal year surpassed 1 million in June.

Texas Attorney General Ken Paxton said in an Aug. 14 statement that “dangerous criminals are taking advantage of the lapse in law enforcement and it’s resulting in human trafficking, smuggling, a plethora of violent crimes, and a massive, unprecedented burden on state and federal programs for which taxpayers must foot the bill.”

He said Biden must act to end the “lawlessness” he said is destroying our communities.

The Texas attorney general’s office tweeted: “ANOTHER VICTORY! We just won our second immigration lawsuit against the Biden Admin! They unlawfully tried to shut down the legal and effective Remain-in-Mexico program, but #Texas and Missouri wouldn’t have it. Together we sued, and just handed Biden yet another major loss!”

NEXT: Washington Archdiocese offers practical steps to care for creation