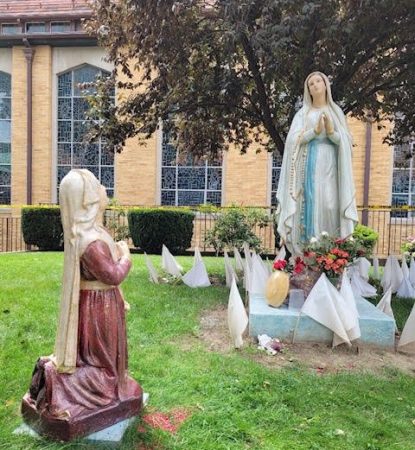 A vandalized statue of St. Bernadette, left, is seen outside St. Michael’s Catholic Church in the Queens borough of New York City Aug. 17, 2021. Damage was done to the left forearm and wrist of the statue, which was newly installed and dedicated at the church in the Brooklyn Diocese. (CNS photo/courtesy Diocese of Brooklyn)

The incident occurred at about 3:30 that morning when a man jumped over the church fence and knocked the statue over, according to a diocesan news release. The damage to the statue was in the area of its left forearm and wrist.

The statue of St. Bernadette and a statue of Our Lady of Lourdes were dedicated earlier this summer in remembrance of all parishioners who lost their lives to COVID-19.

“St. Michael’s plays a central role in the faith and care of our neighbors through our Masses and faith-based services that feed the hungry,” said Father Vincentius Do, pastor of the parish in the New York borough of Queens.

“For sure this act of vandalism is upsetting, but the faithful of St. Michael’s and I are praying for the person who committed this act against our church,” he said. “It is important to find the good in all things, and so I wish to take this opportunity to encourage the public to respect our church and our property, as well as that of all houses of worship.”

The 109th Precinct of the New York City Police Department was investigating the vandalism. Father Do was already planning to have the statue repaired. 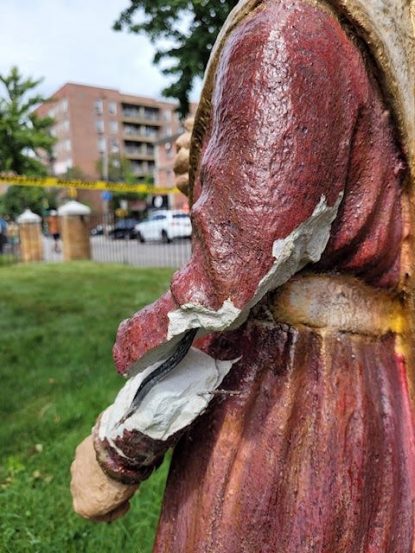 A vandalized statue of St. Bernadette is seen Aug. 17, 2021, outside St. Michael’s Catholic Church in the Queens borough of New York City. The statue was newly installed and dedicated at the church in the Brooklyn Diocese. (CNS photo/courtesy Diocese of Brooklyn)

St. Bernadette is the patron saint of the poor, the sick and those ridiculed for their faith.

Exactly a month before the Flushing church’s statue was damaged, two religious statues displayed outside Our Lady of Mercy Catholic Church in the New York borough of Queens were destroyed in an act of vandalism in the early morning hours.

The damaged statues included one of Mary and one of St. Therese Lisieux, known as “the Little Flower.” A news release from the Diocese of Brooklyn said the statues were dragged 180 feet from the church across 70th Avenue, where they were smashed with a hammer.

Earlier in the week, on the evening of July 14, the statues “were toppled over but were not damaged,” the diocese said. “The individual involved in both acts of vandalism is believed to be the same person.”

Other church property in the Brooklyn Diocese has been the target of vandals, including the grounds of the diocesan administrative offices in the Windsor Terrace section of Brooklyn.

In another case, a crucifix on the property of St. Athanasius Catholic Church in the Bensonhurst section of Brooklyn was toppled and damaged in the early hours of May 14.

New York police May 22 arrested a 29-year-old Brooklyn man, Ali Alaheri, in connection with that crime and an arson the week before. He was charged with one federal count of criminal mischief as a hate crime.

Similar incidents also have taken place in the Archdiocese of New York, including outside Our Lady of Mount Carmel-St. Benedicta-St. Mary of the Assumption Church on Staten Island. According to Catholic New York, the archdiocesan newspaper, a vandal destroyed statues of Our Lady of Mount Carmel and the Sacred Heart of Jesus outside the church in the early hours of May 15.

A week later, Cardinal Timothy M. Dolan of New York offered a prayer of invocation and reparation at the church.

At least one organization, the New York State Ancient Order of Hibernians, has taken New York City Mayor Bill de Blasio to task for not publicly condemning what it called a “rise in hate crimes targeting Catholics.”

“The mayor has been very quick to publicly and rightly condemn acts of faith targeting other faiths,” James Russell, the organization’s Catholic action chairman, said in an Aug. 11 statement. “However, we cannot help but notice the disturbing, deafening silence from the mayor concerning these heinous acts of hate targeting Catholics.”

“We urge our members to contact Mayor Bill de Blasio and let him know that there can be no tolerance for acts of hate targeting people of faith, nor can there be a double standard of outrage,” Russell said.