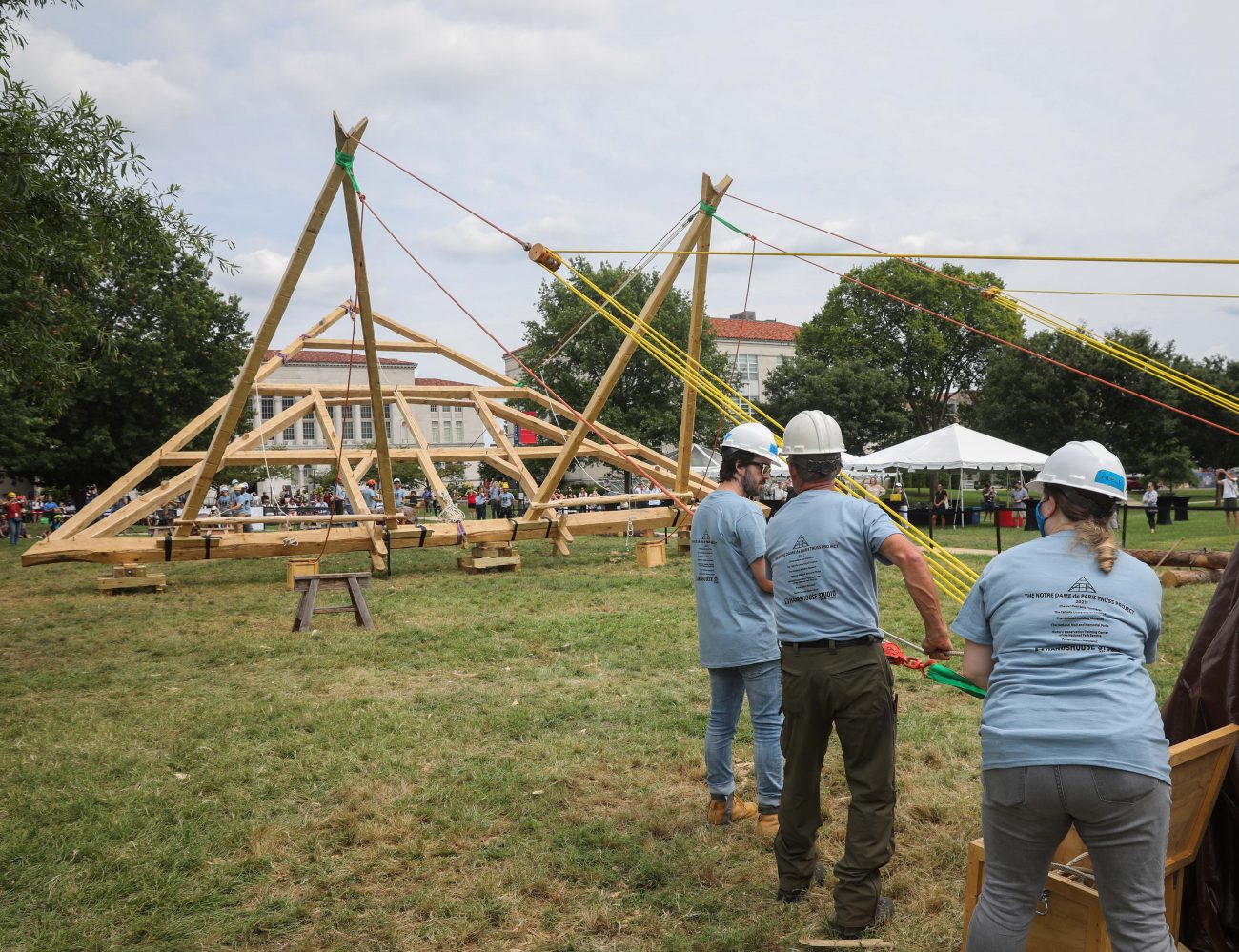 A team of students, carpenters, architects and crafts people gently pull a truss into its vertical position on the lawn of the mall at The Catholic University of America during an Aug. 3, 2021, ceremony. The truss was designed to replicate one that was destroyed when Notre Dame Cathedral in Paris went up in flames in April 2019. (CNS photo/Andrew Biraj, Catholic Standard)

Eventually, burned roof sections collapsed in the Gothic landmark that was finally completed in 1345 after nearly 200 years of construction.

A little more than two years after the disaster, in the shadow of a landmark Catholic shrine in the nation’s capital, teams of architects, carpenters, artisans and students — joined by one cardinal — slowly and gently pulled on rope lines to raise a painstakingly crafted roof truss that may help guide the builders who will replace Notre Dame’s roof.

The event Aug. 3 on the grassy mall of The Catholic University of America, with the Basilica of the National Shrine of the Immaculate Conception as a backdrop, was part of a collaboration to research, model and build a historically accurate full-scale version of Truss No. 6 from Notre Dame.

After months of preparation, the campus played host for two weeks to a 75-person crew that took logs transported from the mountains of Virginia, cut them into timbers and assembled the truss using tools and techniques employed nearly a millennium ago.

The project was modeled after a similar effort by the organization Charpentiers sans Frontières, or Carpenters Without Borders, which built a version of Truss No. 7 in 2020 to demonstrate that the traditional methods of carpentry are possible today as the cathedral is rebuilt. Twenty-five primary trusses support the main section of the cathedral’s roof.

Cardinal Wilton D. Gregory of Washington and Catholic University’s chancellor, wore a hardhat as he joined the raising ceremony. He first blessed the crew and then lined up with them to help hoist the 35-foot-high truss into its upright position on the lawn.

During a brief program afterward, Cardinal Gregory offered his gratitude to the people who came from across the country to volunteer on the project. In his prayer, he asked the gathered crowd to focus not just on the burned structure in Paris, but to remember the people “who make up the living church.”

The completed truss was disassembled, trucked across town and raised in public a second time on the National Mall Aug. 5. It then will be placed in the National Building Museum for display for at least several weeks. 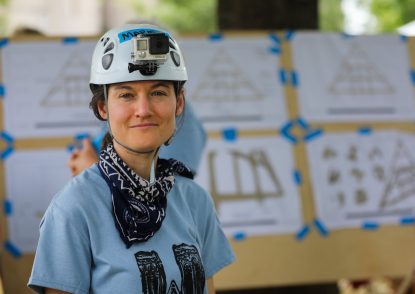 Marie Brown, executive director of Handshouse Studio, is pictured in an Aug. 3, 2021, photo. In partnership with the School of Architecture and Planning at The Catholic University of America in Washington, Handshouse organized the Notre Dame de Paris truss project, which reconstructed a truss like one destroyed in an April 2019 fire that engulfed the Notre Dame Cathedral in Paris. (CNS photo/Andrew Biraj, Catholic Standard)

Marie Brown was among those who watched the fire in 2019, stunned. Before the flames were even extinguished, she was on the phone, strategizing about how to help rebuild it with others connected to Handshouse Studio, which she leads as executive director.

The Massachusetts-based educational nonprofit that organized the project in Washington leads “adventurous hands-on projects … as a way to illuminate history, understand science and perpetuate the arts,” according to its website.

Handshouse founders Rick and Laura Brown, Marie Brown’s parents, and its board members, volunteers and friends pulled together the project. It involved working with Catholic University’s School of Architecture and planning and university staff.

At the university, Tonya Ohnstad, interim associate dean for graduate students in the School of Architecture and Planning, took the lead with 14 architecture students who worked on the truss as a class. “After a year of online classes, this was a way to get their hands back into making something,” she said.

One student, senior Michael Matthews, said after working on small-scale models in a wood shop, he was happy to take on the physical labor of using an ax to chop logs into the assorted pieces needed.

“The first two days I was exhausted,” he said. “My back hurt.” To be fair, Matthews is a bit older than typical undergraduates, having spent 20 years in the Army before enrolling at CUA, he explained.

Student Eddie LaPointe said he enjoyed using axes to fashion the logs as he learned about timber framing.

“I can’t speak for everyone, but I think for CUA students the project was significant because it was a completely new experience for all of us, and it was a culmination of everything we learned in the class made full scale in real life,” LaPointe said.

Rob Duarte, a Handshouse board member, explained that the project went beyond simply recreating a historical piece of architecture for the sake of recreating it.

As an artist, Duarte said that understanding the how and the why of the techniques used to build the cathedral trusses “tells us a lot about how it was originally built, the history of architecture, about medieval architecture and specifically roofs.”

For instance, he learned that woodcrafters of centuries ago would cut logs during certain phases of the moon specifically to account for levels of sap content that varied depending upon the moon’s phase.

The quest for accuracy in the project meant that down to the smallest detail, traditional techniques were followed, including that timbers were split on-site using tools and methods that would have been employed by carpenters 700 or 800 years ago.

Marie Brown told the Catholic Standard, newspaper of the Archdiocese of Washington, that “there is a debate ongoing in France as to whether to rebuild Notre Dame as it once was.” Part of the problem with using historical methods, she said, is that “not enough people know how.”

As with the parallel project in France last year, the truss construction demonstration could provide the rebuilders in Paris with a model for how to use medieval techniques, Brown said. “We would be honored if that was the case.”

One final tradition wrapped up the truss raising program. The youngest person on the worksite, Nevan Carling, 20, strapped on climbing gear and climbed to the top, carrying a sprig of cedar of Lebanon that he stuck in the peak.

Carling, a preservation architecture student at the University of York, England, said he was honored to carry out the traditional ritual.

Zapor writes for the Catholic Standard, newspaper of the Archdiocese of Washington. Contributing to this story was Maisy Sullivan. 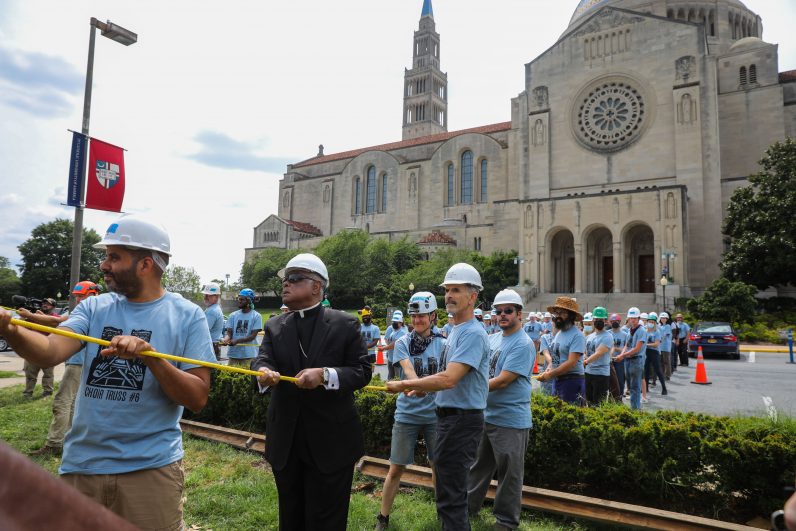 Washington Cardinal Wilton D. Gregory and a team of students, carpenters, architects and crafts people gently pull a truss into its vertical position on the lawn of the mall at The Catholic University of America during an Aug. 3, 2021, ceremony. The truss was designed to replicate one that was destroyed when Notre Dame Cathedral in Paris went up in flames in April 2019. (CNS photo/Andrew Biraj, Catholic Standard)