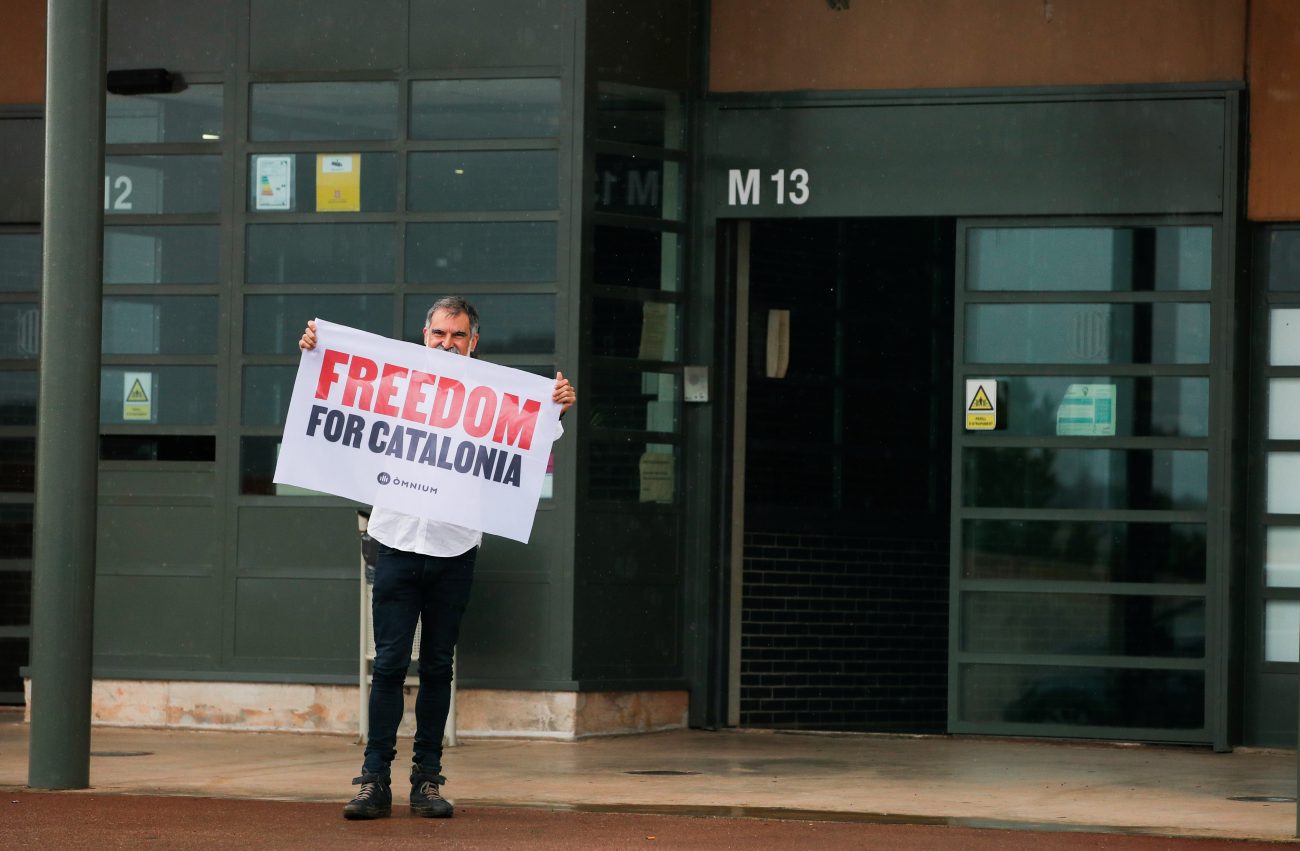 Catalan leader Jordi Cuixart holds a banner in front of the Lledoners prison after the Spanish government announced a pardon for those who participated in Catalonia's failed 2017 independence bid, in this photo taken in Sant Joan de Vilatorrada, near Barcelona, Spain, June 23, 2021. Pope Francis has accepted the resignation of Spanish Bishop Xavier Novell Gomà of Solsona, who has made statements in support of Catalan independence. (CNS photo/Albert Gea, Reuters)

VATICAN CITY (CNS) — Pope Francis accepted the resignation of a Spanish bishop who had made controversial statements in favor of Catalan independence.

The Vatican announced the resignation Aug. 23 of Bishop Xavier Novell Gomà of Solsona. At 52, Bishop Novell was one of Spain’s youngest bishops.

In a statement published shortly after the announcement, the Spanish bishops’ conference said Bishop Gomà “freely presented” his resignation to the pope “for strictly personal reasons” in conformity with canon 401, paragraph 2 of the Code of Canon Law.

According to the canon, a diocesan bishop “who has become less able to fulfill his office because of ill health or some other grave cause is earnestly requested to present his resignation from office.”

“Bishop Novell took the decision after a time of reflection, discernment and prayer, at the end of which he spontaneously presented to the Holy Father his situation and his resignation of the pastoral governance of the Diocese of Solsona,” the Spanish bishops’ conference said.

The Spanish bishop made headlines in 2017 for comments he made after the Catalonia region’s Parliament voted to unilaterally declare independence from Spain.

According to Spanish news site, El Confidencial, Bishop Novell wrote in his weekly column on the diocesan website that if Catalonian independence gets on the ballot, “I’ll go vote.”

“It is not fair that we be denied and impeded the exercise of self-determination,” he wrote in the October 2017 column. Self-determination, he added, “is an inalienable right of every nation; a great social majority wants to exercise it, and it was the first point of the electoral programs of the political parties that won the last regional elections.”

In a November 2017 commentary for the Madrid-based La Razón daily, Cardinal Cañizares, who served as prefect of the Congregation for Divine Worship and the Sacraments from 2008 to 2014, said it was “morally unacceptable” for nations to “claim independence unilaterally by their own will.”

In a separate Nov. 26 interview with La Razón, Cardinal Cañizares said he was “hurt” that many Catalan clergy had backed independence, allowing referendum boxes to be hidden in their churches. He also said he believed Bishop Novell’s support for independence had been confused and untruthful.

“No one can claim a church basis for secessionism,” the Spanish cardinal said. “The independence movement has aroused a hatred which didn’t exist, whereas the church will always work for unity, coexistence and harmony.”

NEXT: Pope invites people to rediscover importance of Sunday liturgy