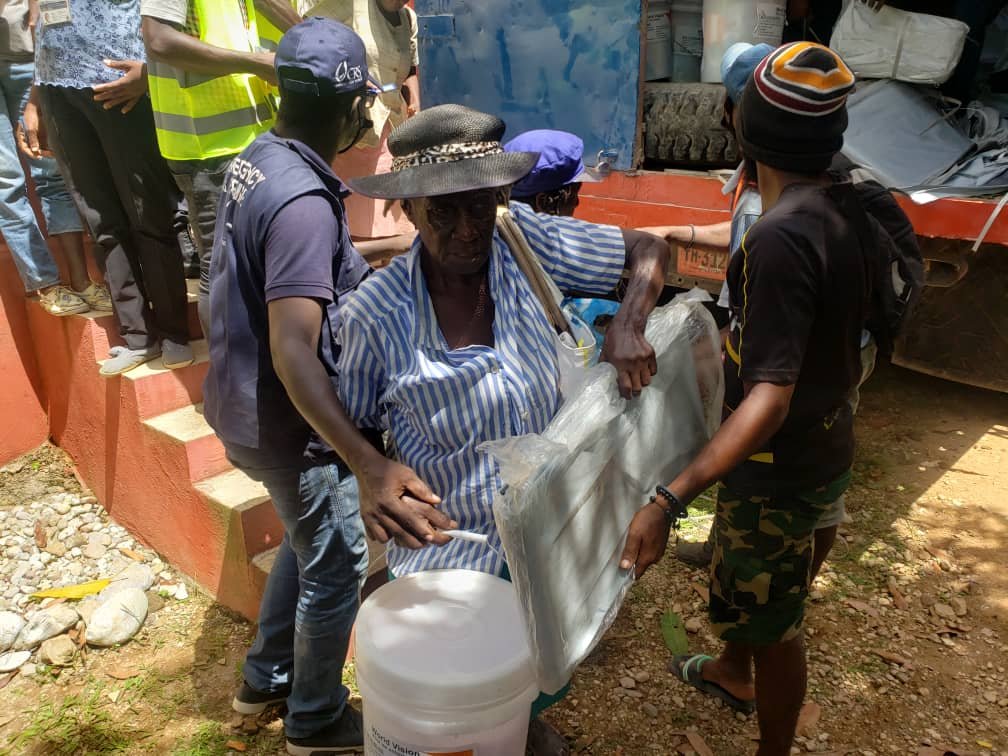 Two weeks after Haiti’s Aug. 14 earthquake, the country’s southwest peninsula is still marked by funerals, aftershocks and a daily search for clean water, food and shelter.

“One of the things that really struck me two weeks out is the number of funerals — everywhere you go there are funerals, as people are burying their loved ones, and it brings a sense of overwhelming grief when that many people pass away; it is very striking,” said Beth Carroll, head of programs for Catholic Relief Services in Haiti.

She spoke with CNS by phone from Haiti Aug. 28, the same day that several funerals were scheduled for family members of at least two CRS staff in the Les Cayes region.

Carroll said that while visiting Les Cayes Aug. 25, an aftershock sent her running out of a building and triggered many others in the area to “reflexively scream and run out of their homes.”

“People were already stressed about the situation in Haiti, and this (earthquake) has caused added stress for people,” she said, referring to the difficult political, economic and social crisis that has been making life in Haiti almost unbearable for the past two years.

The magnitude 7.2 quake killed more than 2,200 and injured more than 12,200 others. About 130,000 homes were damaged, including 50,000 which were completely destroyed, according to Haiti government estimates.

“It is very visible in the affected communities, where 90% of homes, schools and churches were flattened in the hot spots,” said Carroll. “There is also significant damage which is less visible: a lot of water systems are damaged and no longer functioning, or the water is dirty and not usable.”

Staffers of CRS, the U.S. bishops’ international relief and development agency, are operating under tarps at a parking lot near their operations center in Les Cayes following damage to their offices.

Dioceses around the country have held special collections for Haiti at the behest of the U.S. bishops’ conference.

Following the tragedy, CRS has been focused on distributing emergency shelter and hygiene kits in concert with the Haiti government’s thrust to help Haitians rebuild their lives at home and discourage them from relocating to tent cities or sleeping in the streets.

CRS maintains a stockpile of emergency supplies in-country and has embellished its earthquake response resources with goods from the U.S. military along with the U.S. Agency for International Development, the United Nations and World Vision, which works in Haiti but had no presence in the Les Cayes region.

Les Cayes is Haiti’s third-largest city. Carroll said local hospitals and health clinics have done the best they can to treat the injured with their available resources and are moving toward normalcy following the crisis. They also moved many patients to other hospitals in the southern region or to Port-au-Prince.

A major concern in the Les Cayes region is damage to schools and the potential fallout for children, who already have lost significant time in the classroom due to the COVID-19 pandemic and Haiti’s dysfunctional political situation and widespread food insecurity.

“We would really like to see how we can prevent a late start to the school year, and many schools aren’t going to be able to accept children,” Carroll said. “They really can’t afford to miss further class time.”

CRS is also working closely with the local Catholic diocese in Les Cayes as well as the regional office for Caritas Internationalis, which Carroll said recently lost its regional director to COVID-19.

Caritas has “started a very rapid response program, and we are supporting them and doing training with them despite the upheaval of a new (Caritas regional) director, an earthquake and a recent tropical storm (Grace) — and yet they are still out there doing their project,” Carroll said.

She said there is only speculation as to why Haiti has been spared so far from more cases of COVID-19.

“There are a lot of theories, including that the Haitian population is so young, and that people spent a lot of time outdoors in fresh air rather than indoors with recirculated air,” she said.

NEXT: Not all ‘eventualities’ considered in Afghanistan withdrawal, pope says